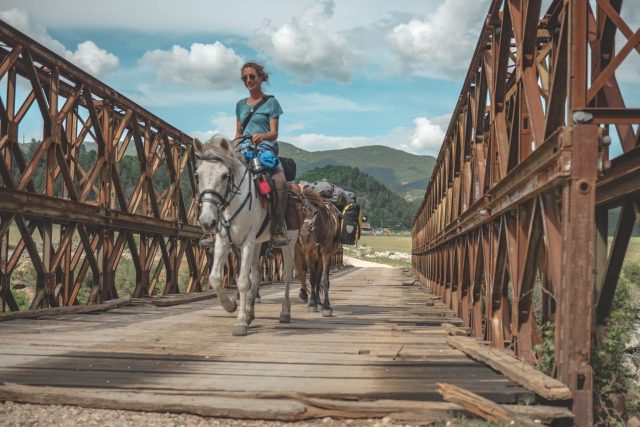 Ashley & Quentin continue their journey along the Trans-Albanian trail. The loss of an essential piece of tack reminds them of the willingness to help of those around them. 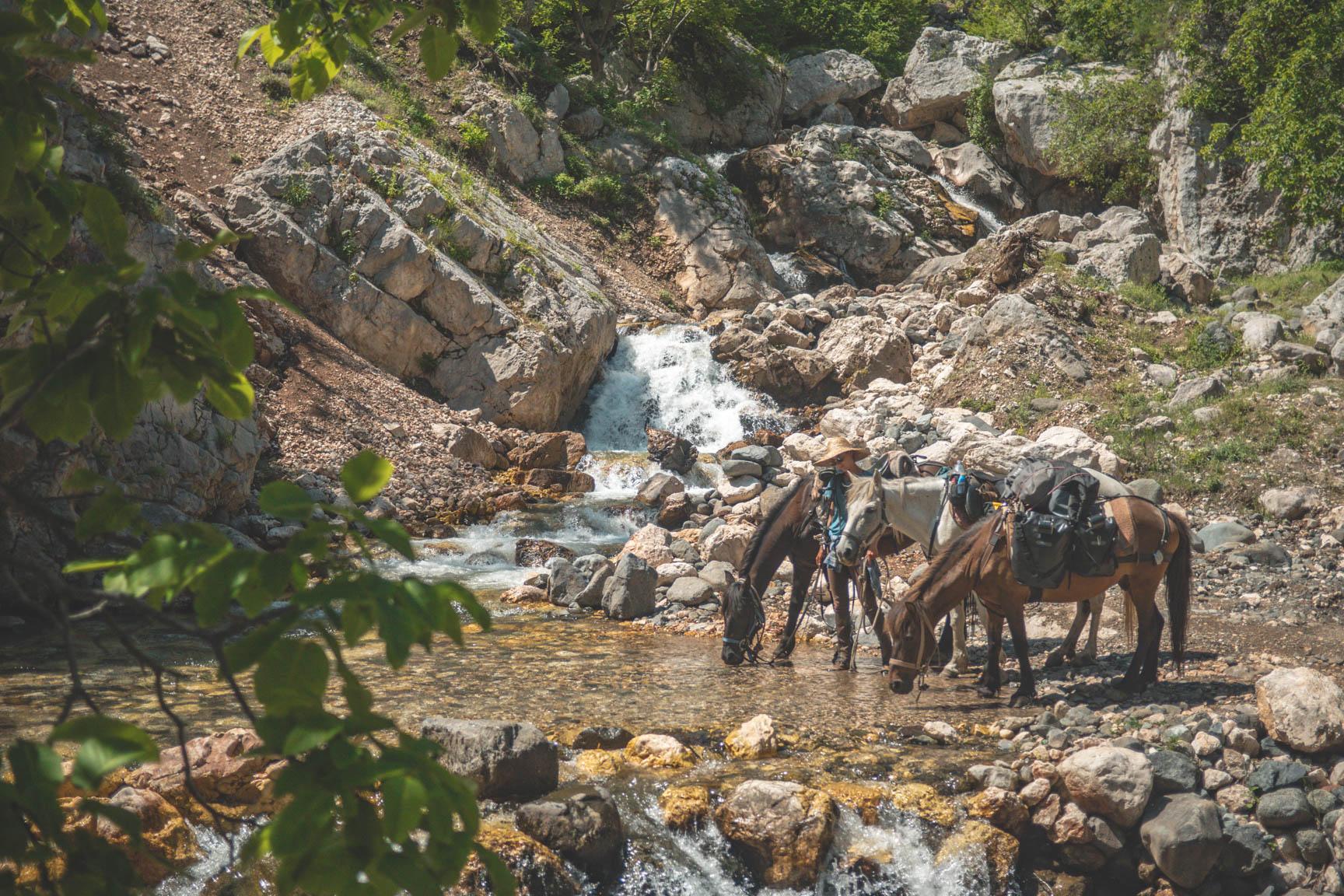 By the riverside we share the most essential moments of the day. Photo by En Selle. 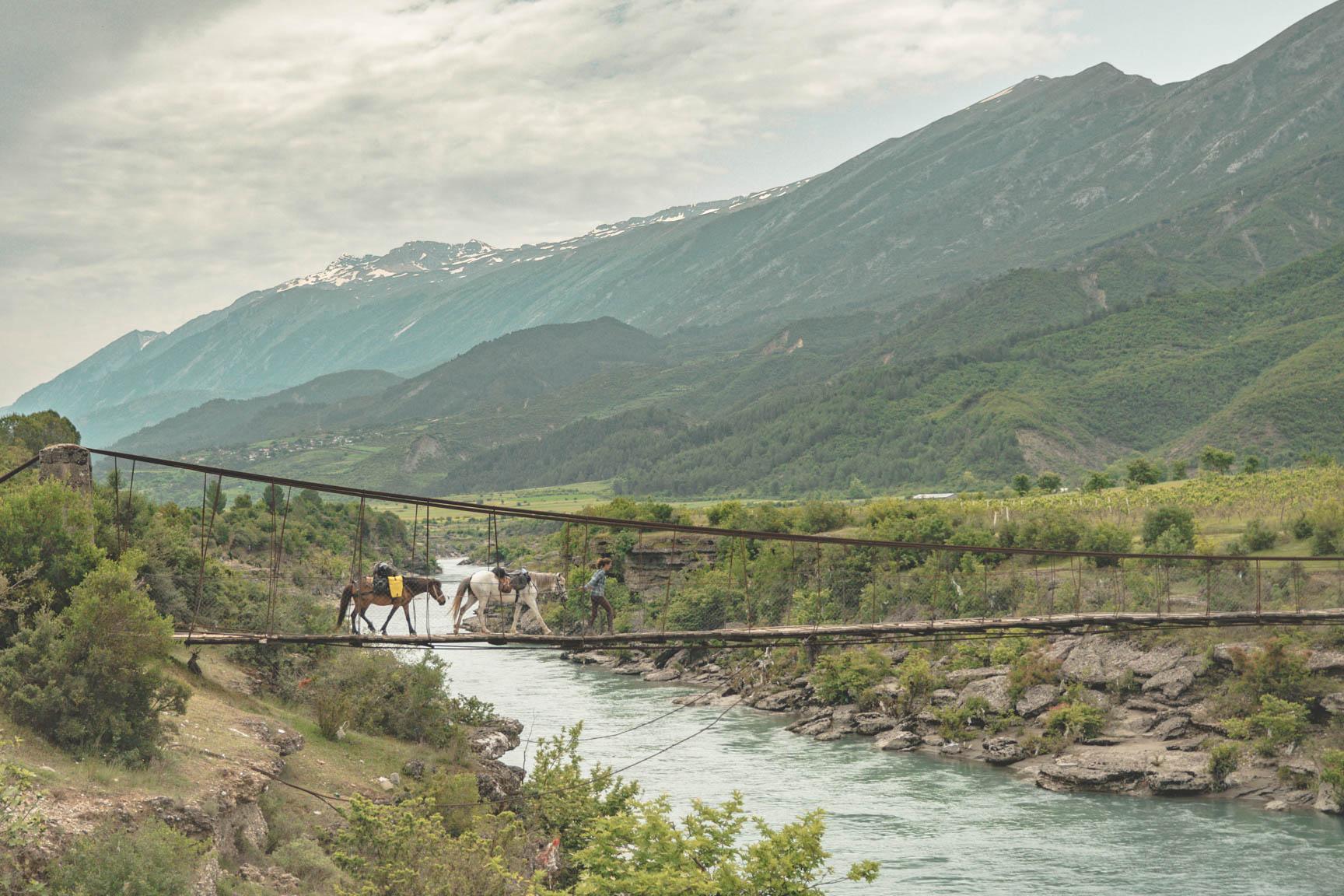 Home to 11 rivers and thousands of tributaries, streams and springs, finding water is not a problem here. Photo by En Selle.

“Did you take your stirrup off your saddle and put in your saddlebag somewhere?” As I asked the ridiculous question, I knew the answer.

We were watering our horses on the Shkumbini river in central Albania when I noticed Quentin’s horse Johnny was missing a stirrup. For the past hour and a half we had been slowly navigating down the “Spathar-Librazhd Road,” about two and half miles and over 3000 feet descent. And now we had to go back up to find the fallen stirrup…

Since our earthquake adventures in the Korce region, we’d covered about 100 miles and changed scenery dozens of time. The past three days had been a sweltering march on the Via Egnatia, a road built in the second century BC by the Romans, running between Istanbul and Rome. In Albania, much of this road has remained dirt track. It runs along the mountainside at about 4000 feet, the altitude protecting us from heat exhaustion. 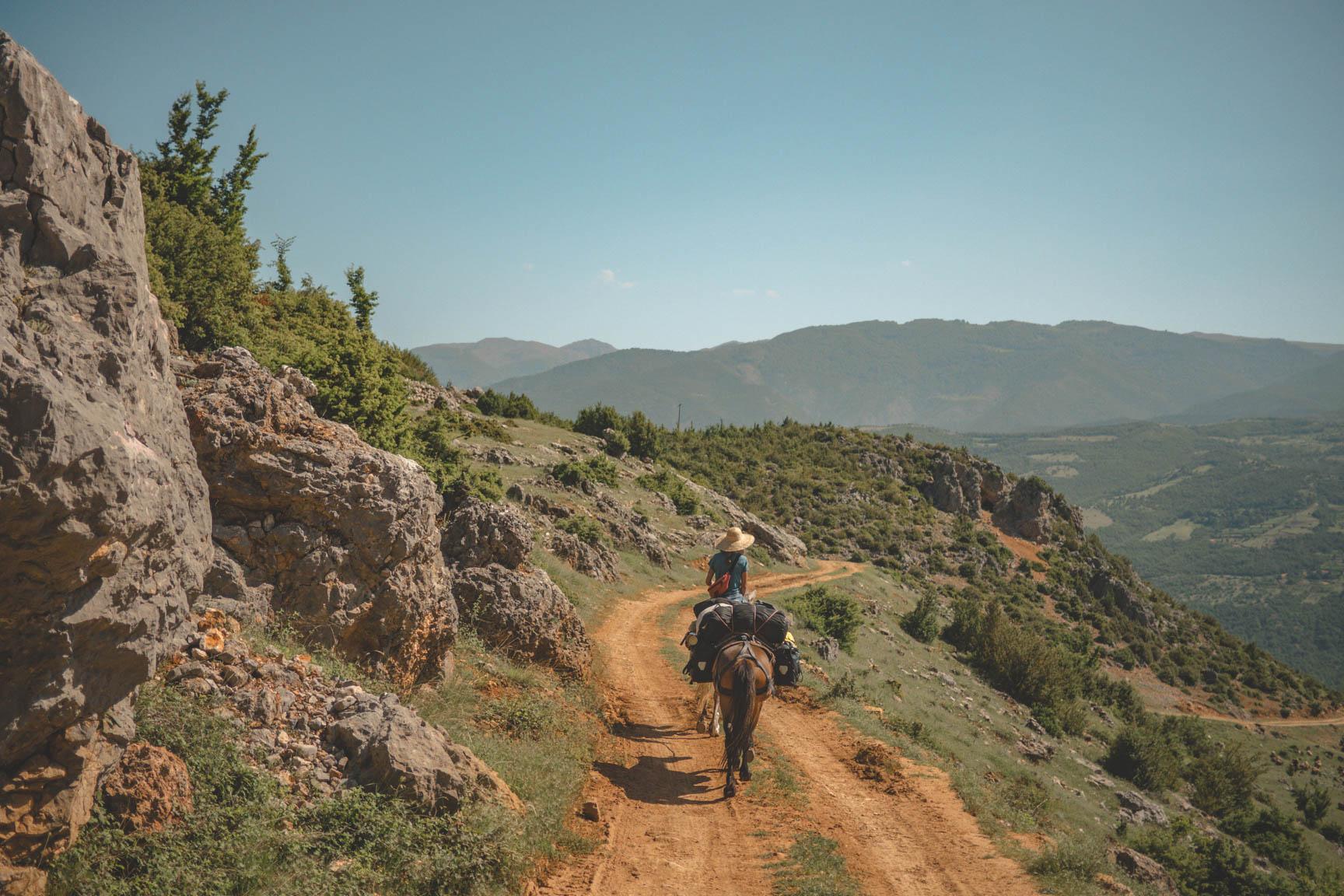 Ochre landscapes and sunshine, the Via Egnatia is a tough but beautiful road. Photo by En Selle. 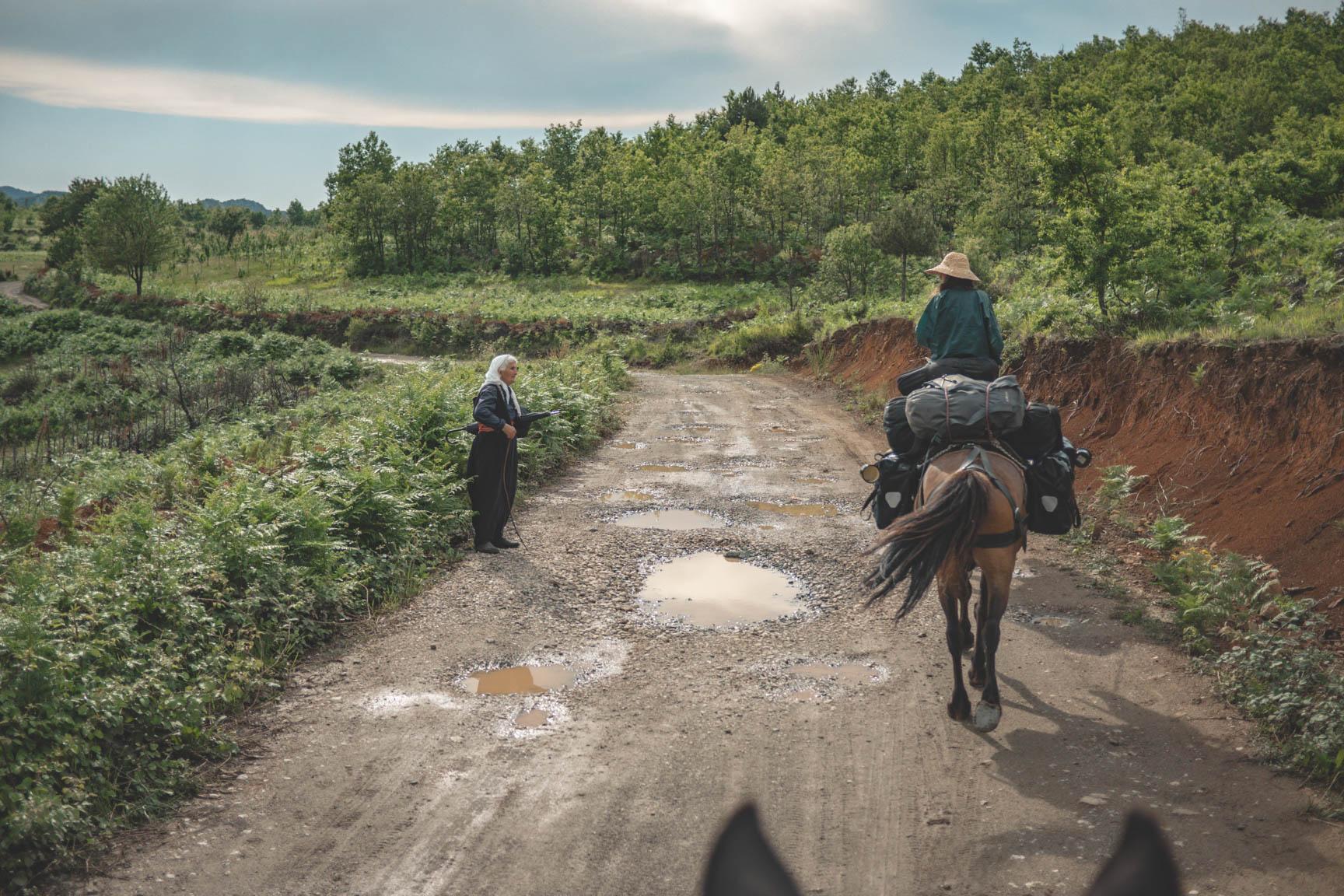 Greetings across the generations. Elderly woman encouraging us on. Photo by En Selle.

Being only five years old, there are many things that can make Johnny jump. A cat in a bush, the water of the spring being too cold, a minibus rumbling past, children waving hello: Johnny’s spooks are innocent but unpredictable.

When I realized at the riverside that one of Johnny’s stirrups had catapulted off somewhere on the road, I mentally listed all the times Johnny had jumped since we had last stepped out of the saddles. He had jumped many times.

Judging from Quentin’s face of pure frustration, and the collective fatigue from the eighteen miles we had already racked up that day, I made the decision to retrace our steps alone on foot while Quentin watched the horses and tried to find lodging for the night. Slinging the second stirrup over my shoulder in the hopes someone would recognize what I was looking for, I set off. The distance was much longer going up on foot. I began trotting up the hill, beads of sweat slowly drenching my t-shirt, my legs becoming heavier and heavier.

As I arrived in each area where Johnny had spooked, I scrutinized the surroundings, looking for that stupid stirrup. The stirrup was not where the minibus had made him rush forward. Nor was it by the cafe where the slam of a door had made him leap. Nor was it at the curve of the road where we had begun walking several hours ago. At the top of the road, the last place it could have been, a flash of red twinkled hopefully on the roadside. Rushing forward, I found a beer can, the same red as the stirrup pad. The realization that the stirrup was really lost hit me and I started crying. In my current state, no tears came out, just a weird wheezing of frustration, fatigue and desperation. Gathering myself, I accepted there was nothing left to do but turn around and run back down. We’d figure out how to replace the stirrup in the morning, probably by borrowing one from a friend in Tirana, some half day’s drive away. 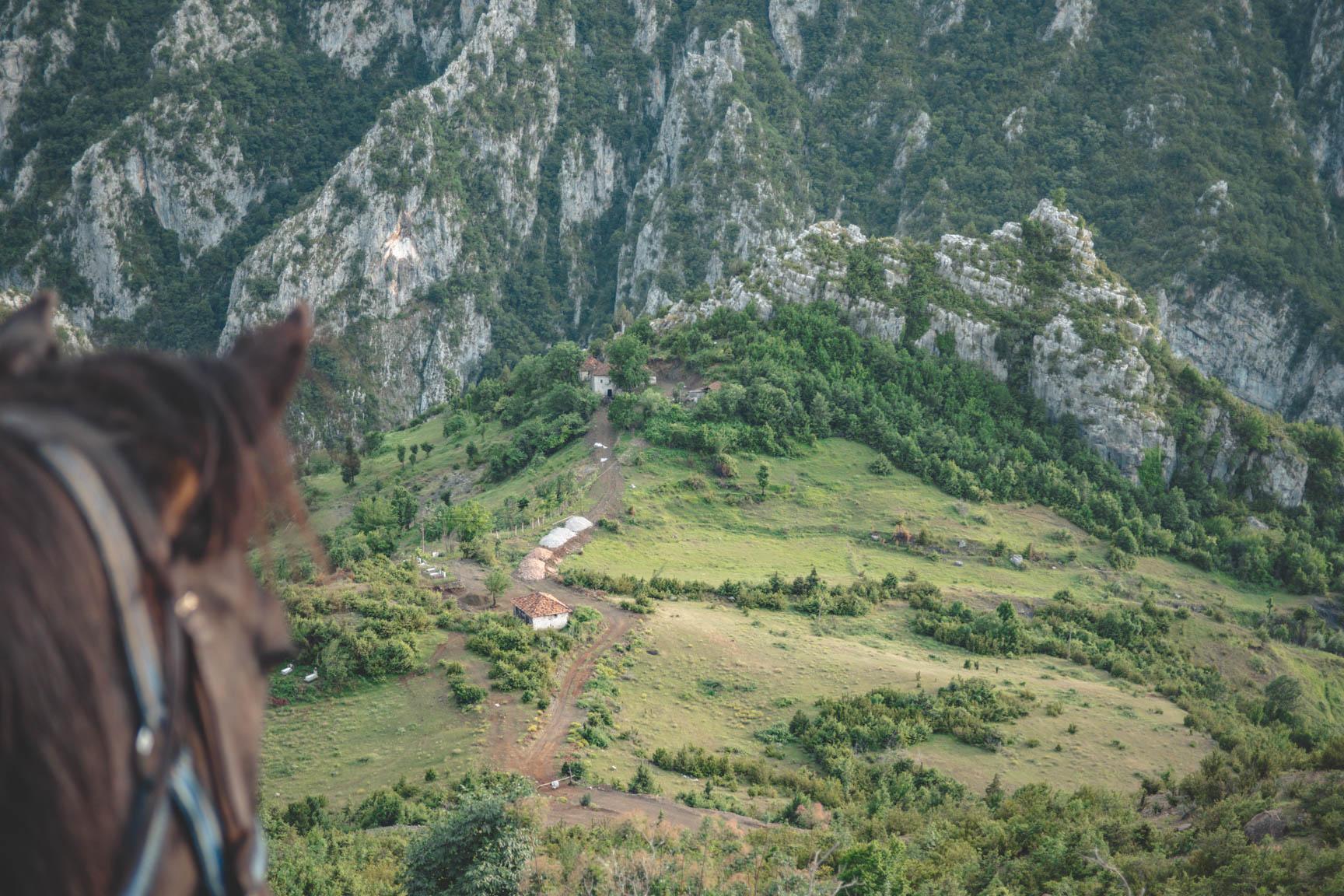 Observing the unknown dangers to come (that will probably make him jump). Photo by En Selle.

Help From All Around

On my way down, a dirt bike crackled up behind me and I hailed it down for a ride. This improved my spirits immensely; I wasn’t frustrated in the least when he stopped to chat for a long time with a man driving his car in the other direction. After a few minutes, the driver peered around the dirt bike man and looked at me.

“Is that girl foreign?”

The car driver thought for a second, pulled out his phone, and shortly handed it to me. To my delight, Quentin’s voice was on the other end.

“Yea, I figured. I tried to call you. Some kid brought me the stirrup back.”

“About a half hour after you left.”

My insides sighed with relief and screamed with frustration at my futile search as I hung up and thanked the man for relaying the message.

That night, Quentin securely closed the stirrup latches on both saddles with thin wire before we tucked into our sleeping bags. We may be horse-trekking amateurs, but we don’t make the same mistake twice! The next time you see us we’ll have completed the trek. That is, if we make it through the Accursed Mountains (yes, that’s really their name!), riding along the borders of Albania, Kosovo and Montenegro. 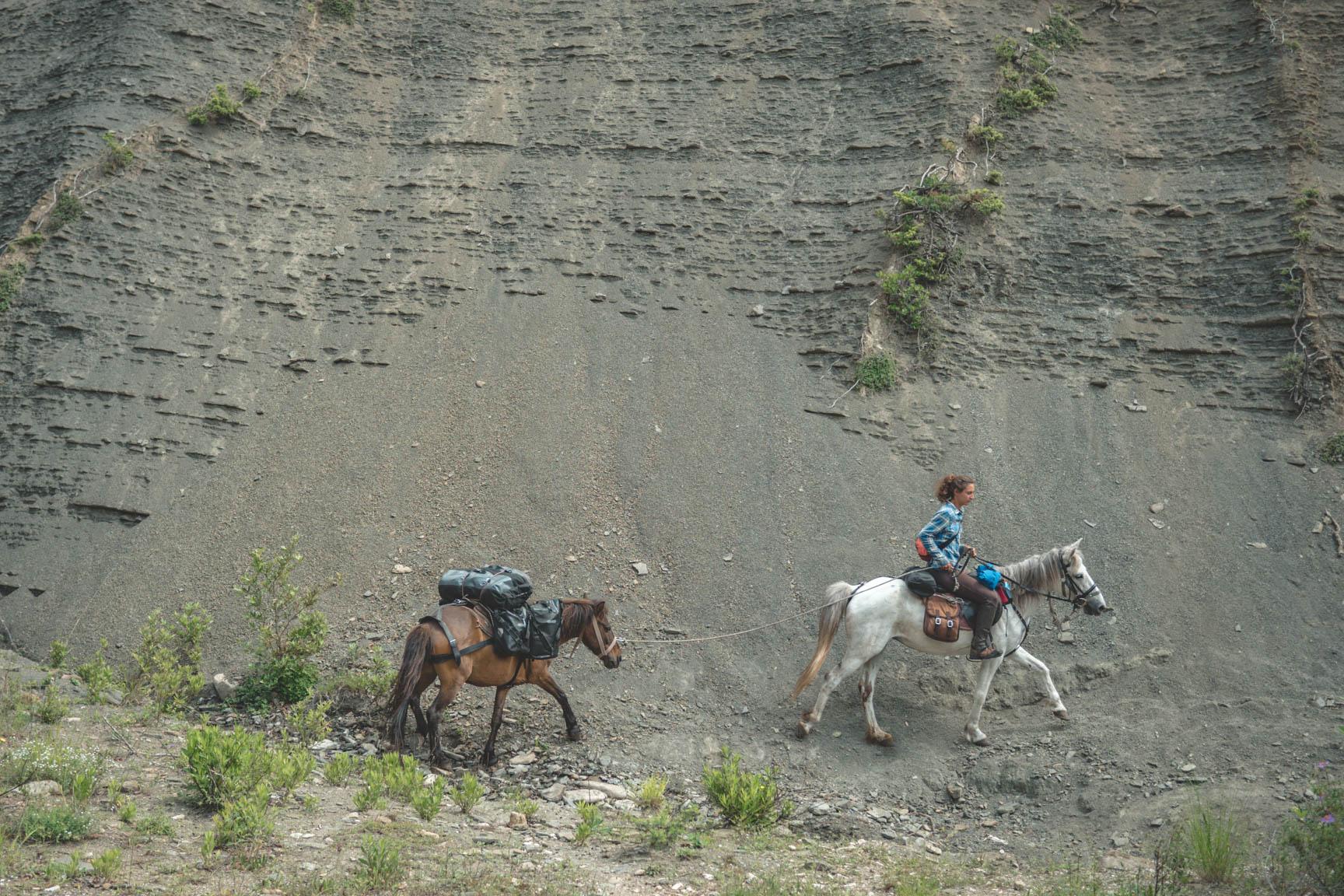 A segment on the Via Egnatia, no more than a goat path. Photo by En Selle. 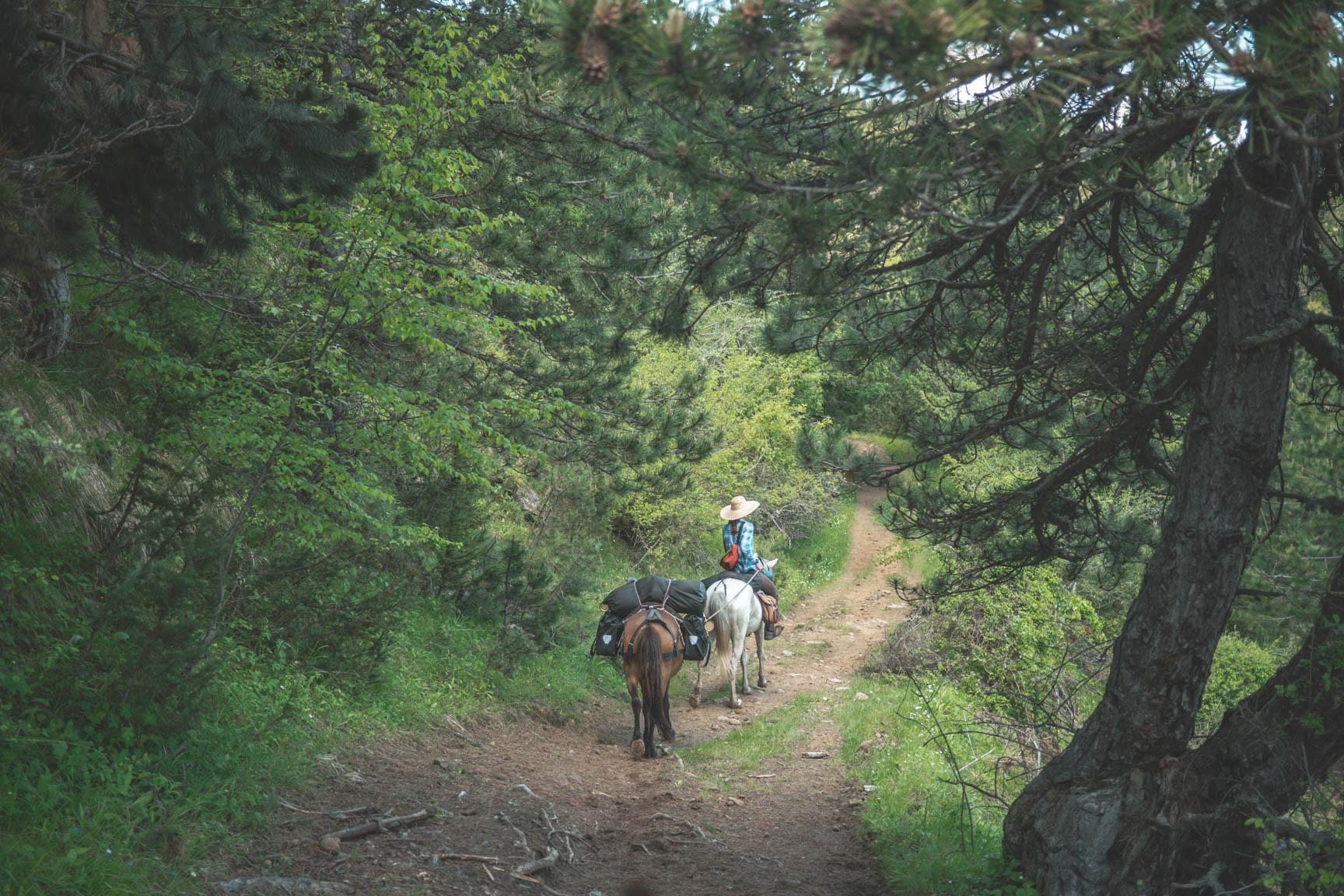 At higher altitudes, the Via Egnatia is leafy green and cool. Photo by En Selle. 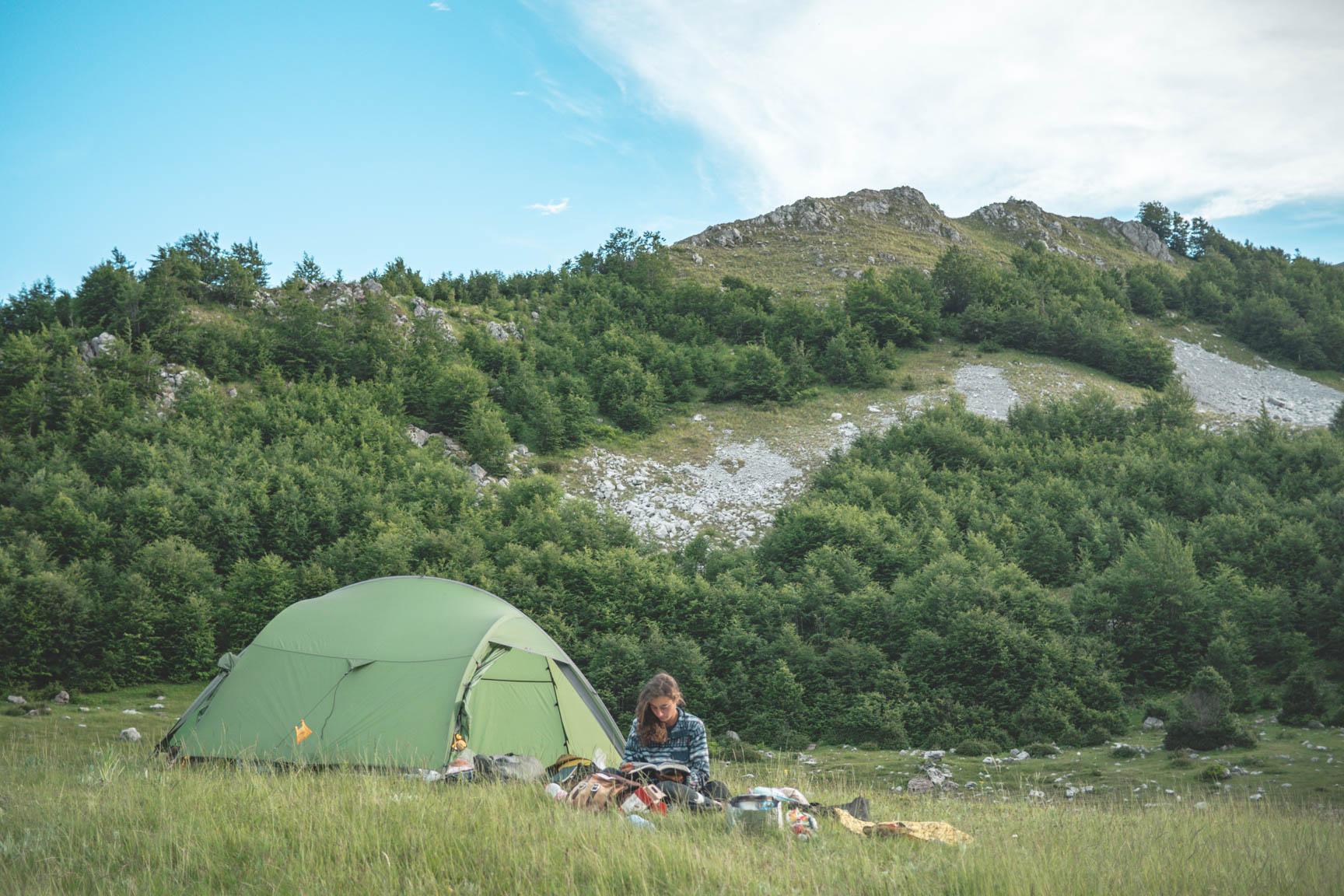