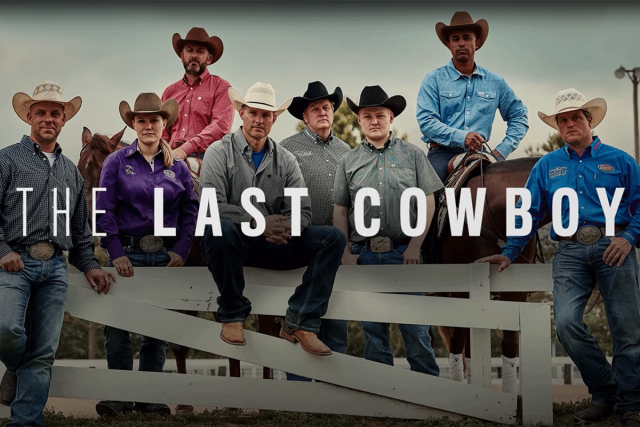 A new documentary-competition series focuses on the high-stakes world of elite horsemanship with a $1 million purse on the line.

From Academy Award®-nominee Taylor Sheridan, writer of “Hell or High Water” and “Sicario,” writer/director of “Wind River” and co-creator of the hit Paramount Network original scripted drama series “Yellowstone,” “The Last Cowboy” puts center stage the real-life men and women who compete on the professional reining circuit – a western-based competition where riders guide horses through a precise pattern of circles, spins and stops – as they prepare for the biggest bout in the sport’s history: “The Run for a Million.” The series chronicles eight reiners determined to elevate and preserve the cowboy tradition as they train and engage in the exclusive, ultra-competitive athletic event.

In addition to executive producing the new unscripted series, Sheridan is also launching “The Run for a Million,” reining’s first-ever, arena-based competition with a $1 million purse, marking the largest in its history. The upcoming experience will take place August 15-17, 2019 at the South Point Arena and Equestrian Center in Las Vegas, and the competition will come to life in the series finale of “The Last Cowboy.”

The elite horsemen and women featured in The Last Cowboy are (in alphabetical order):

Truly Original creates a broad range of scripted and unscripted programming for television and digital platforms. Run by Emmy® Award-winning producers Glenda Hersh and Steven Weinstock, who serve as Truly Original’s co-presidents and CEOs, the company is a subsidiary of Endemol Shine North America.

About Paramount Network
Paramount Network is a premium entertainment destination that pushes the limits of storytelling with bold original scripted and non-scripted series. Inspired by over a century of cinema, Paramount Network is where today’s brightest stars bring the experience of the big screen to every screen with stories that are immersive, inclusive, and deeply personal. A subsidiary of Viacom Inc., Paramount Network has a global reach of 234 million households across 117 countries.