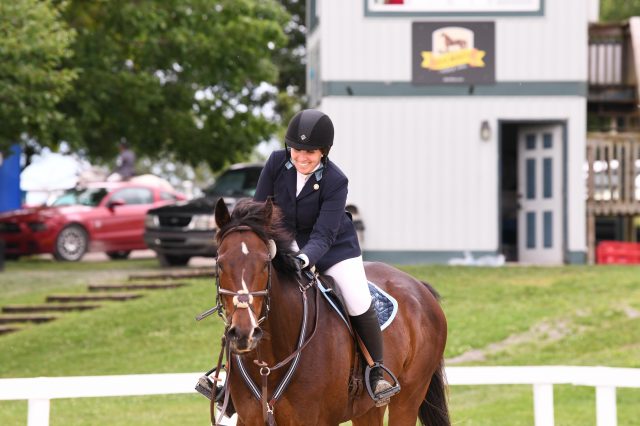 For 673 accepted trainers, the journey to the Retired Racehorse Project‘s 2019 Thoroughbred Makeover has begun! Over the next nine months, three of those trainers will blog their journeys, including their triumphs and their heartbreaks, successes and failures, for Horse Nation readers. Kristen Brennan is back today, sharing some motivation and inspiration about conquering her anxiety in stadium. 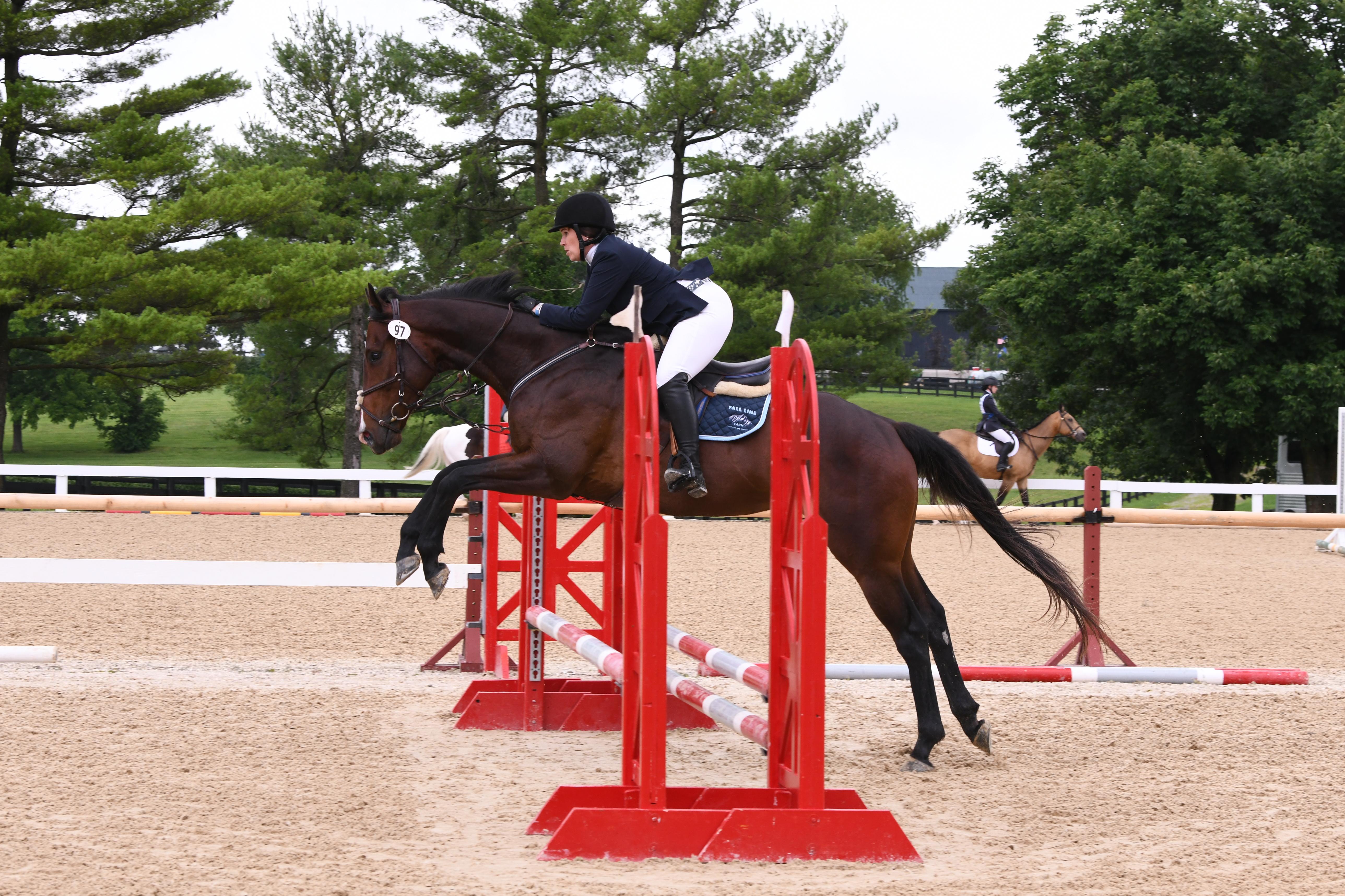 I have been pretty open through this blog series about my struggles with confidence, especially in stadium. Coming from the hunter world, you would think jumping a simple course in the ring would be my and Marcus’s forte. When things clicked, and we were on it, it was. Our stadium rounds looked like equitation courses and I was often met at the gate with a chorus of “Nice round!” and “That was beautiful”. Those flawless stadium rounds left me riding a high that would last all day. But more times than not, something went wrong, and stadium led to our downfall, ripping a top placing out of our hands or worse, landing me a big E, in the matter of less than two minutes.

I began to view stadium as my Achilles’ heel – our one weakness despite all our strengths brought defeat. Dealing with season after season of this brought on some pretty intense anxiety, so one of my biggest goals for 2019 was to work on my confidence in stadium. I was drained from being sick to my stomach from the time I read my ride time until I walked into the ring in. I knew wondering what jump I would fall off at as I walked my course was not healthy. I was weary from the embarrassment that came from fighting back tears in front of everyone in warm up. I was so darn tired of stadium not being fun.

Our first few lessons left me thinking jumping would never be Geoffrey’s time to shine, but over the past two months he has proven me dead wrong. Once he figured out what jumping was all about, he took to it like a fish to water. Each lesson built upon the previous one and, before I knew it, we were tackling skinnies, in and outs, and bending lines. Bright colorful poles? No worries. Funny looking fill? It’s cool. Flowers and planks? So fun. Every jump we jump strengthens my confidence a little bit more and reminds me Geoffrey is a different horse than Marcus (I still love you Marcus, even if I don’t want to jump you anymore). 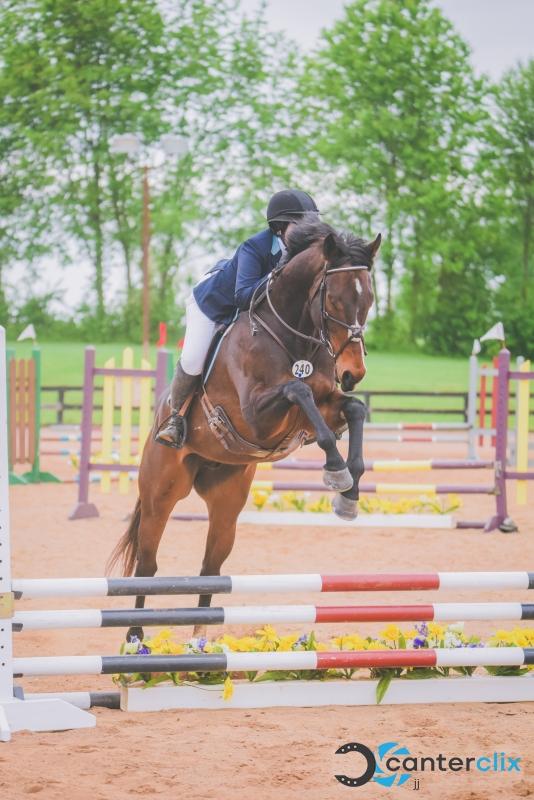 Last month I decided it was time to put this newfound confidence to the test and enter a few shows. Though I was gaining confidence and feeling better, I knew the true test would be how I felt riding a full, maxed out stadium course. He already had proven to me that he was levelheaded at shows and he could pack me around an 18” course. But I decided we needed to get our feet wet over a little bit bigger courses in bigger environments to test my confidence and anxiety. At the same time, we needed to tackle one jumping phase at a time, so I put eventing goals on hold and focused on combined tests.

I entered three to be exact, each a few weeks apart so I had time to recoup or find someone to fix it if all went awry. It was a gamble for sure, but I hoped that it would pay off and each outing would be a more positive experience than the next.

To make it even more of a test to see how far we had come, I picked CTs at three different venues so that each show brought new experiences to see how Geoffrey would react. There was the chaos in the warmup ring and the bright colored flowers under every jump at the Sayre School CT. Meadowlake CT gave us tight roll back turns and maxed out oxers to really put our skills to the test. The Midsouth Pony Club CT was perhaps our biggest test to date. Our stadium round was held in the dreaded Claiborne arena and the last time I was in that ring, I hit the ground in a spectacular fall off Marcus, which resulted in us tumbling from second place to an elimination.

That experience was just another in a long string of issues we had in that arena, leaving me with the feeling that I was jinxed every time I trotted through its ingate. If that anxiety weren’t enough, a concurrent carriage show at the same venue meant pony-carts and four-in hands trotting by the ring non-stop as my number was called. Luckily for me, Geoffrey handled all of these experiences better than I did at times. Were they perfect rounds? No, but there were perfect fences and they were progress and that’s what matters.

At all three shows we jumped around confidently and clean, and as I walked out of the last stadium round of my combined test trifecta, I laughed to myself and whispered, “Hat trick!!!” to Geoffrey. The reference may be lost on most horse people who immediately think, “What does stadium have to do with the tall, dark and handsome Thoroughbred stallion? Weirdo.” But non-equestrian sports fans know that “hat trick” is a term used to describe when an on-fire player scores three consecutive goals in hockey. 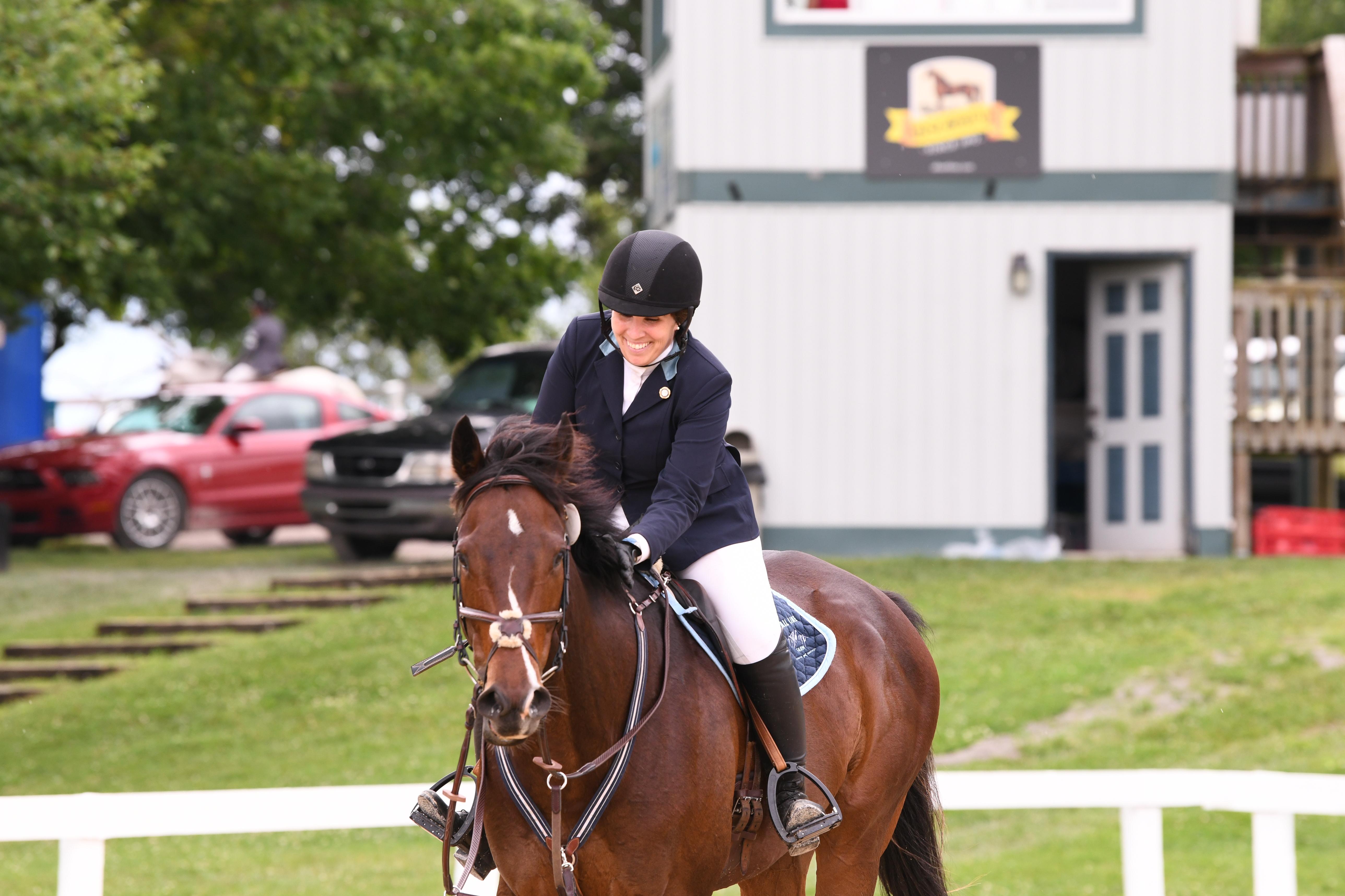 Smiles and Pats after a clear round. Picture by Xpress Foto.

In this case, we may not have had any hats thrown into the ring (what can I say — hockey fans are a bizarre group) after that third clean round, but we celebrated the victory, nonetheless. Not only did we manage to jump three (mostly) smooth stadium rounds without a single jumping fault, but also I began to actually enjoy stadium for once in my life. Geoffrey was just so fun and easy, the only thing I seemed to have to worry about was steering, kicking and hanging on. That hat trick was huge milestone and exactly what we needed at this point in our journey to the #TBMakeover. 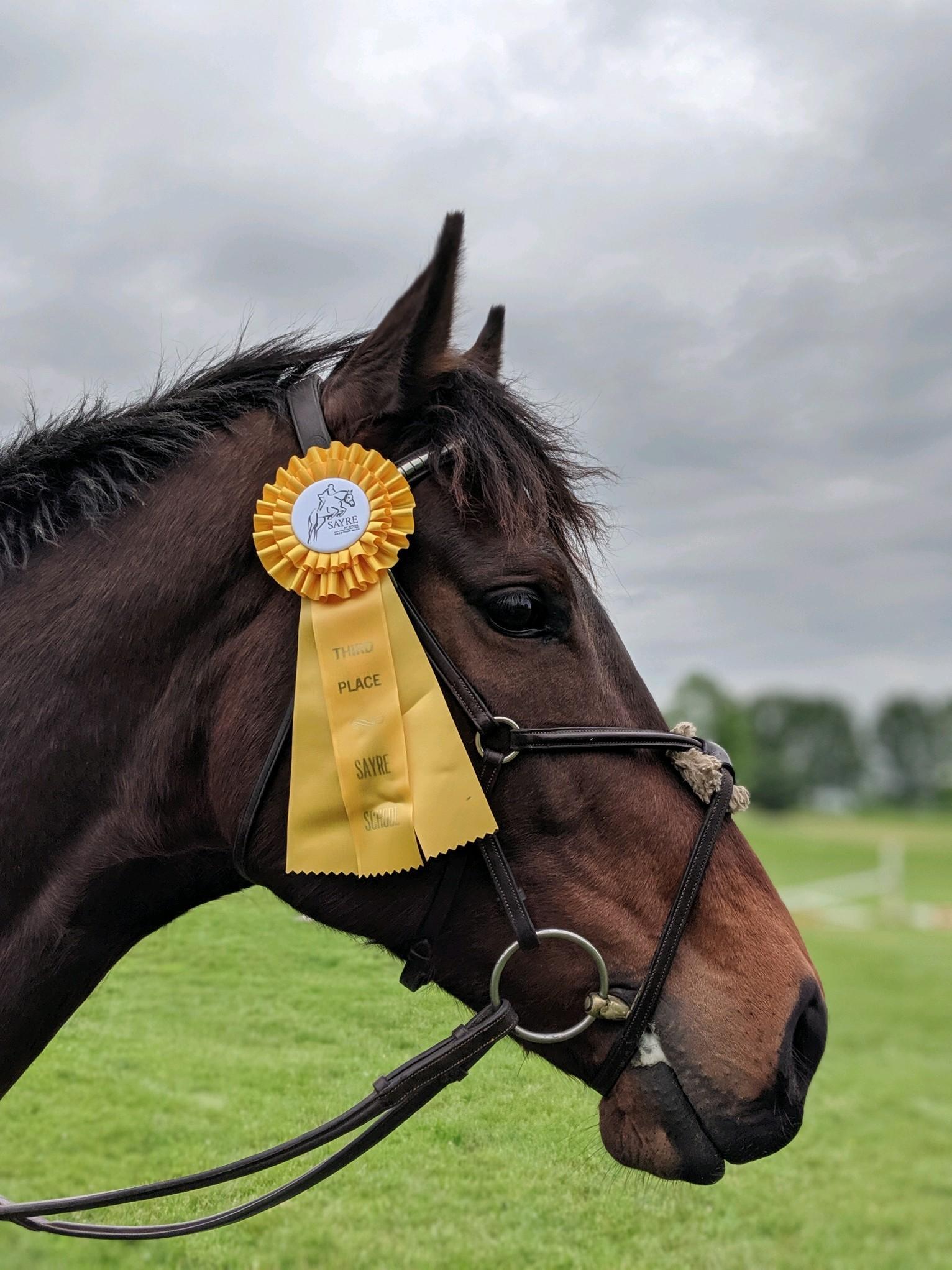