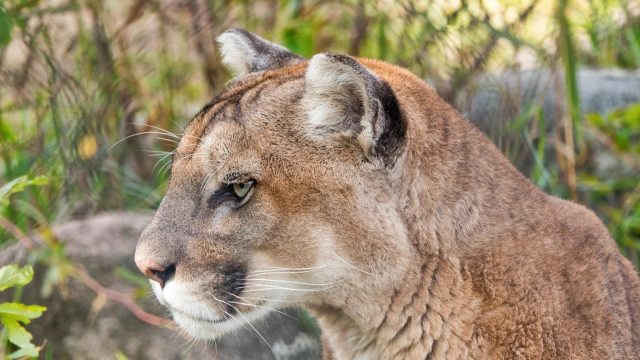 Horse Nation reader Jessica Fox recounts a harrowing brush with a mountain lion while out on a morning trail ride.

A mountain lion was the last thing on my mind that cool, crisp morning. Bathed in sunlight and early-morning shadow, the trail unspooled before Playday and me, begging for a gallop. I gathered the reins, looked ahead, and…saw a sizable animal in the distance.  Maybe it was the unusually large coyote we’d encountered earlier?

Then the creature in question stepped into the sunlight.

Its shoulders moved with sinuous grace and I realized it was less than a football field away. This gave me pause. It was awfully big and kind of close. Playday shifted and shook her head. Why were we stopped? Weren’t we going to gallop? At that moment, the mystery animal turned its body sideways and gazed back at us, twitching its long, elegant tail.

I am a native of the Washington, DC suburbs. Previous to this moment, the largest predator I had ever encountered on a horse or outside of a zoo was a fox. Before me now was a mountain lion.

So this is how it ends, I thought. The only consolation was that I was on horseback. Playday, nonplussed, jigged. Home. She wanted to go home. I also wanted to get away tout de suite. But that was out—I’d read “Little House on the Prairie” as a kid and knew what happened when you ran from a mountain lion. Besides, every predator show on the Discovery Channel made it clear that flight was a bad idea. Yet my pounding heart demanded action.

Should I gallop toward it waving my whip and screaming like a valkyrie? Stay where I was and wait for it to leave? Dismount and walk Playday and myself away? That one was a hard no—as a Pony Clubber, instructors always told me to Never. Get. Off. The. Horse. I considered further. Maybe walk backwards until it was out of sight, then run and, once I had reception, call the barn owner from whom I leased Playday and ask for them to come get me with a trailer? But that just seemed so dramatic.

The mountain lion and I regarded one other. Me, heart pounding, indecisive, and  clutching my whip, the lion twitching its tail lazily.  Finally, it turned and continued to stroll up the wide path, periodically pausing to look back. 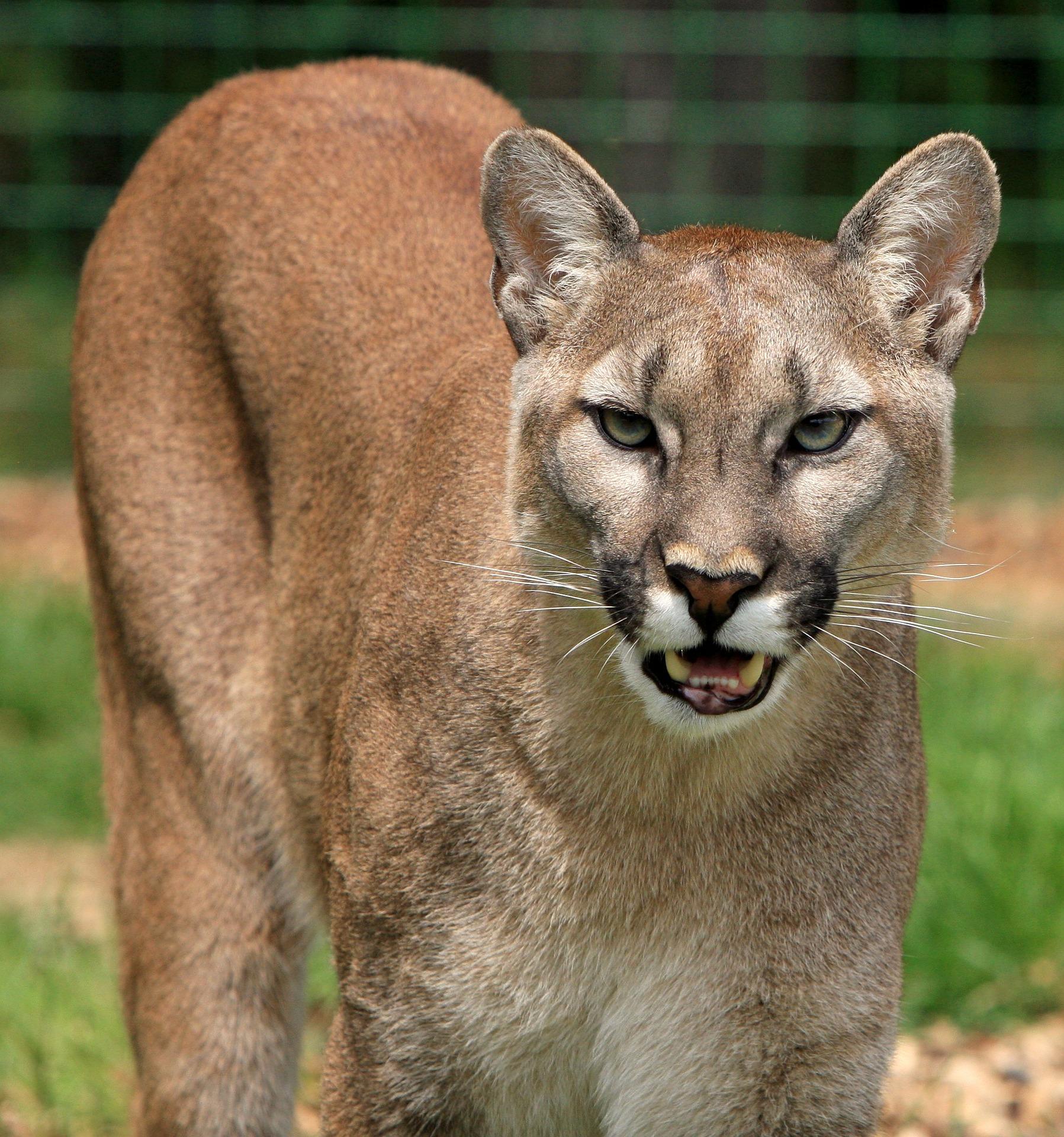 Great. This was the only way home…unless I made like “The Man from Snowy River“ and trail-blazed down a steep incline through ¾ of a mile of poison oak, scrub, and brambles to the nearest road. Poison oak is the worst, and I’d been warned about rattlesnakes. Besides, what if Playday stepped in a gopher hole and snapped a leg? I’d never forgive myself.

At the time, keeping an eye on the danger seemed the best course of action. Thus, Playday and I followed it at what seemed a safe distance. We stopped when it stopped, strolled when it strolled. Eventually, the lion vanished into the brush up the mountain. My hair stood up. What if it was circling back? Don’t be silly, I told myself, it’s more afraid of you than you are of it. For the record, I don’t really believe this, no matter what anyone says. A mountain lion is an apex predator, and I am a woman out on a hack who could make a delicious snack. But, I reasoned, if it were hungry, it wouldn’t be leading me and Playday on a morning constitutional along the trail between North and Main Middle Ranch in Lake View Terrace.

The clink of Playday’s bit was the only sound as I stared ahead at the spot where the mountain lion had been. I can’t live on the trail forever. Also, I reminded myself, Playday had large, hard hooves and I had a long dressage whip. We’d be OK. Right?  We continued on, finally rounding the trail to where lion had slipped off the path. And there it was, so close that I could see the sheen of its canines, the fine texture of its fur, and its amber eyes as it rubbed against a tree like a house cat.

A lion. Playday’s ears swung forward, her head went up, and she prepared to flee. Despite my own adrenaline urging the same, I asked her to please keep walking, and dear, wonderful Playday, she complied. We slid by, eyeing the cat. It paid us no mind. As soon as we crested the hill beyond, I urged my steed to pick up the pace, pronto. She was more than happy to oblige. We made it to the barn in record time. 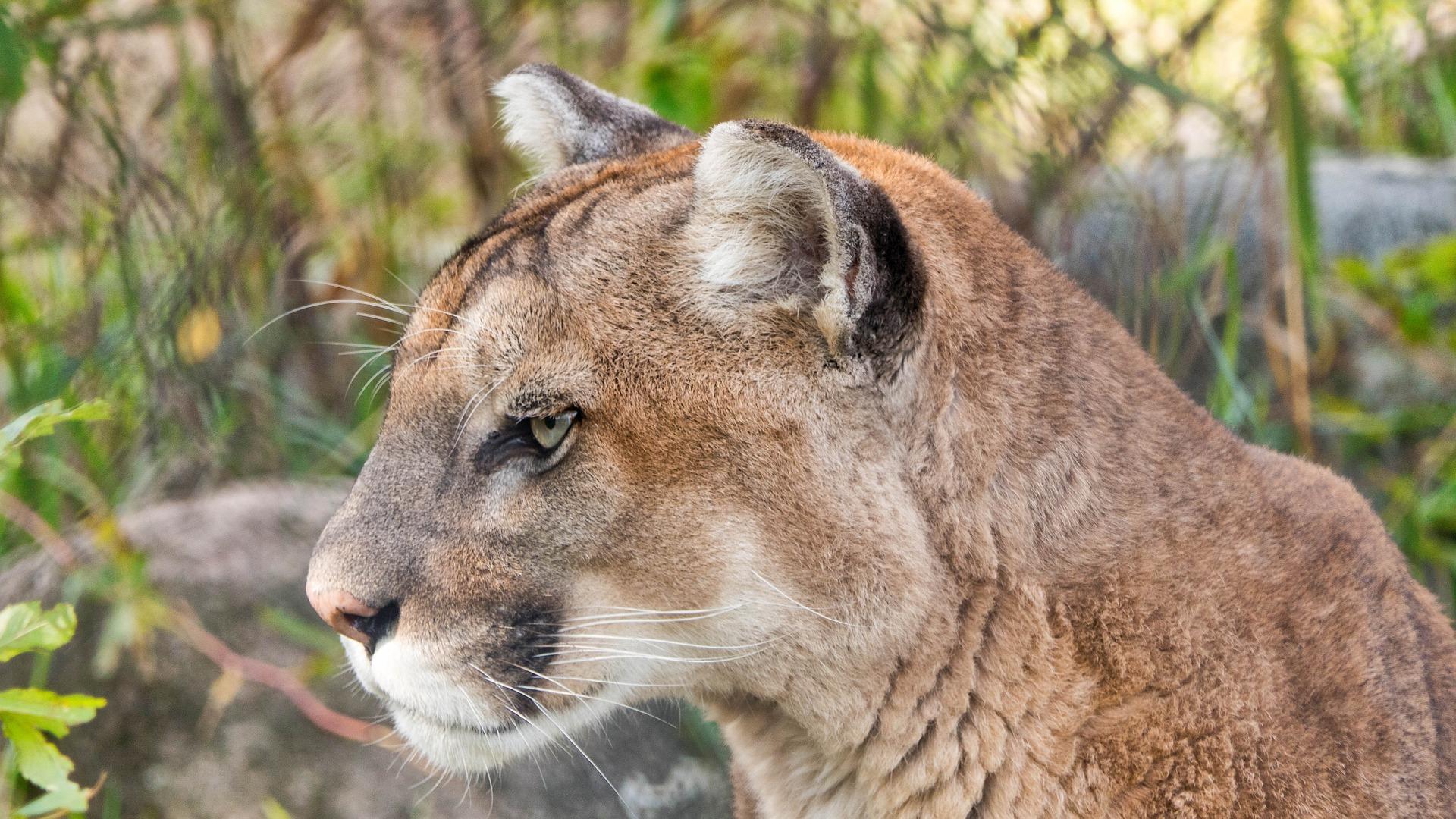 Since moving to Los Angeles,  I’d worried about crossing paths with a mountain lion, but in a distant, never-going-to-happen kind of way. Occasional reports of mauled hikers or trail runners in Northern California sometimes popped up in the news, but for the most part, encounters are rare. Even P22, the lion that lives in Griffith Park—right near Hollywood—rarely makes an appearance to anyone other than game cameras set up by the rangers. I’d met my lion just outside the back gates of Middle Ranch, a large, luxury equestrian facility about a 10-minute drive from the 118 freeway.

A seasoned trail rider might have known exactly what to do. However, I was totally unprepared. Once back at the barn, I learned that a mountain lion is unlikely to attack a 16+ hand horse with a rider unless it’s extremely hungry or young and inexperienced. That running away or dismounting and walking (even backwards) would have been a bad idea. That it would have been wiser to take my chances with the poison oak, brambles, rattlesnakes, and gopher holes. Staying aboard and walking calmly behind it was not the wrong choice—it just was not as safe as detouring altogether.

It was suggested to me that I carry an air horn, bear spray, or a gun. All of those (particularly the latter) seem, in my case, problematic. The spray or an air horn would require me to be dexterous enough to grab said deterrent without fumbling and dropping it. Plus, I’d have to hope that the wind didn’t turn or that my mount wouldn’t launch me up, up, and away. As for a gun, I have zero interest in handling one, training a horse to accept its noise and smell, or investing the time to become proficient.

Instead, I’ve made myself more mindful. Getting caught up in and solely focusing on the experience is a side effect of riding. It happens to almost all of us whether in a warm-up arena or on the trail.  But, that morning taught me that such a myopic approach was not only unsafe but also limiting. Being a competent rider isn’t just about execution, it’s about horsewomanship as a whole.

Now, I make it my business to better track what’s around me, and to be prepared.  I’ve read up on what to do when encountering mountain lions or whatever else might cross my path when not practicing my half-pass. As well as what might when I am.

A freelance writer and lifelong equestrian, Jessica Fox is still trying to figure out how to write and ride at the same time. Until then, she just thinks about riding when she’s writing and writing when she’s riding. You can read more from Jessica at her website, www.foxywrites.com. 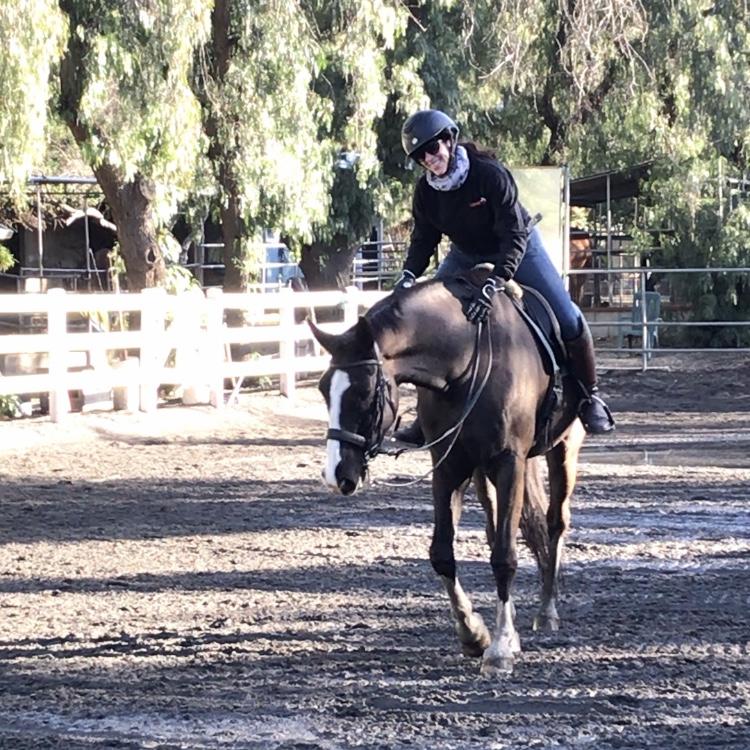