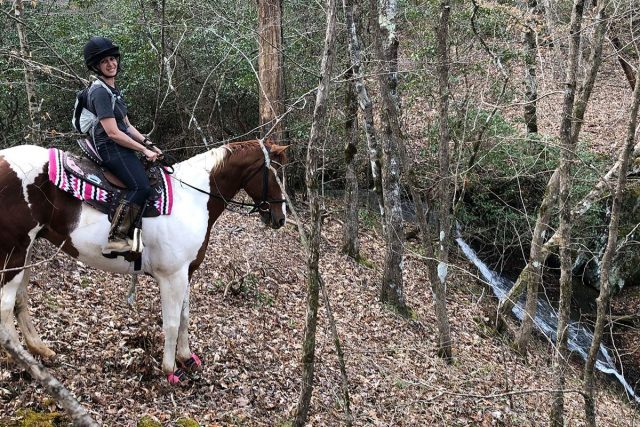 Ainsley Jacobs and her horse JJ brave the wilderness in hopes of finding the ever-elusive waterfall. 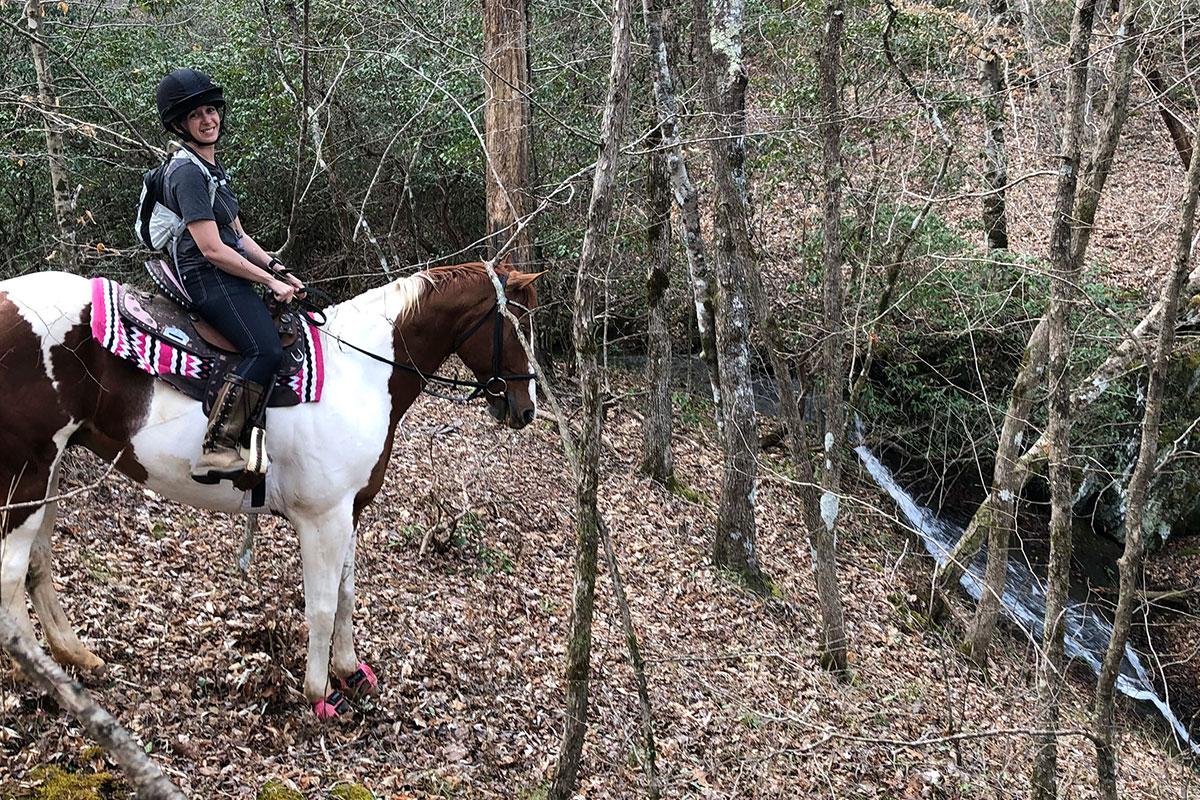 “Nope, that weird water is loud. I’m not going any closer.” – JJ/Photo by Danielle Ayan/Eye-On-Images

Last October, my lesson buddy Mary Campbell of Mare Goods and I went to explore Georgia’s Dawson Forest on our first trail ride with our ponies. Long story short, we didn’t get very far and found out once we wrapped up that there was a waterfall we missed! So, we vowed to come back soon and find The Waterfall.

The insanely rainy winter weather (and our busy schedules) prevented us from getting back to Dawson Forest, but we both were free this past weekend and the forecast showed an ideal “sunny and seventy” scenario for Saturday – perfect trail riding weather!!

Concerned that the rain had washed out some of the trail that was already rutted last year, I posted on a local Facebook group asking if anyone had been lately. Several ladies confirmed the trails had been recently groomed and were in great condition, and one of the ladies who joined team River Birch Farm while we were in Florida recently saw my post and chimed in that she would like to come – the more the merrier!

Last time, I was completely unprepared. We had no idea where we were going, I had no gear, equipment, or water, and it was hot as hell. Fortunately, nothing happened so it was okay. This time, though, I decided to be completely over-prepared. I packed a small hiking backpack (complete with its own hydration system, of course), a hoof pick, pliers, duct tape, a knife, hay string, a lighter, and a granola bar. I also downloaded a map of the trail system to my phone and made sure I had a good (general) idea of where we were going – I wanted to find that waterfall!!

We leisurely loaded up late on Saturday morning and cruised the thirty minutes over to the park. I was SO pumped to try the western saddle I bought last November for more than just giving my friends’ kids pony rides, so I tacked up JJ and hopped on. Previously I had only ridden in it twice for only a few minutes each time, so I was curious to find out how JJ and I would like it for a longer duration.

With Mary and Danielle also tacked up, we started our adventure on the Blue Loop. I passively took point as the guide (since I had the map) and JJ casually designated himself as the lead horse. “Guys! I was literally MADE for this! I know what I’m doing!” -JJ

We had a few trots and a nice little canter and I am happy to report that my new-to-me western saddle is AWESOME! Super comfortable, fits me/JJ great, and the fenders are properly shaped so as not to put strain on my knees.

After about an hour, we came to a big, wide river that the map said we were supposed to cross – except that with all the rain we’ve had, it was waaaay too full and rushing scary fast. Crossing the deep, rapid water definitely wasn’t a good idea, so we begrudgingly turned back. I knew that The Waterfall was somewhere across the river, and was really bummed we weren’t going to find it for the second time. Ugh!

I checked the trail map and saw that we could take a short access road to hop from the Blue Loop over to the Orange Loop so that at least our trek back would be different, and as we were walking up the paved road, I heard the distinct sound of a waterfall! It was totally off in the brush, but I pointed JJ into the woods and up a hill and my four-legged ATV blazed a trail for us.

It was little, yeah, but it was still A Waterfall. Success! Kinda. Whatever. Good enough. 😉

Eventually, we got back to the Orange Loop and started heading home. We encountered another group that was heading out, chatted for a minute, and one lady asked if we had seen The Waterfall. Wait, what?! I had been told it was on the Blue Loop! She said there was one on the Orange Loop, and now I’m convinced that it’s actually Schrödinger’s Waterfall… this thing is everywhere and nowhere all at the same time.

Anyway, we were about half an hour from the trail head and Mary mentioned she was hungry. I realized I was, too, and decided to grab that granola bar I had packed. JJ had been absolutely PERFECT up until then, a total Professional Trail Horse, so I put the reins down for a sec, took my backpack off, and pulled out the granola bar. Big mistake.

As I unwrapped it, it crinkled, and JJ LOST HIS DAMNED MIND. The world was ending, and it was all happening on top of him. Apparently crinkles on the ground = happy treats, but crinkles on his back = imminent death.

I had never really seen him spook like that before, but was so confused by it that I was really mostly just laughing and trying to A) hang on to my backpack (that I had in my lap), B) hang on to JJ so he didn’t get loose and C) stay on! I was suddenly REALLY grateful to have had that big western saddle and its horn to hold on to. I finally got him stopped, although we somehow wound up in a tree, and I hopped off so I could eat my damned granola bar in peace. Jeez.

With the crisis averted, I got back on, stuffed the wrapper in a little pouch on one of the backpack’s straps, and we headed back. And yes, I spent the next thirty minutes randomly crinkling the wrapper as an impromptu “de-spooking clinic” to prevent this from happening again.

We reached the trailers without any other incidents, took care of our horses, and vowed to come back and find The Waterfall once and for all. Third time’s the charm, right?

When in doubt, over-prepare. It’s far better to have something and not need it than to need something and not have it – especially out in the middle of nowhere. Just maybe leave the crinkly-wrapper granola bars at home. 😉