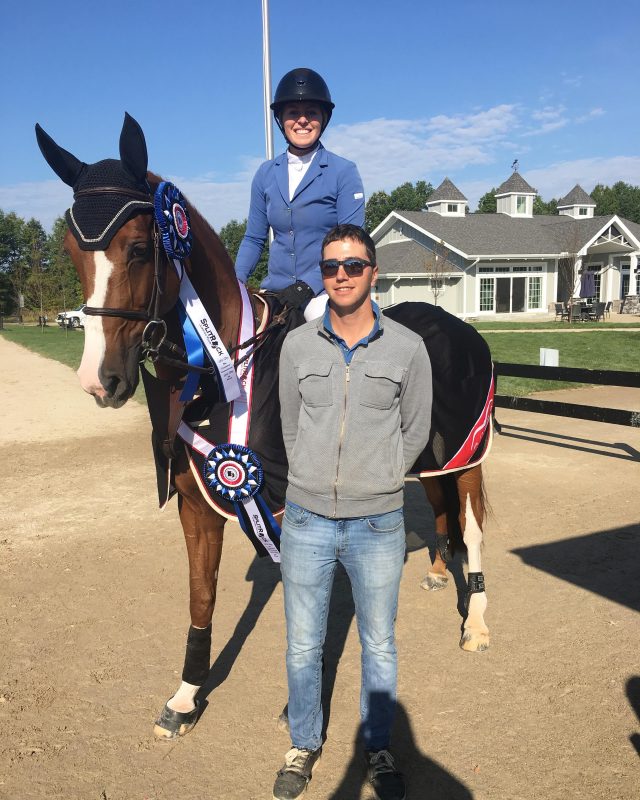 Jumper Nation takes a look back at Kady Abrahamson’s partnership with Charline 28.

There are a handful of horse and rider stories that we hold dear to our heart here at JN. One of those duos is Kady Abrahamson and her own Charline 28. We first caught up with Kady in 2016 following her win in the $25,000 JR/AO Classic at HITS Ocala, and while the focus at the time was on another mount of Kady’s, we got our first real glimpse at Charline 28 in that feature article. Little did we know, but we were seeing the beginning of a partnership that would top the winner’s podium again and again and again. We are gutted to share that the now 14-year-old Mechlinburg mare has had to retire due to an increasingly troublesome bout with Shivers.

Kady acquired Charline 28 from show jumping professional Sharn Wordley in 2016. Their partnership started off beautifully, but Kady and Charline would kicking off a winning streak like no other in 2017. The pair found immense success competing at the Kentucky stop of the Split Rock Jumping Tour and their lucky streak continued as they moved to Ocala for the winter circuit. While Kady admitted that Charline could be a more challenging ride, you couldn’t find a photo of the pair where Kady wasn’t smiling a mile wide while riding the mare. More recently Kady and Charline brought home wins from Live Oak, HITS on the Hudson and the World Equestrian Center. They were always the pair to beat in the U25 divisions and, in addition to their many accolades, Charline 28 was granted the highly regarded Horse of the Year Award in the High AO division both in 2017 and 2018.

Unfortunately, Kady had to take some time out of the saddle for shoulder surgery in the fall of 2018. Because of the mare’s spicy personality, Kady opted to allow Charline some time out of the show ring while she recovered. It was during this time of reduced work that Charline’s Shivers began flaring up. Shivers, for those unaware of the condition, is a rare and progressive neuromuscular disorder that causes tremors and loss of mobility.

Although Charline was able to return to the show ring in 2019, it became clear to Kady that the mare wasn’t in her best form.”I just knew something wasn’t right,” she shared with JN. “She has always been such a good horse and so careful. She began having rails that she never would have had before, and she started to feel nervous while jumping.” Kady relied on the help of both Dr. Reed and Dr. Embly at Rood and Riddle, both of which confirmed that Charline’s Shivers had progressed to a stage where it wasn’t safe for her to compete anymore.

“This horse has done so much for me,” Kady said. “She gave me the best three years I have ever had.” Kady attributes Charline’s long-lasting career, despite her condition, to the hard work of her barn manager, Matt Wildung. “It takes the right person to look over her, and Matt always took the extra time she needed to be fit and happy.” And Charline will continue to receive that exemplary care for the remainder of her days as she retires on Kady’s farm in Kentucky. The Abrahamson’s aim to perform some embryo transfers on her in hopes of producing another horse as wonderful as Charline in the years to come.

Kady wanted to thank the team at Rood & Riddle for their hard work in diagnosing and keeping Charline comfortable, Sharn Wordley for giving her the chance to own such a spectacular horse, her previously mentioned barn manager, Matt Wildung, for his incredible attention to detail and her trainer, Scott Keach, for keeping Charline in a program that fit her needs.

In honor of Charline, Kady penned this beautiful tribute on her Facebook page:

Happy retirement, Charline and ALL HAIL THE QUEEN!