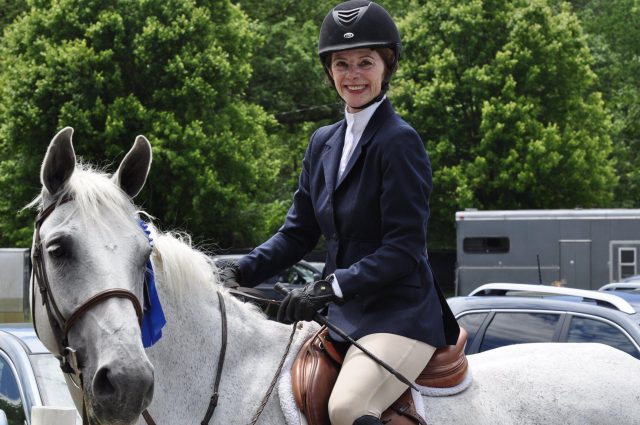 June 19, 2019DeAnn SloanReader Submission#findingtherighthorse, Riding as an AdultLeave a comment

Horse Nation reader Lettie Teague recounts the journey that brought her to Tenderly, the “just right” horse for her. 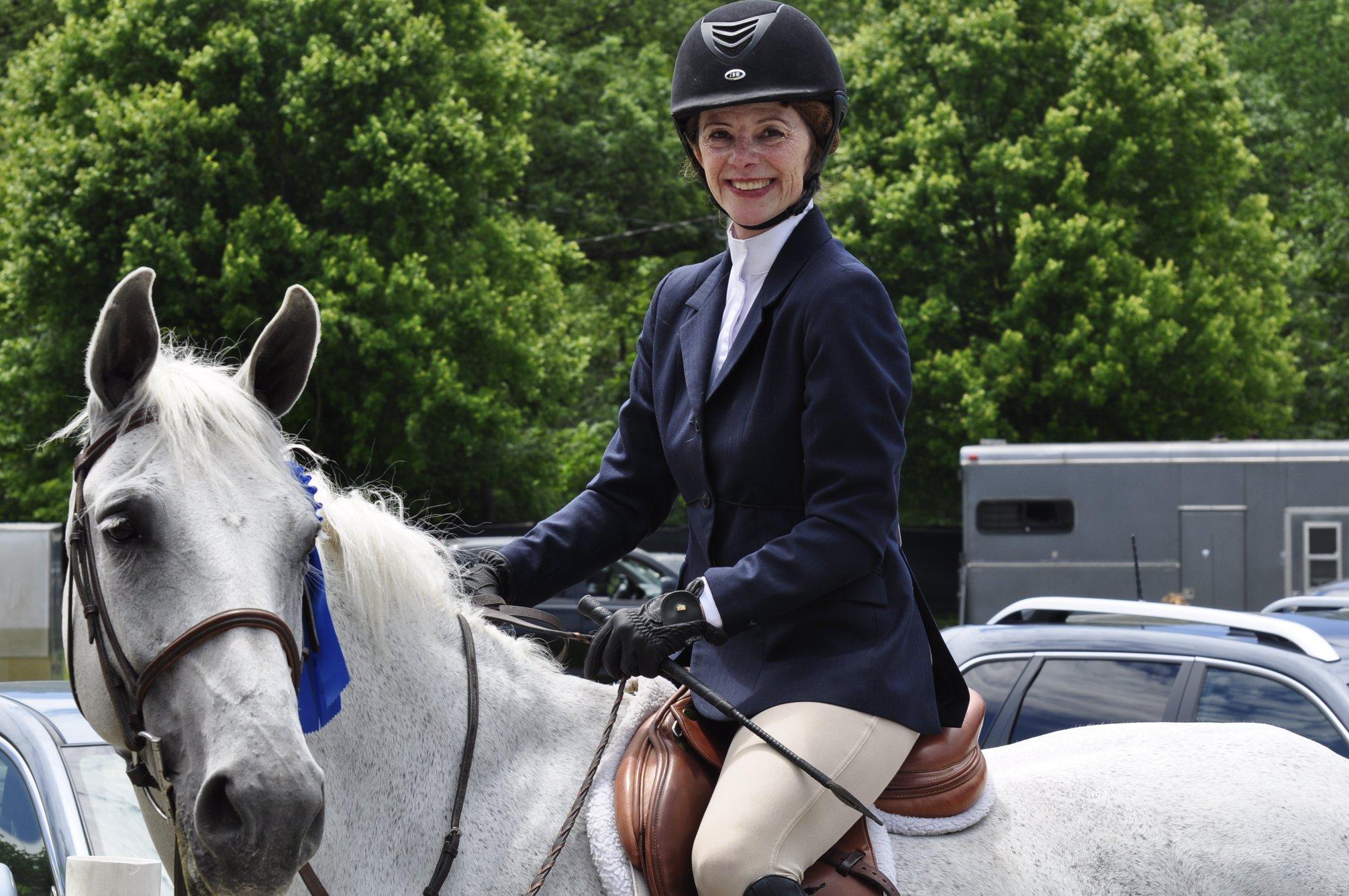 Like so many young girls, I dreamed of owning my own horse and by the time I was sixteen, I’d actually acquired three, thanks to the fact that we’d moved to a small farm in Indiana. All of the horses were cheap and largely untrained, including a pony that I bought for  $75, hoping I could use her to teach my sister to ride.  That didn’t happen since as everyone knows, ponies can be devilish and the pony, whom I named Trystana, was one of the worst.

The two horses included a four year old green broke Quarter Horse named Lady and an even younger half-Arabian, half-Appaloosa named Dawn. I thought I would train them to jump. I didn’t get the chance to do very much with any of them since a few years later my father lost his job and I was forced to give them all up.

After graduating from college, I moved to Manhattan and rarely rode horses, save for a few jaunts around Central Park. Fast-forward a few years, I got married and moved to the suburbs, and began taking lessons at local stables and leased the first of several unsuitable horses.  The last unsuitable horse had an unfortunate habit of bolting when the mood struck; I was more than happy to give him up.

I returned to taking lessons, this time on a stocky Haflinger named Pablo who helped me regain my courage after my time with the bolter. After a few restorative Pablo months, I decided I should have a Haflinger of my own. (Pablo wasn’t for sale; he was too valuable as a school horse.) Never mind I didn’t know much about Haflingers and had no idea if the breed was suitable to a middle-aged, somewhat nervous rider like me. I wanted a horse of my own – one that I would never have to give up.

I researched Haflingers; they sounded suitable (solid and quiet, if stubborn) and I even found a picture-perfect Haflinger farm in the rolling hills of Connecticut that was even more beautiful in real life than in its Facebook page photos.

There were 14 Haflingers and seven employees at the barn – a pampered two horse to one person ratio. The place was impeccable as were the horses, and I fell in love with the most beautiful and, of course, the most unsuitable horse of them all: a four-year-old Haflinger mare named Racine. She was as beautiful as she was stubborn and green (not to mention disdainful); Racine was especially disdainful of me. But I decided that Racine’s name – which means “root” in French – signaled our meeting was destiny since the root is everything in a vineyard and I write about wine for a living. 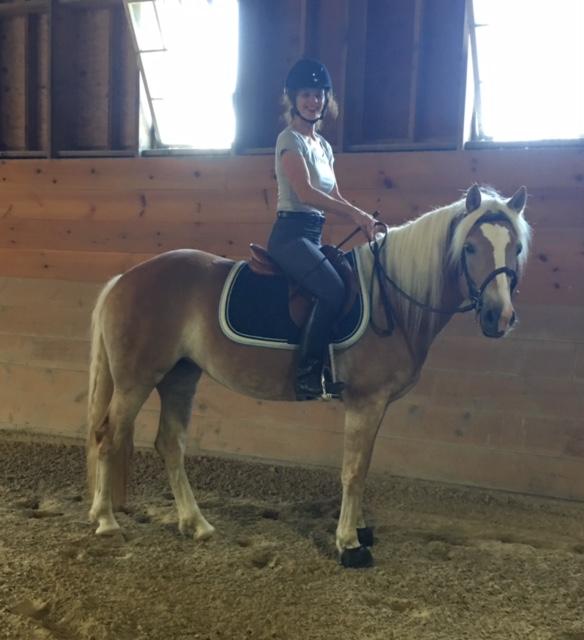 After a few months of four hundred mile drives, I decided I needed to move Racine closer to home if I wanted to ride her more often and develop a real bond. Perhaps she’d be less disdainful if she saw me more often. I toured about two dozen stables in New York and New Jersey (a story unto itself) to find the right place. After boarding at two unsuitable stables (a lovely facility with no interaction and a social, but unsafe one), I found the right one. Furlyn Farm & Stables in Greendell, New Jersey, seemed just about perfect – save for the fact it was a long drive from home.

The horses were well cared for, the barn was beautiful and the pastures were large; there were friendly people there, too. The head trainer, Ariel, was capable and smart, and the stable’s owner, Denise, was kind and she even had two corgis just like I do – which I figured meant that our meeting was destiny.

The first few months went so well that I even decided Racine and I should enter a show – the barn had a show team, after all. The week before the show, Racine and I were in the ring cantering… until we were not. I woke up with a face full of dirt and two EMTs standing over me, asking for my husband’s telephone number.

As Denise later explained, Racine had not only tripped and fallen, but also had fallen on me. I ended up with a concussion and a torn MCL, and I knew I was exceedingly lucky. It could have been so much worse. Or as all the (non horse people) said to me, “You could have ended up like Christopher Reeve.” I guess because the late actor’s experience is their only reference to a terrible equestrian accident.

Everyone urged me to give up Racine – she was too green and we weren’t a good match – but I resisted. Racine was my destiny and I’d promised never to give her up. Then I met a much younger woman named Mel who knew a great deal about Haflingers and even had a few of her own. When she and Racine met, they fell in love right away, and the horse that I was supposed to have forever turned out to be mine for a mere 15 months. Racine went back to Connecticut, this time, to Mel’s farm.

Six months after my accident, I returned to Furlyn. Ariel had an older gray warmblood mare named Tenderly whom she thought I should try riding , although I was very much afraid. Ariel reassured me. “Don’t worry, Tenderly will take care of you,” she said.

Tenderly has been taking care of riders all of her life – first, for her owner Danielle, for whom she was a top show hunter in her younger years, and more recently for two little girls who leased her until they needed horses that could jump higher and faster than Tenderly. At 19 years of age, Tenderly can’t jump very high or very fast anymore – which is fine with me. She can do 18 inch cross rails with ease, and that’s all I want. In fact, that’s what we did together in a horse show last month.

Although I was at least two decades older than anyone else in my classes and I hadn’t been in a horse show for nearly three decades, Tenderly and I ended up winning two fourth place ribbons on the flat and two third place ribbons for our little cross rail work. At our second horse show — just last week — we won first place over fences and Reserve Champion of our division. The (delightful) shock of that has yet to wear off. 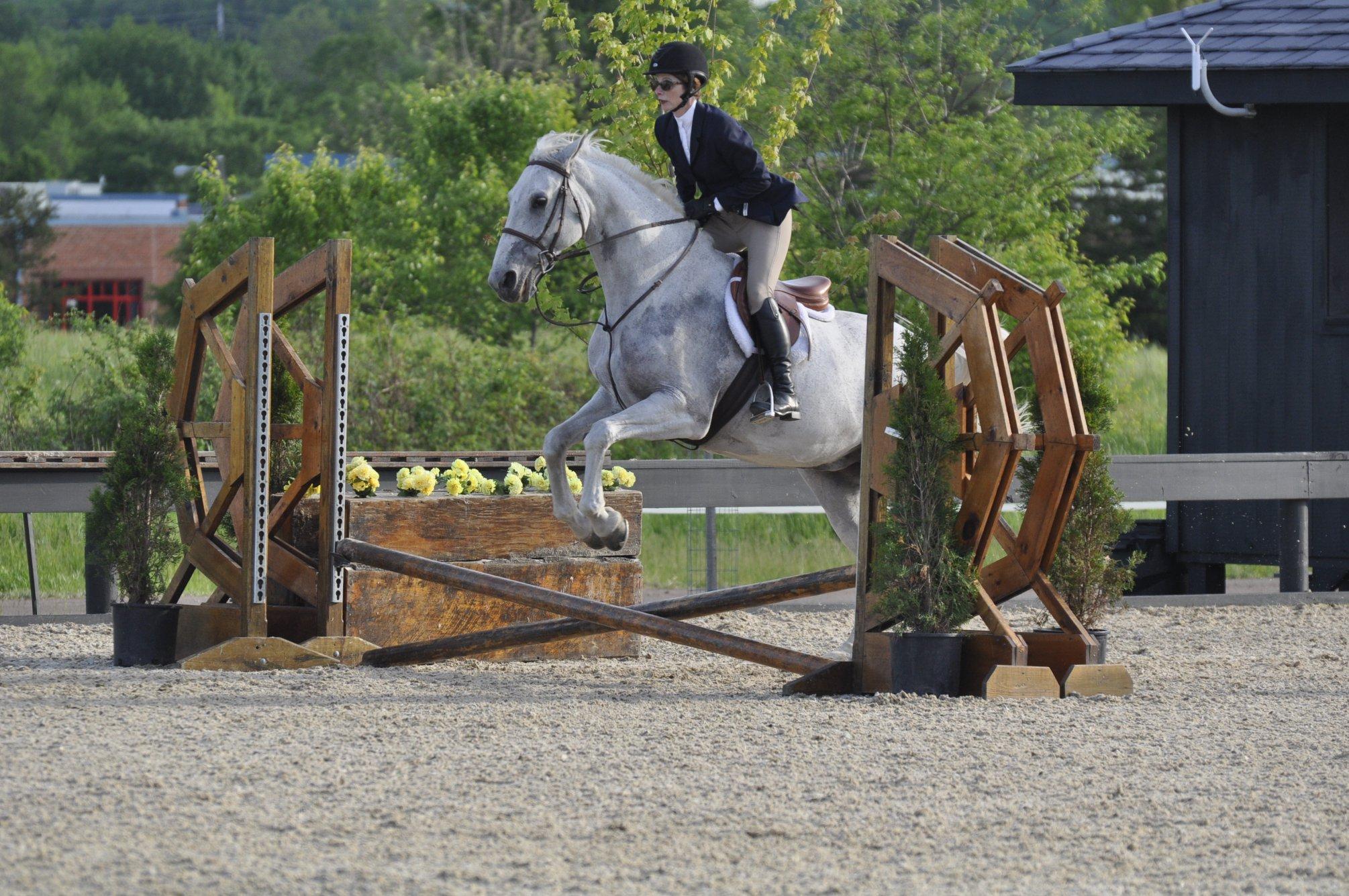 I don’t how long I can ride Tenderly (she has arthritis and other health issues) and she will never be mine (her owner Danielle will not give her up), but she took care of me when I needed her most and I will take care of her as long as I can. Tenderly restored my confidence and my joy in riding and I will always love her for that.

Lettie Teague is the wine columnist of The Wall Street Journal and the author of three books. She spends an inordinate amount of time on New Jersey highways driving to and from Furlyn Farm & Stable (and she wouldn’t have it any other way).