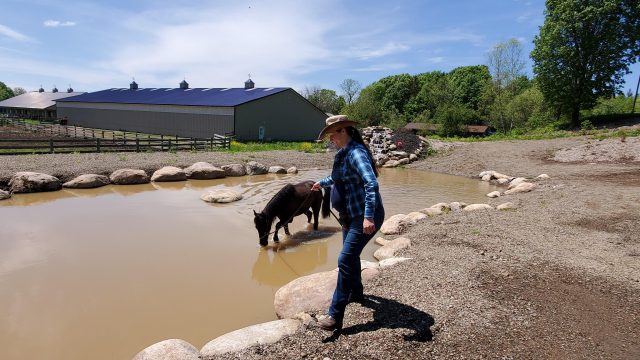 “If I ask a horse to do something and they don’t understand, it doesn’t mean I am going to give up. It just means I need to figure out how to help them understand.” 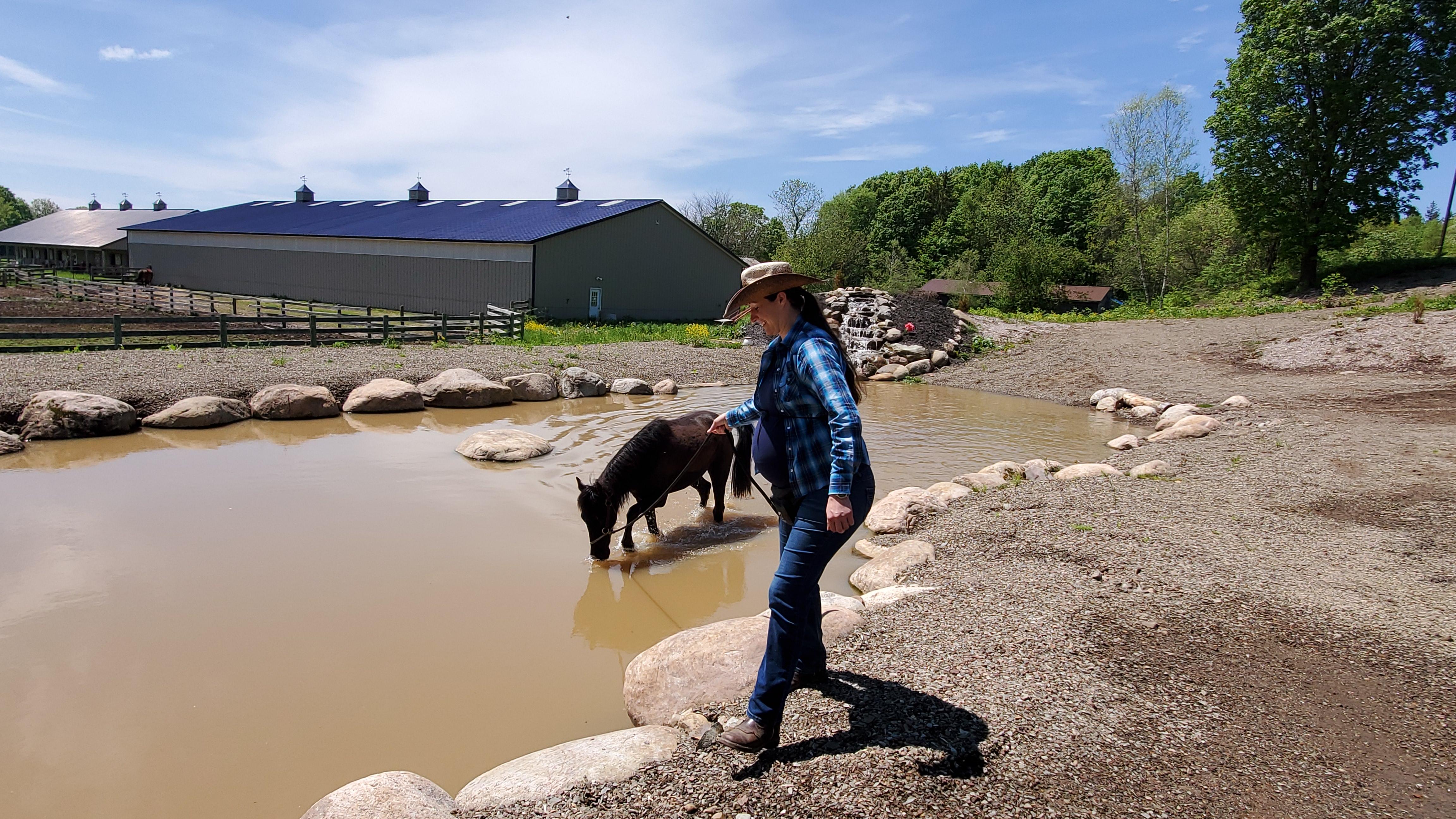 May was such an action packed month  – the Natural Horsemanship Tradeshow, teaching my last clinic in the States until my baby is born, competing in NY for Mountain Trail, teaching a liberty clinic using no tools (which is probably one of my favorite things to do), and filming another movie with one of our Corgis.

One thing in particular caught my attention – a debate on Facebook I got into about when a horse says no. A person posted that basically if a horse says no to a request then it’s the humans fault for asking the wrong question. I couldn’t help but disagree.

Often a horse’s intelligence is equated to that of a human toddler. Let’s think about a human toddler in kindergarten. The teacher asks “what color is this,” but the child doesn’t know. Does this mean the teacher was wrong to ask? I don’t think so. Instead I think it’s an opportunity for the teacher to teach what the colors are.

I find this true with horses, too. If I ask a horse to do something and they don’t understand, it doesn’t mean I am going to give up. It just means I need to figure out how to help them understand. In fact, what we know about confidence building and psychology is that if you live in a world where you are never challenged or never stressed, then you actually can become very insecure, very unconfident, and have poor resilience (the ability to bounce back from stress) and mental health.

Remember I am part horse trainer/clinician/competitor, but also part public health nurse with bachelor’s degree in health sciences – my area of research is mental health (and newly added I am working on concussions). I live for understanding psychology and more specifically about how we build our resilience.

If we are never challenged, we don’t learn to problem solve or develop a work ethic, and we are going to have poor resilience. In horse terms that means we need to challenge our horses. Note that doesn’t mean scare the death out of them or overwhelm them with something they can’t do. Being challenged with things you and your horse can overcome together means your horse can better cope with stress, learn, and realize they can trust you.

This past month I managed to catch on camera horses saying no for each of the 4 reasons a horse says no:

1. Scared. If a horse is scared they are usually very reactive with big movements. They might start sweating or poop because of the nerves, their head is usually up, eyes not blinking, and probably holding their breath or not breathing deeply. A great example of this was Farley – I’ve been helping Dressage Olympian Belinda Trussel with Farley who is a team hopeful. He is scared of lots of things, but in particular one day we asked him to walk over a pole. Luckily for you I filmed it. A horse that is scared just needs us to believe in them and be patient.

2. Doesn’t understand. If a horse doesn’t understand, they stay in a thinking frame of mind and are usually trying something, but not quite what you want. They aren’t showing any defiant behavior, they are able to breathe and blink normally. They just need you to be really clear about what you want. I captured on video at one of my clinics a horse that didn’t understand the idea of stepping up on a pedestal. It is really fascinating to watch the horse try different things and then figure it out.

3. Doesn’t want to. It will happen sometimes that your horse simply doesn’t want to do something. Maybe they are bored, they are lazy, or it’s just not something they enjoy. When a horse is being defiant but not scared they, usually have exit seeking behavior (trying to avoid what you want), but it is very calculated and thought out compared to the scared horse. Think about a horse that doesn’t want to get into a trailer, but isn’t scared. Sometimes they will carefully place their foot on yours to try and get you to move out of the way. Or a horse that doesn’t want to canter so they drift into the center of the arena to distract you. Arwin, from my first mustang challenge earlier this year, really doesn’t like getting his feet wet. At the Mountain Trail show we did a practice in the morning and he did all of the water obstacles successfully, but in the afternoon when it came time to show, he didn’t see the purpose of going through the water ditch. Horses that don’t want to need to be motivated. This is where making the “right thing comfortable and the wrong thing uncomfortable” works.

4. Can’t. This could be a horse that is sore, lame, hurting, or could be the horse can’t because the footing is unsafe. Sometimes the horse will tell us they simply can’t do it and then we need to adjust our expectations.

Check out this video I put together which shows you all of the examples I mention above:

There is a bigger message here, though. One that I strongly believe in. We’ve been living in a horse training era where sayings like “the reward is in the release,” “ask, tell, demand,” and “add more pressure until you get what you want” are common. This advice only works with one type of horse. It only works with the horse that is saying “I don’t want to.” This is a big problem. Think about it – if you are legitimately scared or confused, would someone yelling at you really help?

My favorite example is when someone doesn’t speak the same language as someone else goes to ask for help. Once they realize the person doesn’t speak their language, they try saying the same thing louder (and sometimes more slowly), but it doesn’t make a difference because the person doesn’t understand. Starting to scream the sentence at the person wouldn’t make a difference either; it might startle or scare the person into a reaction that might be what you want, but that isn’t really kind, nor is it going to create a bond of trust.

Instead, if someone doesn’t understand something, you have to think of a new way to say it or ask for it. In horse terms this could be checking your body is set up to cue in the clearest way possible, adding your voice to communicate energy, using touch or rhythm to help the horse understand, and/or being ready to reward the horse making the correct movement so they can understand what it is you want.

Likewise if the horse is scared, adding more pressure will probably just make them blow up worse and could lead to some really dangerous behavior as the horse tries to escape. 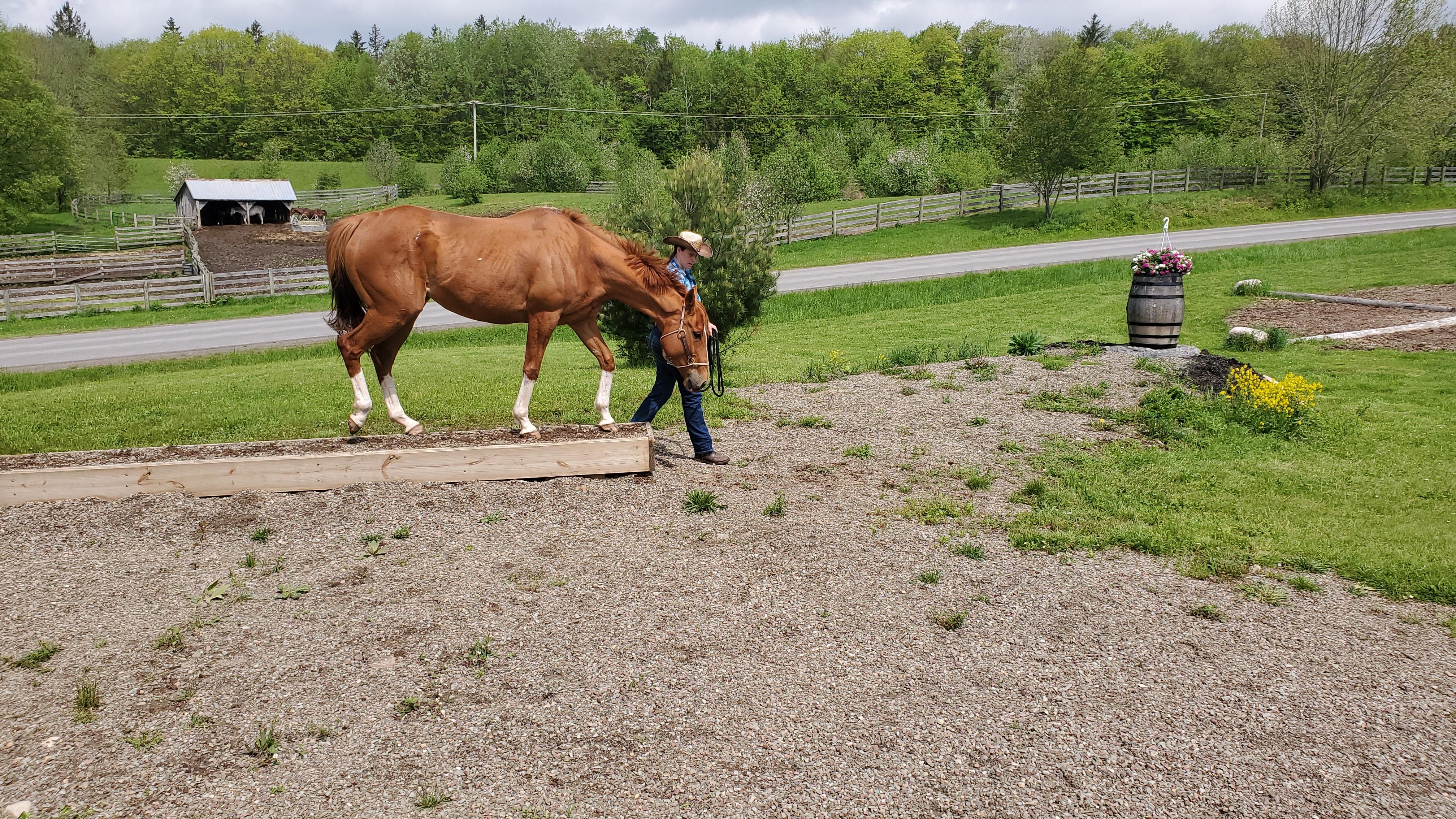 At the end of the day if your horse says “no,” it’s not the end of the world. It just means you have an opportunity to figure out why your horse is saying no and then respond with what your horse needs to help them say yes. After your horse does figure it out and say yes, your horse will have a lot more respect and trust for you provided you didn’t terrify them in the process.

It’s time we learn to better understand ourselves, our horses, and the language that connects us. “Ask, tell, demand,” is a saying that should stay stuck in the past, and “Ask, tell, and then wait, clarify, motivate, or adjust” is the way of the future for horse training.

Lindsey Partridge is the founder of Harmony Horsemanship and three-time discipline champion at the Retired Racehorse Project’s Thoroughbred Makeover. Follow her @LindseyPHH or visit www.LindseyPartridge.com.