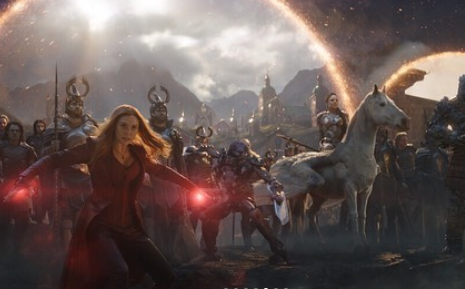 Amanda Uechi Ronan, HN’s corresponding queen of the equine silver screen, has a burning question about Avengers: Endgame — WHERE DID THAT PEGASUS COME FROM?

I’m back! Your favorite Queen of the Snark and Surveyor of All Strange Horse Entertainment is back for a limited engagement, like, literally, probably just this one article. Because Avengers: Endgame has come and gone and I only have one question…

WARNING: This article will contain spoilers. Albeit small and insignificant that they may be… they’re still spoilers. Don’t say I didn’t warn you. Scroll down at your own risk.

Like the rest of the world, I was waiting for Avengers: Endgame with bated breath. Infinity War was depressing to say the least, so we were all eager to see our plucky band of misfits overcome the Great Purple People Eater a.k.a. Thanos a.k.a. The Hot Brother from The Goonies.

I’m sure most of you have seen the movie by now, but here’s a quick recap.

A rat saved the universe and then was like, “Laterz.”

I mean, yeah, there was a lot of really great drama, character development, action sequences, and I cried because EMOTIONS, but, basically, a rat from San Francisco saved us, y’all.

But that’s not what we’re here to discuss on Horse Nation. At Horse Nation, we talk horses and there is one lingering equine related question that came out of Endgame.

WHERE WAS VALKYRIE KEEPING PEGASUS THAT WHOLE TIME?

What was your favorite moment from Marvel Studios’ #AvengersEndgame? See it again in theaters: [link in bio]

The last time we saw this power couple was in a flashback sequence of the amassed Valkyrie troops charging toward Thor’s evil older sister — that guy really doesn’t have great sibling relationships — in Thor: Ragnarok.

AND THEY ALL DIED.

Valkyrie recants this story deeply depressed having just stumbled dead drunk out of her ship — so basically every equestrian removed from their sanctum i.e. the barn — and Pegasus is nowhere to be found.

This was my quick recap to my husband — who watched the movie at the same time as me, but in a different state because #relationshipgoals:

The first time we see Valkyrie in the movie is at New Asgard, the quaint Norwegian village where Thor has somehow managed to morph into The Dude from The Big Lebowski. At that point, there’s no glorious flying horse to be found — just fishing nets and a whole lot of self pity.

After another time jump — two and a half hours real time, but one million years to my bladder — we finally see Valkyrie jumping into the climactic final battle ON A PEGASUS.

See, even Dave Skylark and Jack from Legend (circa 1985 … the one with the unicorn) don’t know what’s going on.

Where was Pegasus? Why did we not see the coolest creature in the universe until the last thirty seconds of the movie? Does Valkyrie keep him locked in the basement like Daenerys did her dragons in season four? Don’t get me started on that horrid Game of Thrones plot device… I mean, who locks up the thing that, literally, makes you special?

Free your dragons, D! That’s all I’m saying. But back to Pegasus…

Does Pegasus magically appear when he’s needed most? Do he and Valkyrie share some sort of cosmic link? Or was he in some seaweed-strewn paddock in New Asgard the whole time?

P.S. I was quickly corrected on Reddit that Pegasus are found only in Greek mythology, whereas Valkyrie rides a “winged stallion” originating in Norse mythology. But — because I’m stubborn — I’m going to call a spade a spade and just leave it at Pegasus.