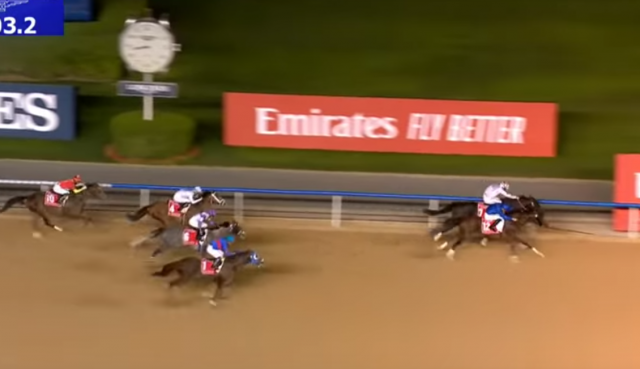 Thunder Snow made history in Saturday’s running of the Dubai World Cup, becoming the only horse in the race’s history to win it twice.

While American racing fans might still unfortunately remember Thunder Snow as “that guy” in the 2017 Kentucky Derby who took off bucking like a bronco at the start, our boy is making sure he goes down in history as a champion.

On Saturday, Thunder Snow became the first horse in history to win the Dubai World Cup twice — he ran away with the victory in 2018, but in 2019, he had to work hard for it. His thrilling stretch duel with Gronkowski is definitely one of the most exciting moments in racing in recent months: watch Thunder Snow win in a photo!

Godolphin’s Thunder Snow is by Helmet, trained by Saeed bin Suroor and ridden by Christophe Soumillon. His career earnings now total over $16 million.