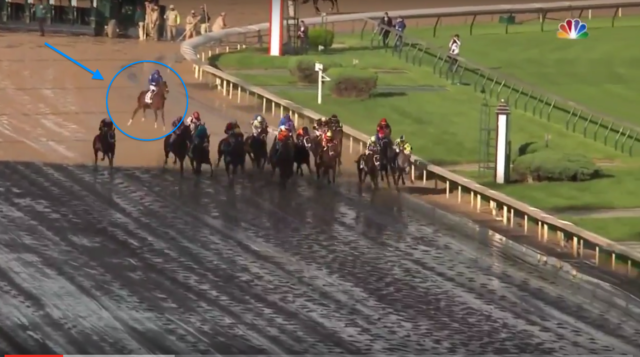 In case you’ve somehow missed the clips from Saturday’s Kentucky Derby that have been going viral all over the internet, we’ll cut right to the chase for you: a colt named Always Dreaming captured the win, and another colt named Thunder Snow captured our hearts… albeit in a slightly unusual way.

At the start of the race, watch the 2 horse — that’s the royally-bred colt Thunder Snow, racing under Godolphin’s colors:

Thunder Snow! What are you doing, buddy?

The good news is that Thunder Snow is just fine — jockey Christophe Soumillon did a hands-down impressive job defying gravity aboard the writhing, bucking colt and Thunder Snow was immediately scooped up by an outrider and taken back to the paddock for an immediate veterinary exam. The initial exam reported no sign of injury, and continued monitoring confirmed that Godolphin’s UAE Derby winner was physically A-OK.

Seriously though. Can we talk about how Soumillon is some sort of wizard?

Armchair critics, of course, have plenty of theories as to why Thunder Snow reacted the way he did, from seeing the sunlight glinting off the wet track to funny shadows to a different starting gate and bell (this was the colt’s first US start) to an intense dislike for the sloppy surface to ill-fitted tack to the evils of humankind.

Godolphin chief executive John Ferguson basically shrugged, stating that we might never know what set off Thunder Snow’s unusual performance. The horse had won on muddy tracks before and has raced all over Europe and in Dubai. Horses gonna horse sometimes, people. They just don’t always pick such a high-profile moment on national TV.

Tfw you put your money on #ThunderSnow pic.twitter.com/tsuHtT4cnx

Naturally, the internet went wild. From horse racing devotees to Derby-only viewers (many of whom seemed to naturally assume that Thunder Snow would promptly be taken out to the parking lot and shot for some reason) Thunder Snow became so briefly popular that he was actually trending on Twitter.

#ThunderSnow ahh the horse was just doing a Cantore during thunder snow.? pic.twitter.com/B0unnkCl7S

The next time I have a meltdown I’m going to refer to it as “having a Thunder Snow”.#kentuckyderby #thundersnow

There’s just something massively humorous of meteorologists picking #thundersnow and getting it way wrong.

But you know what, Thunder Snow? No matter what the disappointed bettors say about you as they pitch their Thunder Snow tickets in the garbage (unless you bet with SkyBet, in which case your Thunder Snow bets have been fully refunded) we here at Horse Nation salute your Kentucky Derby effort with all sincerity. So what if you were hailed as Godolphin’s best chance in recent history at winning the Derby, a race that has eluded the Sheikh for so many years? So what if you flew 7,000 miles from Dubai to much fanfare only to get pulled up in the first 50 yards?

We’re equestrians, buddy. We’ve all been there.

We’ve all gone off-course or off-pattern. Our horses have all thrown shoes the night before the big show. We’ve all come so unglued in the warm-up that we never even make it to the show ring. Our horses have thrown big bucks right in front of the judge. We’ve all trained for weeks and weeks for the biggest performance of our life only to make an error that brings the whole thing crashing down around us.

All we can do is laugh these moments off. And you, Thunder Snow, as you twisted and cavorted over the track at Churchill Downs, you big beautiful goofball, while you may now be the punchline to a thousand jokes, you’ll always have a special place in our hearts, because we are all Thunder Snow on the inside.

All is #Thundersnow.
I hope word gets to the owners, trainer and jockey how much Twitter adores their crazy, not-having-it horse.