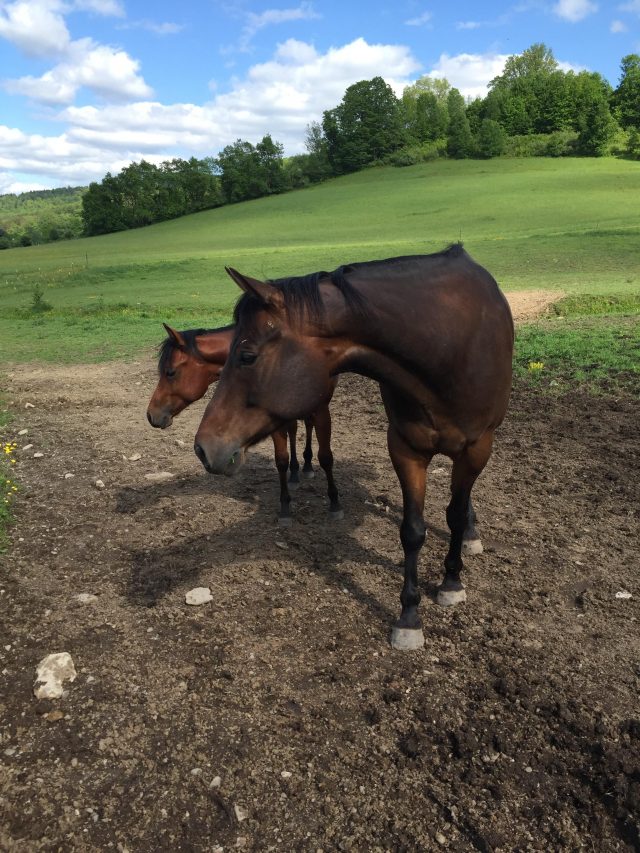 Which one is YOUR horse? 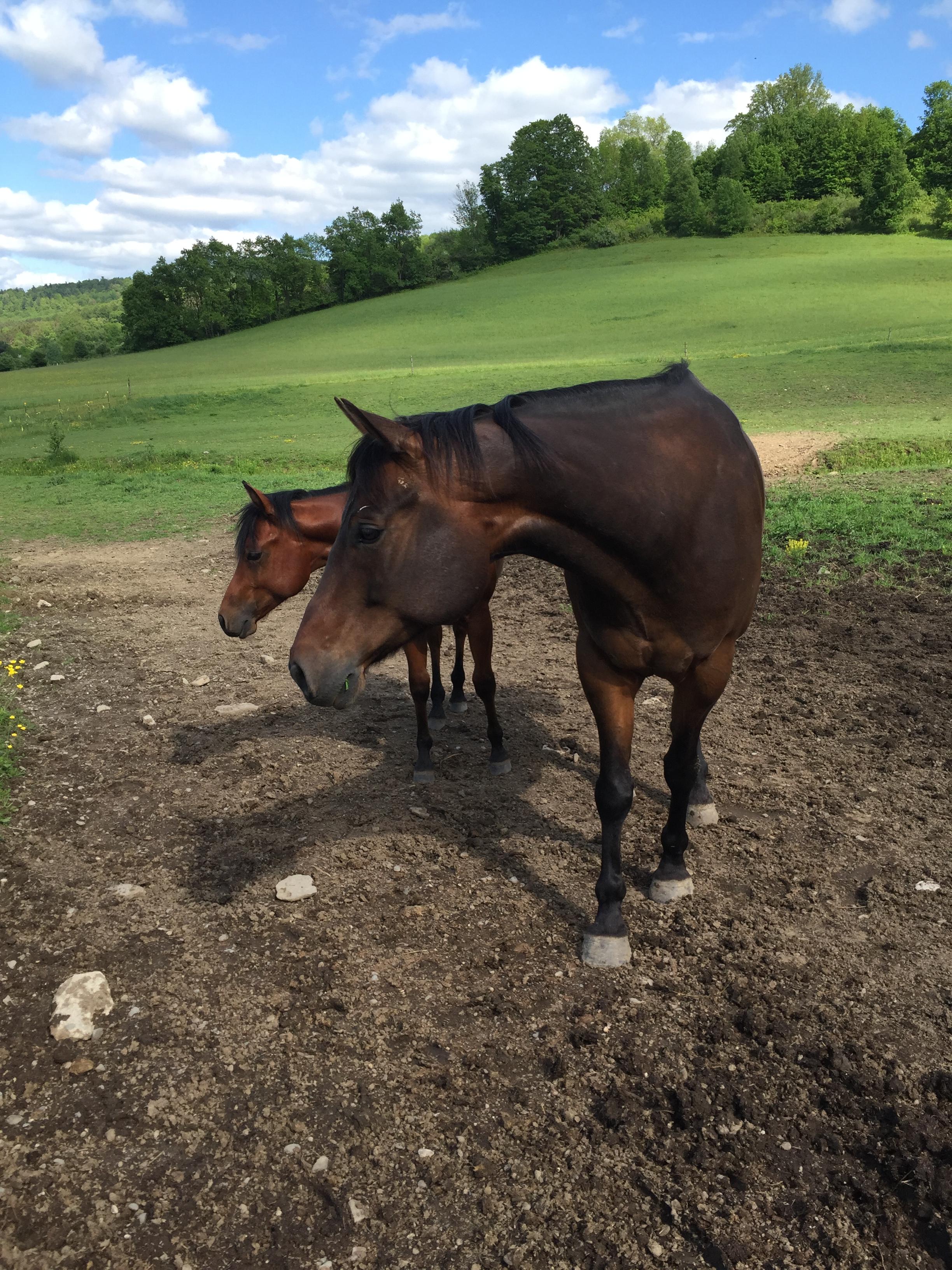 For people who haven’t spent much time around horses, it can come as a surprise that each one has their own personality and that horses can be just as expressive (if not more than) dogs or cats. As someone who spends most of my waking hours at a barn with over sixty horses, I encounter more equine idiosyncrasies than I can recount. In addition to school horses, both of my two horses have more personality than I do. Even though horses have somehow garnered a reputation as being proud and majestic, (which, sure, some of them think they are) their quirks come out the longer you spend with them. Here are different personality types you might find at any barn.

1. The Prankster. This is the horse you regularly see strolling around the property like he owns the place with a frazzled barn worker close behind. When you go out to his stall, he is likely to be on a self-guided taste-test of the hay bales you so carefully stacked the night before. By the glint in his eye when he knows he’s been caught, it’s obvious that he has no regrets and will absolutely let himself out again at the next opportunity.

2. The Hangry. This horse expects to be fed at the crack of dawn, sharp, and shows his intolerance for lateness by pawing, flinging buckets around his stall, and glaring at late feeders when they come into the barn. He is the first one done eating and will swear up and down that he hasn’t been fed yet. He will drag his riders across the arena to a single piece of hay on the ground and shamelessly chases his pasture-mates away from the best hay or grass.

3. The Princess. Approach her stall with a treat in hand or not at all. She is the most talented and prettiest horse in the barn and she knows it. She fully expects the royal treatment and will not tolerate anything less. She knows her worth, and uses it to get away with almost anything. The barn operates on her schedule. Wherever she goes, geldings follow her like lost puppies at a safe distance.

4. The Pot-Stirrer. Whenever there is drama, this horse gets himself into the thick of it. If he knows a horse is grumpy or doesn’t like to be crowded, he goes out of his way to antagonize. If one horse in the arena spooks, he does a full-blown reenactment just for effect even if he doesn’t know what the other horse spooked at in the first place. During shows or when his rider is trying to impress someone, he displays never-before-seen bad habits. When he thinks no one’s looking, he’ll breathe too close to the Princess and then blame it on another horse.

5. The Worrier. This horse has the most expressive eyes; you’ll swear he has more depth of emotion than any person you know, and he never stops thinking. If you leave him to get boots out of your car, he’ll work up some crocodile tears and look like an SPCA commercial until you return. He is the most empathetic creature in the barn, and can sense your feelings before you know them yourself. He knows what’s wrong in any situation before you do, and you’ll drive yourself crazy trying to figure out what he’s thinking.

6. The Accident-Prone. This horse is some distant relation to the Prankster, only his sense of humor came out a little warped. You live in constant fear of what you’ll find when you come to the barn, whether it be a twisted shoe, a shredded blanket, or a mysteriously lame horse. You’ll scour his stall and paddock to find what he could possibly have cut himself on and come up with nothing while he milks his injuries for as long as possible to avoid working. You strap boots and extra pads and bubble wrap onto him before every ride in hopes that you can make it through a month without accumulating more vet bills.

7. The Attitude. This horse will pretend to be your best friend, wait until your guard is down, bite you solidly on the arm, and then have the gall to act offended when you discipline him. This horse is usually one of the most athletic ones in the barn, but on any given day he puts about 50% of his athleticism towards being naughty. He has mastered the art of acting lazy on the lunge line and then blowing up as soon as he has a rider.  He can run circles with his rider’s foot in his mouth without skipping a beat, but on the rare occasion he decides to get through a day without any shenanigans, he’s unbeatable.

8. The Baby. Regardless of this horse’s age, he plays the baby card to get out of anything. Maybe he is really young, or maybe he never grew out of the cute baby face, but no matter what he does everyone brushes it off because he’s cute. He has youngest-child syndrome, and all the older horses roll their eyes watching him get away with things they were never allowed to do. They have long talks with him in the pasture about proper behavior, but he’ll never quite grow out of being the playful one of the herd.

9. The Old Reliable. This horse has been there, done that, and will stand next to you watching the rest of the herd interact. If he could talk, he’d have more wise things to say than any human mentor you’ve ever had. He’s beginner safe, but still has enough spunk in him to let riders know when their hand is too harsh or their spurs too abrupt. This horse is the grandfather of the barn, and all of the other horses have a mutual respect for him.

10. The Boss. This personality comes in many shapes and sizes, but is most often found in the form of stout ponies who rule their small riders with an iron hoof. He has no shame in showing everyone exactly what he thinks of every situation, and he has the audacity to demand treats after his worst behavior. He’s not above dragging small children back to the barn because he decided his trail ride was over before his rider did, but he usually keeps his children in one piece. Despite his stubbornness, he is protective of his riders, seems to always know what they need, and is happy to offer a mane to cry into when they’ve had a rough day (even if he caused it).

These are some of the equine personalities I’ve encountered during my years spent working with horses. Is your horse on this list, or have you created other titles for them?