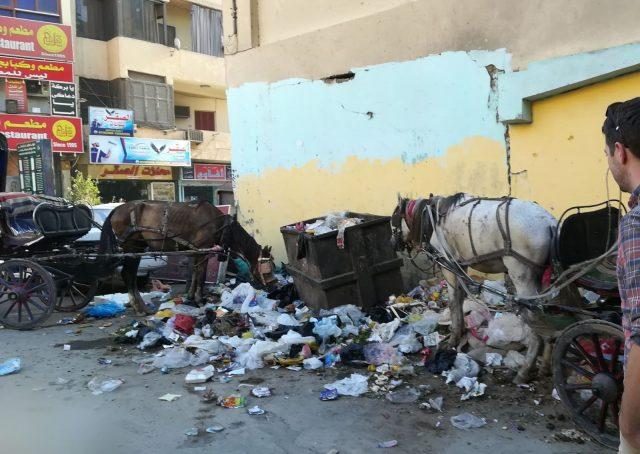 “I often have to remind myself that ACE’s role is to provide free veterinary care to the animals brought there — it’s not a sanctuary, and all the horses we help must go back to their owners, whether it’s the right thing for that animal or not.”

We’re so excited to have Jess on board the EN team, as she shares with us her experiences in Egypt and gives us a first-hand look at what Animal Care Egypt and Egypt Equine Aid are doing to help working horses, ponies and donkeys abroad. Fancy getting involved? Take a look at her JustGiving page, where she’s busy raising vital funds for both charities, and follow her on Instagram, too, for live updates from the field.

If you missed them, check out part one, part two, and part three of Jess’ blog.

I’ve been in Egypt for two weeks now, and honestly, I’m feeling a bit drained from all the amazing things and equally hideous things that each day brings. I hate to use such a cliche, but it’s the most extreme rollercoaster of emotions imaginable!

We’ve been venturing out into Luxor in the evenings, and what an amazing place it is. Hustling and bustling with busy locals, and steeped in history with the awe-inspiring Karnak and Luxor temples, the streets are ablaze with sights, sounds, and smells — there’s just so much to take in. The tourist scene has been very quiet in Luxor since the Zoll Revolution, and although it seems quite busy inside the tourist sites due to the busloads of tour groups coming in from nearby resort towns, generally, in town and in the restaurants, we’ve barely seen any westerners. The only thing I can say to anyone put off coming to Egypt because of its portrayal in the media as some sort of warzone is this: I’ve felt completely safe and in no way threatened whilst being here; I’ve eaten some of the most delicious food, seen some of the world’s most best archeological sites, and been able to get a small insight into a life and culture so different from my own, too. Working horses wait at bus and coach stops for customers. ACE sees many cases of carriage horses who’ve been hit by cars in the line of duty.

One thing that’s really surprised me about Luxor is that there are horses everywhere. Literally crammed into every nook and cranny of the city, amongst stray dogs, crazy traffic, and the swarming population, on every street corner, down every back alley, there are horses. These are mostly carriage horses offering tours of the city, though some offer ‘pony rides,’ in which non-horsey Egyptians are put on feisty, revved-up stallions and allowed to gallop around on a big swathe of concrete, amongst mopeds and quad-bikes, supervised by groups of what look like twelve-year-old boys. Some pull carts of produce between farm and market. If the number of horses was a shock to me, the thing I genuinely can’t get my head around is the lack of resources and regulations to protect them — in the whole of Luxor, with its equine population of roughly 900, there are two water troughs. That’s all. No washing facilities, no stables, no grazing areas.

The Brooke charity fundraised and built a roof above the carriage parking bays, where most carriage horses are tied up overnight — sometimes without the carriage and harness even being taken off — and during the day on the rare occasions they’re not being worked, but that unfortunately burnt down. The Luxor government wouldn’t grant the charity permission to rebuild, so there’s no longer any shade for the horses, either, in a city where temperatures can easily reach 50˚C/122˚F in summer. Left out all night with his carriage still attached and no water, this working horse spends the early hours of the morning foraging from scraps of rubbish for breakfast.

Not only are their living conditions appalling, but there aren’t any regulations for their working conditions, either — no weight limit, no limit to the hours they can work nor the distance they can travel, and there’s no authority to reprimand owners who mistreat their horses, or to say that a horse is too young, too skinny, or too lame to be working.

The result of this free-for-all is that the horses are really suffering. There are no incentives or rewards for the good owners, of which I’ve seen a few, and with business appearing slow the carriage drivers are getting desperate, staying out into the early hours hoping for work, which makes for a very long day for their horses. Even worse, they’ll often try to impress potential customers by galloping their horses up and down the road. Foals have to come to work, too. It’s not uncommon to see serious leg deformities — the result of having to work too hard, too young.

On the plus side, at least many owners are making use of the resources and care available at Animal Care Egypt, where I’ve been volunteering. It’s surprisingly well-equipped, without being extravagant, and ACE’s team of competent vets is always eager to think outside the box, meaning that any ailment or wound presents an opportunity for recovery. Having spent a lifetime with animals I’ve seen my fair share of injuries, but every day at ACE has brought something new, from the calf born without an anus, the horse with a wither sore exposing the spinal processes, and the donkey with an amputated tail — it’s been great to learn so much through working here.

Horses have hopped into the clinic on three legs, and I’ve thought, “there’s nothing we could do to help; the owner will have to go home without them,” only for them to walk out totally sound a few days later after some rest, a substantial bandage as needed to immobilise the limb, and some anti-inflammatories. Other times, though, horses have come in with seemingly mild symptoms, for example, a minor colic, and it’s escalated into something very serious and life-threatening. Every day brings a different challenge. Horses eating trash is an all-too-common sight in Luxor — it’s little surprise that ACE has to deal with so many colic cases.

Some of the owners we deal with are very polite and grateful, while others have been rude or even downright obnoxious — with the latter it can be difficult, as they need to be told (quite sternly!) that how they’re treating their animal is not acceptable, but we don’t want to put them off coming back and risk the horse not receiving the medical care it needs. I often have to remind myself that ACE’s role is to provide free veterinary care to the animals brought there — it’s not a sanctuary, and all the horses we help must go back to their owners, whether it’s the right thing for that animal or not. The horses don’t belong to ACE, and to buy or rescue every single animal with an unpleasant owner simply wouldn’t be maintainable and, moreover, with absolutely zero legislation or rules, there’s no way to report any of the abuse we witness. There’s simply nobody with the power to seize the horses or punish their owners. The victim of pure carelessness — this horse’s teenage owner was one of the trickier clients to deal with, but with careful treatment, he was soon on the mend.

The consolation is when they come to us, but I often find myself being kept awake at night, more so than by the busy roads, guard dogs, and calls to worship, by the thoughts of these poor horses once they’ve been discharged, forced to struggle on, day after day.

My time at ACE will soon be over — and what an experience it has been! There have been times when I’ve felt like I’ve been watching miracles happen, and times when I’ve felt like we’re trying to walk through a brick wall of ignorance and carelessness. But in success and failure I’ve seen nothing but professionalism and kindness from everyone at ACE, and I really hope their great work will continue. Please do consider making a small donation at the link below — your contribution can help this incredible team continue their important work for these marginalised animals. The ACE volunteer dream team — Sam, Di, Billy, and Jess check out the Valley of the Kings.

Next I’ll be heading to Egypt Equine Aid — stay tuned for my next dispatch!