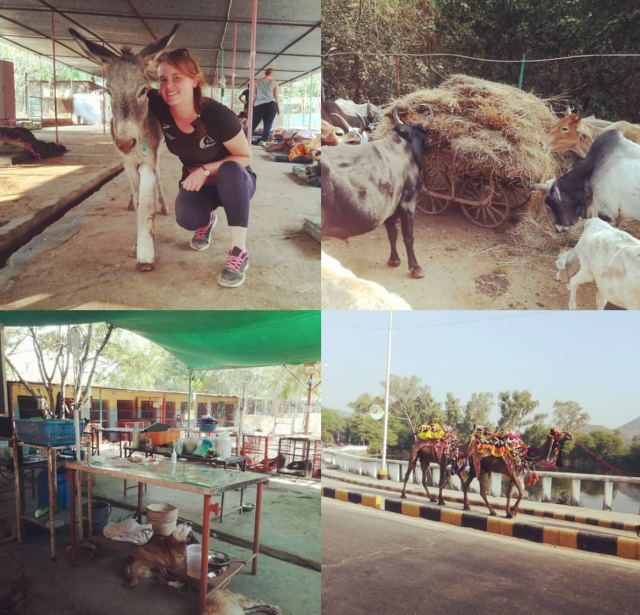 Jess Wilson, head girl and traveling groom for Sir Mark Todd, could have spent her winter relaxing. Instead, she headed to Egypt to work with two animal charities. Follow her journey here!

We’re so excited to welcome Jess on board the EN soapbox, where she’ll be sharing with us her experiences in Egypt and giving us a first-hand look at what Animal Care Egypt and Egypt Equine Aid are doing to help working horses, ponies and donkeys abroad. Fancy getting involved? Take a look at her JustGiving page, where she’s busy raising vital funds for both charities, and follow her on Instagram, too, for live updates from the field. Take it away, Jess!

As a young child I wanted to be a vet, and I used to cover all my toys in red nail varnish, stolen from my mum’s dresser, to mimic bleeding wounds. Then, I would bandage them up and take them to the makeshift hospital hidden under my bed. When I got older I naively gave up the academic route in pursuit of a career as a rider, but now have a very happy life doing neither — instead, I work as travelling head girl for Sir Mark Todd, looking after the nicest bunch of horses in the world (though I’m not in any way biased!) and travelling to the best and biggest eventing competitions. While it’s hard work, and not always as glamorous as our Instagram posts might lead you to believe, it’s an amazing life offering an unparalleled insight into elite sport, whilst allowing me to maintain that love of horses that I just can’t seem to grow out of! Jess and NZB Campino, known at home as Kinky, settle in to a sunny Burghley. Photo courtesy of Jess Wilson.

Travel is something that I’ve always been curious about, perhaps because, having always had horses at home to look after, I barely left my home county of Yorkshire until I was 16. In fact, my first time ever leaving the United Kingdom was when I went to Fontainebleau in France as a groom! But I’ve always had the idea that I might be able to use my passion for horses to do some good in the world. Now, a few years down the line and many countries later, it’s great to be in a position where I’m able to fulfil this long-held ambition of helping horses in need, combined with travelling to new places.

I’ve always liked the idea of doing charity work, but it wasn’t until a short holiday to Morocco last year, that I got my first taste — and smell! — of what life is actually like for the majority of people in the outside world that we’re so sheltered from. I found myself walking down sewage-filled streets in 45ºC heat, wrestling my way through the intimidating throng of beggars and traders forced, by their desperation, into aggressive attempts to get money. Seeing a sad picture in the media and having to physically peel crying, starving children off you as they cling onto your clothes, begging for food as you’re walking down the road, are two very different experiences, after all. And, of course, when people are stricken by poverty, their animals undoubtedly suffer, too. Jess and some of her charges at Animal Aid’s India outpost in 2017. Photos courtesy of Jess Wilson.

So last winter, with Mark’s horses on their holidays and spurred on by my time in Morocco, I put on my brave pants, had a #thisgirlcan moment and spent some time volunteering at Animal Aid, a charity hospital for street animals in India. I had an amazing time learning a lot about myself and life, but came home feeling utterly helpless — my efforts felt wholly insignificant. After travelling well over 1,000 miles on the road sightseeing, and for mile after mile seeing cows and donkeys knee-deep in rubbish rummaging for food, seeing child after child not in school but barefoot in threadbare clothes working in the fields, and passing horse after horse limping along, straining under heavy loads of timber, sand, and marble, I just couldn’t fathom how anyone would — or could — go about making things better on such a large scale for so many needy people and animals. I returned home riddled with guilt and questioning my own conscience that most days, walking to or from my tuk-tuk pick up point, I had been able to step over starving bodies in the street without stopping to help — admittedly partly from a safety point of view — yet was on my way to nurse hopeless cases of run-over stray dogs and cattle through their final hours. With three horses entered for Badminton in the spring, I was soon back into the whirlwind of the event season and, because it was a World Championship year, I was 100% focused on getting the horses prepared for their competitions. But still, the thought of the hundreds of impoverished animals and children struggling on, day after day, niggled away in the back of my mind.

I think the thing that stops a lot of people from trying to help is knowing where to start. There are so many issues facing the working equid population, and so many causes worthy of our time and money — from the brick kilns in Pakistan, the rubbish dumps in Mexican slums, live export through Europe, to the UK’s own abandoned horses crisis — that it’s tough to choose how to help. But things aren’t going to get better if we are overwhelmed into doing nothing. I truly believe, and have seen for myself, that the acts of one person can spiral into so much good, and I can’t justify treating ‘my own’ horses like the loving, intelligent, sentient friends that they are, yet turn a blind eye to the abuse and agony that their foreign counterparts are being subjected to. So I’ve decided to go back out into the big, wide, scary world, outside of my comfort zone, and will be spending my time volunteering at two charity equine hospitals in Egypt. Dorothy Brooke first brought the world’s attention to the plight of horses in this part of the world, and after reading The Lost Warhorses of Cairo at a young age, I’ve always wanted to try and improve things for the working horses there. With the population currently suffering greatly in an economic drought from lack of tourism — due, largely, to political unrest in the Arab world — many families are now living on the brink, and their reliance on working animals is huge. Unfortunately, that reliance is paired with a real lack of knowledge, resources, and, occasionally, compassion with regards to animal welfare in the country. Currently, there are no animal welfare laws, though I believe one is being drafted – but being without this necessary legislation causes unimaginable and unnecessary hardship to the horses there. A working donkey in Marrakech, where Jess was first inspired to take up charity work. “Whilst there’s no justification for neglect or cruelty, when you see their owners in rags with no shoes perhaps it’s easier to understand why their animals might not be shod or looked after to the standard we find acceptable,” she notes. Photo courtesy of Jess Wilson.

The first leg of my trip will be to Luxor, where I’ll be working with Animal Care Egypt, before heading to the outskirts of Cairo, the base of Egypt Equine Aid. There, they offer temporary relief and medical expertise for the poor horses, with all of the aid provided by the charity’s free equine hospitals. They also provide basic veterinary education and management advice for their owners. Egypt is a difficult climate for horses at the best of times, with heat, sand, and ticks to contend with. That, combined with limited access to veterinary professionals and, in the poorest areas, high rates of illiteracy and a reliance on tradition, means that these hospitals are stretched to their limits every day. They do everything they can for horses who are often walking the fine line between survival and death. 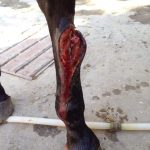 While these images are understandably upsetting to view, they’re a powerful reminder of how important sufficient veterinary knowledge and resources are. 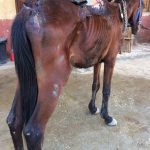 Underweight equids and horrific saddle sores can be commonly spotted, due to a lack of quality feed and forage, ill-fitting tack, and a dearth of management advice. 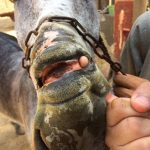 This wound was inflicted due to a tight chain noseband – such injuries are seldom due to cruelty, and charities such as Egypt Equine Aid work tirelessly to treat equids and educate their owners. 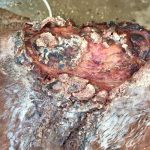 An open sore on a horse’s withers, caused by an ill-fitting harness and a heavy load, can quickly fester and cause incredible amounts of suffering. All photos courtesy of Egypt Equine Aid.

I’m excited to be able to share my experience with you, and I hope I can make some small positive impact on the lives of working horses in Egypt. For anyone in a position to donate, I’ve set up a crowdfunding page, the funds from which will be split between the two charities. In the meantime, I’m in the process of organising the hefty travel insurance I’ll need, a series of vaccinations, and, of course, finding suitable clothes to pack, but I know that the most important things to take with me are an open heart and an open mind!