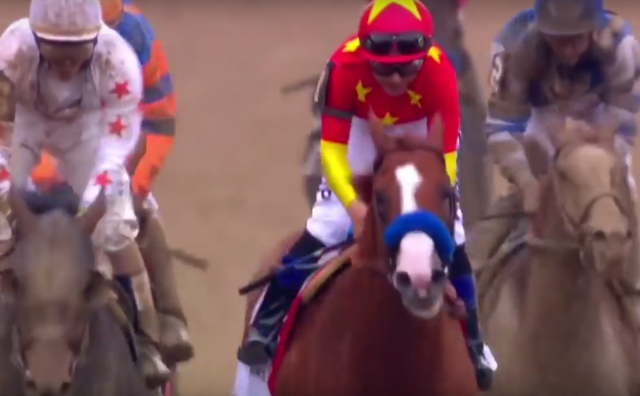 Today, we’re counting down the best performances of the year — highlighted for part of 2018 in our Wednesday column presented by EcoVet, we selected a great competitive performance each week and we’re looking at the best five now. Check them out and vote for your favorite! Winners will be announced on December 31.

Published June 10, 2018: “But Smith had yet to ask Justify for anything — the big chestnut strode on, Vino Rosso toiling in his wake, Hofburg beginning to move up the field and Gronkowski cruising up the rail. Into the stretch, Smith asked the question, and Justify answered, holding off Vino Rosso and the imperious Gronkowski, striding easily home a length and a half in front.”

Published July 25, 2018: “You know what’s more wild than arena eventing, show jumping or combined driving? PUTTING ALL THREE OF THEM TOGETHER. That’s what goes down annually at CHIO Aachen, famous for its world-class equestrian championships… and the infamous Jump & Drive.”

Published August 25, 2018: “Surprise: this is nine-year-old Senan Reape and 18-year-old pony Mickybo, a ten-year veteran of the Dublin Horse Show — and this is the jump-off round for the 128cm national championship. Finishing a full two and a half seconds ahead of the competition, it’s safe to say that Reape and Mickybo turned and burned. Listen to the roar of the crowd!”

The winning small pony jumper Mickybo! The kids have to be under 12 years of age to show the 12.2 ponies and they are amazing!! #12.2 #ridiculous #ponyjumpers

Published October 10, 2018: “A few special events highlight the Congress calendar — the freestyle reining is always a big hit in particular. Slightly lesser known but just as impressive, the bridleless cutting draws a big crowd as well: contestants must compete their horses without a bridle, demonstrating the cutting horse’s true instinct for reading and working cattle. Zoe Woodland of Orient, Ohio took things a step further this year: riding Abby Prachar’s Peptos Instant Style, Woodland rode not only without a bridle, but without a saddle too. Considering the kind of athletic movement one can expect from a good cutting horse, this is not a feat to be taken lightly!”

Published November 14, 2018: “A good crowd turned out to see the mare’s last performance, but they were treated to even more of a show than they were expecting when Ms Dreamy’s bridle fell apart heading into the first circle. From Huss’s reaction, you’d think he had planned it — he simply scooped up his reins, then reeled in the dangling headstall and bit into the second circle and kept on showing. For her part, Ms Dreamy lived up to her name — never once did the mare come out of the bridle that no longer existed or give any other indicator that this was anything other than routine. It’s a testament to her training that she was foot-perfect for the rest of the pattern.”

The #AQHAWorldShow is full of excitement and success, but this moment from the senior reining finals is sure to warm the hearts and spirits of horse-lovers everywhere. In the middle of Dan Huss’ run with Ms Dreamy, the bridle broke. Instead of stopping, Dan scooped up the hardware and kept on trucking – making this a once-in-a-lifetime moment on a once-in-a-lifetime horse. This is also Ms Dreamy’s final run before her retirement. What a way to go out – ears up and all.