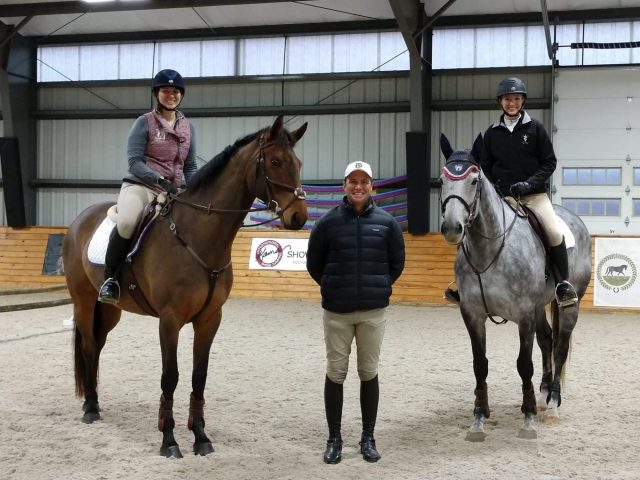 “I had been practicing a good amount of cavaletti and short turn work in our indoor at home… Spoiler alert: I was not so good at this.” Allison Howell’s Devin Ryan clinic report concludes with day two! 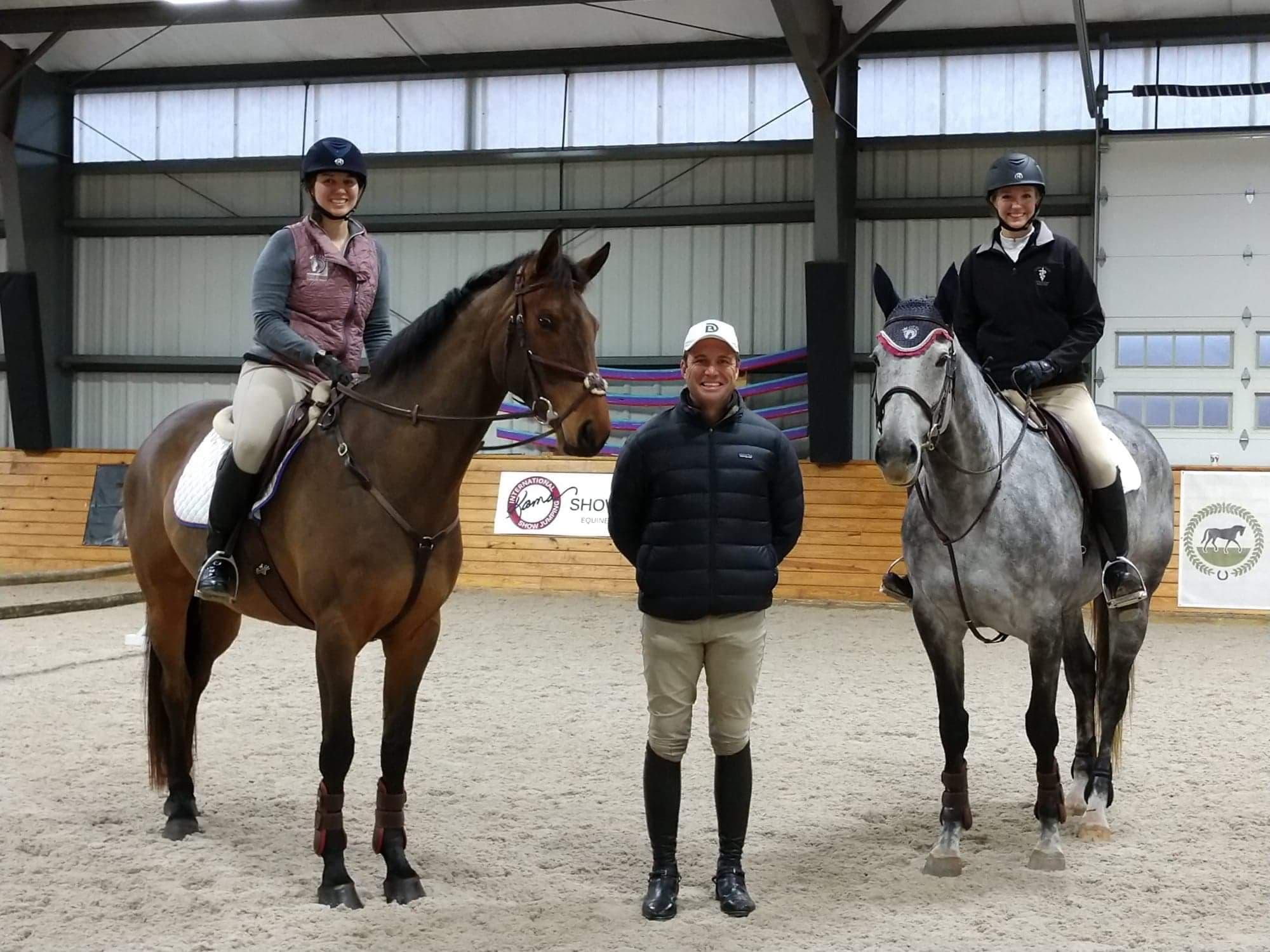 From L to R: New BFFs Allison Howell on Tipitina, Devin Ryan, and Dr. Malora Roberts on #tbmakeovergraduate Cassie – who can canter a vertical just fine. Photo by Brenda Howell

Miss out on Allison’s report on day one? Click here to catch up!

Why, why, why, WHY is cantering over the tiniest, most adorably swishy, inviting (did I mention TINY?) vertical at a canter the hardest exercise ever invented by mankind? Day two at the Devin Ryan clinic began much the same as day one: I met with my super-supportive mother and friend to watch the big jumper group before we rode later in the day.

Devin warmed the group up, had them lengthen and shorten within the gaits as he had on day one, had them drop their stirrups for a bit and then dug into them at the shoulder-in: “You must do this properly, it’s like going to the gym, it’s a strengthening movement; if you don’t do it properly, it doesn’t work.”

After that, he had them go through three trot cavaletti. Here Devin focused on contact again, imparting that “dropping them in front of a jump is abandoning our horses. Learn to have a light contact throughout the course… some horses need more of a release, some less, but keep a contact.” He then had the big jumpers canter for eight strides after the cavaletti, then transition back to trot, emphasizing “courses are all transitions!”

Then, as a warm-up, he introduced the vertical. Placed very unassumingly in the middle of the arena on the short approach, I watched the riders canter over it in circle, some taking off a little long or a little short initially. Once they were jumping from the appropriate distance, Devin had them place both reins in their outside hand and put their inside hand behind their back “to make your reins more united” and work on balance: “balance is never in your hands!”

And at that point I had the audacity to think “oh, I am going to be so good at this.” I had been practicing a good amount of cavaletti and short turn work in our indoor at home…

Spoiler alert: I was not so good at this.

Dear Kama: if there is a pile of little blue matchsticks in your arena where that friendly, blue, adorable, little swishy jump used to be – IT WAS ME. My mom, my wonderfully-supportive just-trying-to-help-me-get-better mother, videoed every attempt I made at that wretched vertical, to the point that when I was scrolling through the videos and thinking “dear God, woman, just give up already!”

I just could NOT seem to get the approach to this thing right. In spite of my efforts to

I pushed poor Tipsy for the long spot time and time again. Devin was level-headed throughout the whole clinic, but at this point I could hear the frustration begin to creep into his voice as he sagely repeated “when in doubt, wait it out.” The only slight consolation was that my partner in this exercise seemed to be having similar difficulties. Finally, FINALLY, I sat up and waited for that extra heartbeat and got in that extra stride to the jump. “You must trust her!” he commanded. “Easy for you to say, gold medalist,” I quipped back… in my head.

After that torture session was over, Devin had us start working on a course. This course started at the top with the vertical we had jumped the day before placed on the short side, serpentine around to the Vertical-That-Shall-Not-Be-Named, then around to the end of the ring and up over a teeny-tiny natural vertical, then halt after. (The halt at the end of the line seemed to help the one mare in our session that liked to get a little “wahoo!” to the jumps.)

For some reason, Tipsy decided to jump the little vertical like it was on fire. She has a tendency to jump things a little big every now and again, I’ve gotten in the habit of slipping my reins when she does this to try and avoid grabbing her in the mouth. I expected to get an earful from Devin for landing in a heap, but he was actually okay with the fact that I didn’t punish her for a big attempt.

After everyone performed the warm-up course satisfactorily, he had us incorporate the outside line backwards: we came in over the vertical, three strides to another vertical, one stride to an oxer, roll back to the vertical at the top of the ring, then around the whole ring to the other outside line – an oxer to a vertical in four strides. For this course, the focus was REALLY on maintaining the canter: there were nice long stretches up and down the arena where we had to focus on keeping the same canter rhythm, not fading in the corners and then accelerating in front of the jump. This was a good reminder for me to pay attention the whole time, as I tend to get a little casual if I’m not focused on a jump a few strides ahead.

Next: The Full Course – with liverpool! He asked who had jumped one before: Tipsy has done it with a pro, but we were dealing with some confidence issues this summer and I did not want to introduce an element that I wasn’t completely prepared to handle at the time. I had some trepidation but figured “eh, if I really mess this up, there’s a WEG gold medalist here who can fix her,” and off we went. The nice thing is he knocked it down to basically nothing the first time we did this course, and Tipsy sailed over it like a pro.

The full course was 13 jumps – 13! As someone who deals with wicked nerves while competing I was more than a little worried I would blank in the middle. Happily, I did not! I tend to get lackadaisical when riding courses and am frequently told to “look!” for where I am going next (so much so that I now hear the words “look” and “stay organized” in my coach’s Hungarian accent – thanks David!) so having the course in the indoor with so many elements was an excellent mental exercise, as well as physical practice. The added task of counting eight strides away, and then counting the strides down the lines, made it that much more cognitive, but also helped take the focus off my nerves once I got started.

I had a blast at this clinic. Other than the “counting eight strides away” exercise, there was nothing totally new or innovative that I hadn’t seen before, but the way Devin was able to establish big themes, and then pick on the details to make everything more cohesive was what left me most impressed.

Additionally, his ability to split his focus and attention between the six riders in my group was also impressive. We’ve all been to a clinic where one rider gets the majority of the attention and everyone is left feeling shorted. We had a really talented but spicy mare in our group who started the weekend thinking that the line of cavalettis was a timed event, and ended the weekend with some of the softest turns and most athletic efforts over the jumps, and he didn’t really spend any more time on her than he did the rest of us. If you have a chance to ride or audit with Devin Ryan, I highly recommend it!