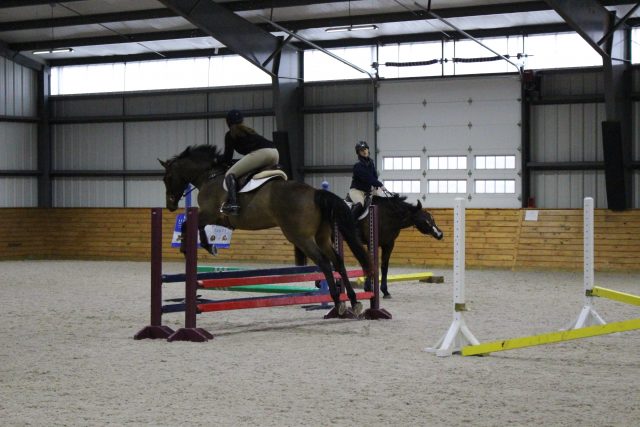 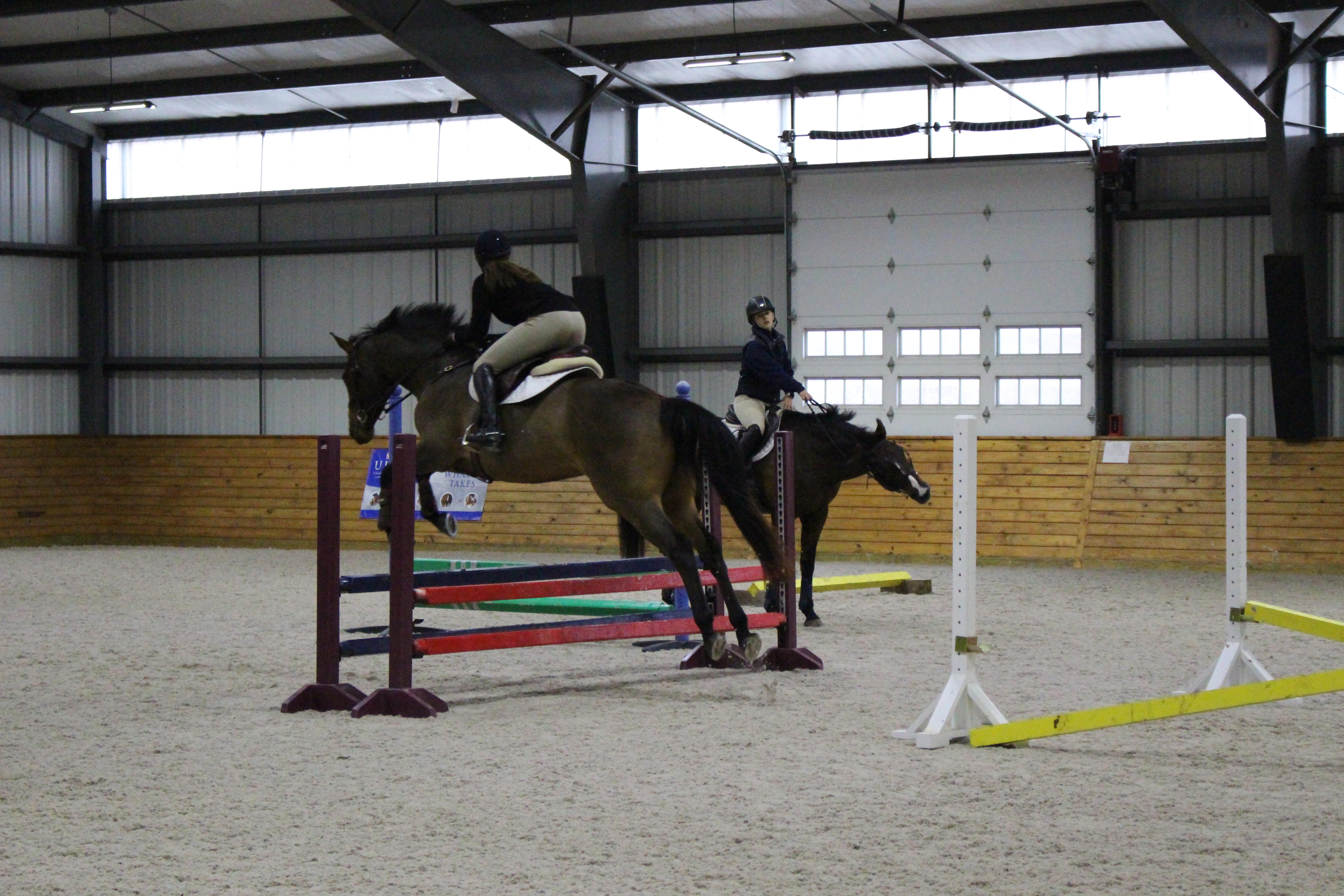 Allison and Tipsy. All photos by Dr. Jamie Shetzline

Before we get started with this whole thing, I should probably explain that I’m a pretty typical amateur: I work a full-time job, have a side hustle at a winery for show/lesson/vet bill money, and also work off some board one day a week at my barn.

I am also a bad amateur. I don’t really keep up with the rankings lists or where in the world the big jumpers are this week, so I had virtually no clue who Devin Ryan was before I saw the post for his clinic come across my Facebook feed. However, after reading his bio — he’s, you know, a WEG gold medalist for Team USA — and getting the okay from my coach (who has already fled south for the winter) I signed up for the clinic, and I am so glad that I did.

Devin (can I call you Devin? We’re friends now right?) is probably one of the top three clinicians I have ever had the pleasure to watch or ride with, and I was fortunate enough to see Karen Healey teach an EAP clinic one year. I would describe him as firm but not mean, demanding but not demeaning, excellent at conveying the concepts he was trying to get across, and he was certainly willing to acknowledge that each horse is an individual and his program might not work for every horse. He kept a near-constant commentary the entire two days, which was extremely beneficial to the auditors as well as the riders.

Side note: one of the amazing things about this clinic was the facility, Ohana Equestrian Preserve, located in Aldie, Virginia. This place is bonkers: heated viewing area, state-of-the-art sound system piped into both the viewing area AND the arena, and an indoor with footing so nice I briefly wondered if selling a kidney would be enough to finance an indoor of my own. 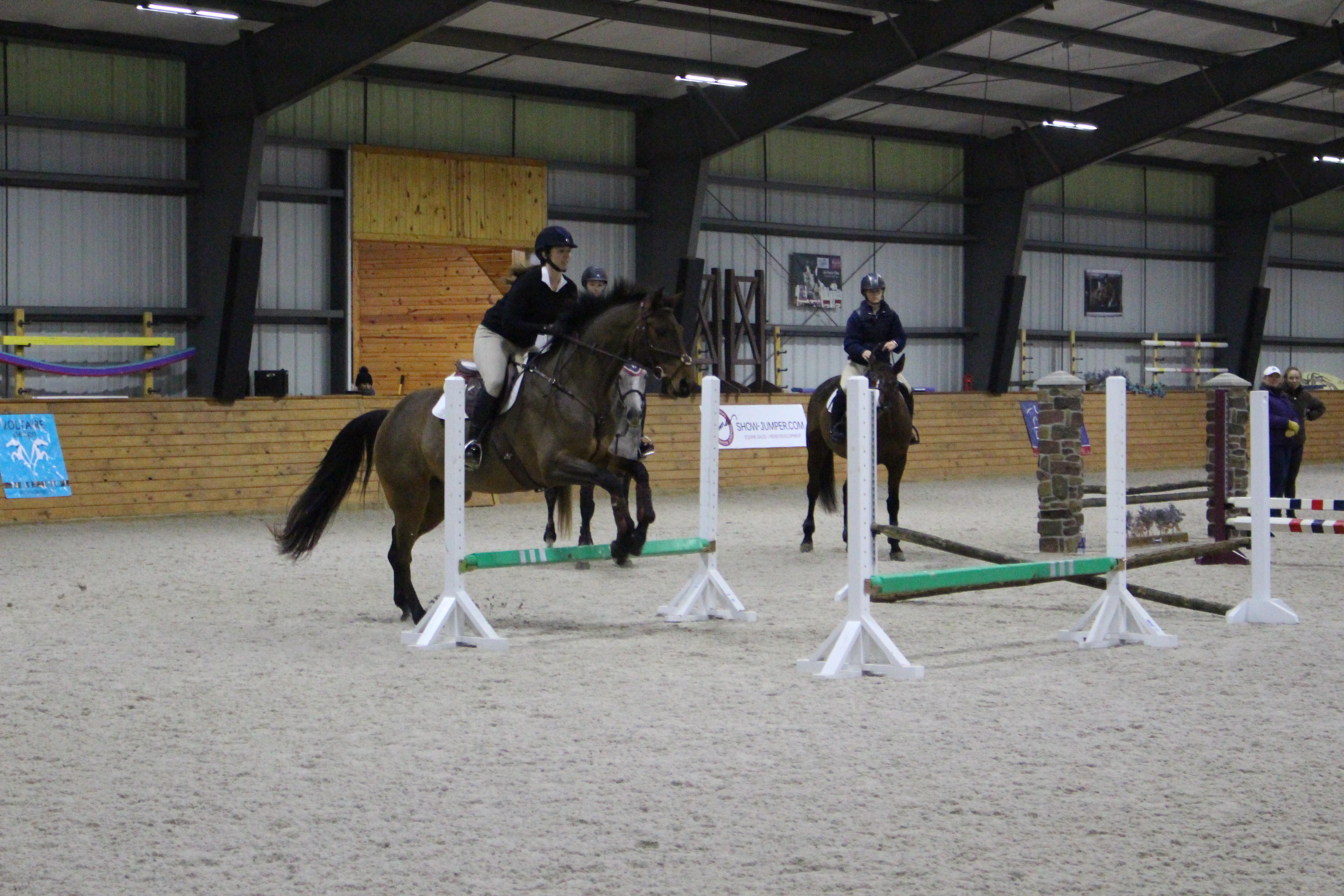 Back to the clinic: the schedule was formatted so the biggest height went first, and dropped with each following group, so we were able to watch the big jumpers go before we got ready. The schedule was pretty typical for a jumping clinic – flatwork and gymnastics the first day, then course work the second.

Devin watched us warm up at the walk, then called us over to chat leg position. Some memorable takeaways:

After that, he had the riders warmed up in earnest. Takeaways: 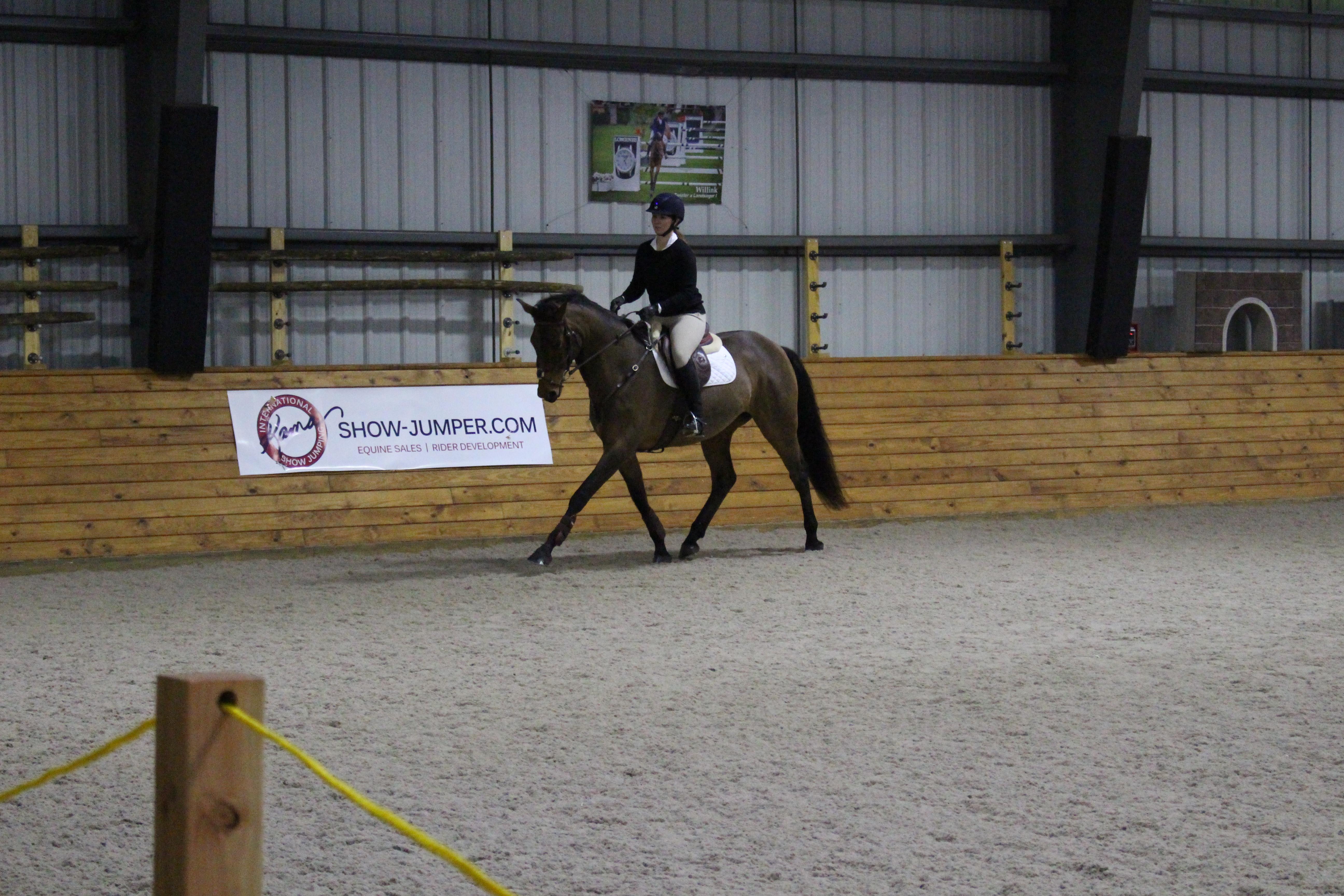 We moved on to some cavaletti. The first exercise was three very innocuous-looking cavaletti, set to three strides between. Devin offered that in an indoor, a horse will sometimes shorten its stride, so I believe he said they were set a little short. He said he liked this kind of work for a few reasons: 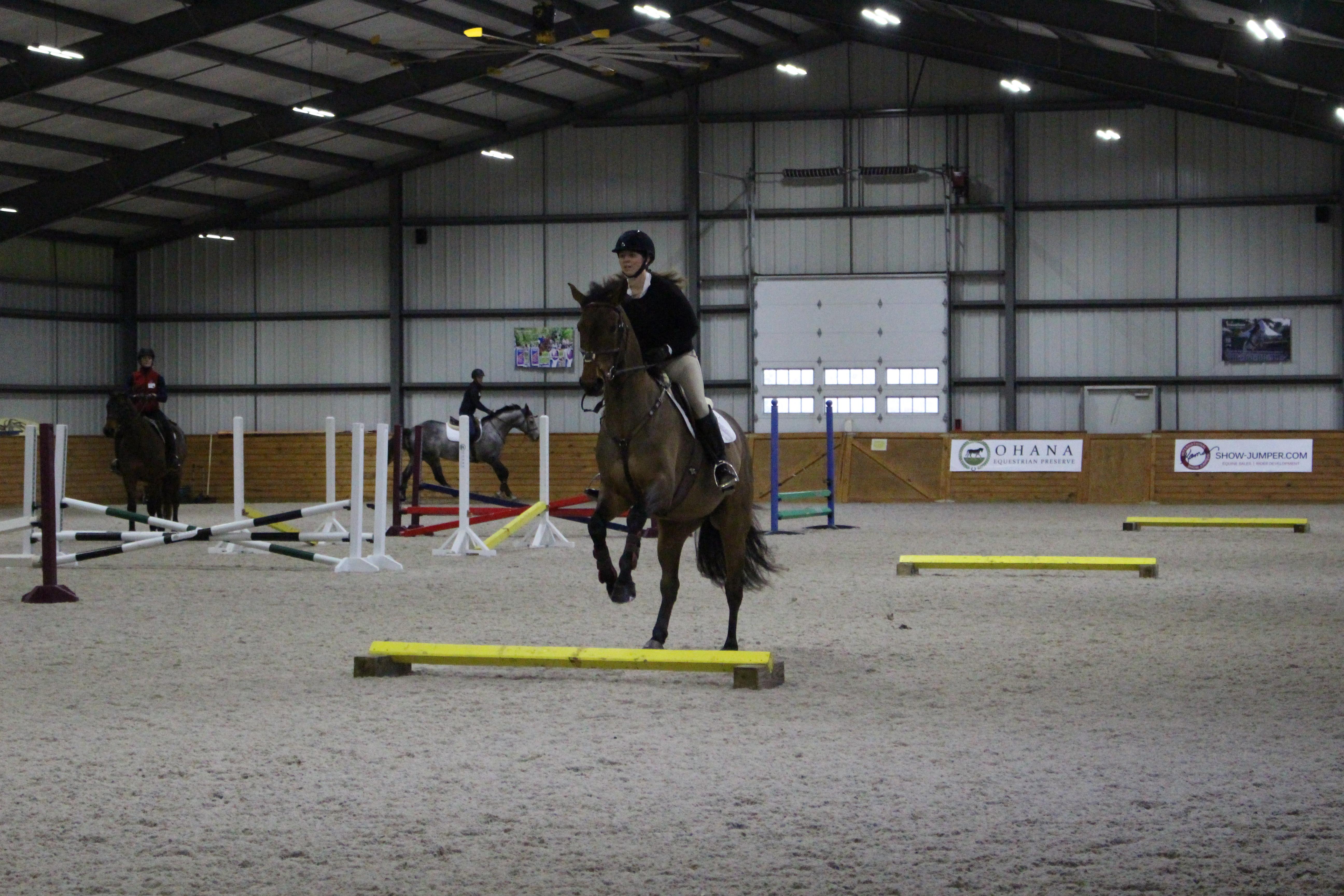 I will admit, it was nice to see that even riders who typically show over pee-your-pants-sized fences struggle with the “easy” stuff too. Some of the riders did not have enough canter coming into the exercise, and struggled to get the right number of strides; if they did have enough canter, it was not smooth. That was another of Devin’s big points: he wanted everything to be smooth and consistent. For the more advanced group he had them ask for three strides over the first and four strides to the second, working on rideability. For my group, he just had us work on getting absolutely smooth through the exercise.

And then here, my friends, is where he really made you think. We all, at some point in our jumping career, have probably been told to count the strides between fences. But have you ever, my dear little chickadees, been told to start counting when you’re eight strides out? And not backwards from eight — that’s cheating, because you try to make them fit, for which I was chastised not once but twice. I thought I had been doing this long enough and read enough articles and watched enough George Morris horsemanship clinics and had a million lessons to have seen most everything, but this one was new, and mindboggling.

I think we all basically just picked a distance we really, really, really, hoped was close, and then calibrated from there. He had us repeat this exercise to the fences in between the gymnastic (I’ll explain later) and then on Day Two in our courses. This exercise was extremely beneficial for me: it helps you keep your pace, works on your eye so that you can (eventually) reliably find the distances, and has the added benefit of forcing you not to hold your breath.

After everyone got their horses through the cavaletti well enough to satisfy Devin, it was time for the gymnastic. It started with trotting into a cross rail, one stride to a vertical, one stride to an oxer, and two strides to an oxer out. One point Devin made here that he stressed multiple times through the clinic was his dislike of round placement poles – he doesn’t mind square or raised poles, but had a horse step on a round pole which rolled, resulting in an injury.

The gymnastic was pretty typical, but he did have riders halt at the end of the ring for the first few trips. He explained that this was “so the horses know they can go to the end of the arena” and are not tempted to cut in on the turn. He also encouraged riders to maintain their balance in their two-point the whole way through.

Once all the riders were satisfactorily through the exercise, he had us serpentine over the verticals and bounces dispersed between the jumps in the gymnastic. Here again, he had us count when we felt that we were eight strides away, careful to maintain our pace and track so we would get a good distance. Another point he made here (and several times, sometimes in a slightly raised voice… at me…) was to NOT accelerate the last three strides towards a jump. This all came back to starting and maintaining the appropriate pace at the canter, and not throwing the horse off in the last seconds before a fence. The counting really turned into a source of amusement, as the disappointment in our voices was apparent when we got to the jump at “seven.”

I think everyone finished the day feeling like they had accomplished something, and ready to tackle courses on Day Two.