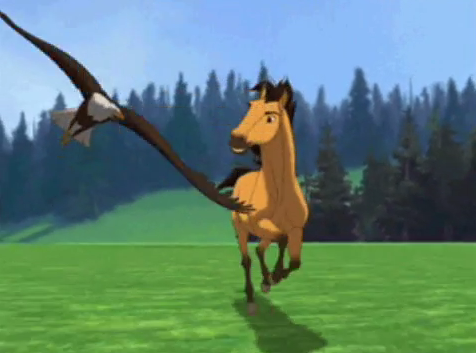 “I don’t know about you, but I grew up absolutely obsessed with the movie Spirit. Fast forward fifteen years and I am the proud owner of a BLM mustang of my very own!” Carson Nelson, HN Blogger Contest finalist, finds a few moments of film imitating real life.

I don’t know about you, but I grew up absolutely obsessed with the movie Spirit.

Fast forward fifteen years and I am the proud owner of a BLM mustang of my very own! Now, I did extensive research and grew up with a lot of horse background. But sometimes you just aren’t prepared for the moment when your mustang spooks and doesn’t stop spooking. In fact, sometimes he spooks so hard that you get dragged face down on some gravel until eventually the snap on the lead rope breaks and he is galloping full speed towards an open gate leading to a main road in your town…

That story ends with the miracle of me — very much a non-runner — somehow beating him to that gate and throwing gravel at him to get him to turn and at least run the other direction. This probably wasn’t my best moment as a wannabe mustang trainer but at least this story had a happy ending, right? Right.

Now that my mustang isn’t trying to pull a Spirit and escape back to freedom on a daily basis, things are pretty great! But I often wish that I could see the world through his eyes. I mean, why is he okay with me cinching him up and jumping around him like a fool but the spray bottle sound CERTAINLY means instant death? I don’t know. We’re working on it, okay? But I can’t help but make comparisons to my little mustang, Oliver, and some of my favorite scenes in the film:

Seriously. 45 minutes later, he’s still galloping around the round pen like his life depends on it. Work smarter, not harder. General Custer could take a pointer or two from Parelli, amirite?

2. He knows exactly what he is doing when he is misbehaving.

Thankfully Oliver has never llama-spit in my face, but you get the point.

3. Now that Oliver actually likes me, he is super into horse play with me – his delicate human.

Liberty play is one of Oliver’s favorite things. But sometimes he plays a little too hard – i.e. nipping, galloping at me playfully bucking, kicking, and rearing. Friendly, but a little dangerous. I’m working on teaching him horseplay vs. human-play boundaries.

Little Creek knew how to get a horse interested – pretend to ignore them. It works EVERY TIME with Oliver.

5. They captured the “heart of a mustang” just right.

Oliver and I won’t be jumping the Grand Canyon anytime soon (read: ever) but the moments when you win together sure feel this way.

On a more serious note, Oliver rocks my world every single day with his big personality and never ending try. I wish every mustang could live as blissfully happy as Spirit and his gang, but the truth is, our real world mustangs are caught in a huge political battle right now and they need real, loving homes. If you have ever considered adopting — even just a little — find a TIP trainer in your area and ask them all the questions in the world! Chances are, they are more than willing to help you find the perfect mustang.

Being an English rider in Utah is pretty weird. On top of that – I decided to adopt a BLM mustang after being inspired by one of my riding heroines, Elisa Wallace. One day I started dreaming about an eventing mustang and a few months later – I’ve got a cute little mustang yearling in a stall at the barn! Thank goodness for a willing husband. I have had some terrifying moments with my young mustang… for example, him breaking his halter after only two weeks of having him and watching him gallop straight for the open gate to a main highway in the middle of town. Somehow, by some higher power, I managed to outrun him and close the gate. I probably shaved a few years off of my life that day. Also, I’m pretty sure half of the people at my barn think I’m a whack job for taking on a mustang. But 98% of the time he is smart, amazing, and rewarding and I think he will be a great ambassador for the breed. I’m excited to saddle break him next year.

I’m also leasing a cute half draft right now and she is a western girl. So I’m trying my hand at riding in a western saddle while still wearing my breeches and half chaps – I can’t help it. I did buy some western boots recently though… you know, to fit in. So we’ll see how all of that goes.

Anyway, I have always enjoyed writing and all I ever talk about is horses so this seemed like a great opportunity to put myself out there and try something new! My other less prominent hobbies and skills include: spending too much time finding the perfect gif, taking lots of pictures of my cats, amateur gardening, baking, giving away baked goods to make people happy, working my job at an HR software company, and talking in mostly obscure movie and TV show quotes.