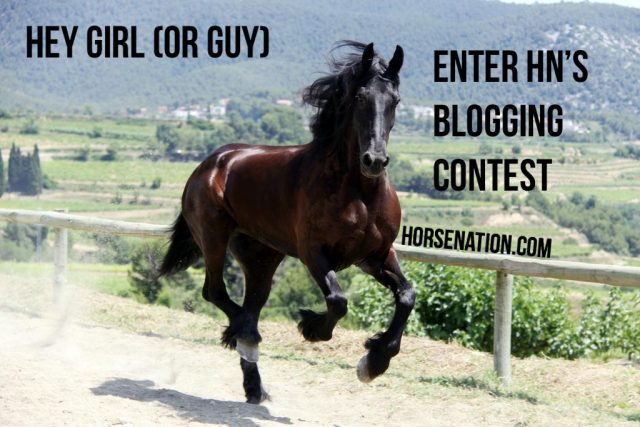 Five finalists have made it through to Round Two in our 2018 Horse Nation Blogger Contest! Get to know them here and be on the lookout for their Round One submissions throughout the week.

Our 2018 Horse Nation blogger contest saw a staggering number of entries in the double-digits, which made the winnowing-down process for selecting finalists quite the task indeed for our editorial team. Five bloggers have made it through to Round Two. Our heartiest congratulations to our talented five writers, presented here in alphabetical order:

Jessica Crandon (27, Berkshire, UK): “Aspiring eventer, but yet to successfully piece all three stages together. Used to dabble in dressage before buying a horse that doesn’t try to kill you over fences. Usually forgets that riding is meant to be fun. Character-defining qualities include the ability to stick out the most horrendous rides by chanting ‘it’ll make a good story’ until feet are back on solid ground. Also have much less faith in myself than talent and determination, so often end up pleasantly surprised.”

Sophia McKee (35): “While I’ve covered a number of my prior adventures, my current blog is following the development of a 3 yo unbroke Arab I bought sight unseen out of an auction for $300 in a moment of emotional instability. As well as my other adventures around the globe. I learned to ride by what my horses taught me. I wasn’t much for formal lessons simply because I couldn’t afford them. I ran away from home when I was a teenager – on horseback, for all of three hours (I got hungry, so I came home).”

Carson Nelson (25, Utah): “Being an English rider in Utah is pretty weird. On top of that, I decided to adopt a BLM mustang after being inspired by one of my riding heroines, Elisa Wallace. One day I started dreaming about an eventing mustang and a few months later, I’ve got a cute little mustang yearling in a stall at the barn! Thank goodness for a willing husband. I have had some terrifying moments with my young mustang… for example, him breaking his halter after only two weeks of having him and watching him gallop straight for the open gate to a main highway in the middle of town. Somehow, by some higher power, I managed to outrun him and close the gate. I probably shaved a few years off of my life that day.”

Sara Shelley (“not quite” 40): “Mom of three, recovering perfectionist, (the struggle is real) freelance writer, random-fact hoarder, and of course, horse-mad woman. I’m not a horse-show gal at this point in my life. And though I got my first horse at fourteen years of age, I was thirty-five when I competed for the first time. Took home the blue, (does it matter there were only three entries?) and crossed that dream off the bucket list. At least for now.”

Victoria Shields (27, Columbus, Ohio): “All-around rider. Owns a nine-year-old Quarter Horse gelding, Houdini, who has been nicknamed ‘Glass Pony’ for his knack for hurting himself in the pasture, and a Haflinger gelding, Nemo, who is five years old and just starting to figure out this ‘riding’ thing. Enjoys trail riding on horses that would rather be sleeping, pleasure riding, and low-level eventing. (But REALLY low-level, as in grasshoppers, not beginner novice. Those beginner novice fences are terrifying.)”

We’ll be hearing more from these five authors this week as we will be running their Round One submissions. We’re looking for reader feedback on these entries, so don’t be shy — let us know which of their articles made you laugh, touched your soul or inspired you as you read them this week!

For Round Two, our aspiring bloggers will be tackling the following prompt: “To ensure the future of equestrian activities, it’s crucial to attract new fans, enthusiasts and riders to the sport. How do you think horseback riding and equestrian activities can best appeal to the mainstream population?”