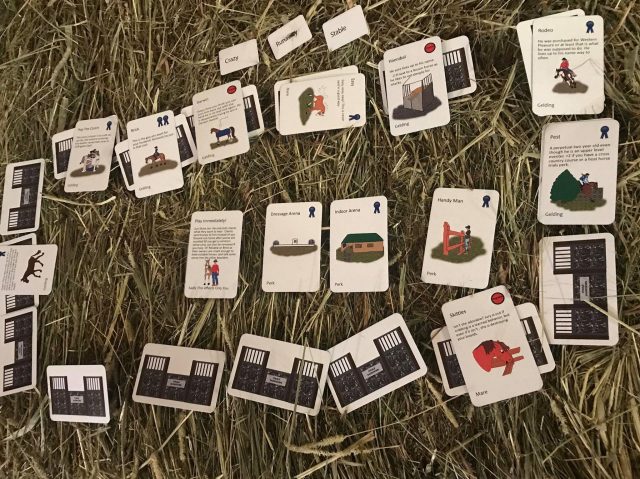 The internet went head over heels for Equestrians Against Normalcy, a horsey twist on Cards Against Humanity. We caught up with creator Victoria Morrow to learn more about her latest creation — Stable Showdown! 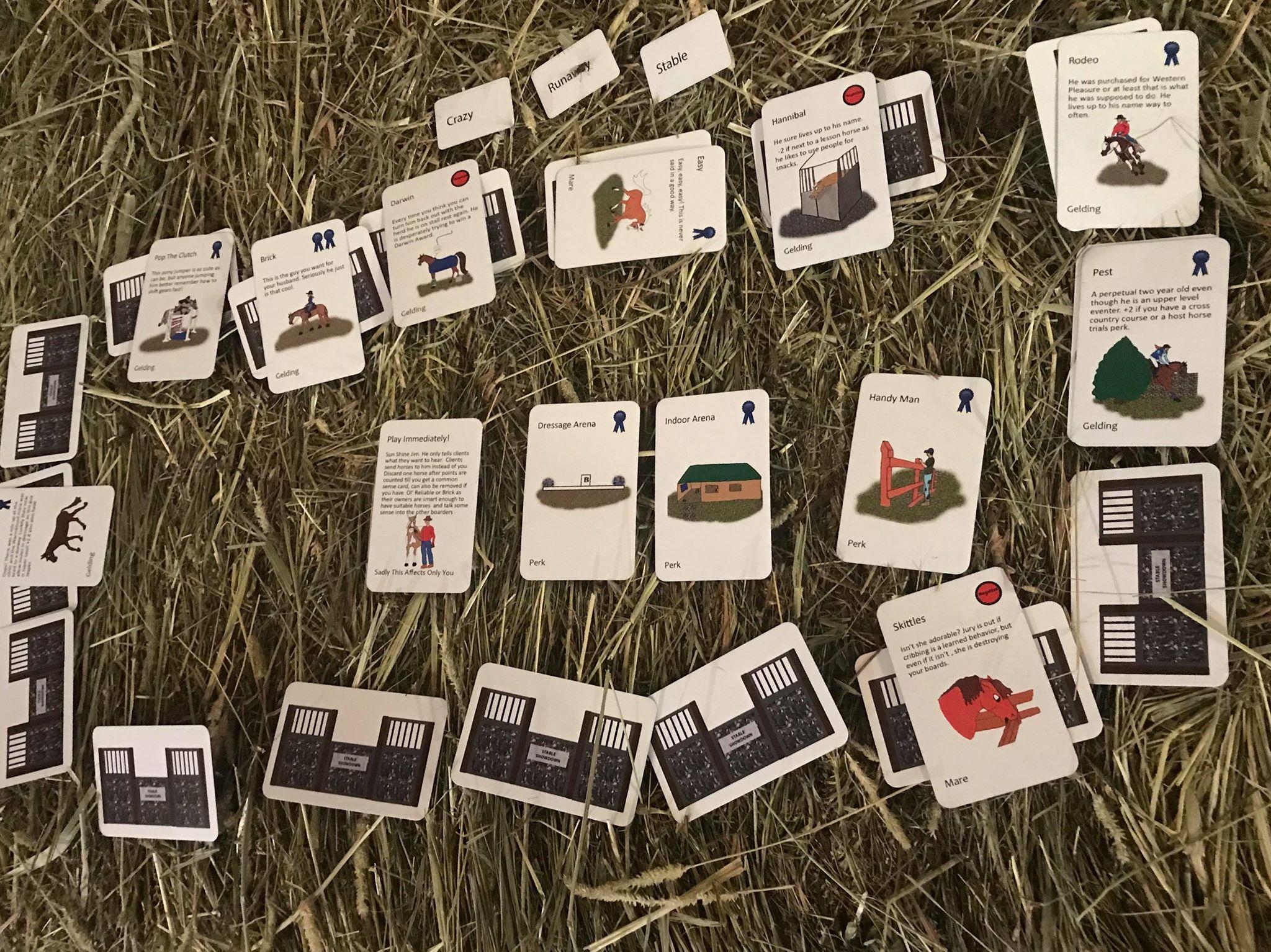 Less than a year ago, the introduction of a new card game just for weirdos like us —  that is, horse people — basically broke the internet: Equestrians Against Normalcy was released just in time for the holiday season and our Q & A with game creator and fellow equestrian Victoria Morrow gave readers a glimpse into the world of game design (while also juggling things like running a boarding and training stable). HN’s own Morgane Schmidt Gabriel rounded up some barn friends and adult beverages and confirmed that EAN was just as much fun as anticipated, if not moreso.

That’s why we were so excited to see that there’s another game in the works from Morrow, and promptly tracked her down somewhere between the arena and her home office to learn all about Stable Showdown, her latest creation. 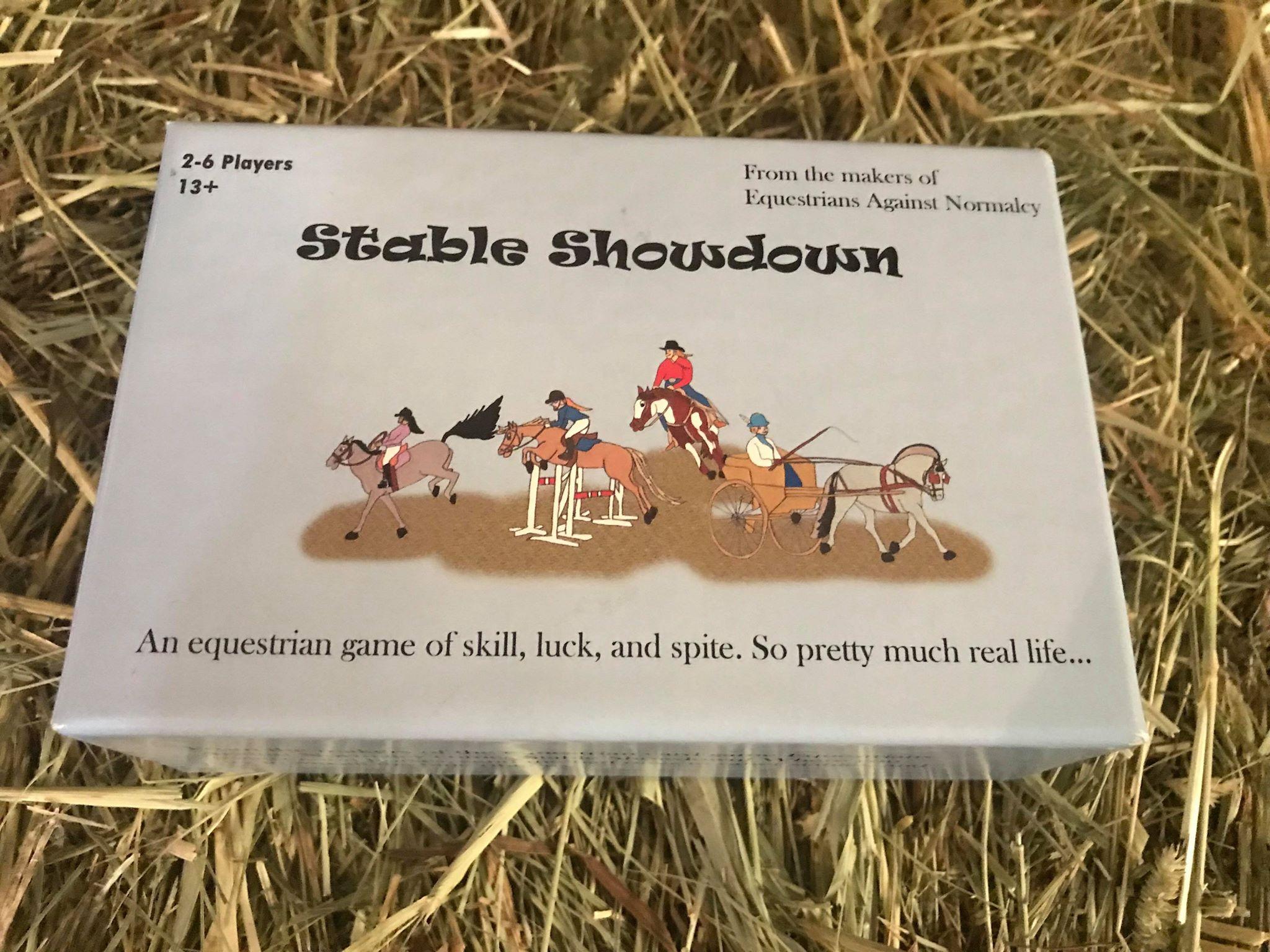 Victoria Morrow: Stable Showdown is your dream, or nightmare, come true. It is a table top (or hay bale top) game. You’re running your own stable and need to fill your stalls with the best horses you can. You collect perks like wash stalls and grooms and try to send the bad horses to the other stables; in the end, you want to be the one with the most blue ribbons. So it’s pretty much real life.

HN: How did you come up with the idea?

VM: With all the human — and equine — characters in the horse industry I swear sometimes it’s like we’re already in a game! Everything has been inspired by real horses, people and things that happen in the horse world. I’ve always loved playing all kinds of games, and over the years have played lots of games with funny characters that you use to gain points. I thought why not do something like that based on my experiences in the equine industry? And Stable Showdown was born. 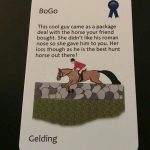 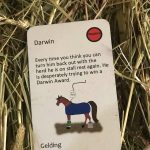 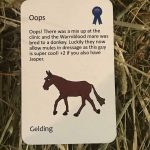 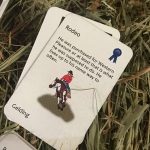 HN: Are you doing all the cartooning? Is cartooning a side passion of yours?

VM: Sadly, yes! Originally, I looked at purchasing stock images, or even hiring a cartoonist to do the illustrations. It turns out that the horses ate all the money, so I once again had to start cartooning. I used to do a lot of it years ago, but it had fallen by the wayside during my Lyme disease treatment. It was just too hard to hold a pencil like that. It takes me longer to do them than it used to, but you know what they say about more time than money.

HN: What’s the intended age range for Stable Show down? Is it the same target audience as EAN?

VM: Stable Showdown is aimed toward both adults and kids. Since there are some small parts and quite a bit of reading to do, it’s aimed at ages 13 and up. We’ve done a lot of local testing and everyone has had a blast! I think the biggest reason they’re having fun is that the cards are just so true — the horses, the people, the bad things that happen. We can all relate. 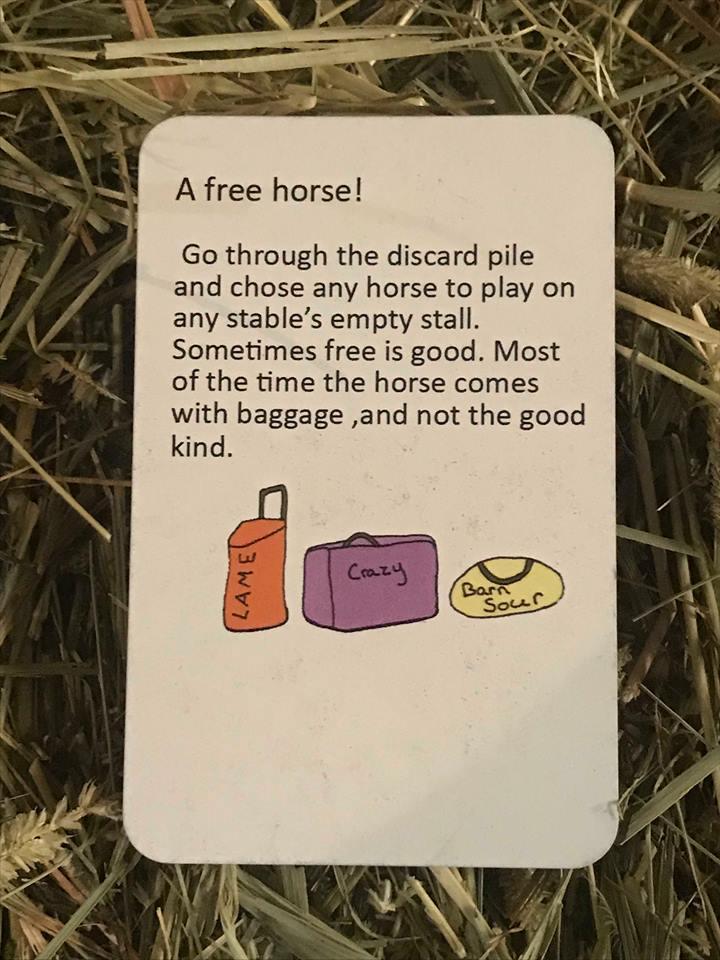 HN: Are you planning on going full-time into the game creation industry? Or holding on to the horsey day job?

VM: Oh, I am definitely sticking to the horse world! I don’t know what other industry would put up with me. I started to teach more clinics locally again, and have a fantastic group of students I’m working with. However, I do have some more games in the works, one of which is going to be aimed more at the Pony Club crowd, and of course more decks for EAN!  Along with the games I am also working on coloring books, and will be having some of the cartoons from Stable Showdown put onto T-shirts. What can I say — I like to stay busy. 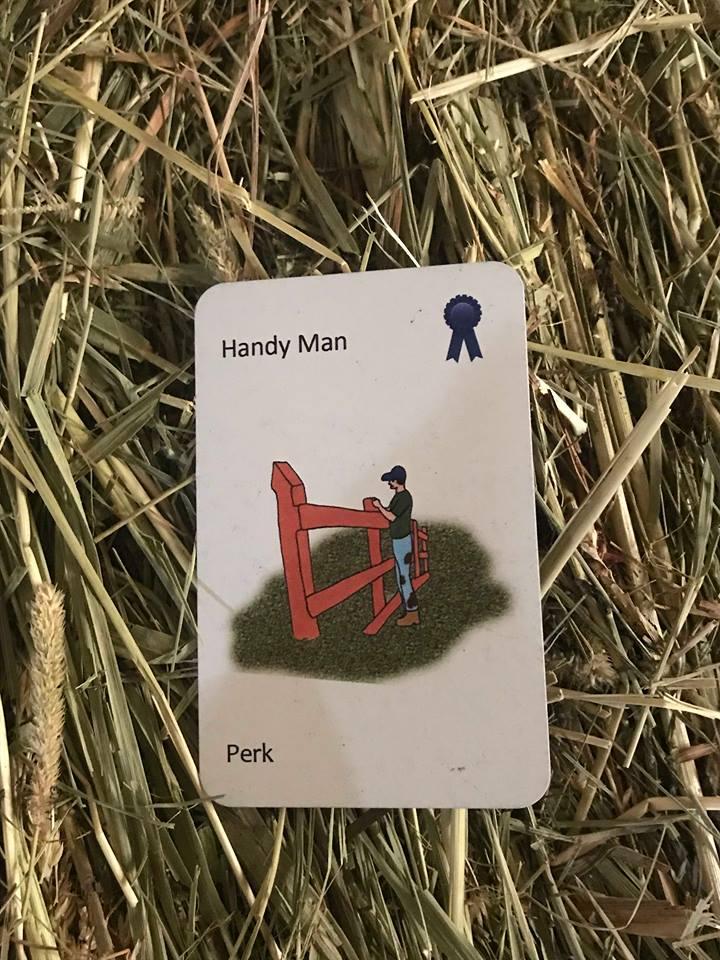 HN: How has this process been similar to or wildly different from the production of EAN?

VM: I would say this has definitely been a different experience than EAN. The similarities between making Stable Showdown and EAN are the insane amount of writing that goes into it before it ever even makes it to the home print phase, and then my poor husband and friends have had to put up with me asking them for help testing it out. Other than that I think it’s been a lot more work. The amount of cartooning, changing and adding of cards, and having to make an actual rules sheet was crazy. As soon as the weather started getting nice, I had to force myself to finish the drawings. Add in that I had to learn how to use Photoshop and Illustrator… let’s just say there were times I think the dogs were hiding from my yelling at the computer. 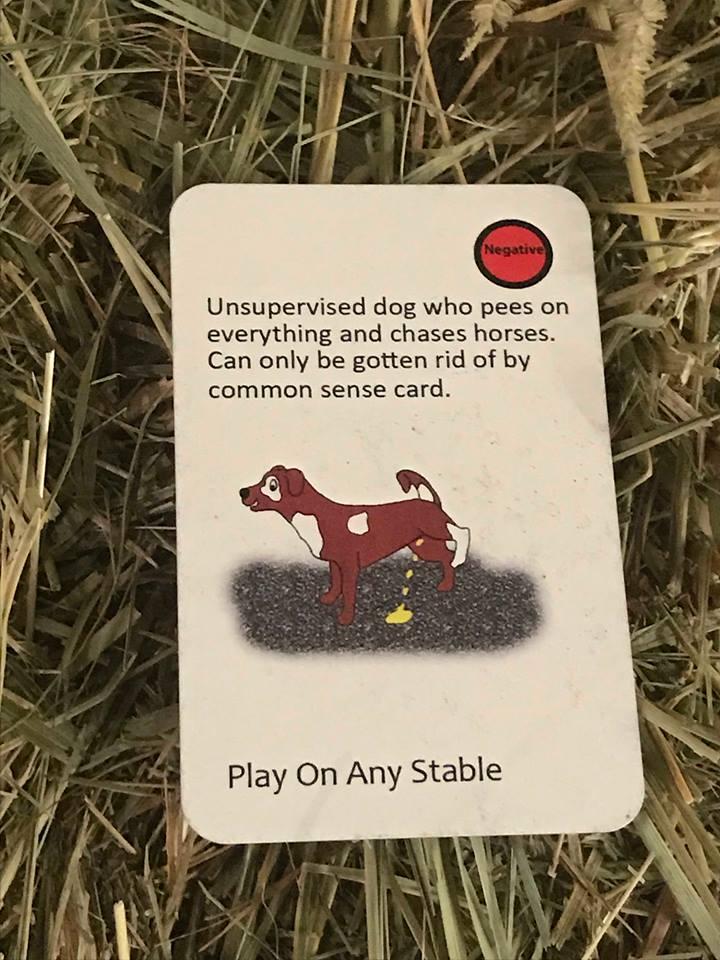 HN: What’s the timeline for Stable Showdown to be available?

VM: I’m really hoping for it to be available in time for the holiday season. Ideally, I’d love to have it released by October. Don’t worry — I’ll be keeping the Facebook page for Stable Showdown updated when it will be available.

We’ll have a sneak peek of Stable Showdown coming as soon as the game is available — keep it locked on Horse Nation, and go riding! 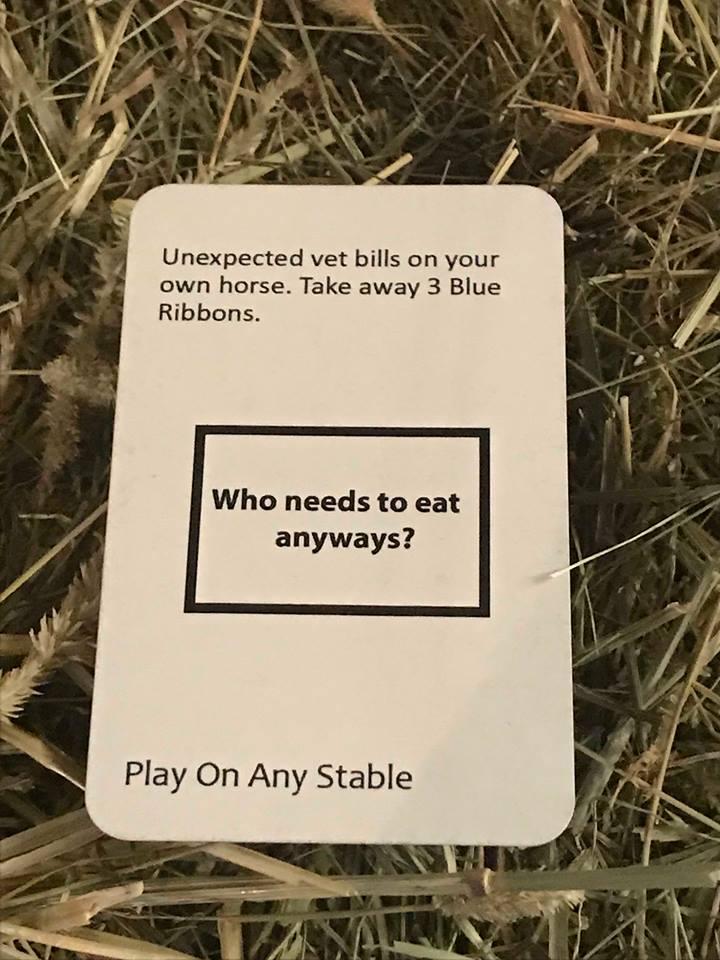