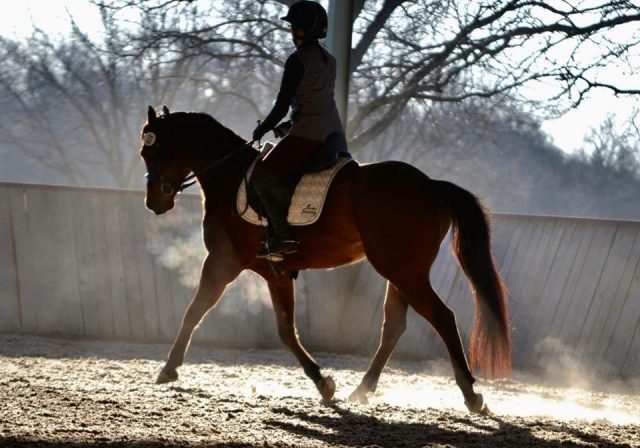 “’You know, helping these five won’t do much about the big problem with killer pens.’ But what a difference she made for those that she rescued!” You don’t have to be a rescue to make a difference: Melissa Walker shares her story. 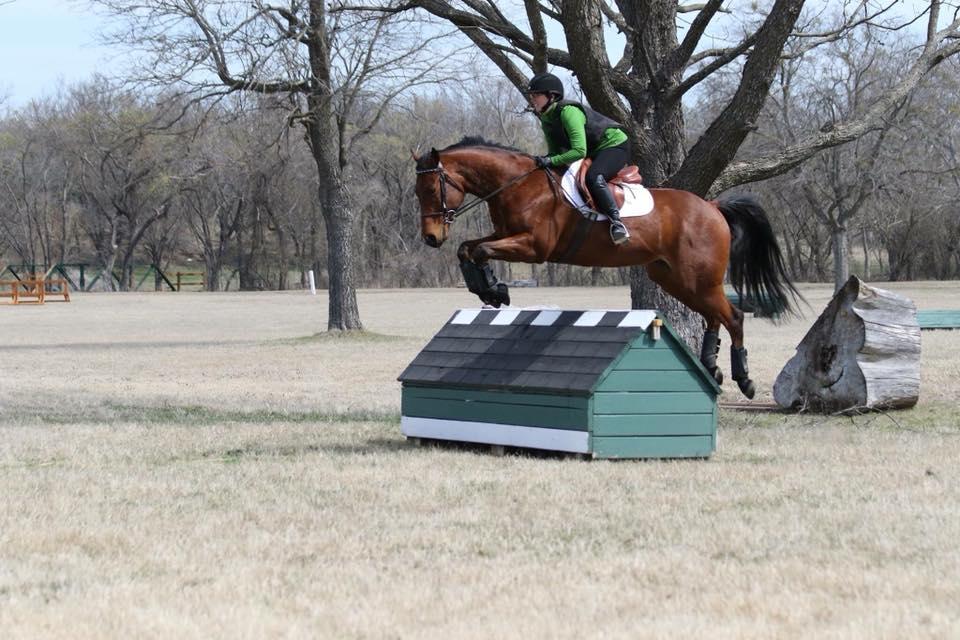 In January of 2014, I was more or less an adult working student for Gloria Beduhn, a seasoned dressage rider. She’s not quite a full-time professional, but doesn’t quite meet the amateur guidelines either. It was a good win-win situation for both of us: she and her horses were not as young as they once were and she enjoyed sharing her extensive knowledge, and I was too poor to afford regular lessons. In our arrangement the horses got exercised, chores got done, she taught, I learned, and I got my horse fix. All was good.

Around that time, a small herd of neglected-looking horses appeared in a field across the road from Gloria’s farm. It was mid-winter, the grass was dead, no hay was provided, the only shelter was a falling-down shed, and some of the horses were clearly sick. Other people would have minded their own business, but taking care of animals is Gloria’s business. She snuck them hay and did some detective work to find out who owned them. She learned that the owner was waiting for spring to take any survivors to the kill pen. When she finally talked to the owner, he actually charged her money to buy these starving animals. She literally paid money to save their lives. 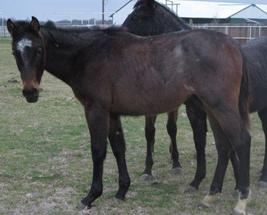 Belle at the time of rescue. Photo by Gloria Beduhn

Since the horses were sick, she couldn’t bring them to her main property with her other horses. She had to clear a separate piece of property she owned, fence it in, and construct a run-in shed. Then she had to get water to this area and purchase special food that would put weight on without causing founder or colic. We all had to be careful not bring the virus to the main barn, so we had to change boots, wash hands, and so forth. 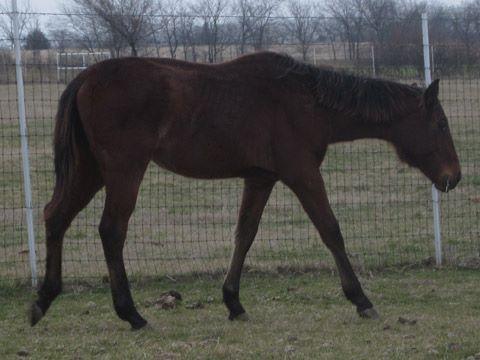 Rosie at the time of rescue. Photo by Gloria Beduhn

The new little herd consisted of five horses: a three-year-old albino colt, a two-year-old bay colt (both ungelded), a two-year-old sorrel pony filly, and two yearling roan fillies. The albino, Stormtrooper, was probably a POA cross; the bay colt, first known as Texas Bay or Tex, was an unregistered quarter horse; the chestnut pony, Ladybug, looked like she might have some Morgan in her; and the two roan fillies, Tyler Rose (red roan) and Texas Belle (bay roan), were obviously quarter horses but also not registered.

Trooper and Ladybug were quite friendly and acted like they had been handled before. Belle and Rosie were less friendly, and Belle took a long time to warm up to people. They were all sick, but Belle and Rosie were in bad shape. Eventually, some needed surgery. Tex was cryptorchid, meaning that he had an undescended testicle and had to have internal surgery to be fully gelded. Ladybug had a bone infection that needed a serious surgery with serious rehab. They all of course had to be treated for the virus. You can imagine that these little slaughterhouse-destined rescues now had invested in them as much money as some European imports!

As the herd matured and recovered, they were sent, one at a time, to a western colt starter named Sabrina Thiel for a few months of ground work and riding. When they got back home, it was my turn to start working with them. The colt starter did a great job, giving each one an excellent foundation. They all came back soft in the mouth, responsive to the leg, very quiet, and easy to work with. 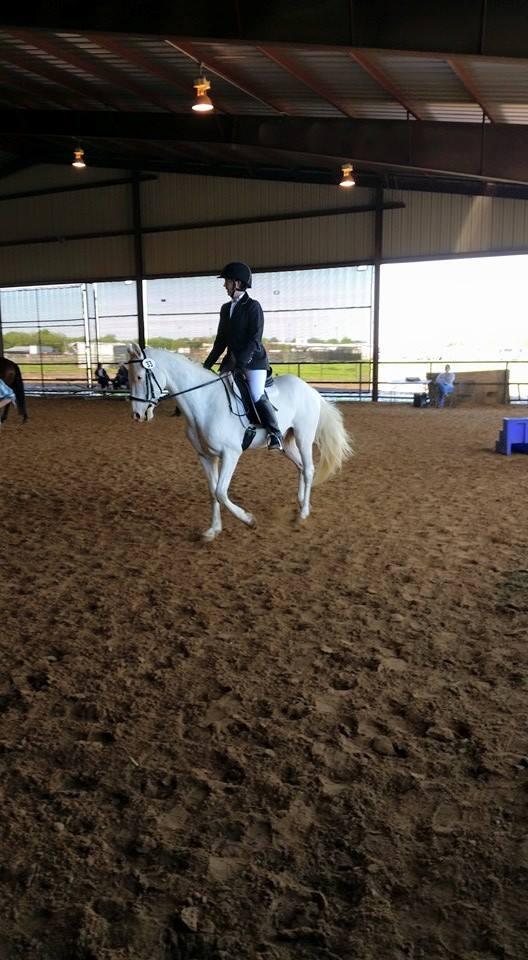 Trooper, back on his feet. Photo by Scott Walker

As the oldest, Trooper went and came back first. He was very good natured about everything, so he was a good first one for me. I had never worked with a green horse using classical dressage methods, and while I can say I did my best, that’s about all I can say. He definitely taught me more than I taught him. He was a nice mover, but was quite narrow and small. We had hopes for him as a therapy horse or a family horse. He didn’t work out as a therapy horse; there was too much mischief in his soul. He now lives with Rusty Morgan, whose family adores Trooper. Rusty describes him as “quite a character” and he and Trooper are teaching Rusty’s granddaughter to ride.

The next horse to go and come back was Tex, now known as Hero. While all these horses are lovely, he is by far the BEST. Yes, I kept him for myself. He came back from the colt starter in July 2015 and in December 2015 I was having a conversation with my husband about how we would be really stupid to pass up a horse this good. My little 14.3 unregistered quarter horse is now second level dressage, schools some third level movements, competes novice level eventing, schools training level eventing, fox hunts, trail rides, pony rides little kids… and is basically my best friend. He might be a tad spoiled as well. He’s my forever, once in a lifetime horse and I will have him till one of us dies. We both hit the lottery. 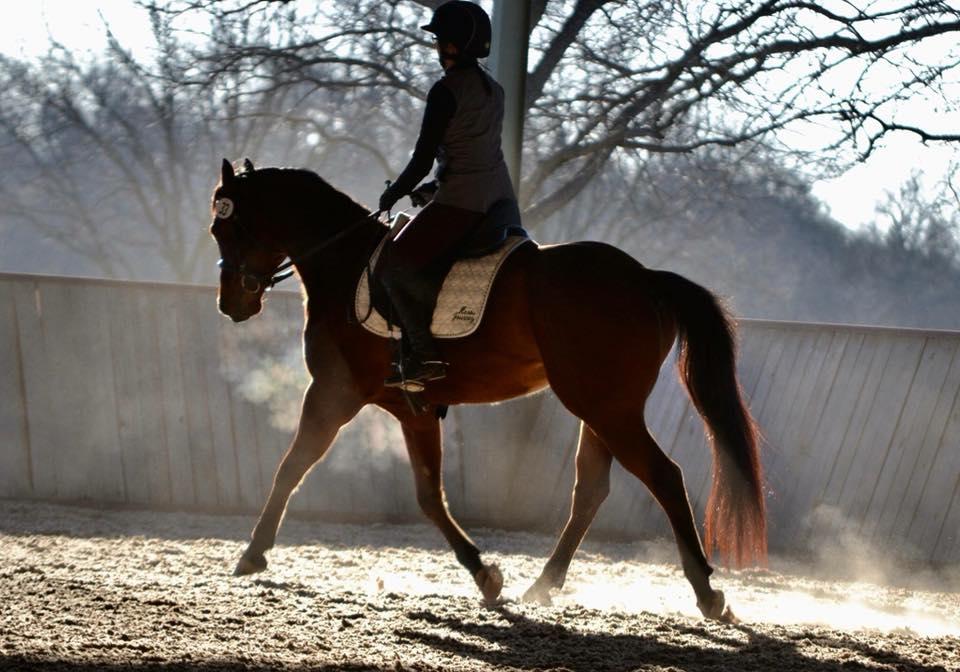 Around the same time that Tex/Hero went to the colt starter, so did Rosie. Rosie, who had been in the worst shape of the five, was super nice baby, and the trainer said if she had AQHA papers she would want to keep her for herself. She found a home very quickly with Barbara Carsten, an experienced rider who appreciated her training, her color, and her sweet personality. Rosie is now an experienced trail horse in the Hill Country of Texas. Barbara reports that everyone who knows her, loves her. 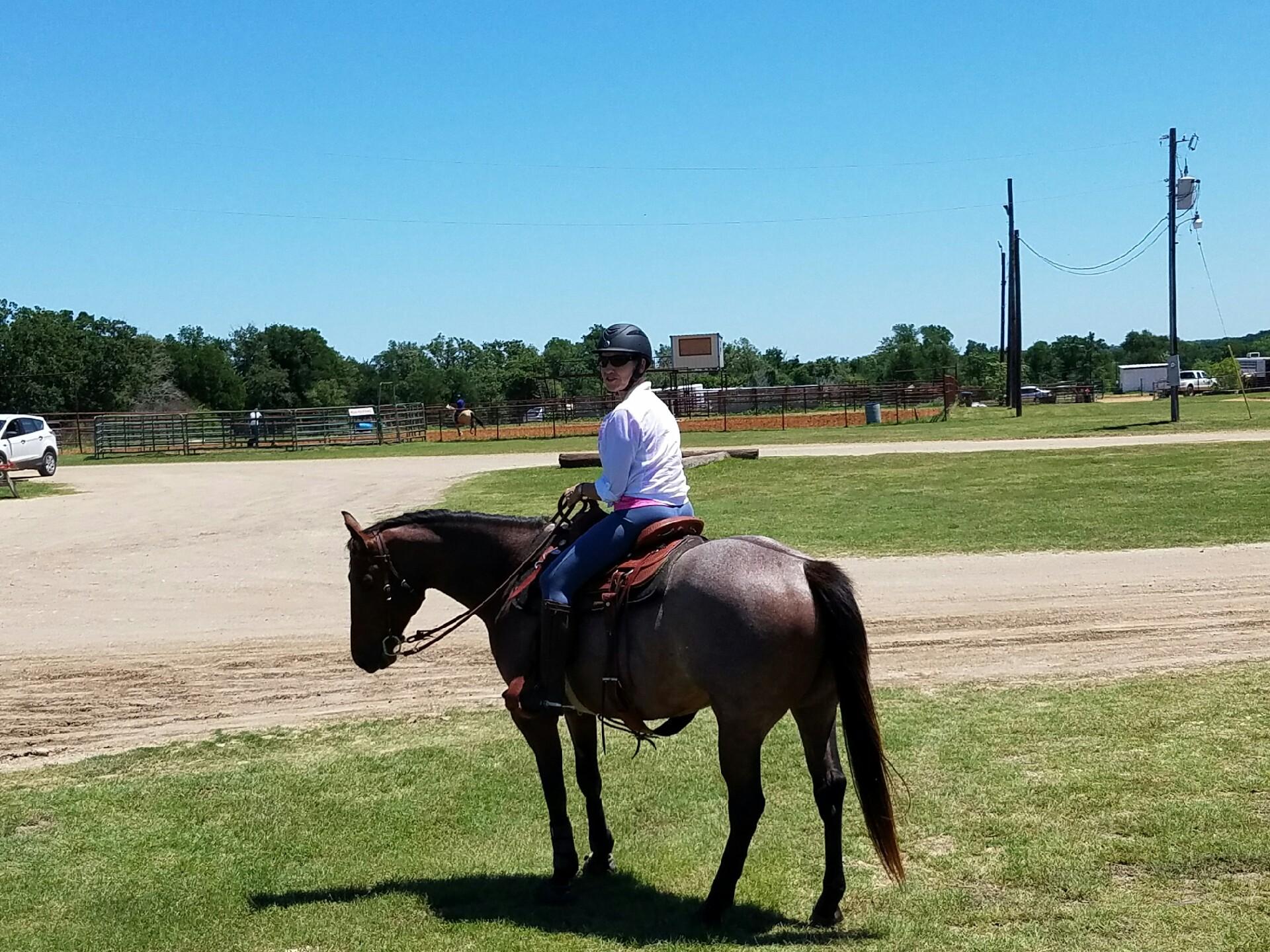 Rosie in her new home. Photo courtesy of Melissa Walker.

Ladybug was next. Ladybug is a redhead and an alpha pony and not particularly fancy. We knew it was going to be tough to find her the right home. Not for a beginner or a kid or the pony hunter ring, she needed somebody who could ride, but she was not fancy enough to be competitive in shows. It took a while, but in the end we found the perfect fit. Her owner, Brandy Lee, is an adult who had done Pony Club as a kid and used to event, but now wanted to do trails and mounted shooting. What??? I hadn’t realized mounted shooting was a thing one could do! When Brandy came out to try her, the soon-to-be new owner brought along her pistol and Bug wasn’t bothered at all by the loud reports. Brandy turned out to be the perfect home. 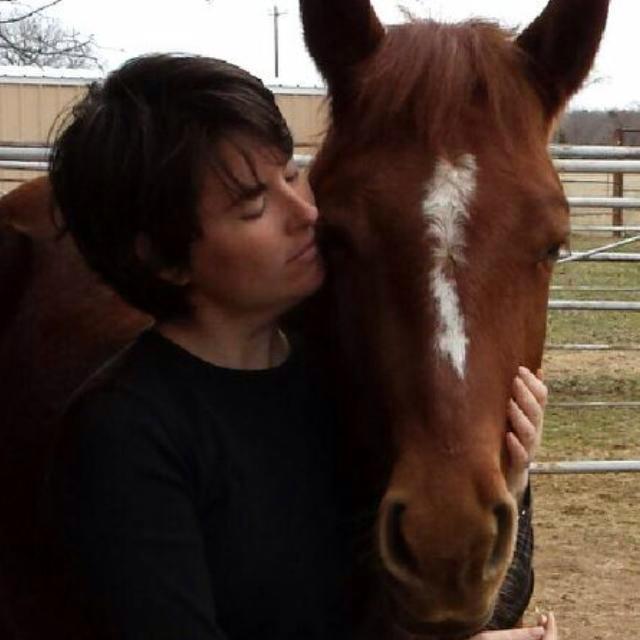 The last horse to mature enough to go to training and find a home was Belle. Belle was a very traumatized baby and took a while to learn to trust people, to trust the fly sprayer, to trust the hose, and to get comfortable in her job. We weren’t sure who the right person for her would be, but she has found a home with Pam Gold who is a police officer and does mounted patrol. Belle found someone she could trust completely. Right now, they trail ride and work with challenging obstacles, but Belle is going to mounted patrol school soon and hopes to become “Officer Belle.” At least, that’s how we refer to her at my house. 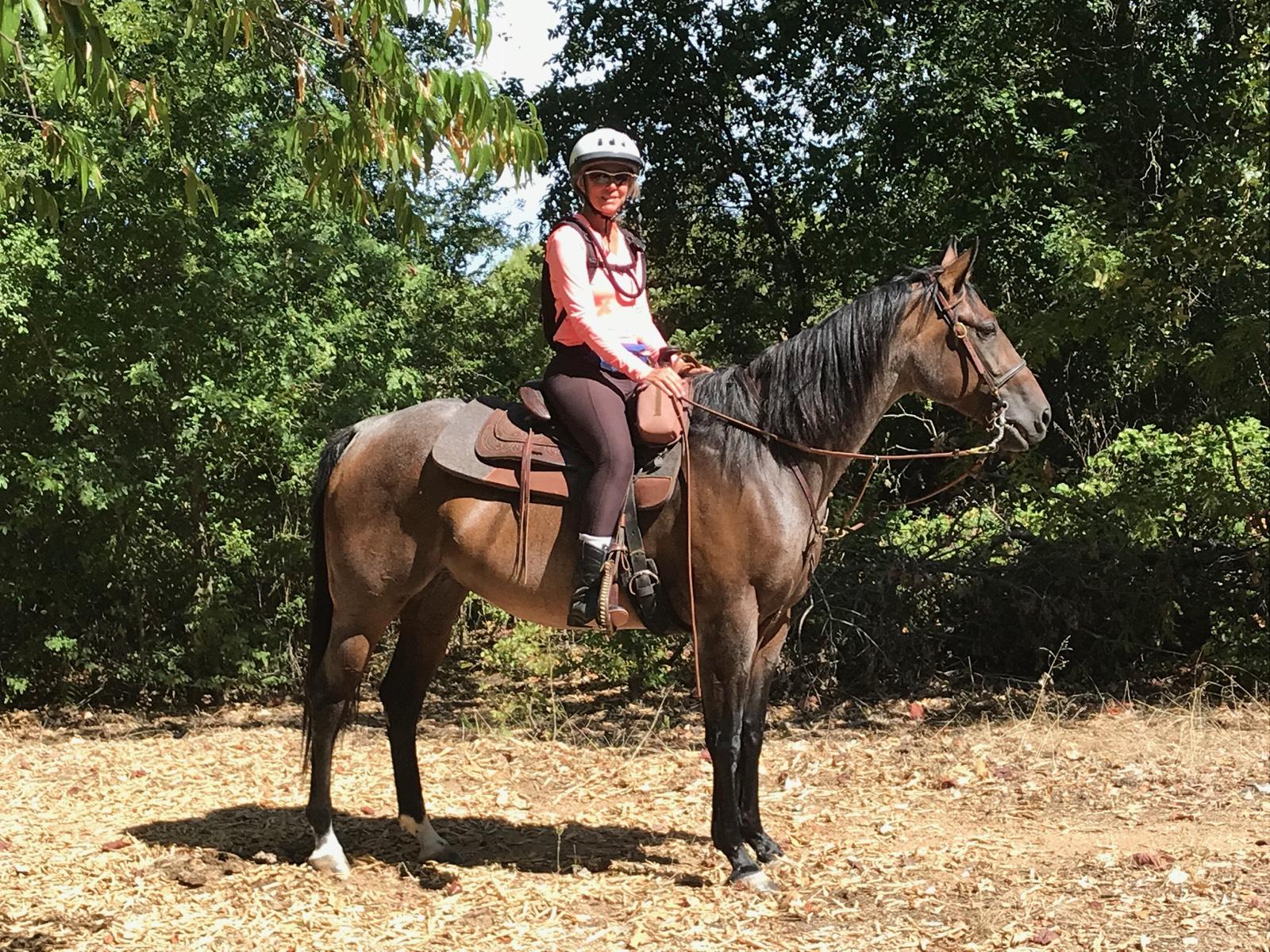 Belle in her new home. Photo courtesy of Melissa Walker.

This whole process took about three and a half years. I once asked Gloria if she knew how much money she had invested in them, and she responded “I intentionally never add it up. I don’t know and I don’t want to know. I would have done it anyway.” She told me when she first started this project, someone said, “You know, helping these five won’t do much about the big problem with killer pens.” But what a difference she made for those that she rescued!

I wanted to share this story because it’s a true fairy tale. Five horses headed for slaughter were saved by the kindness and generosity of one person and all found very good and happy homes, leading useful lives. And it’s a fairy tale for me, too, because five years ago I couldn’t afford to ride at all. But because of Gloria, her old school masters, and the rescue horses, I’ve gotten the dressage education that a person could only dream about, and my horse of a lifetime. Literally, money couldn’t buy the education that these rescues and Gloria have given me. Gloria has done as much for me as she has for them, and the horses have done as much for my training (or more) as I have for theirs.

A tribute to Trooper: after finishing this article, I learned that Trooper, the beloved clown and exuberant mischief maker, had to be euthanized after a devastating illness resulting in total blindness. He simply could not adjust to the darkness. We all miss him greatly.

Melissa Walker is the mom of two teenagers, two horses, two dogs, and two bunnies, and is married to the best horse husband ever. She competes as an adult amateur in eventing and dressage in North Texas. She is also a Licensed Marriage and Family Therapist, as a means to fund her horse habit (and maybe help some people too).

Is it “Your Turn”? We love publishing reader essays — send yours to [email protected]!