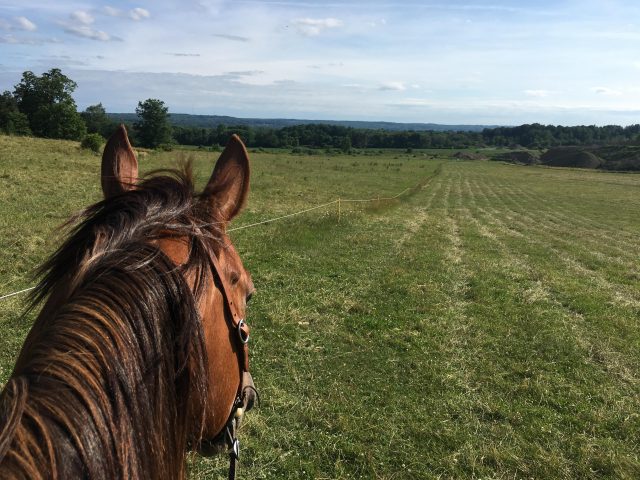 “If you want to go for a gallop on your Thoroughbred in the morning light instead of working on upward and downward transitions for another session, go for a gallop. Enjoy the ride. There’s more to this horse life than tomorrow’s training goal, after all.” 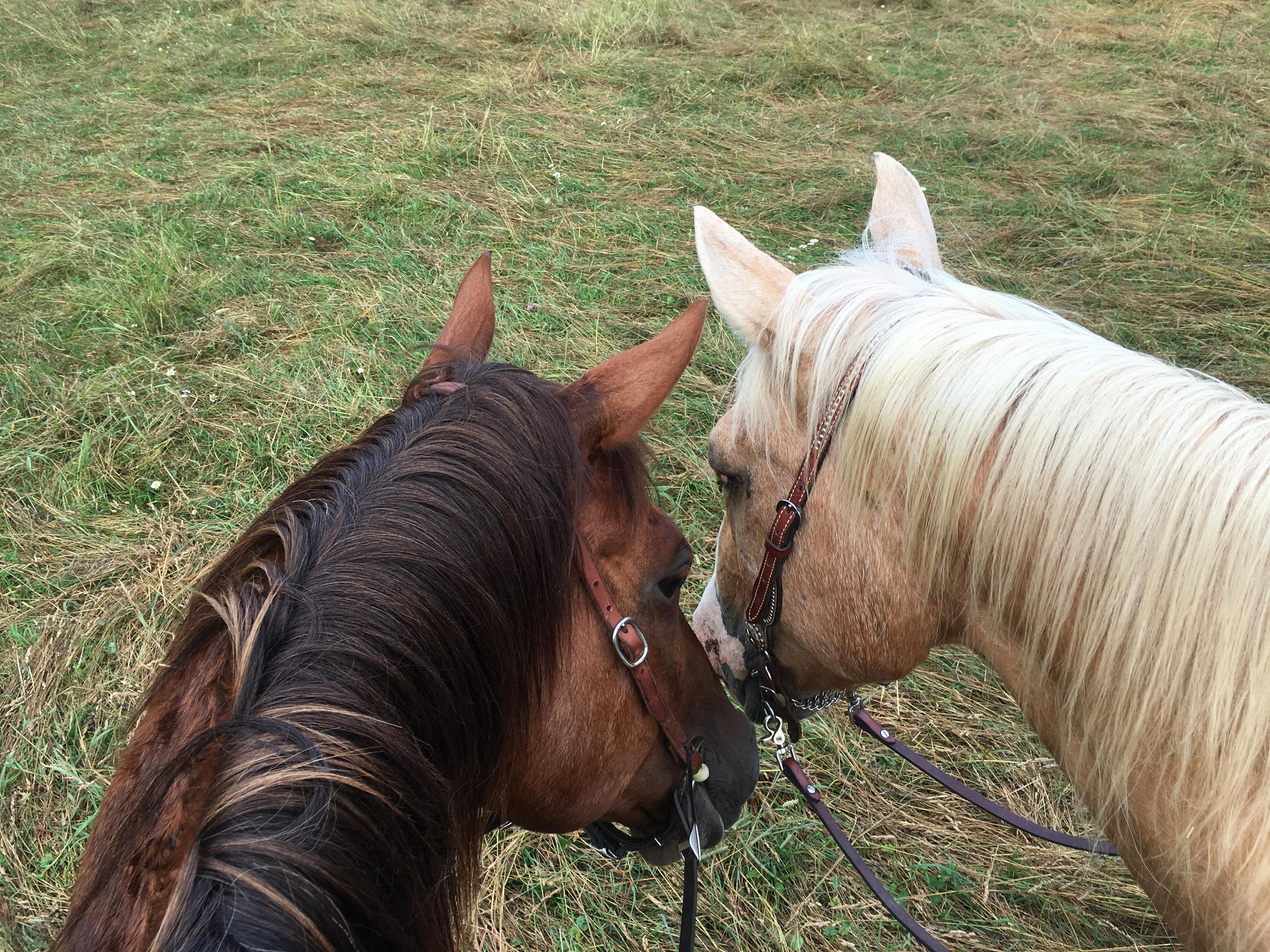 Jobber Bill: undefeated in match races with Winston, who is 27. Photo by Kristen Kovatch

All of the trainers in the Retired Racehorse Project’s Thoroughbred Makeover were sort-of-gently reminded on July 4th that the Makeover started in exactly 90 days. That feels like both a long time, and no time at all, and the reactions were mixed between sheer panic and resignation.

I’ve tried all along not to put too much emphasis on being show-ring-ready by October 4 — sure, I’d love to go down to Kentucky and put in a strong showing and have a chance at bringing honor to my Nation Media family and my motley crew of friends and family cheering me on from home, but at the same time I’ve tried to keep that competitive side of myself at bay so that I would remember that the end goal is not a big shiny Makeover ribbon (as badass as that would look hanging on my office wall) but a well-broke working partner that I could use around the farm, go trail riding with and maybe get back into the show ring with as well.

I’ve rushed horses before, employing various shortcuts and gadgets to get them into some semblance of what was necessary to cut it in the show pen. I’m not necessarily proud of a lot of this, and I’m also not saying I’m so old and wise now that I have all of the answers, but if nothing else I’m a living, breathing example that it’s okay to admit past mistakes, and you can always change for the better for your future horses.

Fortunately, Jobber has been the perfect partner for what I see as a bit of a personal redemption: I’m taking my time, trying to do things right, build on his skills slowly to make sure we’re filling in all the blanks as we go. As I’ve stated before, I don’t believe that training is linear, but cyclical, so even the analogy “filling in the blanks” feels a little forced — I’m sure I’ll have to come back through with an eraser and make some changes as we go. Such is horse life.

While I’m trying to worry too much about the timeline, it’s also simultaneously encouraged me, in cliche fashion, to seize the day. Faced with a round of stinky, sticky heat this week — like most of the country — I dragged my lazy butt out of bed early every day, hauled myself to the barn and tried to be in the saddle by 7 AM (I know for some of you real early-birds you probably already have a horse or two worked by then, but hey, baby steps here).

As I described in another piece in which I praised my own virtue as a morning rider, there are plenty of advantages to getting out there as the first accomplishment of the day. I feel like I’ve really made strides with Jobber in the past two weeks by getting him back into a consistent riding schedule — he got about ten days off when I went on vacation at the end of June, which I feel was necessary for both of us for a mental refreshening. 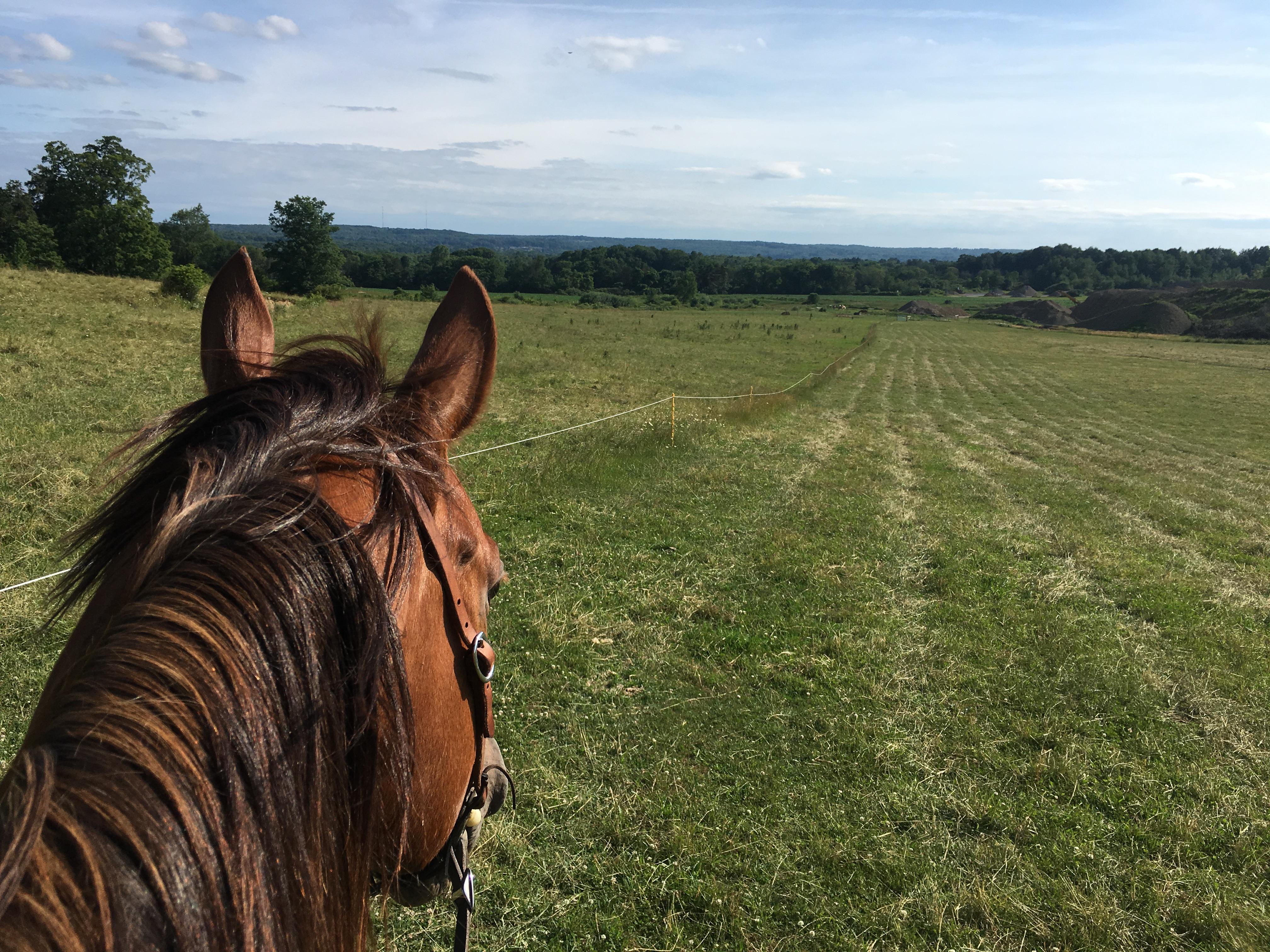 Back in the swing of things, we warm up with a lot of lateral walking work, followed by some long trotting up and down the pasture. Our trot work consists of a lot of circling, working on getting Jobber to “stand up” on his own by keeping his shoulder and hip aligned. Throughout all of this, I’m working on correct position of his hip, shoulder and rib cage — not his headset. If his body is correct, the headset takes care of itself, and when allowed to stretch and track straight, Jobber holds himself beautifully with his poll just slightly higher than his withers.

We’ve been working hard to develop a strong left lead at the lope, though the transition is still often a bit sticky. Fortunately, Jobber’s strong enough now to hold a consistent lope on both leads and lope casual circles, and we’ve even worked on a few simple changes with both leads — a huge step for a horse who only had a right lead at the beginning of the summer. This week, I’ve worked on lots of transitions up and down the pasture: transitions within the jog, plus transitions up and down with all three gaits, both leads and the halt. 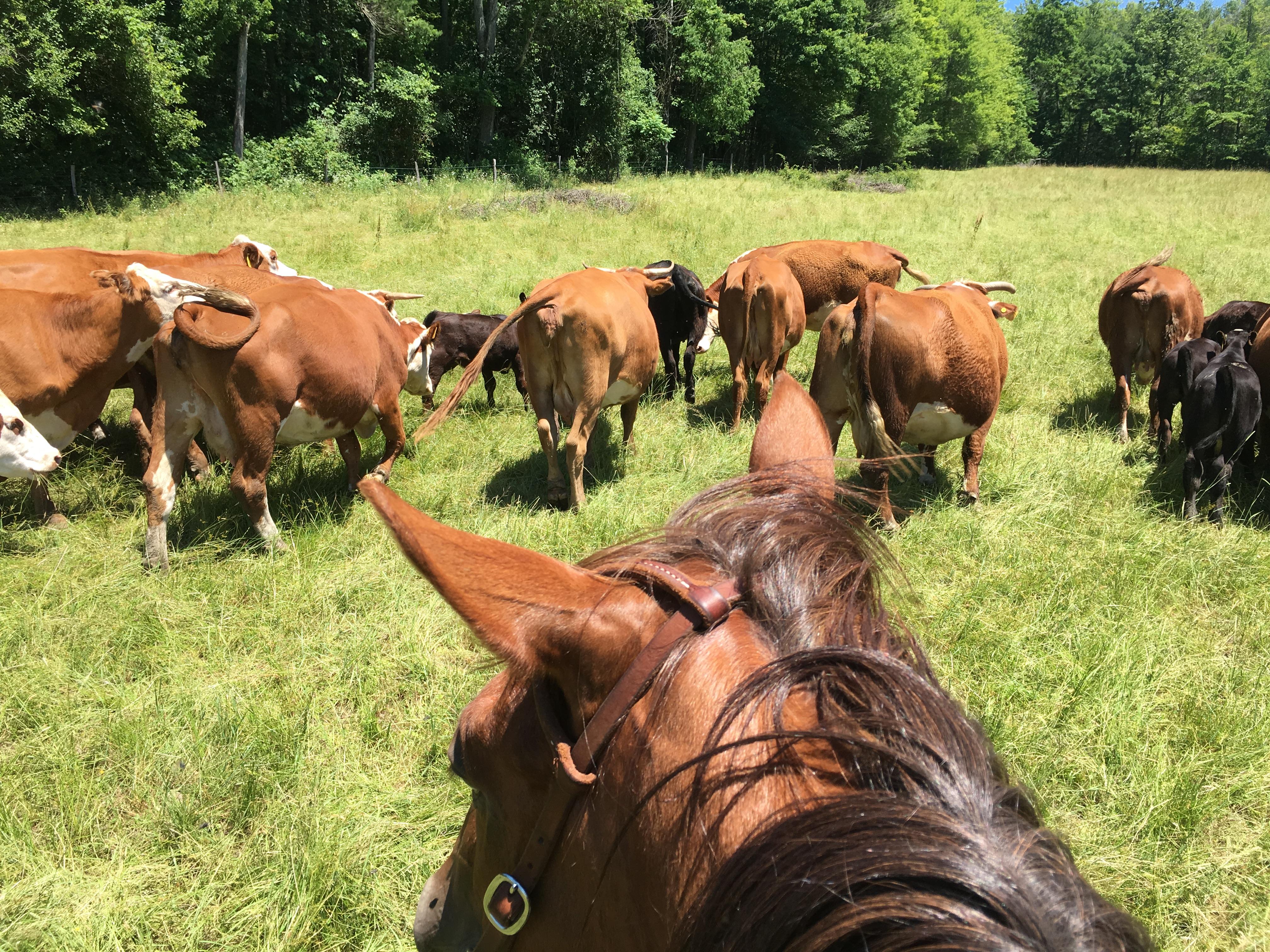 Jobber was a key player last weekend for the annual July 1 bull drive: for decades, Farmer Allen has been turning out his bull on July 1 so he can have a summer of love and so our cows won’t be dropping calves in the snow next year (hopefully). Despite the fact that July 1 was the hottest, most humid day of the summer, Allen would not be deterred, and Jobber and I stood quietly by the barn while the guys sorted out the bull, named Bon Jovi, and the heifers who would be accompanying him out to the pasture where our mature cows awaited their new paramour. “It’ll be good, buddy,” I told Jobber as we waited. “Just a twenty-minute walk and then I’ll give you a nice cold bath and you can go back out in the shade.”

Naturally, like most things with cows, it was not a twenty-minute walk, but an hour and a half session of total mayhem in which Jobber kicked a calf that tried to cut between his legs (hopefully it never makes that decision again) and another calf went missing along with a farmhand in hot pursuit (emphasis on the hot). There was a lot of sweating and even more swearing.

Amidst it all, as I reluctantly pushed my little Thoroughbred into a lope across the sun-baked field to attempt to singlehandedly bring the entire herd down to the lower gate, I realized that I couldn’t wait to spend the next few years working this farm on this horse: it was hot, it was sticky, we were all tired and a little grumpy with each other, and yet here we loped off with Jobber’s beautiful ground-covering stride, rounding up cattle like we were out on the plains. This horse has so much heart, so much loyalty and courage that even as I write this I can’t wait to go back and throw a leg over him again. 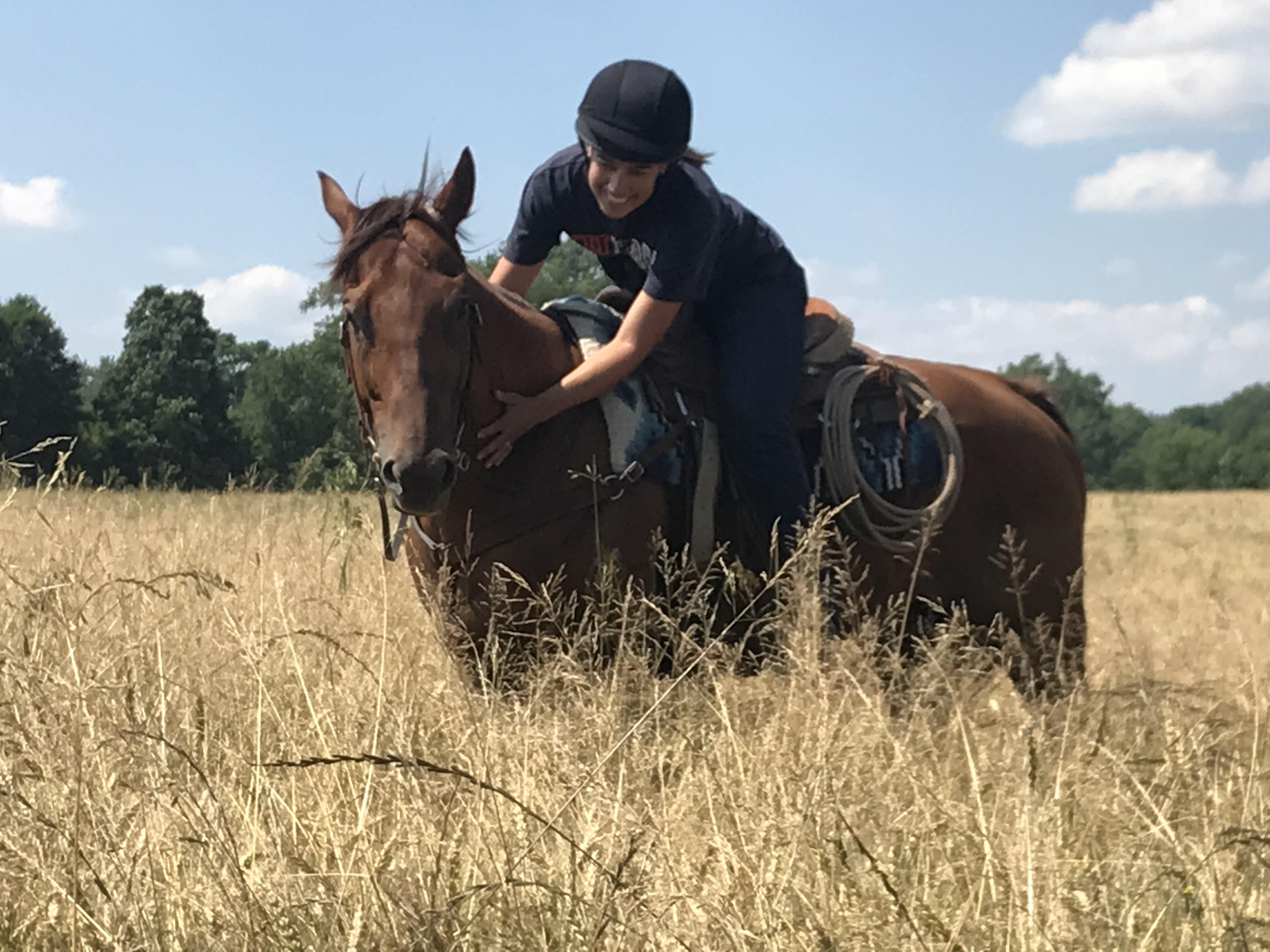 This morning, I had plans to work on transitions on a sloped hay field for an extra challenge. That was the plan, anyway. Instead, we wandered up in the morning mist to check on the cows, then wandered back to the sloped hay field, went for a nice breezy slow gallop, wandered amidst the round bales for awhile and poked our way home. The training field will be there another day.

I lost a beloved horse on Monday unexpectedly, and if his loss reminded me of anything, it’s that tomorrow isn’t guaranteed. If you want to go for a gallop on your Thoroughbred in the morning light instead of working on upward and downward transitions for another session, go for a gallop. Enjoy the ride. There’s more to this horse life than tomorrow’s training goal, after all. 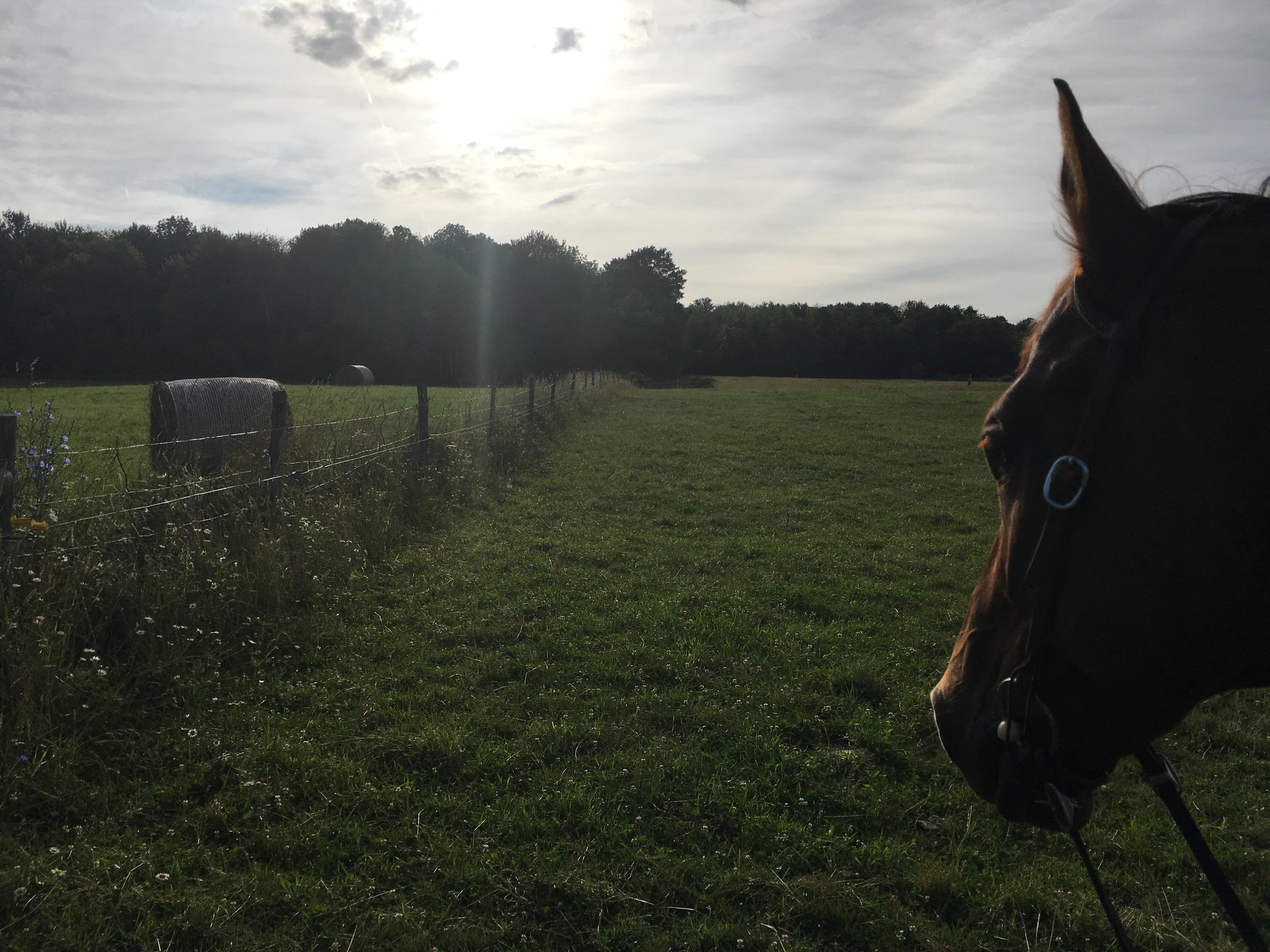 Follow Jobber Bill’s ranch horse adventure at his Facebook page as we prepare for the Retired Racehorse Project’s Thoroughbred Makeover!