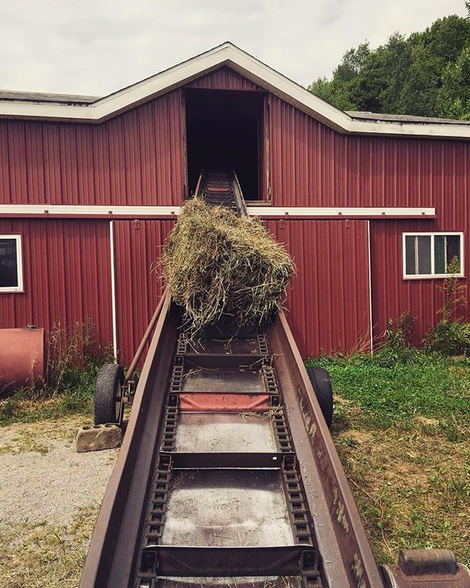 The cornerstone of equestrian life.

Hay: it’s one of the staples of keeping horses. If you’ve worked with horses long enough, you’ve fed hay, baled hay, bucked hay, thrown hay around the loft or storage shed, and you’ve certainly spent money on hay or hay-making equipment. Here are eleven truths that we hold to be self-evident about hay.

1. It will get in places you never knew it could. Bra, boots, pockets, plug for cell phone, teeth, ears, etc.

3. If your give your horse alfalfa once, it’s like giving him a hit of heroin. He will always be chasing that first high.

4. You will always run out of hay at the least convenient time and the emergency hay will always cost more than expected.

5. Even if fuel prices go down, hay prices always seem to go up.

6. If someone sells you hay as “80 pound two string bales,” the heaviest bale will weigh 67 pounds.

7. If you ever lose a bale of hay off the top of your trailer, you won’t sleep well for a week. (In reality, the bunnies on the side of the highway are just having a feast, but that bale COULD have flown off and killed someone.)

8. You will be amazed what you can find in a bale of hay… Google it if you’re wondering.

10. That line of compressed hay that gets caught between your tailgate and the bed of your truck really starts to stink after awhile… but not as bad as the hay that gets trapped in the front of the bed by the cab.

11. No one feeds Bermuda grass east of the Mississippi.