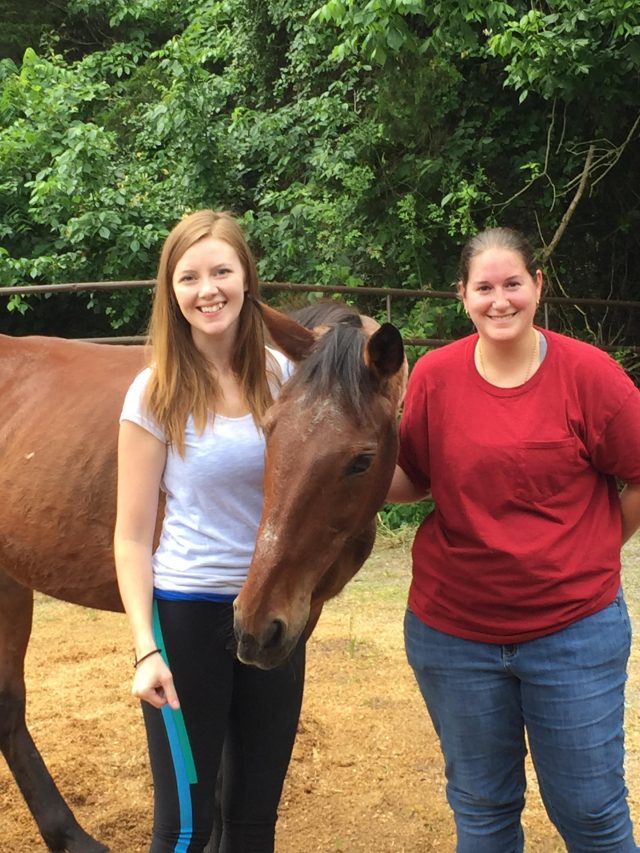 A life saved is a life saved — but the world of slaughter auctions and kill pen “bails” is complicated and often controversial. Esther Roberts outlines the problems and possible solutions.

Horses don’t live forever. Sad, but true. Some die from traumatic events such as a torsion colic, or debilitating ailments like Potomac fever. Some die from freak accidents despite the best possible care.

A fortunate few die of old age, beloved, in the field they were foaled in.

But the reality is, for many horses, they will have several owners and several homes over the course of their multi-decade lifespan. How those horses and owners find each other is as varied as life itself, from online ads to the “horse-next-door” to an international spare-no-expense search to, yes, the auction house.

Some auctions are known for the high caliber animals they sell, complete with high-dollar price tags proportional to the animal’s bloodlines and potential. On the opposite end of the auction spectrum are the “slaughter auctions,” where horses are sold by the per-pound price like cattle, loaded in semis like cattle, and taken across the U. S. border to Mexico or Canada where they are slaughtered for human consumption. (Some are shipped live to Japan and other Asian countries where they are slaughtered and processed.)

Whether American horses should be consumed by humans is hotly debated. Some say horses are “iconic” to America’s history, that it is against our collective culture to eat horse meat, and that horsemeat is tainted by phenylbutazone and other drugs that make it unfit for humans to eat. Others argue that horsemeat is considered a delicacy in many parts of the world and that America should get on board with this ideology and institute equine slaughter here.

One thing nearly everyone can agree upon is, at present, there are far too many American horses for the number of homes available. Overbreeding, long equine lifespans, and the burgeoning urbanization of America, along with the stark economics of owning a horse, all contribute to this issue. People opposed to equine slaughter often advocate for regulated breeding in the U.S. to try and address the overpopulation problem at its root.

Folks who are staunchly against equine slaughter, however, have yet to come up with a viable means to effectively deal with the 100,000+ unwanted animals that are sold for slaughter every year. That’s well over one million unwanted horses every decade in the United States alone: one million mouths to feed and house, one million bodies to provide medical care for, and four million feet to be trimmed or shod.

Online videos showing horses actually being processed through a foreign slaughterhouse are haunting, to say the least, as some slaughterhouses are poorly regulated for humane treatment, and many animals being processed are in the very prime of their life.  But for being unwanted and homeless, many of these animals have great potential as riding, driving, or working stock. Thus many people wanting a horse strive to find a “slaughter bound” animal to rescue. Like the story of the starfish, rescuing one horse will not solve the overpopulation issue in this country. It will, however, save the life of that particular horse. 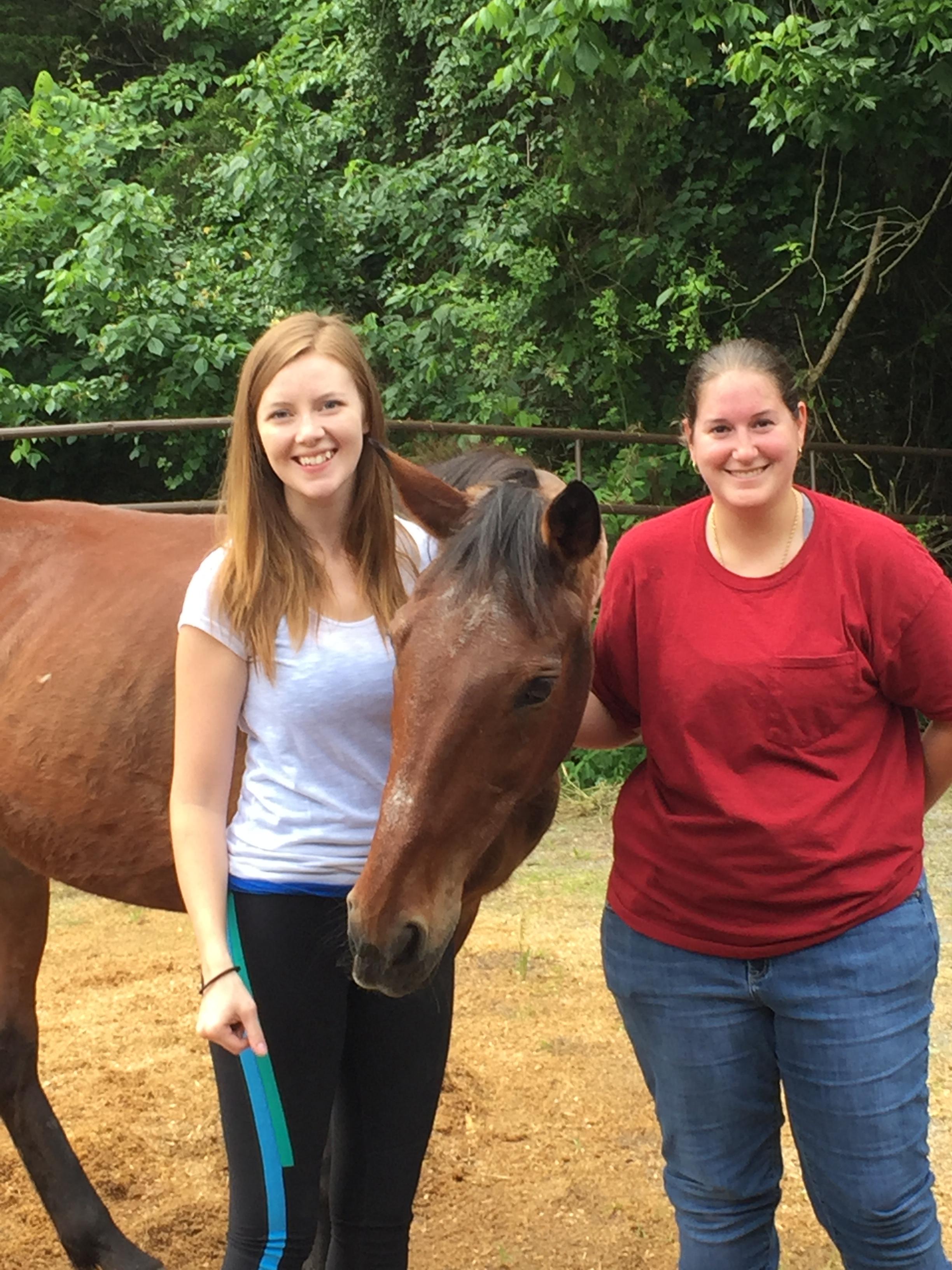 Henry, an off-track Standardbred, rescued from a slaughter auction. Photo by Esther Roberts

But what about the others? 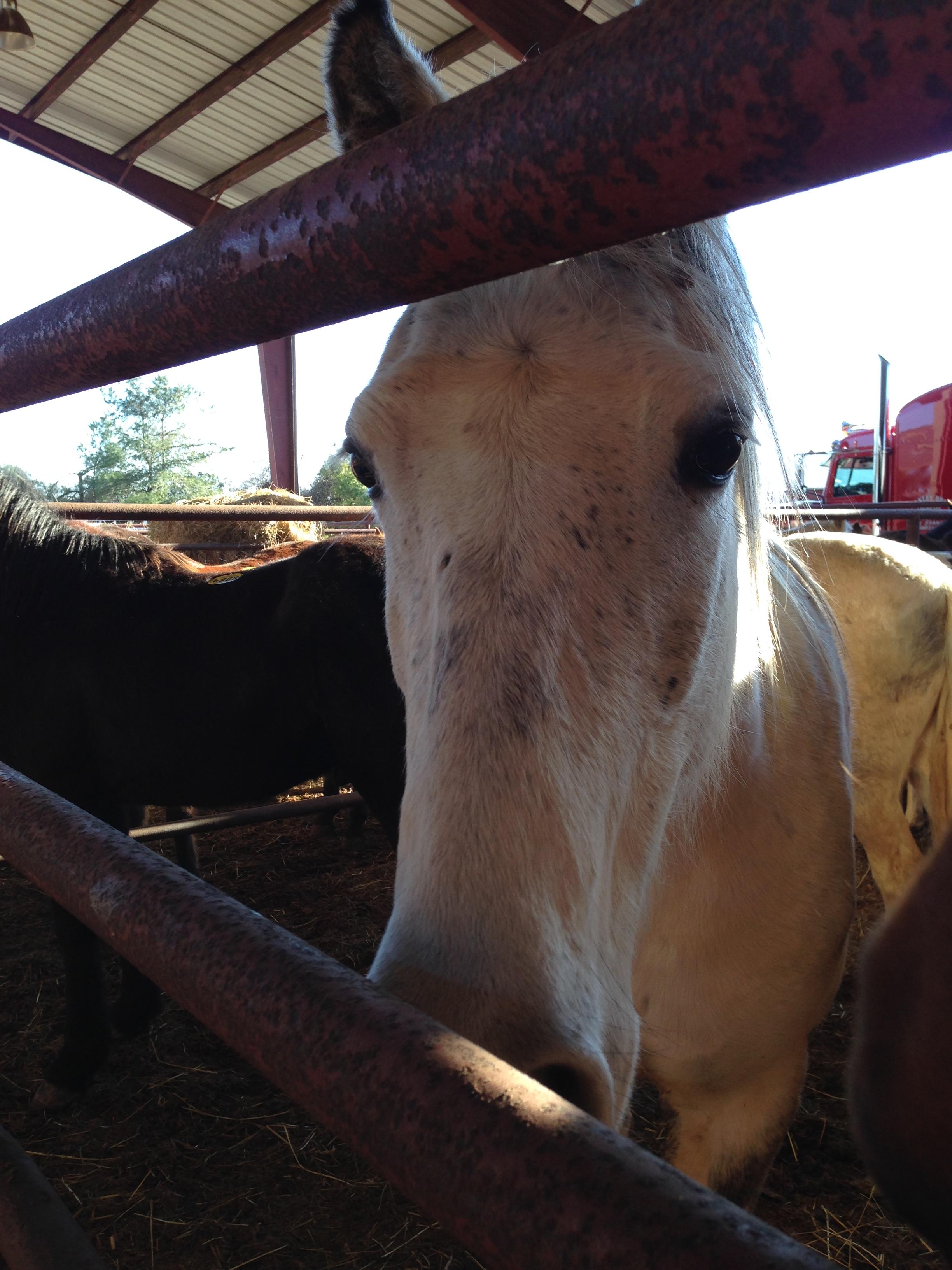 A few years ago, a new aspect of rescuing slaughter-bound horses arose, with, arguably, tragic results for many American horses.

The scenario uses social media to advertise a slaughter-bound horse that is almost “out of time.” An auction house takes photographs or video (or both) of a few horses prior to each auction with some version of an emotional plea: “Ships if not purchased by x date!” 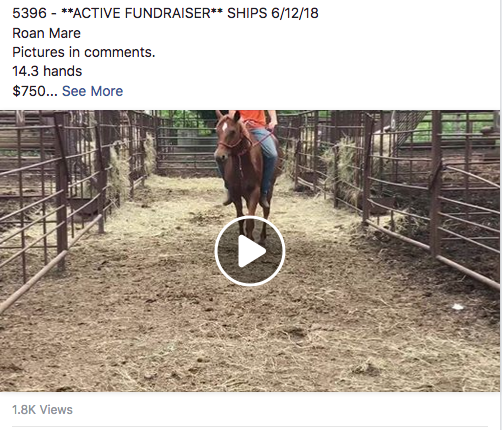 Screen shot of a kill pen ad on Facebook. Photo by Esther Roberts

Despite the per-pound cost of the animal being somewhere in the $300-500 range, these “kill pen” horses typically sell online for $700-1200 each, as well-intentioned horse lovers pay the “bail” money (and also, in many cases, quarantine costs and shipping costs to have their rescued horse delivered to them from the far-away auction house that advertised the animal in the first place.) The question then becomes: What happens to the profit the kill buyer just made?

Liberty Valance penned an article last year that provides many insights and details into this issue.

The summary version is this: Often times, the kill buyer takes the bail money and turns around and purchases several horses at their per-pound price to fill his shipment of slaughter animals. So, while the bailed horse is saved, several others are now being purchased with the bail dollars. In essence, the kill buyer is getting horses to fill his slaughter-bound load with zero cost to him. 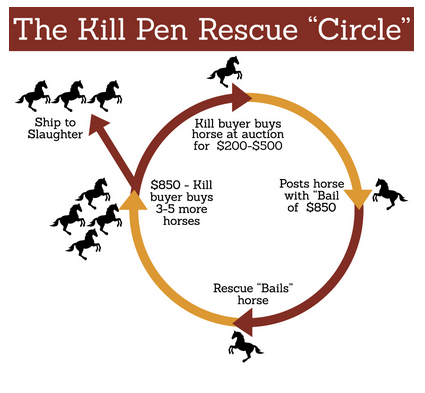 Graphic and accompanying article may be found at: https://equineassist.org/kill-pen-rescues-the-real-cost/

This is why some individuals and some rescue organizations will only purchase slaughter-bound animals directly at a local slaughter auction. There, they can usually outbid a kill buyer because the kill buyer will typically stop bidding when the price gets too high relative to the per-pound price. Outbidding kill buyers at auction is one way to directly save one animal’s life without “lining the pockets” of the kill buyer with “bail” dollars to facilitate the easy purchase of several more horses to replace the one just rescued.

Purchasing low-priced animals that are advertised on the local Craigslist or classified ads paper are also effective ways to “rescue” a horse that is at high risk of shipping to slaughter; kill buyers regularly scan such outlets for low-priced or “free to good home” ads. For aged or infirm animals, some rescue organizations offer low-cost euthanasia to provide owners in their community with a humane alternative to selling their horse at auction and running the risk the animal will be purchased by a kill buyer.

Deciding to rescue a horse, from any source and under any conditions, is an extremely personal decision. And there is no easy answer to the current overpopulation crisis. Respectful dialogue among all who care about the welfare of American horses is the key to solving this crisis. Until that day comes, however, slaughter auctions are a fact of life. Whether one rescues a horse at auction, or bails one online, is for each individual to decide.