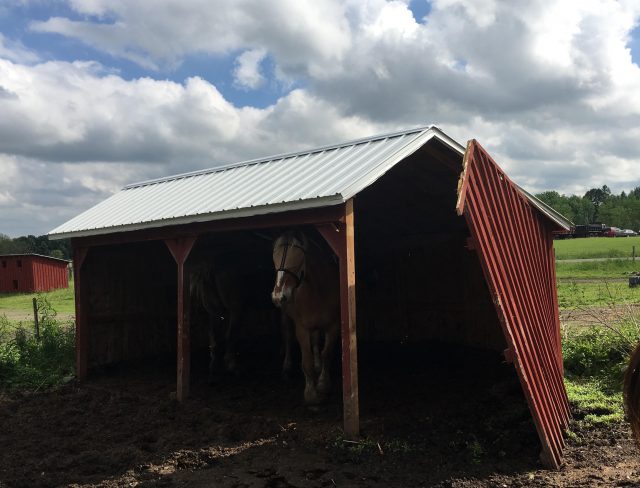 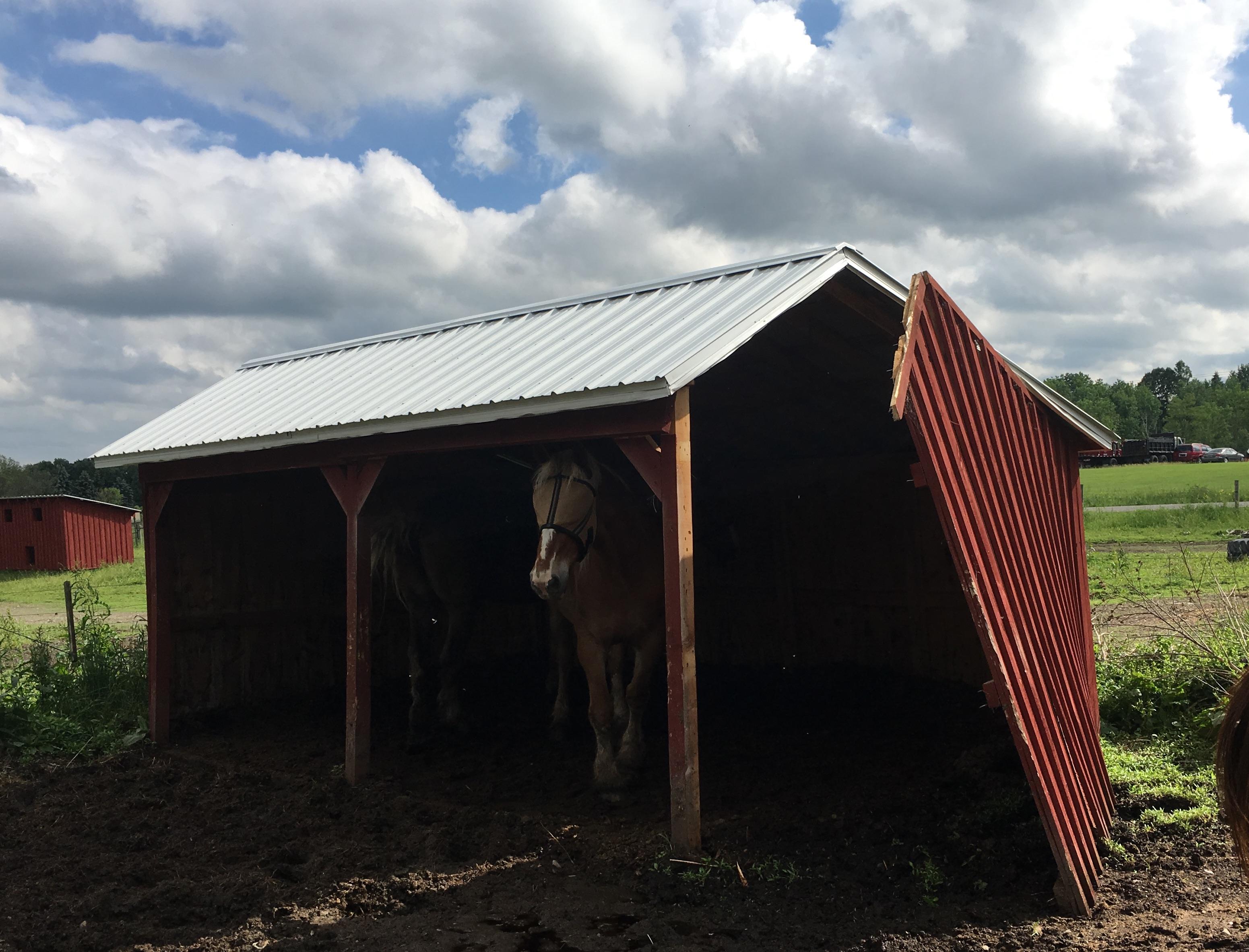 Please excuse the mud from a messy spring. And, you know, the giant broken shed wall. That’s the reason for this story in the first place. Photo by Kristen Kovatch.

Country neighbors can be funny things: first, they buy up all the lots they can on the road next to your farm because they love that nice rural atmosphere away from the bustle of town, and then the next thing you know they’re complaining about your tractor slowing down their morning drive to work. These are facts of life on the farm, which has been in my husband’s family since it was founded well over a century ago.

We do have plenty of good neighbors — the friendly folks who wave when they drive by, the friendlier ones who pull over to chat, and then those who go above and beyond the call of neighborly duties.

Directly across the street from us is the only other business on the road, a diesel mechanic shop that stays pretty busy. (Between this and the active farm itself, there’s plenty of bombproofing going on at all times for my horses.) The boss over at the shop, Vinny, is a farm-friendly guy; his wife and mother-in-law are true blue horse people and he’s constantly swinging by in his truck to tell me all about their latest equestrian achievements.

Memorably, he was also the star of one of our recent farm legends, in which a particularly wild steer attempted to jump a fence, hung a back leg, twisted himself up in the wire and was lying there trussed up by a hind foot on the road side of the fence in the snow with all of us standing around trying to make sure he didn’t get whacked by passing traffic in the setting sun as my brother-in-law worked quickly to cut the fence. Vinny had pulled his truck over with the headlights on so we could see what we were doing.

As soon as the fence was cut, the steer scrambled to his feet and in a moment of blind rage turned and charged right at my sister-in-law, who was barely able to get out of the way before the steer lost his footing on the cold road and slipped. As he was getting back to his feet, Grandpa Allen’s semi-domesticated border collie came streaking out of literally nowhere and helpfully started the steer at top speed down the road in the darkness, making tracks for the highway on-ramp at the edge of the property. Acting entirely on impulse and clutching a lunge whip in my hands, I took off after them, dimly aware that we made an odd parade of really angry steer, impishly joyful border collie and moronic young woman all sprinting down a country road in the snowy dark.

I heard the revving of a diesel engine behind me and veered off the road just in time as Vinny came roaring up behind, nimbly guiding his massive truck around the steer-and-dog show and jamming it across the road at an angle, moments before the steer would have made his bid for freedom and certain destruction on the interstate. Steer and dog lit off across the snow-covered pasture within our boundary fence and eventual recapture. Good neighbor.

A late spring — and a very damp one, when it finally arrived — slowed down the seasonal progression of farm life this year. Corn planting was delayed, which meant that setting up pasture rotation was delayed, which meant that me getting the horses pre-loaded on grass in a small paddock close to the barn was delayed in order for them to eventually get turned out full-time for the summer. I try to be pretty patient when the seasons get backed up, since our pasture holds up beautifully through the first real snowfall — it’s worth the wait in the springtime.

Unfortunately, the horses don’t really understand that when I explain it to them, and they spend their days as soon as it gets warm out clustered at the gate to the grass paddock casually banging their feet and being jerks. This is the time of year when bite marks start appearing in greater numbers; fly masks mysteriously go missing (how a horse can permanently hide a fly mask in a winter dry lot is completely beyond me).

And this year, the unfortunate target of my miscreant horses’ destructive springtime tendencies was my run-in shed.

The shed is a point of personal pride for me; I didn’t build it myself but it’s easily the biggest investment I’ve made in one lump sum for my horses’ health and well-being. It’s a solid little structure, painted barn red to match the rest of the farm buildings, and I still grin like a kid every time I see one or more of the horses standing inside peeking out at me. (I also throw up my arms when I come by in the winter to see them standing out in the blizzard with the shed completely empty, but you know, horses are idiots.)

I traipsed out last week to the dry lot only to see an entire wall of the shed hanging askew. Somehow, the whole thing was miraculously intact… but it was open like a second doorway, clearly the victim of some sort of slow-moving but Hulk-like strength.

I’m not pointing any fingers, except I am, and I’m pointing them at this big lovable tragically-clumsy boofhead. 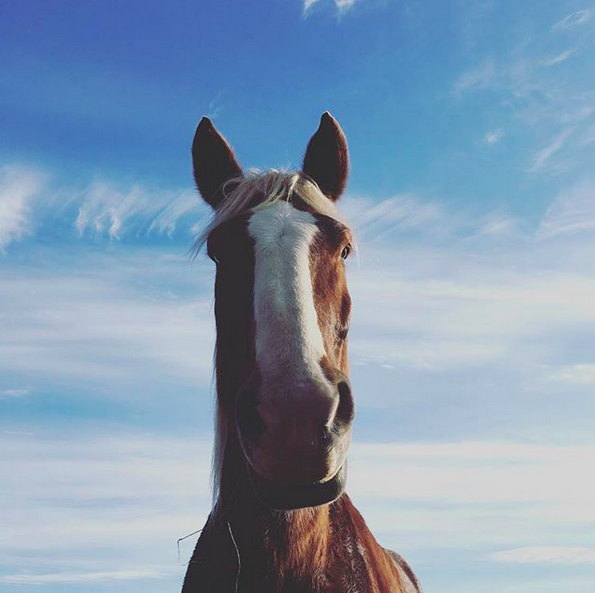 Anyway, the wall was basically hanging on by one side, terrifyingly-long nails pointed out like teeth. (Pro tip: encourage your craftsmen to use screws next time.) Naturally, it was 6:05 PM, which meant that our farm guys had gone home for the day. I was on my own.

Turns out, it’s amazing what one determined lady with a shovel can accomplish with a working knowledge of basic physics. I managed to lever the entire wall about three feet closer to the (now mysteriously crooked) support post on my battered shed using just the shovel, slowly cranking up the wall and wiggling it a few inches at a time, all the while with obnoxiously grass-hungry horses literally looking over my shoulders.

I glanced up to see a familiar truck sitting at the end of the driveway to the shop across the street.

Now, there have been many times in which I’ve speculated that the guys at the shop must think we’re totally insane over here. There have been multiple cattle drives to the barn gone wrong; the sundry moments in which you think you’re clear driving large equipment out of the shed only to discover that you’re not when you crash into the wall; the day Bill and I spent a disproportionate amount of time wrangling pigs. Fortunately, the Great Goat Escape of 2017 took place on Easter Sunday so everyone else was at home.

I imagine them sitting there, pausing their work for a moment to think to themselves what on earth are they doing? And this exact thought must have crossed Vinny’s mind, because a moment later he was striding across the street and picking his way around the barn to the dry lot to see if I needed some help. A few moments later, he was joined by a helpful employee.

With the application of a few extra boards, some rocks to serve as a fulcrum and a hammer to bang in the exposed nails, we had the shed… well, not as good as new, but at least safe enough to not hurt a horse for the time being until the herd got turned out and I could focus some serious time on getting it fixed up. I thanked Vinny and his employee profusely for giving up a beautiful afternoon after-hours to help their spastic neighbor with the horse hoarding problem.

Good farm neighbors are worth their weight in gold.