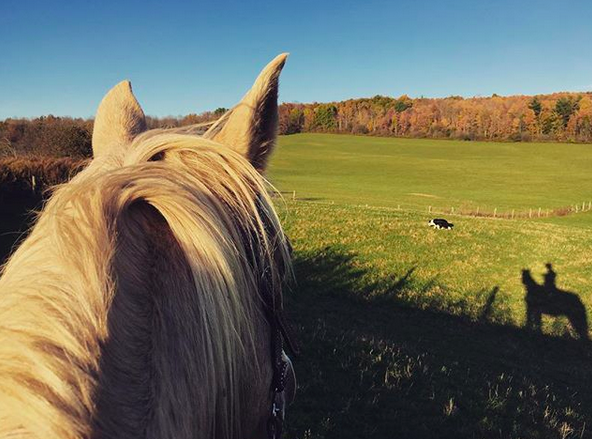 Winston, king of the naughty animals. Photo by Kristen Kovatch.

Since my last “Tale From the Farm”, a two-part adventure featuring a mass cattle breakout spearheaded by our bullheaded… well, bull, life had settled into a quiet rhythm as the farm transitioned from summer to autumn. The fence was repaired and the cattle moved back out to their fall pasture; the horse pasture was opened up to the full sweep of the hill. Leaves changed, some fell; the days grew shorter which greatly curtailed our post-work riding adventures as the sun set quickly, plunging the farm in twilight before we knew it.

I wrapped up the day a little early last Friday, a picture-perfect afternoon that was probably, in retrospect, one of the nicest sunny days of the season. Kaitlyn, my sister-in-law who’s formally gone into business with her grandfather to take over the family farm and keep it running for another generation, was enjoying a rare weekend out of town with her husband, attending a wedding a few hours away. She’d been gone a grand total of about two hours by the time I pulled in at the farm, so I decided to take her usual ride out for a hack before taking care of her usual barn chores — feeding her growing herd of goats.

We had worked out a pretty good system for old Winston over the past few years: my mother’s retired trail horse, Winston is a palomino gelding of indeterminate breeding (maybe a Quarter horse with a little Walker thrown in there somewhere) and indeterminate age (Mom worked out the math once and estimated that he could probably not be much younger than 25). The old man certainly creaks and pops a bit as he walks, but he can still master a fleet turn of foot from time to time and he genuinely enjoys working cattle. Anyone who says an old horse can’t learn new tricks should come meet Winston.

In the summer months, Kaitlyn rides Win two or three days a week, and I take over the ride in the winter months to make sure the arthritic gelding keeps moving with some light exercise. Due to some unforeseen circumstances, Winston hadn’t been out much this past week, so I decided to enjoy my Friday afternoon in a little ramble around the pastures with the old man.

Returning to the barn after a nice jaunt, we rounded the corner of the cattle pen to find Bill, one of the farm’s general hands who feeds the stock and helps with the harvests. He flagged me down immediately and we pulled up to see what was the matter. “Pig’s out,” he said simply, gesturing towards the cattle barn. Silhouetted in the center aisle I could see the rotund shape of one of our new feeder hogs, poking around the spilled corn under the mangers.

“Let me set Winston up in the barn and I’ll be right back!” In the horse barn, I pulled Winston’s tack and let him stand in a stall with his daily grain, as he was already cool — originally built for the farm’s working Haflingers many, many decades ago, our barn only has tie stalls, which I typically use just to set a horse up with feed while I take care of other chores. I left Winston untied in one such stall (he sometimes pulls back if tied), but happily munching his grain, which typically would buy me about twenty minutes.

In fairly short order, Bill and I had corralled the pig and managed to easily herd him back into the pen where he belonged. Cheered by our easy success, Bill headed off to continue his afternoon chores and I gathered up a bucket to collect some dried corn for the goats.

Turning back towards the horse barn from the corn crib, I stopped dead in my tracks. How long had this pig been standing here behind me, looking up at me and apparently just waiting for me to turn around? “BILL!” I screeched. “Pig!”

Carefully we tried to herd this fellow back the same way his compatriot had wandered, and eventually managed to get this fugitive rounded up too. Clearly, there was a breach in security.

In a few moments, I had found the section of pig paneling that the swine had managed to peel back and were attempting to now all jam their heads through at once. With some spare wire, Bill finagled some repairs and I turned back at last to the horse barn just in time to see Winston, clearly finished with his grain, ambling happily right out into the driveway.

“Whoa–” It was to no avail. Our wicked, geriatric old soul dodged around me easily and picked up a trot, heading straight for the horse pasture. I gave chase, with Winston always a step ahead of me — if I walked quicker, he picked up a jog; if I slowed down, so did he.

Finally, way down by the first gate I caught up to old Win and turned him right around for the long force-march walk of shame back up to the barn. Muttering about old horses with sassy attitudes, I rounded the corner into the horse barn with Winston in hand to meet face-to-face one of Kaitlyn’s young goats, turning confused circles in the middle of the aisle.

“Never leave me again,” I texted Kaitlyn, accompanied by a series of Snapchats.

Any time anyone tells you farming is easy, livestock raises itself or goats make cute, cuddly pets, kindly refer them to this piece.