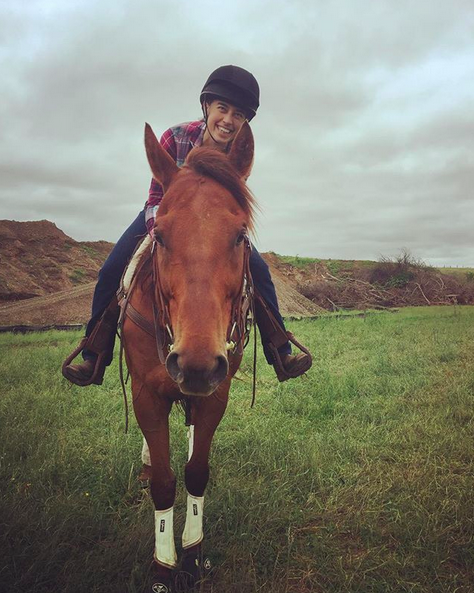 Kristen Kovatch shares some of the exercises she’s working on with her OTTB project Jobber to improve his flatwork, as well as his ranch horse life.

I’ve tried all along not to get too fixated on October’s Thoroughbred Makeover in the retraining process with Jobber — as I’ve stated, my end goal is not one big horse show at the end of the year, but a life-long working partner for riding around the ranch as well as taking to horse shows to help change western discipline stereotypes about what an OTTB can do.

Four months still feels like a lot of time to continue working on some of Jobber’s most outstanding weaknesses to get him ready to at least make a respectable showing — I’m not in it to win it, but to have fun, meet a lot of the people I’ve been following via social media and celebrate the off-track Thoroughbred while hopefully not totally embarrassing myself or setting Jobber back.

I’ve mentioned in previous installments about the exponentially-amplified changes I’ve been seeing in Jobber’s way of going thanks to lessons from my former boss Nancy. What I love about Nancy’s program is that, due somewhat to the difficulties in aligning our two wildly-varying schedules, she is not teaching us to be reliant on a trainer, but truly giving me the tools to practice and succeed independently between her visits and the freedom to move on at our own pace.

In preparation for writing today’s installment, I looked back at all of my previous chapters to see just how far we’ve come from when Jobber came home. Having never worked with an OTTB before, I tried to simply keep good horsemanship at the forefront and use the guiding principle of “make the wrong choice hard and the right choice easy.” Having some nasty winter weather keep me literally grounded and out of the saddle proved to be a blessing in disguise, forcing me to slow down and go back to form a stronger foundation of ground work and introductory ranch work, with more of the flatwork training only able to come into play in the past six weeks or so starting with long-lining.

Now that we’re further into flatwork training, I thought I would share the exercises I’ve been working on. For readers who are interested in retraining their own OTTBs, I also recommend checking out Clare Mansmann’s excellent series on choosing a horse and the first steps into the second career. 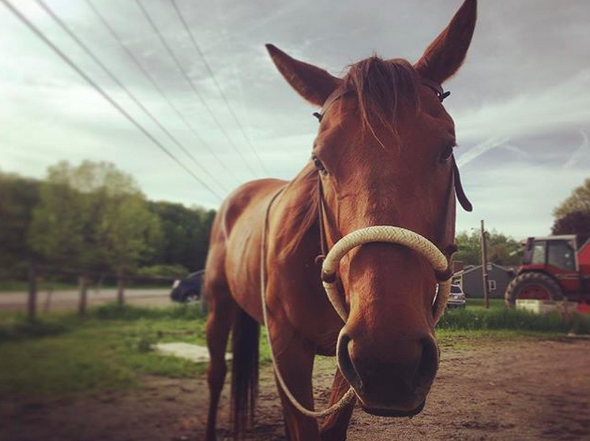 We also lost a few shoes this spring, which meant a few days of funning around in a bosal in the catch-pen close to the barn. Photo by Kristen Kovatch

I’ll preface this with my personal belief that flatwork is flatwork at the basic and intermediate levels, regardless of what discipline you’re working towards: barrels, hunters, eventing, ranch horse, whatever. We all want a balanced horse who can carry himself who’s light to the aids, soft in the bridle and willingly forward. After that, we can worry about specializing our flatwork to our specific discipline of choice.

All of my flatwork is done out in the pasture, seeking the relatively smooth and flat spaces to work safely while also having access to plenty of slopes.

Having finally grasped just what “light contact” should feel like, I’ve been working on several exercises with Jobber to get him flexible in his shoulders and hips, straight while turning and responsive to aids. He’s stiff in the bridle to the left, but weak on his right side; a recent chiropractor visit revealed that he was pretty far out in his right SI and he received a pretty big adjustment, which correlates with his reluctance and initial inability to pick up the left lead on command. These exercises will strengthen that weaker right side without ignoring his left.

At the walk, and now into the trot, I’m sliding the shoulders into a slight counterbend circle, with an inside opening rein and outside leg to push the shoulder. From this counterbend circle, I then push into a correct bend circle — adding leg which becomes the new outside leg, while maintaining the supporting opening rein and inside direct rein. Working this out of the counterbend prevents Jobber from tipping in like a dirtbike as he’s supporting himself from his shoulder rather than me pulling him around. If Jobber starts to drift, as he tends to do down the valley towards home, my aids can work in concert to push him back onto the straight-while-turning track.

As Jobber gets fitter, especially on the weak right side, and our lope departures are smoother and increasingly correct-leaded with every ask, I’m increasing our lope work to a few circles. In all of this, I’m careful not to drill these exercises over and over again — I try to vary our routine with some hacks, some mostly-walking trail rides and some cattle work.

After an early spring of me trying to ride Jobber with basically no contact, it was nice to check in again with his ability to carry himself on a loose rein after working on these exercises:

Anyone who has been reading along with my blogs on Horse Nation might remember that I had almost the opposite issue with Jobber early in the spring: I don't have an arena, just these big open pastures, and couldn't figure out how to get Jobber to feel confident and settled out in the field. I was expecting him to be able to carry himself happily out in space with zero guidance from anything like a rail, arena wall or, you know, my hands, and he just wasn't making that quantum leap to riding on little contact.Now after a few months of actually learning how to apply effective contact to help shape Jobber's body and show him what I'm expecting, he CAN happily carry himself on a loose rein, relaxed and happy, not anxiously drifting back to the gate for home. Thanks to Allison Everhart for the great visit this weekend and taking lots of photos and videos for me!

Interspersed with the above exercises, I try to keep Jobber’s riding life fresh with plenty of other little asks around the farm.

Actual footage of me getting dragged back into the work week.This horse ❤️ Hot and humid today (plus we're still missing a shoe, again) so I wanted to keep our session brief, low intensity and close to home. This is a skill I've been intending to introduce for awhile but never anticipated that Jobber would pick this up so quickly and readily. I've been inspired so much by Dale's recent posts at Gate to Great/Horse Creek Thoroughbreds and his work turning racehorses into ranch horses; his recent posts about spring brandings reminded me that there was no time like the present to start working on this particular skill.

Our cattle work started with the basic “cow moves, you move; cow stops, you stop” principle, which Jobber has taken to really well. I can drop my hand and he will track a cow around the pasture now with little input from me. The next step is getting him to take a little more “ownership” of the cow and move in tandem with it rather than just behind it, which I’m introducing with a little keep-away cutting: we choose a cow, get between her and the herd, and practice moving, stopping and turning her keeping Jobber’s body parallel and mirrored to hers.

Jobber did his first real ranch job a few weeks ago when we brought our herd of cow/calf pairs down to the barn for vaccinations, ear tagging and castration, and he stepped up to the plate very nicely. We had one runaway double back on us and waddle back to the pasture, and Jobber gamely chased her down and made a very nice trot-halt-turn with very little guidance on my part. I’m really proud of this horse’s developing ability to read cattle and his apparent enjoyment of chasing them around!

Working cows also helps Jobber apply those flatwork concepts to a real-life scenario that probably makes a little more sense to him than arbitrary circles in the pasture: he’s getting lighter in the bridle and much more responsive to all of those practiced aids when he gets to put them into practice.

Follow Jobber Bill’s ranch horse adventure at his Facebook page as we prepare for the Retired Racehorse Project’s Thoroughbred Makeover!

BONUS: not only is Jobber good at dragging logs, but I'm terrible at judging space. I managed to drag the log right into the practice bridge that was supporting my phone camera…but that gave us a chance to take a selfie like a pair of lovable idiots.