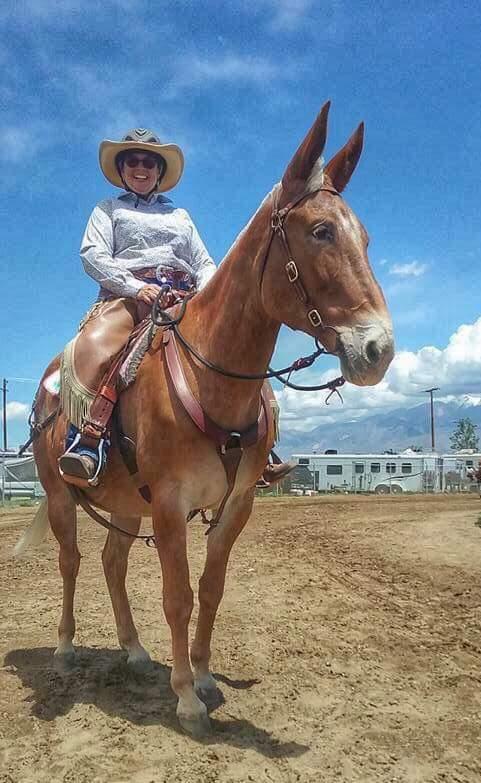 Over Memorial Day weekend I drove to Bishop, California to support my bestie, DiAnna, who was entered in a few classes at Mule Days. If you’ve never heard of Mule Days, let me tell you all about it: Mule Days is an annual event where hundreds of mules and donkeys get together and compete in various events. It’s the largest long-eared celebration you’ll ever find. It’s the mecca for all long-ear lovers, and because mules always will take the perfect opportunity to make a complete fool out of you, the whole event is very entertaining and funny. To own a mule, you must be very humble and have a great sense of humor, otherwise, you just won’t make it.

I myself am not a fan of competing. I used to when I was younger, but I’d much rather trail ride than spend all day sitting around waiting for my chance to ride in arena for two and a half minutes and have to pay for the privilege, plus having to groom my mule and myself to look halfway decent in it. Now, just because I myself don’t like to show, doesn’t mean I don’t fully support the idea, especially when my bestie decides to do it and this is her first show. So I came to Mule Days to see her and support her.

DiAnna has two mules,: a big Appy mule named Red, which her husband rides, and a bay mule named Gus, that she calls her “million dollar” mule, because even if you offered her a million dollars for him, she wouldn’t sell him. Gus is a very special mule. He’s helped her rebuild her confidence after numerous horse wrecks and he is as solid and calm as you can find. She’s owned Gus for a few years now, and I’ve never known him to do any wrong. He’s really the mule everyone could hope for.

Well, Red the Appy mule is just used for trails, but after weeks of working with Red in the arena, DiAnna was ready to try him out at Mule Days. Red walked into the arena for his class, and every obstacle he was presented to, he replied with a big, fat “nope.” To give him credit, he DID trot over the ground poles, but besides that, he wasn’t having any of it. He did have a nice, calm demeanor in the class, and looked pretty snazzy all cleaned up, and DiAnna stayed calm and focused even when he was being defiant, so I guess the judges had pity on his poor soul, and decided to tie him for last place instead of reserving it solely for him.

After that, it was only up, up, up for DiAnna. The next day it was Gus’s turn to show, and DiAnna got past her first-day jitters and was feeling really confident. After all, she had been practicing all year long and she was on her wonder mule Gus: Gus the mule that never spooks, never does wrong, Gus the mule that makes my own mules look like wild water buffalo.

DiAnna decided to warm up early with Gus. She took him into the round pen and he responded nicely. After the round pen, she wanted to open him up in the big arena, which we were quickly asked to leave since a class was about to start. We were allowed to warm up on the backside of the track that goes around the whole arena. I got on him and breezed him up and down the track to blow off any steam, and then let DiAnna climb aboard so she could work on his trotting and loping on the correct leads. On the first turn on the track, there was a young girl on a really flashy paint mule, loping it in circle after circle, after circle. He trainer was getting upset at her and made her get off, and he climbed aboard and proceeded to yank on the mule’s mouth and spur the snot out of it to get it to comply, even though to my eyes the mule was being perfect. We stayed away from that whole ordeal, and gave them their space.

DiAnna was warming up nicely and looking good. She stopped for a moment and was just resting, when all of a sudden, a lady walks into the arena with a mini donkey, and a dog the same size as that donkey. That donkey really must have been the devil incarnate, because once Gus saw it, he said “PEACE OUT!!!” and exploded into a full out bolt right towards the mean trainer on the fancy paint mule.

I’m screaming at DiAnna to “STAY ON, STAY ON, DON’T YOU BAIL OFF, RIDE HIM DEE, WHOA, STAY ON!!!” DiAnna is yelling at him to “WHOA, WHOA, WHOA!!!” Finally she gets him stopped about 50 feet before running into the meanie, and I sigh a big sigh of relief and so does she. The meanie trainer yells at her to stop yelling because it’s upsetting his mule, who is just standing there calmly. After all, this is a MULE show, so you need to expect for things to go wrong.

I go up to her, and tell her you did exactly what you needed to do, and because you yelled “WHOA” you prevented him from crashing into that mess. “You rode that mule and stayed on, when most people would have been scared out of their minds and bailed off. I’m so proud of you!!” To see DiAnna come so far in these years of knowing her, in her riding abilities is very impressive. She was shaken up by the whole ordeal, so I got on Gus and chased that lady down and begged her to let me ride him around the little devil spawn of a donkey while Gus lost his mind. Now mind you, the donkey never once did anything wrong, and just stood there like a statue — it just was Gus, being a prey animal, acting like a mule.

Everyone calmed down. DiAnnna got back on and showed liked a pro. Gus did great on his trail course, much better than Red, and she got her mojo back. It was a long day and a hot one. After waiting to ride for hours and finally getting to go, after her class she decided to get off to stretch her legs, and walk back to the trailer. So, I climbed on Gus to ride him back since I had been standing all day

Going through the gates on the track back to the trailer, there was ANOTHER little devil incarnate, tied to the trailer. This little donkey was much more wild than the calm one earlier that scared Gus. He was throwing a ruckus of a fit and hollering these guttural groans that sounded like it came up from hell, itself. This blew Gus’s mind once again, and he bolted straight ahead almost plowing down a little red mule and his owner.

All I could do was laugh and apologize profusely: “Sorry, little red mule, this mule doesn’t understand that this little donkey scaring him is not actually the devil and actually hypothetically could have been his dad.” Maybe Gus has some deep-seated daddy issues?

All’s well that ends well. We all made it out of there alive, and I think we all can say “Well, that was fun!” 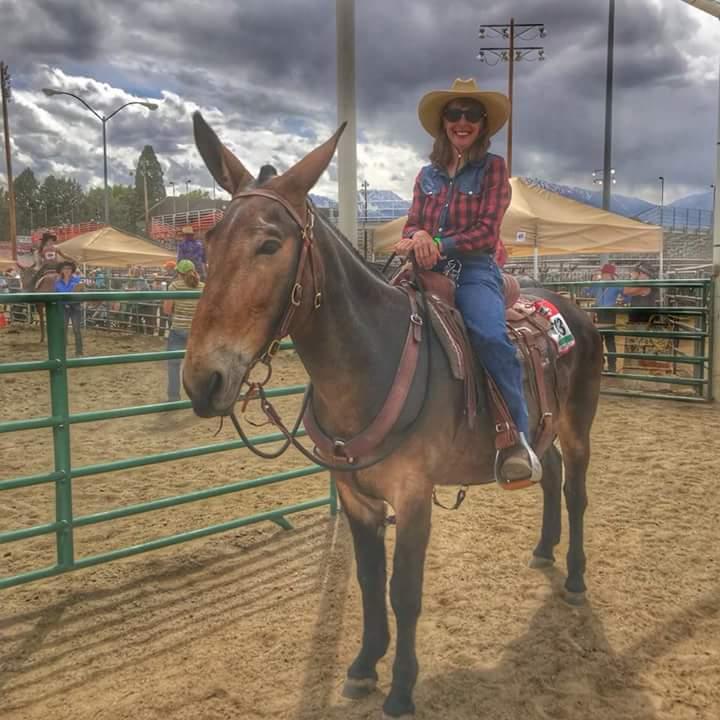