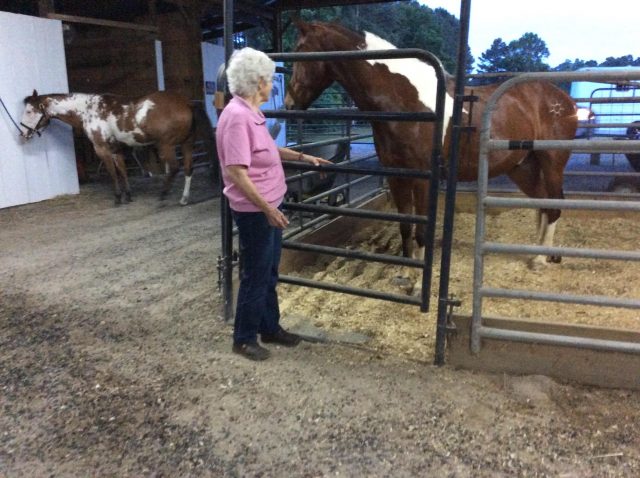 A road trip gave both Kaliwohi and Esther the opportunity to mark their progress as a team and as individuals — a long trailer ride for Kaliwohi, and a long drive for Esther to test her snacking resolve!

Last week I had the opportunity to take Kaliwohi on a little road trip. As you may recall from prior installments in this column (our clinic with JJ Tate and our field trip to River Glen), Kiwi’s been off the farm a time or two to local spots, but this was his first trailer ride of the longer variety.

Our destination was about two hours from home and Kaliwohi was going to have the opportunity to be around some very talented dressage horses. (One of my most-fun-things-to-do is choreograph/compose dressage freestyles, and I was heading to Georgia to do exactly that!)

Two weeks ago, when we were going to nearby River Glen, Kaliwohi hopped right on the trailer without a moment’s hesitation. When I asked him to load for this Georgia trip, however, for whatever reason, he decided to ask his favorite question in his own mustang-y way: “Why?”

“Why, mom? Why must I get in this enclosed box when all I want to do is go back to my herdmates and my nice shady barn with the cool fans, where everything is familiar to me? Why? Why? Why?”

He snorted. He shook his head. He backed up. He pawed. Over and over Kaliwohi communicated in every passive way he could, “I do NOT want to do this, mum!” And I just kept responding, through my voice and my actions, “that’s okay, just load up anyways; no big deal.”

Kiwi is now five, and, based upon my experience with young horses, I believe horses go through “adolescence” just like humans do. Some horses go through this stubborn/testing phase when they are three or four; others (can we say “warmbloods”? lol) often wait til they’re six or seven to start pushing the boundaries and asking, “why?”

Growing up, I distinctly recall my own mother’s response when I was a teenager and starting to push back on certain things. My “whys” were met with a sharp, terse, “because I said so!” I was never a rebellious child, so that answer always hushed me up and made me feel bad for even asking the question.

Kaliwohi is not rebellious — he never reared or tried to strike me at all — but my oh my can he be stubborn! For over an hour, he asked “why.” And, for as long as it took, I answered him quietly, “because I said so.”

First, I made light of it and laughed and told him, repeatedly, out loud, “Listen, kiddo, this is not a democracy; you don’t get a vote! You don’t have to like whatever I ask you to do, but you do have to obey.” Physically, I held him so he was facing the entrance to the trailer and encouraged him to go forward.

After the first fifteen minutes or so, I began working him in a tight circle near the entrance to the trailer, so that he came to understand his resting spot was that open doorway.

When it comes to teaching a horse to load (or do anything, really), I’ve heard numerous natural horsemen and horsewomen say, “it takes as long as it takes.” I agree with that philosophy, and so I just kept working Kiwi and giving him only one option as the right answer: step on the trailer and stay.

And, sure enough, after about an hour of fussing and asking, “why” he grumpily said, “okaaaay, mum,” and onto the trailer he went and stood still. He hauled quietly and all went well.

While at this farm, Kaliwohi’s “stall” was actually four stock panels put together. The makeshift stall was right in the middle of a small indoor arena, so he got a 360 view – and exposure – to everything going on around him. This included a flock of about twenty guinea hens. From Kiwi’s perspective, these birds were squawking, flapping, flying, cra-cra bombardiers-of-poop. 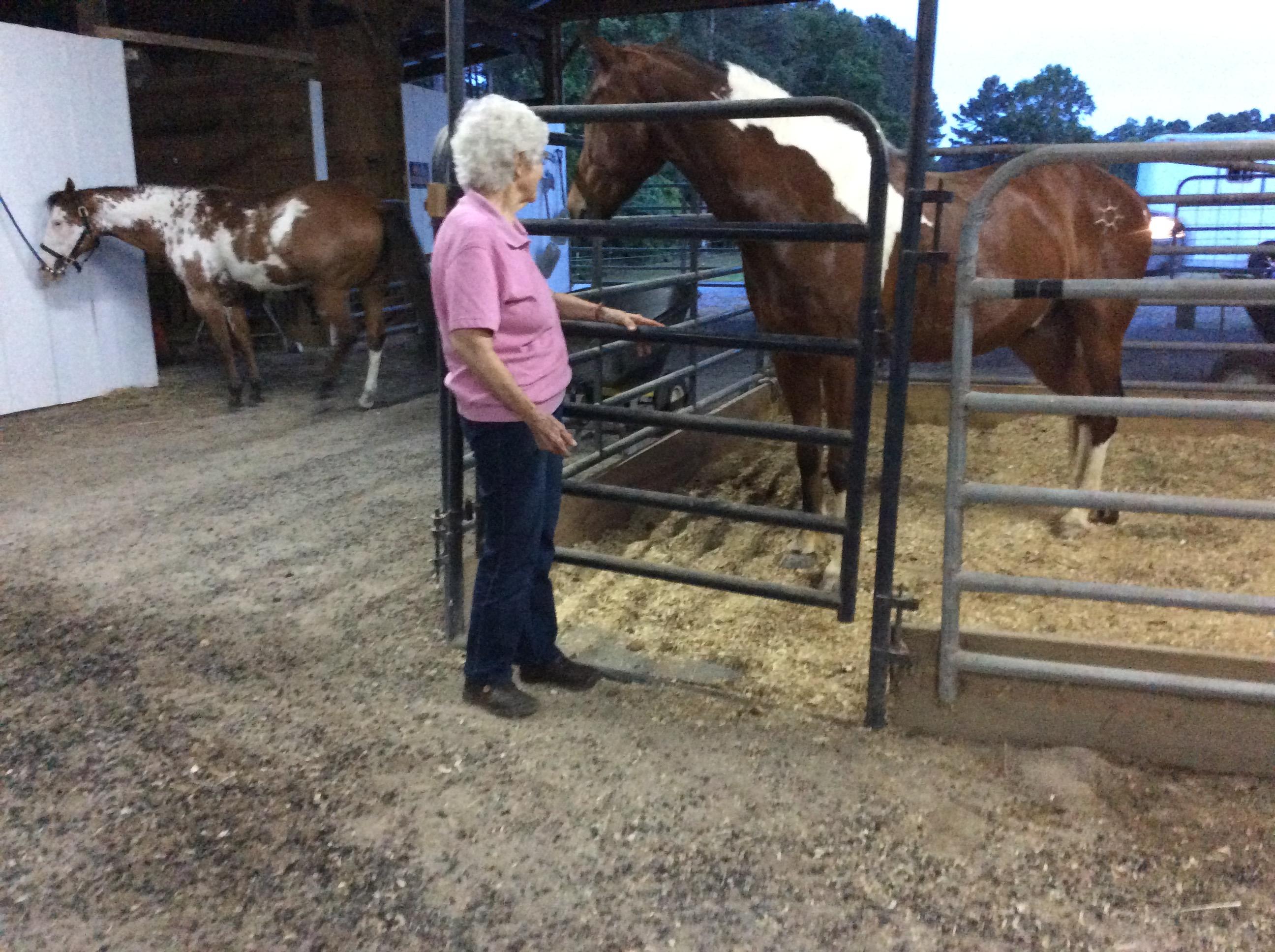 Kaliwohi and one of his admirers coming to give him a pat! Photo by Esther Roberts

Once each day, he also got about 20 minutes of turnout, for which we both were grateful. I hardly ever stall Kaliwohi, so he was more than ready to stretch his legs whenever the opportunity arose. He even got a tad of payback on the guineas, as he “herded” a few of them out of the paddock during his turnout time! 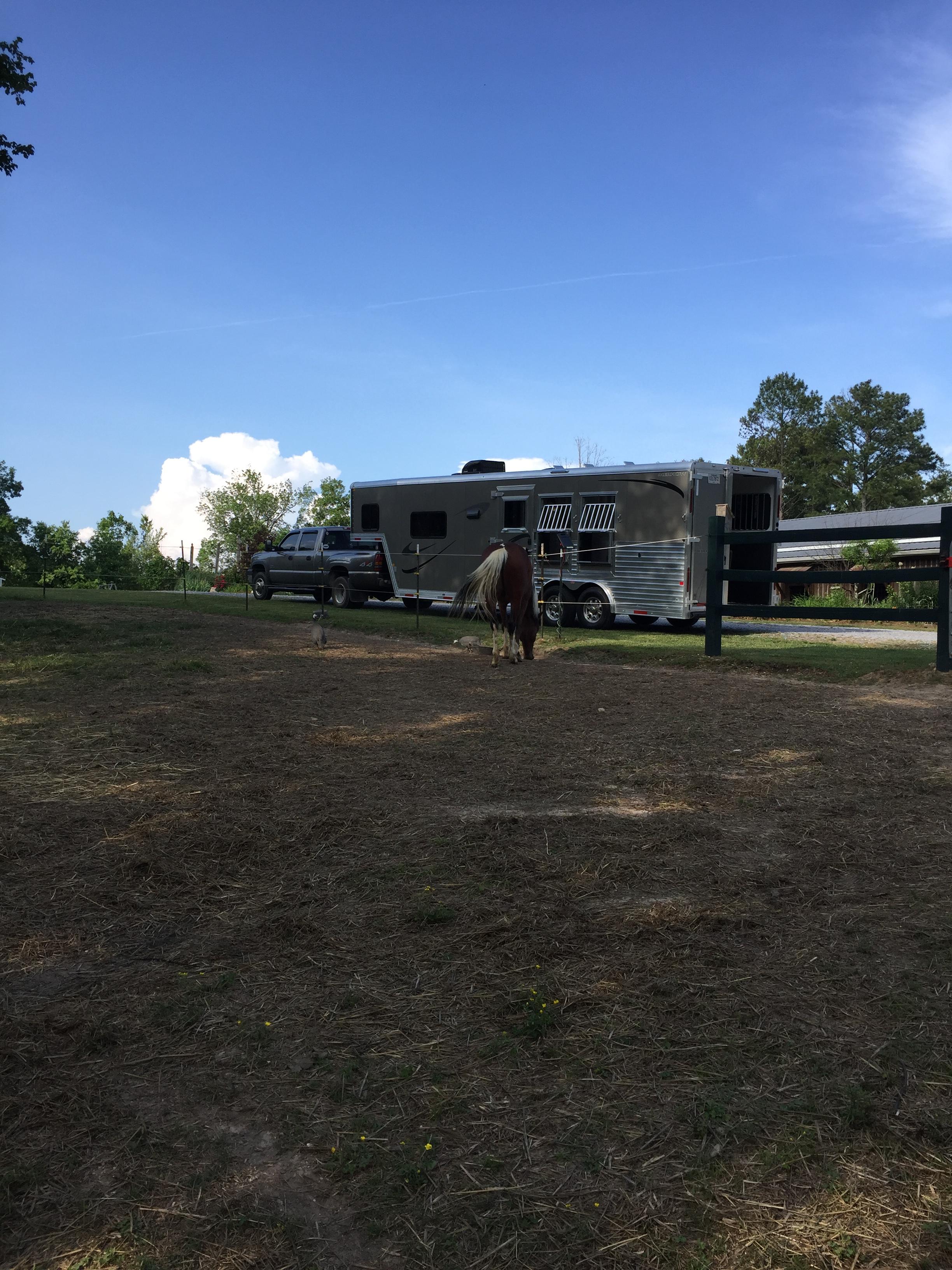 For me, this particular road trip was a time to test out my commitment to healthy eating, even while traveling. Old Esther would have popped open a box of Cap’n Crunch with Crunchberries and happily munched on dry cereal while rolling the miles. I could easily consume an entire box in a two-hour drive, sad to say.

New Esther strives to never snack while driving. Mindful eating begins with paying attention to one’s food, so I now choose to focus on eating as an activity in and of itself, instead of some add-on while I’m doing other things like driving or working or whatever.

When I want to snack while driving, I force myself to drink water instead of eat, and I stay motivated by imagining how I will look when I’m thin again. I keep a few hard candies, like peppermints, butterscotch, or cinnamon discs, in the console of my truck, so I can hold one in my mouth and add that flavor to the water as I drink.

Overall, this little trip achieved numerous goals for Kaliwohi and for me. Kiwi learned a great lesson about loading, he got more over-the-road trailering experience, and he had some great opportunities for exposure and desensitization to new things, like the guinea hens. I learned I can eat like a “normal” person, even when I’m in a new environment and feeling keyed up about producing a (hopefully) winning freestyle for someone.  #Progress