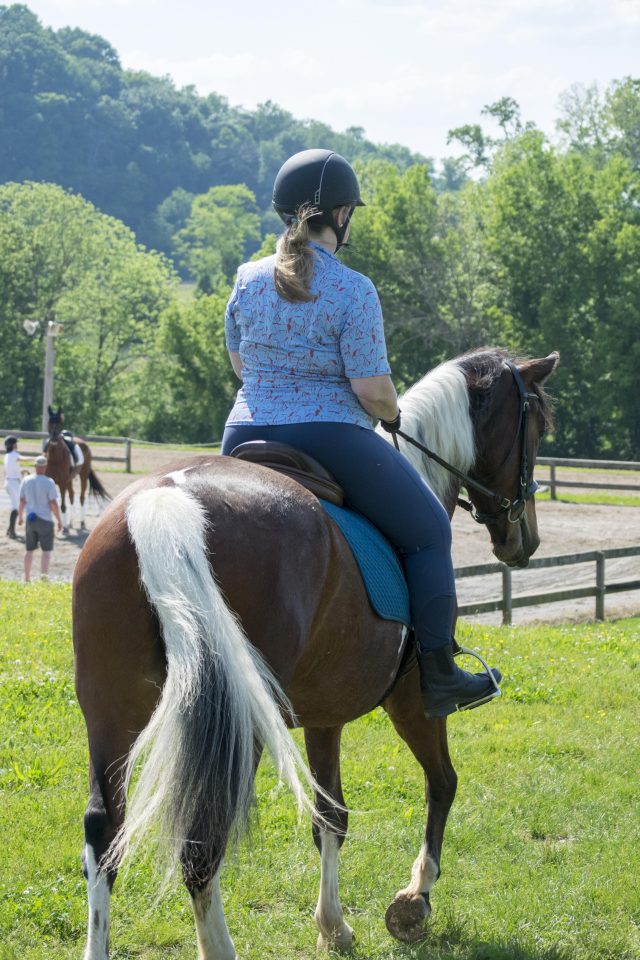 The study of dressage appeals to me because it requires clear communication and, when done correctly, builds a wonderful bond of trust between horse and rider. I was an adult before I’d ever even heard the word, “dressage.” All my youth was spent happily trail riding all over the Great Smoky Mountains. I was oblivious to such concepts as a deep seat, steady contact, and heels down.

This past week, I had the opportunity to take Kaliwohi to a lovely show facility, River Glen Equestrian Park. There, we enjoyed Kaliwohi’s first hack and a dressage schooling session, all in the wide open spaces of River Glen. 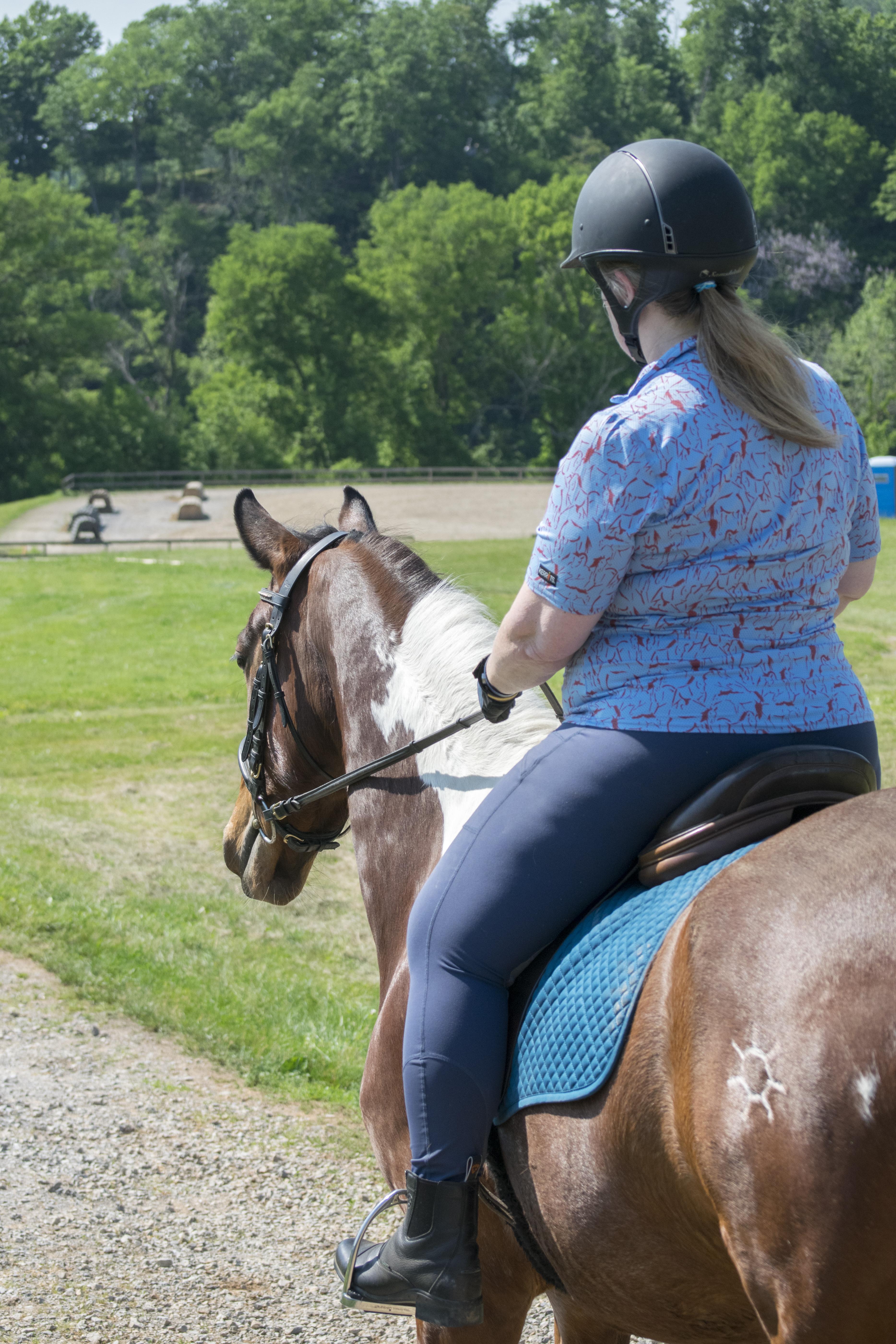 The owners of River Glen were hosting their annual rated show, “Dressage by the River” and I usually announce this show for them. So I hauled Kaliwohi with me and gave my green bean mustang the opportunity to hang out all day in a show stall and get used to the hubbub of a rated show.

Some galpals who were showing that day kindly offered to check on Kiwi from time to time. I gave him plenty of hay and water, told him to be brave and be good, and I headed off to the announcer’s booth. While it sorta felt like I was leaving my preschooler alone for the very first time, I knew my mustang needed to have the experience of just hanging out without mama right there all the time.

When I peeked in on Kaliwohi during my lunch break, I found him dozing in the back of his cool, breezy stall, just like he would do at home. I felt very fortunate Kiwi’s nearest equine neighbor for the day was a Grand Prix horse with years of showing under his girth. I am convinced Kaliwohi absorbed some of that show-savvy champion’s zen attitude.

After the show was over for the day, I tacked up Kaliwohi and we went exploring. Growing up as a western rider, I still think of relaxed linear riding as “trail riding” but I realize English riders call it hacking. So Kiwi and I went out for a hack. (We also schooled some, and I’ll share that story and photos next week!)

The show grounds that evening were abuzz with activity. Horses were everywhere – some being schooled, bathed, or hand-grazed. Kaliwohi, who always prefers to be with other horses, took note of the other horses, but he still paid attention to me instead of fussing to get to them. 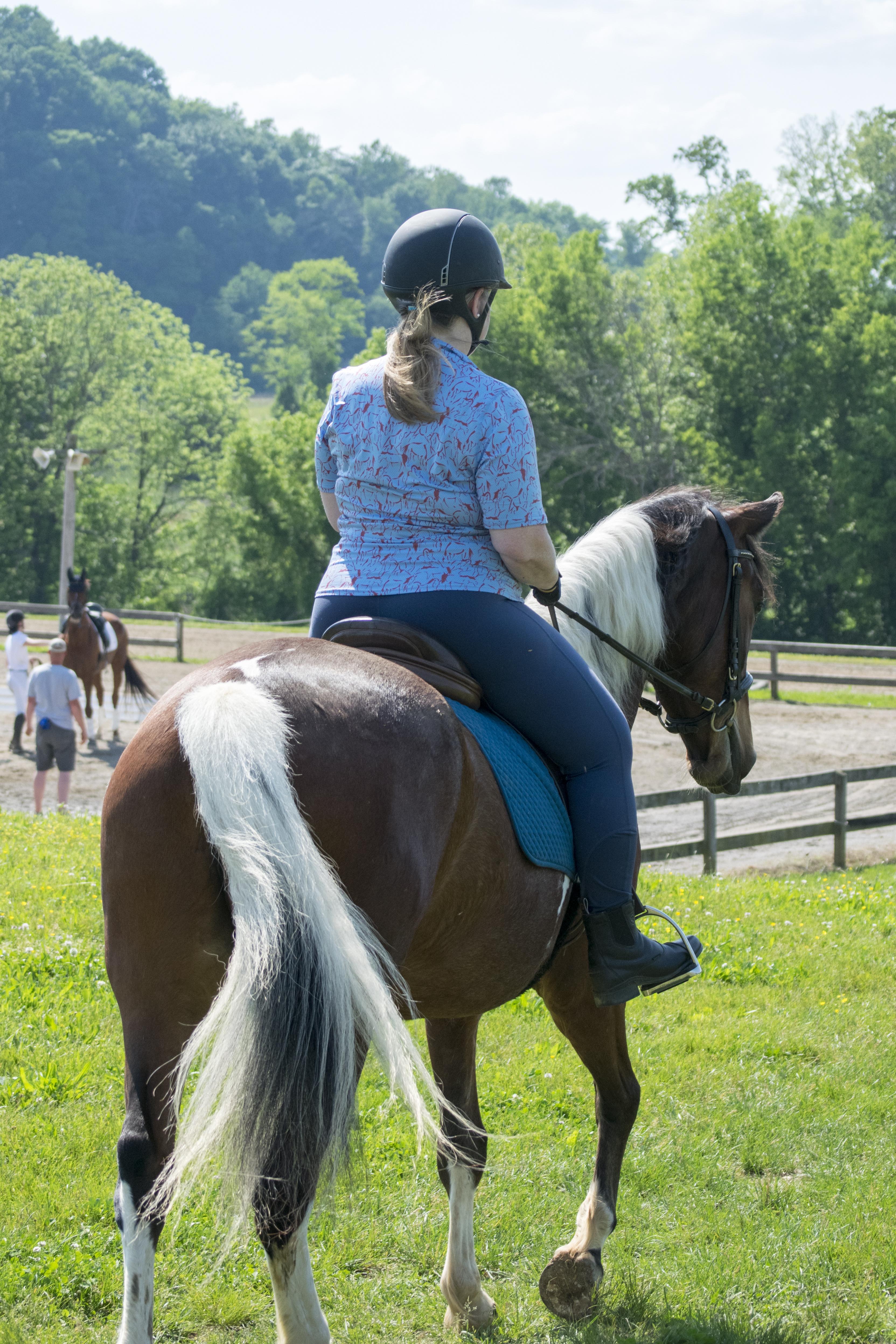 Seeing another horse being schooled at the same time – for the first time! Photo by Tess McHone, Everyday Beauty Photography

A local horse trailer retailer had parked a shiny new trailer in the vendor area of the showgrounds, complete with advertising banners strung up on both sides. It was a breezy day and those banners flapped like ginormous white buzzards waiting for their next horsey morsel. Kaliwohi saw them, but again, paid attention to me and did not shy or bolt.

River Glen is an awesome facility that can host all sorts of English and western shows. The cross-country course looks extremely challenging to this non-eventer’s eye, and I asked Kaliwohi to ride past several of the course jumps. He took it all in, but stayed tuned in to me and under control at all times.

I once heard an old-school cowboy say that the only way to get a bridle-wise horse was, “wet saddle blankets.” What he meant, of course, was one must put the time into training a young horse in a variety of environments to give that horse a proper education.

This past weekend, Kaliwohi showed me he can load in a trailer at 5 a.m., despite leaving his stablemates behind, and travel quietly all alone. He showed me he will stay relaxed in a strange stall in a barn he’s never seen before, despite being surrounded by new horses and all sorts of dogs and people and stimuli. He showed me I can trust him enough to take him out to the “wide, open spaces.” He was keen, but never out of control.

I was thrilled with Kaliwohi’s adaptability and willingness. The real “win” of our hack, however, was the enhanced level of trust I gained in my once-wild riding partner.

This was the first time Kiwi had been out and about on such a vast amount of land since he was captured by the BLM in Wyoming. With the wind in his mane and open country in front of him, my mustang could have been bratty and tried to “go alpha” on me. Instead, Kaliwohi proved to be a willing partner who tried his very best to stay focused and do everything I asked of him. 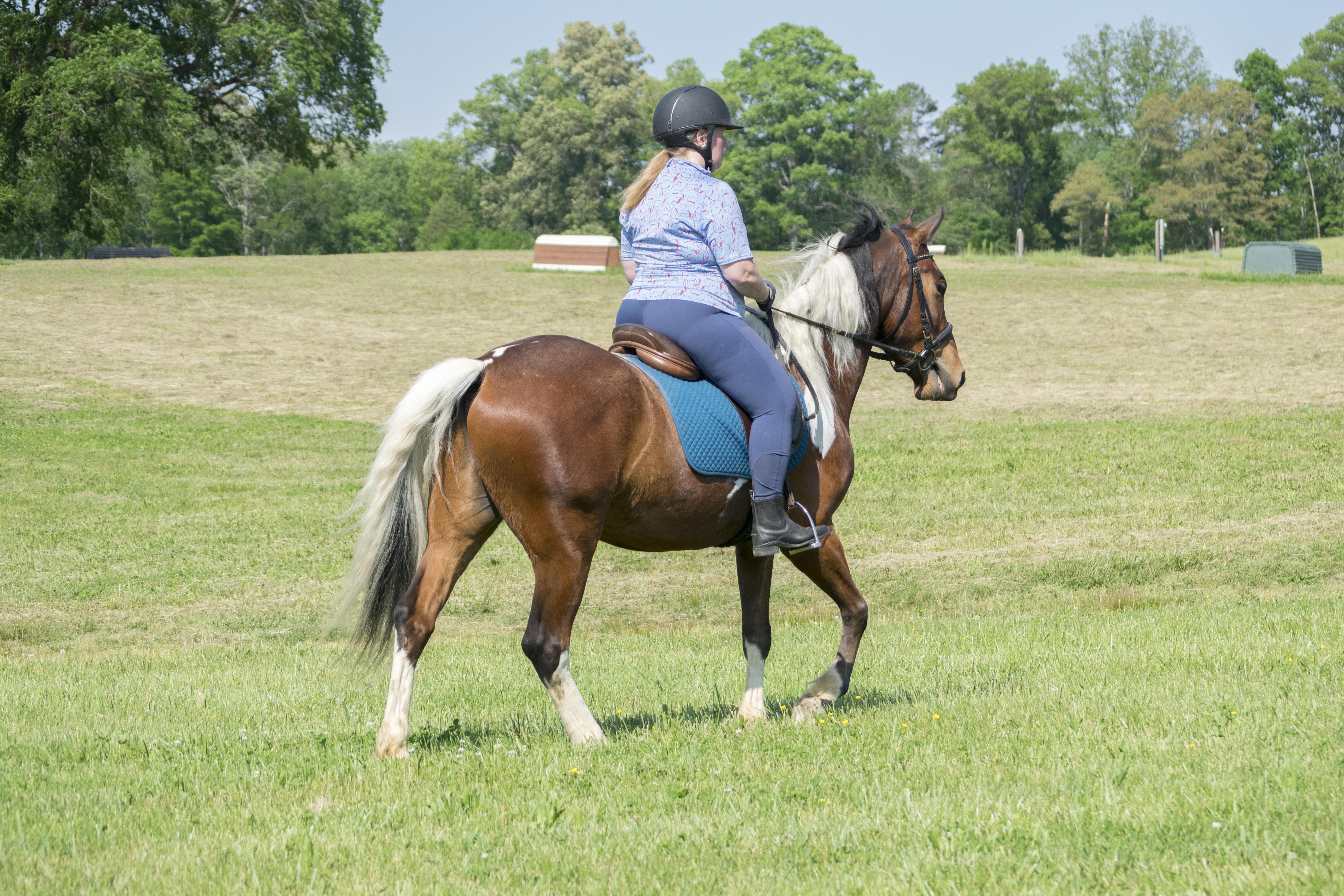 Meandering through the wide open spaces! Kaliwohi has not had this much visual stimulation since he was a free range mustang in Wyoming. Photo by Tess McHone, Everyday Beauty Photography

Such nobility of spirit is one of the myriad reasons why so many equestrians, myself included, consider horseback riding to be a precious privilege.