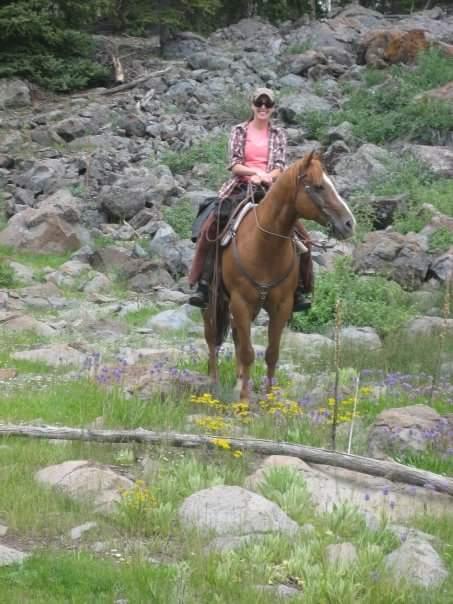 “Maybe next time you could sleep with your eyes closed?”

Dylan is a 26 year old quarter horse that I’ve owned since he was 9. Being 26, I know every day he’s still around is a blessing. Thankfully he’s still healthy and rideable.

Last week I walked out to feed lunch to the herd. Dylan normally greets me with a whinny, especially at feeding time. This day he was laying down in the upper corral. I thought he was sleeping, until I realized his eyes were open. So, I thought to myself, he must have died, but at least he lived a great life and passed peacefully.

I walk closer to him and he starts twitching. Oh no, he must have had a stroke. I call his name, I tap on him and no response. I pick up his legs, shake his head… nothing. His whole body is spasming, so I call my boyfriend to bring me my gun so I can humanely euthanize him.

The phone rings once… twice… and on the third ring Terry picks up.

At that exact moment Dylan jumps up and starts stretching.

“Yep,” I reply. “I was calling to tell you to bring me my gun because I thought Dylan had a stroke and was paralyzed. But never mind. He must have been in a REAL deep sleep, with his eyes open. Thanks, hon.”

(I always carry a gun with me when I ride in case God forbid my horse gets injured and I have to put him out of his suffering. Now, up until today I never knew if I could actually put my own horse down, but when I saw that he needed to be put down, I know I would have had no problem going through with it.)

“Well, Dylan, I’m glad you’re alive, and I’m glad I didn’t shoot you. Maybe next time, you could sleep with your eyes closed? Thanks. Now, go eat your lunch.”
Tweet