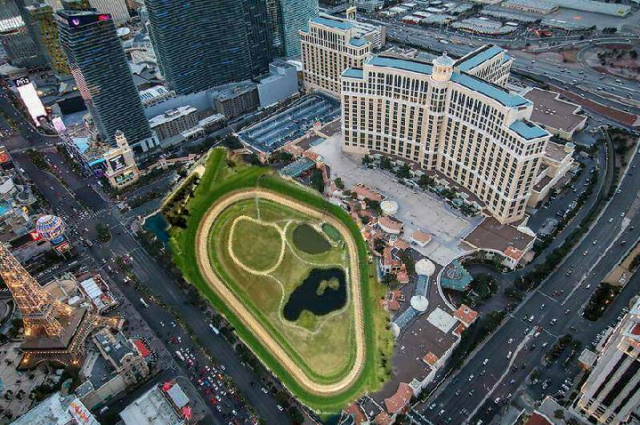 [APRIL FOOLS!] The state-of-the-art facility, with climate-controlled underground stabling, is slated to become the new host of the Preakness Stakes, whose future was in doubt due to deteriorating conditions at Pimlico. 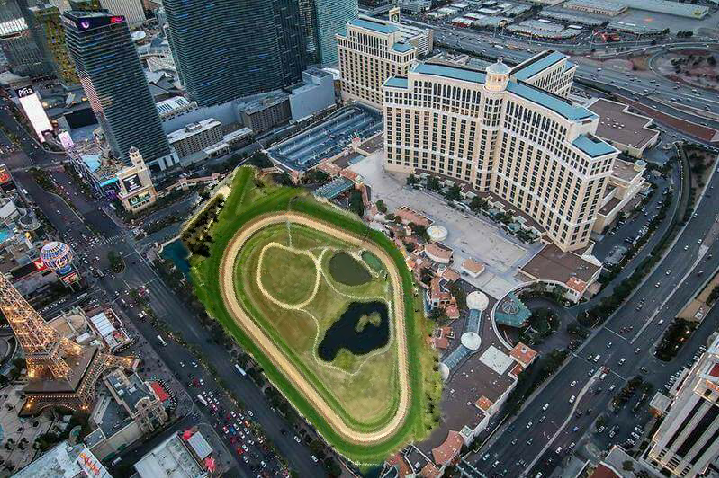 Photo courtesy of the Bellagio

With construction slated to being in the spring of 2019, the world-renowned Bellagio hotel and casino in Las Vegas, Nevada will break ground on an eight and a half acre thoroughbred track — on the spot where the famous lake and fountains used to call home.

With expenses of $3.5 million a year just to keep the famous fountains running, with 22 million gallons of water needed plus another 12 million gallons needed to refill the lake yearly due to evaporation, Bellagio leadership made a radical decision: “We felt it was our responsibility to keep water conservation at the forefront of the conversation,” stated Bellagio media relations director Sam Groupon. “As the Bellagio is already a leader in so many other fields, why not conservation and horse racing?”

The state of the art racetrack will be able to host up to 75,000 spectators with additional viewing available from the Bellagio hotel itself. Underground stabling will reduce horses’ exposure to the intense dry heat of Las Vegas as well as shelter them from the incredible noise and atmosphere of the strip.

In an exciting turn, the Bellagio Racecourse will also be the future home of the second leg of the Triple Crown, the Preakness Stakes. The Preakness is currently and historically run at Pimlico Race Track in Baltimore, Maryland, but Pimlico is showing its age badly — despite a long history of nearly a century and a half, time has not been kind to the track, and deteriorating infrastructure and outdated amenities are raising concerns. One journalist described the track as “devoid of charm or glamour.”

“What’s more glamorous than the Bellagio?” Groupon stated hypothetically. “We’re ready to bring the Preakness to a new level of luxury and decadence.”

To stay up to date on the Bellagio project, keep it locked on HN in the coming months. Our own Maria Wachter will be reporting from Las Vegas on the track’s progress.