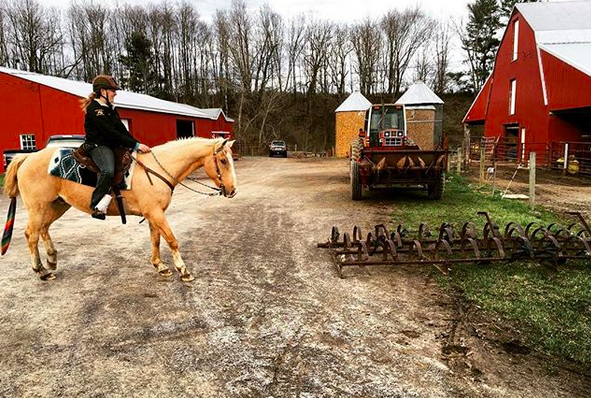 I got a text from my mother a few nights ago: “A friend’s very savvy trail horse spooked at a group of shirtless men jogging on the public trail today. Perhaps he startled at their paleness.”

And herein was launched the first-ever written-down collection of really random stuff my horses have spooked at in their lives. Add your own in the Facebook comments!

1. The world’s dumbest barn cat attempting to leap into the saddle via clawing her way up his leg/shoulder (Jobber)

3. A field harrow that had been parked in the same place all winter without incident, but had recently run over a black trash bag, giving it the appearance of having phalanges floating lightly on the breeze (Winston again)

Photo taken several minutes AFTER Winston had backed halfway down the road with my sister-in-law before gradually being coaxed to at least keep it in the driveway. Photo by Kristen Kovatch

4. A flashing road sign warning of uneven pavement ahead (Randy)

5. The same flashing road sign on the opposite side of the road on the way back, which he had to physically turn his head all the way over his shoulder to intentionally look at over his blinder, so that he could spook a second time (Randy again)

7. A cow circling the cabin, behind which he had just pushed said cow (Skip)

9. After getting over the goats, the door leading into the barn housing the goats (Red again)

10. A hot air balloon lurking over the valley, several miles away (Red) 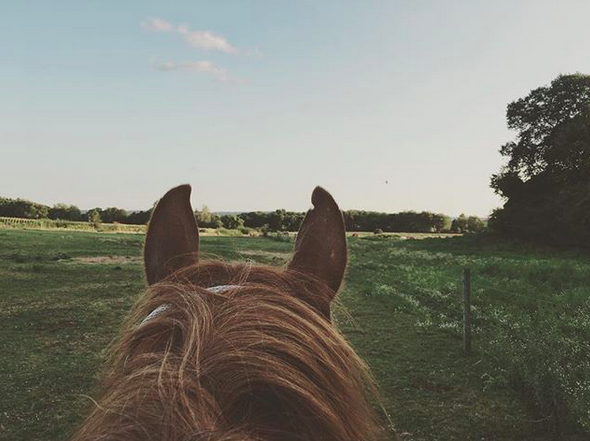 Yes, that wee tiny speck way off in the distance. Photo by Kristen Kovatch.

Add your own to the Facebook comments! And go riding.