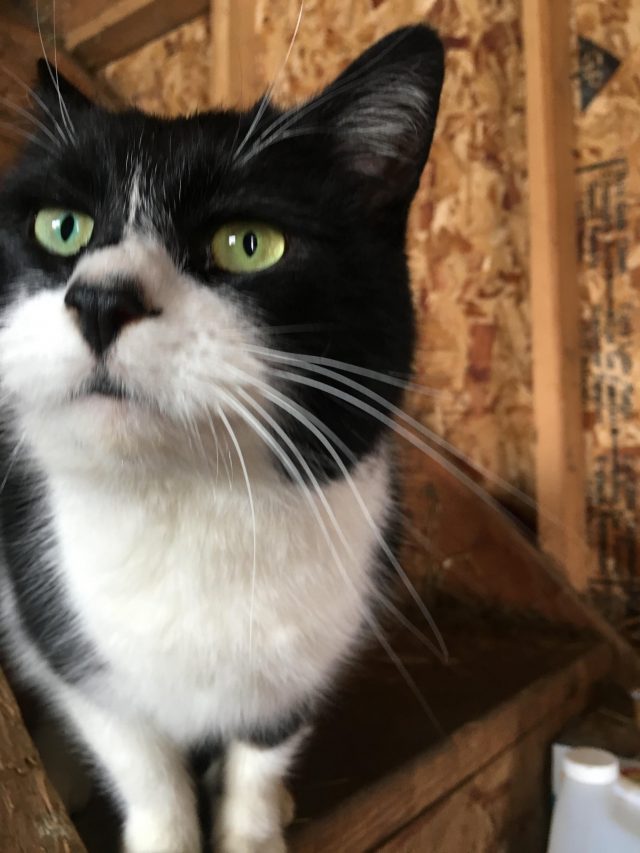 Why are you the way that you are? 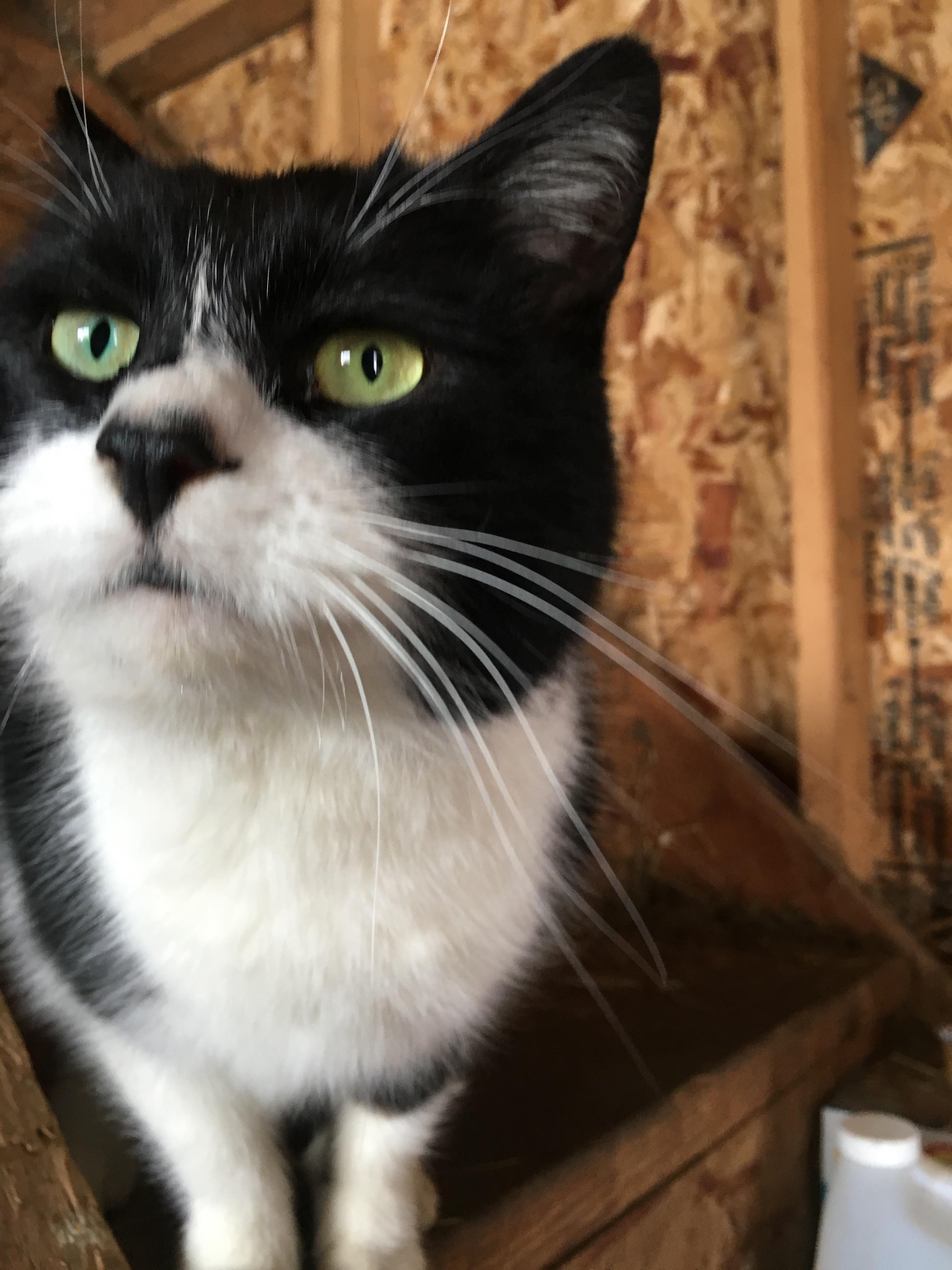 We named you the Border Cat — mostly for your black and white pattern, much like a border collie. That is where the resemblance stops, for a border collie is an intelligent creature, and you are not.

You started off shy, a feral case. That’s fine, we said, we need the shy, kind-of mean ones around the farm to catch mice, maybe threaten the pigeon population a little bit.

We observed each other, you and I, for many months: you lurked in the shadows of the cow barn, watching our comings and goings with narrowed green eyes that missed nothing. Every now and then we’d see you skulking at the end of the aisle, silhouetted against the light, sometimes with the ultimate trophy of a dead pigeon in your mouth, before you slunk off with your prize to disembowel it out of sight. We never tried to pet you and you never came to visit. This truce was fine.

And then in the winter of 2016 you crossed the driveway. We saw you like the barest shadow, a phantom lurking in the horse barn hayloft, watching us carefully as we bustled about the tack room setting grain. I convinced myself there was a ghost that cleaned the drippings off the oil supplement before I caught you in the act one day.

You were never quite the same after that. You stopped darting away into the cathedral of the loft; you starting lingering on the steps, mewing to us and making bread in the dust with your busy paws. It started innocently enough: we let you bump your head against the back of our hands, graze against our ankles as you purred. Soon enough you were jumping up onto the stall walls, chirping and purring away, begging to be picked up.

It became evident then that you’re kind of dumb.

“Dumb” might not be the right word — needy, perhaps? After all, you were smart enough to figure out how to jump in an open car window and eat Farmhand Bill’s lunch. This has trained you to climb in every open car door you can find, perhaps seeking again that font of ham sandwiches direct from the source. It’s only a matter of time before I accidentally take you home.

Border Cat, you are constantly underfoot. Despite our gentle reminders that you not try to rub against our ankles while we’re walking — especially not walking with horses — despite the move we’ve perfected of scooping you up by your belly on the toe of our boot and depositing you out of harm’s way, you insist on being right there with us, every step of the way. Despite the Thoroughbred sending you rolling across the floor, you persist.

And then came this past weekend, when the moment we all knew was coming finally came, when Rocky the draft horse stepped on you, you clueless idiot, as you snuck around us and planted yourself in the direct path of his dinner-platter hoof.

We all watched in horror for that split second that stretched for eons as you were pinned beneath that draft horse foot, writhing about in distress, until we could get Rocky to back up and set you free, sending you shrieking into the tool shed where we believed you had probably run off to die. We could not find you for some time. And then an hour or two later, there you were again, strutting your way back into the barn, tail aloft — perhaps down to eight lives now, but none the worse for wear.

The next day, you attempted to leap up off the ground and join me in the saddle astride the Thoroughbred. He didn’t really like it when you dug your claws into his shoulder on the way up. Death by draft horse was not enough for you, was it?

Here’s to you, Border Cat, and your next eight lives.