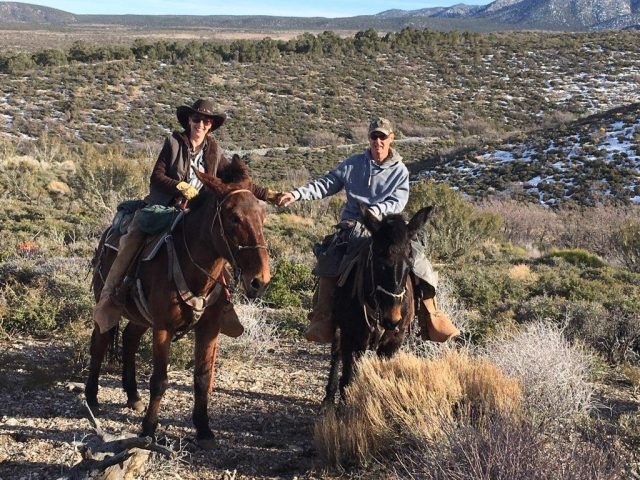 Who says country life is boring? 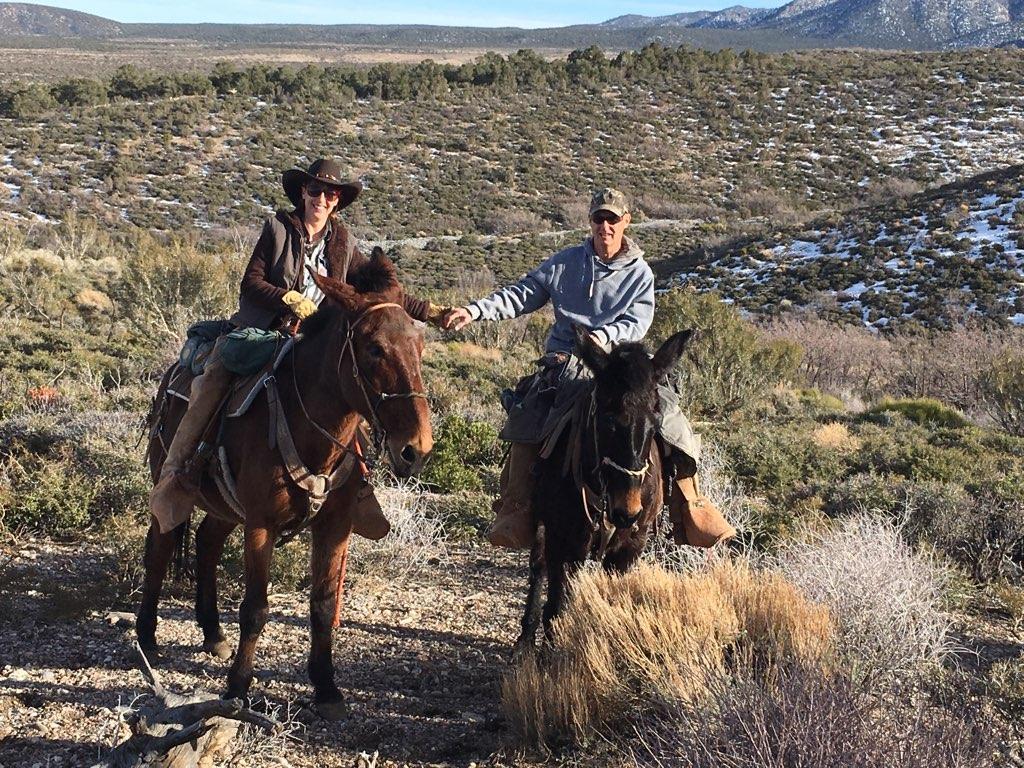 Maria on Elvis and Terry on Betty Boop. Photo by Lillian Peters

I work in Las Vegas, Nevada on the strip and wait tables at night. I live 57 miles from work on a little five acre ranch in the mountains, off the grid with my closest neighbor about a half a mile away. My property borders National Forest land, so even though I might not have many two-legged neighbors, I live in a place that is full of elk, deer and wild mustangs.

I have five equines: four mules and one horse. The mules are Smokey Joe, Worried Man, Betty Boop and Elvis. My horse is Dylan. I also have three FAT cats: Axl Rose, King Tut and Eleven (Eleven got his name, because on a scale of 1-10, he’s an eleven. I didn’t realize that it was a body fat score, just like how we score horses, because he weighs in at a whopping 26.4lbs).

I also share the ranch with my partner in crime, my boyfriend Terry.

Now that we’ve set the scene…

I’m driving home this past Tuesday night from work, and pull into the property. It was a late night at work and I got home around 2 am. I always circle the property to check on the animals and try to shoo the elk and wild mustangs off the property.

See, wild mustangs sound awesome. Who doesn’t want to experience the last bit of the dying west? Well, I guess everyone wants to experience it, and because of this, they have become a nuisance in this neighborhood. All two or three of the neighbors that I do have seem to think it’s their obligation to feed these horses, let them in their house, pet these horses, and act like they own these horses. Unfortunately that’s where it ends — they don’t want the full responsibility of horse ownership, so when they decide not to feed these horses, the animals, who have become accustomed to eating alfalfa, need to get their fix. They no longer want to eat the natural shrubbery of their wild diet and come onto our property looking for a hand out.

There’s no handouts here. If you’re going to be fed, you need a job. So, because we don’t feed them, they go at GREAT extremes to get any hay that they can get. They ransack our trucks — yes, we have lots of dents in our vehicles from mustangs fighting over that last bit of hay that was left in the truck bed. They also push in our corrals. We used to have an electric fence, but we’d wake up to a dozen or so horses in our corrals that must find pleasure in being electrocuted. Now we have corral panels and iron beams for fencing — Terry is a retired iron worker. This fence has kept them all out, except for one horse that the folks around here call “Knee-High.”

Knee-High is a mustang stud about 14.1 hands tall, all black with four white stockings. He’s a tyrant that has been spoiled since day one because he’s “soooo cute” and all the neighbors thought they “owned” him and decided to spoil him rotten. Knee-High is also a skilled jumper and has learned to jump in and out of our corrals: he walks right up to the corral and jumps in from a stand-still. When he sees us, he jumps out.

Terry spent all this of last weekend raising the height of the corrals so this entitled, super-smart hay thief can’t jump in. Well, Knee-High is determined and upon driving home this past Tuesday night, I have found he has pushed in the corral and broke the half-inch chain to the gate: Knee-High, his lady friend and her baby are all in our corrals. The gate is wide open, it’s 2 am and I’m still in my tuxedo from working that night. I do a quick head count on the non-mustangs and realize that Elvis has left the building.

I wake up my boyfriend, who is sound asleep.

“Terry, we need to get these bums out of the corral and go find Elvis!”

“Can’t this wait until morning? They won’t go anywhere.”

“No, honey, I paid way too much for our last mule to have him disappear and join up with the wild horses.”

So, we both get changed — me out of my tux and Terry out of his PJs — to go round up and round out horses. I walk outside with my mining light strapped to my head and am greeted by Axl Rose, the cat. He is very vocal and right between my feet while I head to the corrals. He just won’t shut up… wait, where are the other cats? I think to myself. They’re always right under my feet. I call to them and they don’t come. That is very unlike them. 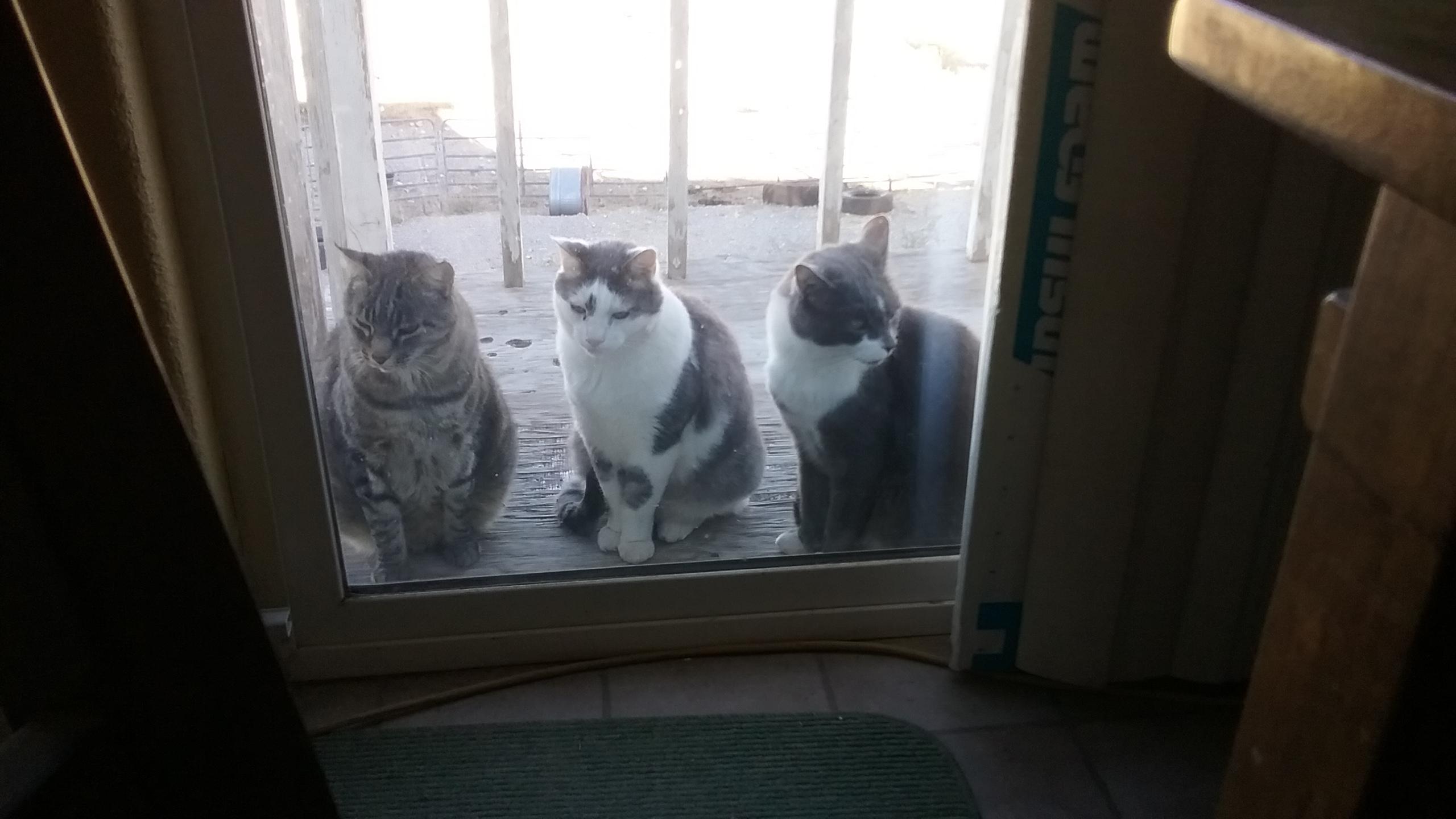 “Ok, Axl, did a coyote eat them or are they trapped somewhere?” I get distracted from the horse fiasco and start looking for cats. I search our well house, solar shed, connex box and still can’t find them… then it dawns on me. They’re trapped under the house.

Two nights prior, we had a wind storm and in the middle of the night the trap door to our crawl space under the house blew open, so Terry woke up and closed it and put a couple of big rocks on it to keep it from happening again. Yep, that’s where the cats were. King Tut pops out, and then out saunters out Eleven. For two nights they were trapped under the house — I wish I could say Eleven lost a couple of pounds while being stuck under there, but he popped out fatter than ever because he dined on mice for 48 hours straight.

All cats accounted for, off to the next task at 2:30 am: corral wide open, three wild horses mingling with four out of five of ours still in corral with a look on their face saying “you couldn’t get rid of us if you tried, we KNOW where the food is.” I start hollering for Elvis and spot him on the outside of the corral. He sees us and comes running back into the corral and up to us to try to convey that the outside world is a scary, scary place… and he hadn’t even left the ranch.

Terry and I herd the three wild horses out, fix the gate and head back to bed. All is well now on the ranch and we go back to sleep. Just a normal night for us. And people say country life is boring…
Tweet