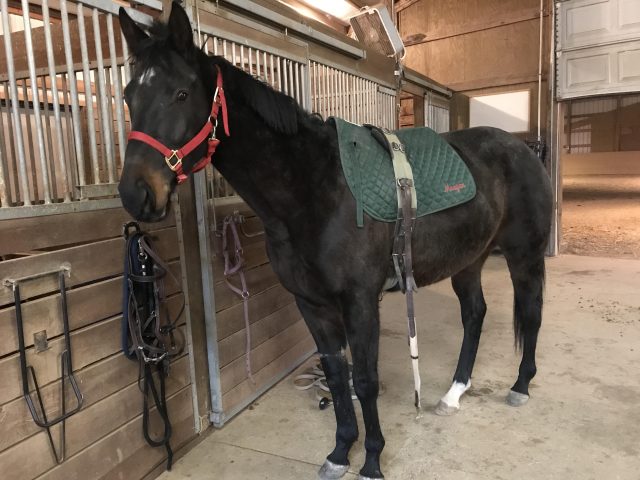 Meagan DeLisle’s Thoroughbred Makeover hopeful Flash has been presenting quite a few challenges in his first months home — but showing plenty of potential too! From injuries to wild moments to progress, Meagan gives us the scoop.

With only a handful of days left before Retired Racehorse Project Thoroughbred Makeover entries close, Flashback Justice has been settling in at his Missouri home and winning hearts along the way. The baby horse officially turned five on January 1 (although his calendar birthday is in April) and despite his young age, he continues to impress me… most days.

What Has Flash Been Up To?

Unfortunately for me, Flash appears to be a walking accident waiting to happen. Upon arrival, he was immediately beat up by his big brother Joey which forced us to relocate him to another field with a tubby pony named Sonny and his BFF FOR LIFE Philip, a yearling Arabian. Seriously, these two are annoyingly inseparable but I am just happy that he has a pal.

Then, he suffered an injury on his right front heel which required quite a bit of time off and lots of munchies in his very own stall (to Philip’s dismay). Shortly after healing up and being started back into work, my impressive little gelding managed to get a bell boot up above his knee in some magical feat, resulting in a laceration around his whole leg. Thankfully, it was caught early on and did no serious damage other than some wickedly large scabs and another few weeks off to let it sweat and heal. 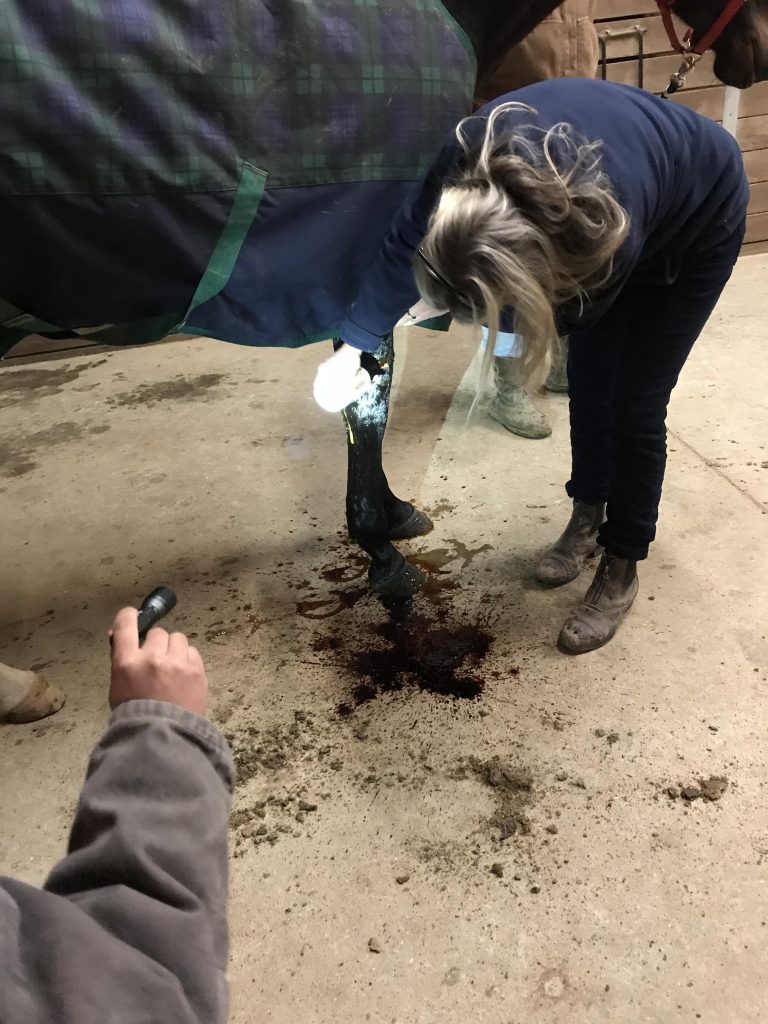 I am so thankful to have a barn owner with the knowledge and skills to doctor minor wounds at home- you rock, Tricia! Photo by Meagan DeLisle

I took his resting time as an opportunity to bond with him and get to know the quirky little fella better. Normally chill, it became apparent that Flash is an “out in the pasture” type of guy and wasn’t too keen on stall rest. One day during a lesson on Joey, my coach Cassie brought Flash out in hand to just let him walk around the arena with her. Every few steps Flash would leap straight up in the air off of all fours and show off his best dragon impression… definitely making for an interesting lesson for Joey and me.

Earlier in December we had a particularly warm day full of sunshine and happy thoughts. In my mind, there was no better way to spend the afternoon than by giving both of my boys a bath and allowing them some time to hand graze on the hill. As I walked both of them out to the field, however (I know, I know probably not a good idea), Flash was suddenly inspired by the beautiful weather to show mom and big brother Joe that he wanted to try out for the role of the Black Stallion… 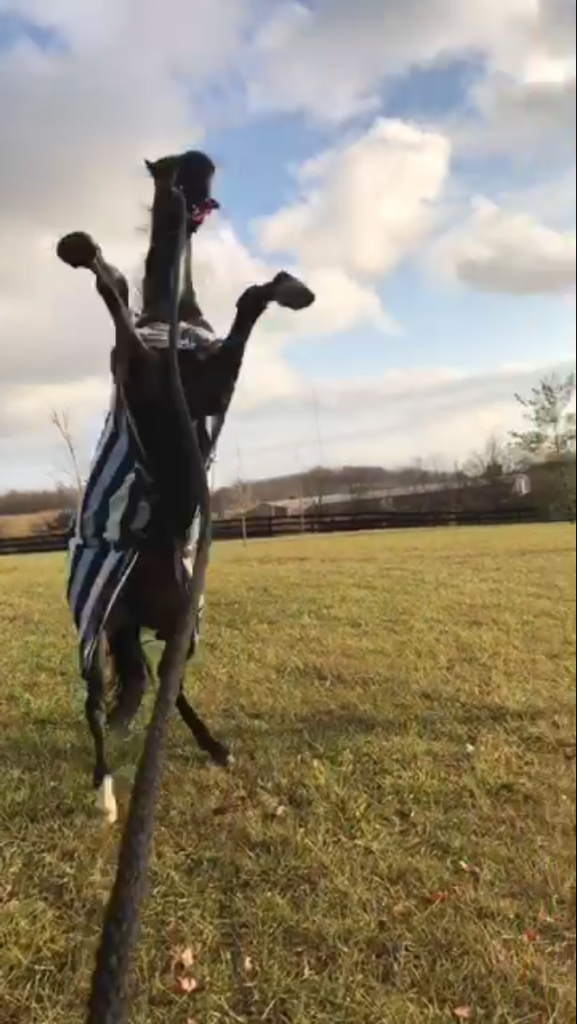 Now that his leg is healing well, he has been back into work in the surcingle thanks to the below 20-degree weather in Misssouri that is preventing us from riding. I am very pleased with his ability to track up and stretch himself out. He came off the track not knowing how to lunge on a lunge line, so I had to start from the beginning and teach him to accept and respect the length of the line and the lunge whip. Now we can lunge without the whip and he goes about happily and carelessly, with only the occasional woo-hoo moment.

I have noticed that when he does spook, it is on the side where his eye has a healing scar. As I said in our first journal entry, Flash came off the track with a recovering injury where a rock was flung up and hit his eye during a race. He was cleared by a vet and seems to have very little visual limitations, but the scar is still in its opaque stage and I am sure gives him some trouble visually. I have noticed a reduction in scar tissue since his arrival, however, and have high hopes that it will continue to heal up naturally and grow more translucent. 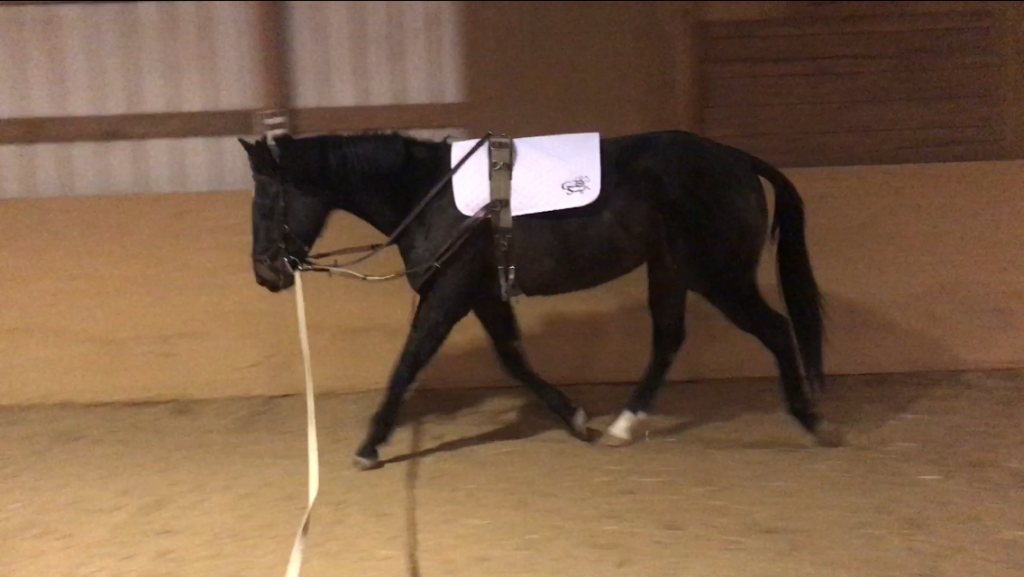 Who is Flashback Justice?

Since the weather has placed a major dampener on our training process, I have spent a lot of time just getting to know him better on the ground. I decided to do a little research into who he was before he came to me and suddenly it all seemed to make sense. I knew from the moment I met Flash that there was no way could have been a racehorse. For the most part his personality was more whoa whoa whoa than go go go. So I pulled up his race history on Equibase and then laughed for a good ten minutes straight.

Flashback Justice raced a whopping 16 times and only managed to take second once and third twice; the rest of his races he was in the back of the pack. He had a lifetime earning of… drumroll please… $8,753. He spent his life racing mostly in claiming races and was passed around the track quite a bit. His final connections decided to allow Flash an opportunity at another career, rather than continue to invest money into a horse who wasn’t necessarily a performer on the track. 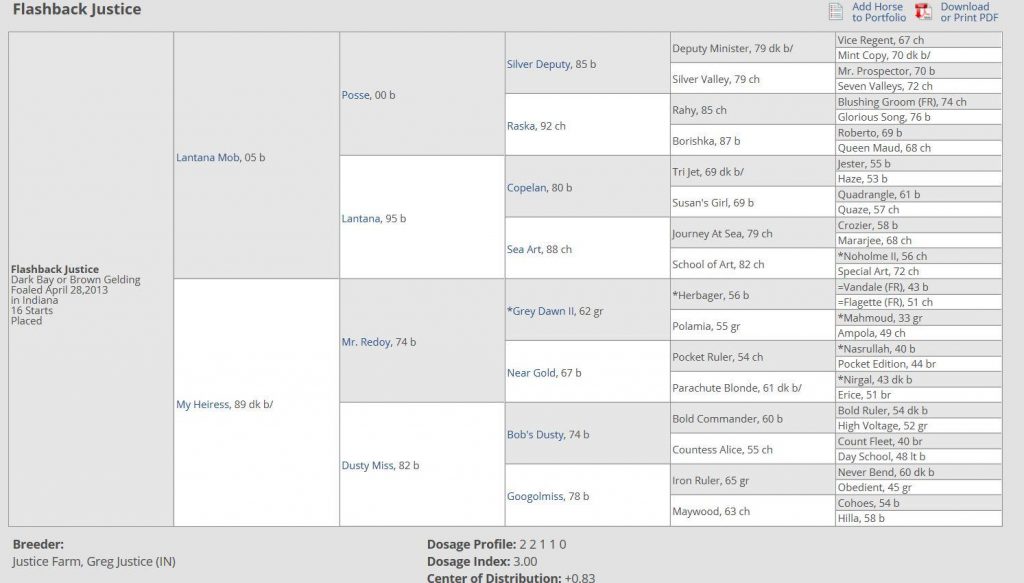 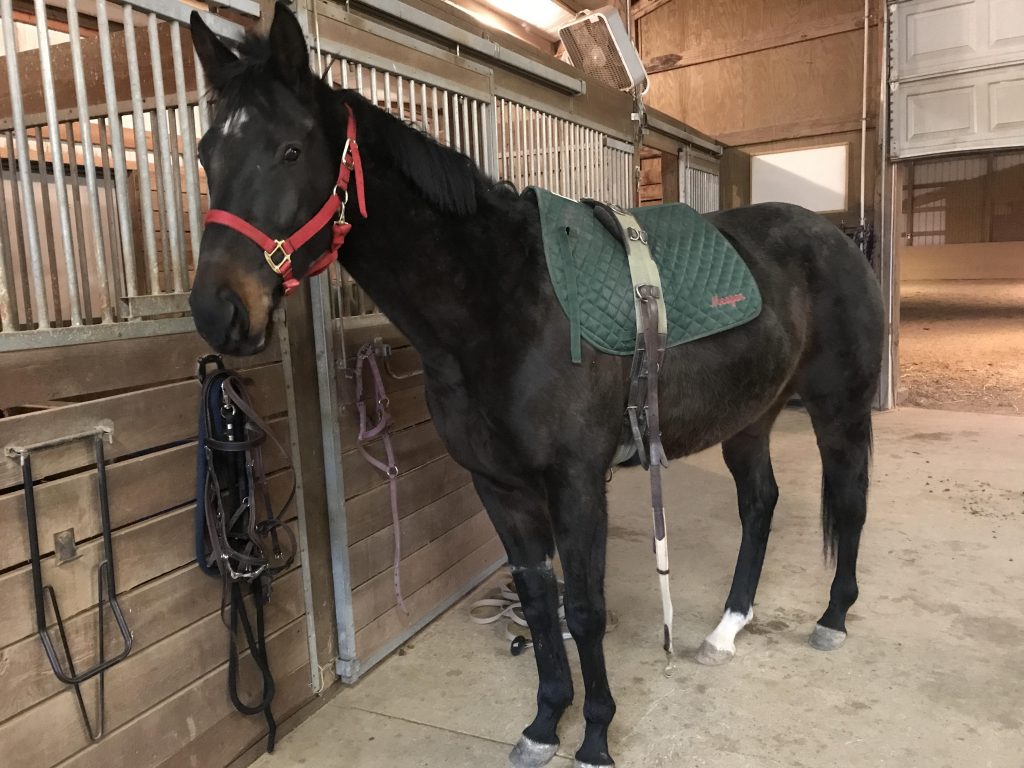 You may not have been the fastest racehorse, Flash, but I think you’re the cutest! Photo by Meagan DeLisle

But alas, this Justice Farms-bred baby wasn’t meant to be a racehorse and he wound up with me, ready to try something new. We are having a freak heat wave this week in Missouri with highs between 40-60 degrees, but never fear. Southeast Missouri’s bipolar weather disorder will be kicking back in full swing with a forecast of some hefty snow accumulation this weekend so who knows what will happen. I am going to make the best of the warmer temps and saddle up — it’s time for Flash to get some miles and prepare for the Makeover.