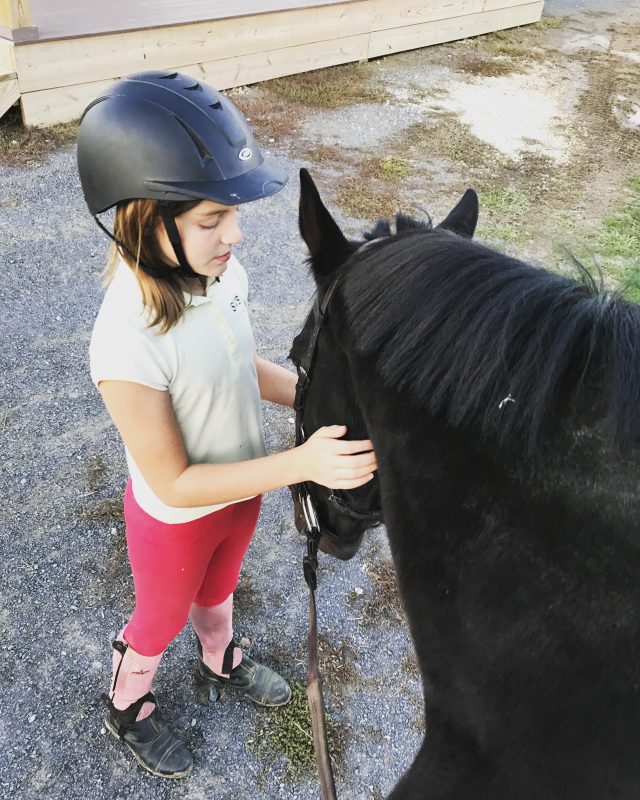 The RRP bug has bitten Meagan DeLisle! After reporting on the Retired Racehorse Project for the past year, she decided it was her turn to create a Thoroughbred Makeover of her own.

So I did what any normal equestrian would do: I rationalized that I could afford a second horse, convinced my husband of that truth, and then I began shopping.

My husband says I am a wee bit impatient, but I like to think of myself as someone who knows what they want when they see it and then makes it happen. Just two days after Wayne agreed to let me obtain a second mount in hopes of competing at the RRP I saw this cutie patootie. 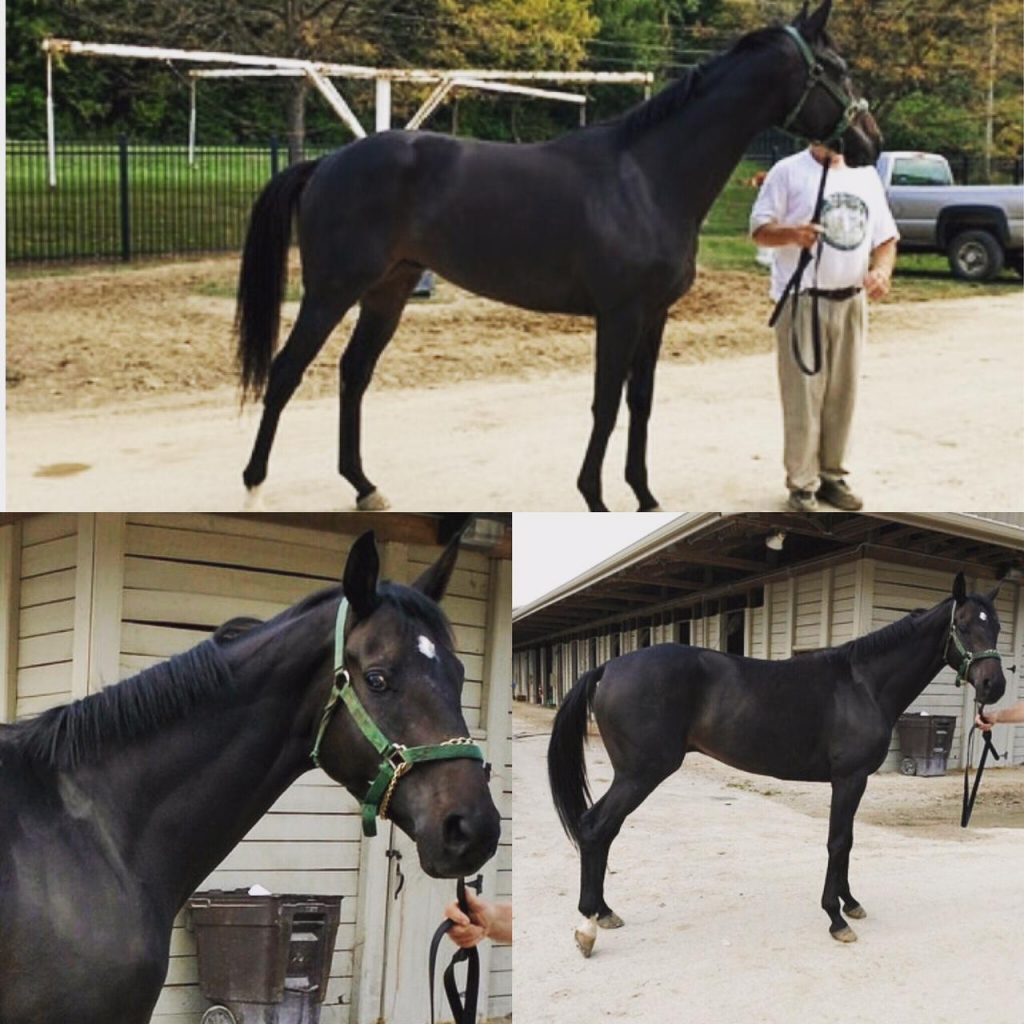 The photos of Flashback Justice that won me over. Photos by Amy Paulus

I always knew if I bought another OTTB it would be through Amy Paulus and Changing Saddles LLC. My trainer acquired Joey from Amy, prior to me purchasing him from her, and I was amazed by Amy’s dedication to each of her horses — even after they left her care. She followed along with mine and Joey’s journey and piped in now and then to share sentimental stories and a few suggestions along the way. Her influence on mine and Joey’s career definitely left its mark — I knew I would own two Paulus ponies one day.

Wayne has grown to appreciate Amy’s business model, but any time he glances over and sees me on her Facebook page he cringes. For months I have perused her sale ads and dreamed of bringing home one of the horses she markets, but finally MY TIME WAS NOW. I turned on my Facebook notifications so that my phone would chime any time she listed a new horse and I waited for the right horse to make his way into my life.

Sometimes you just know. I saw the ad for Flashback Justice and it hit me — this was the one. His price was well below my budget, he was built super cute and was quiet as a mouse in his videos, and to top it all off he was a darker, shorter version of Joey. I was smitten. I was the second one to comment on his ad and I immediately messaged Amy to see if he would be a good fit. Within a few hours the deed was done. “Flash” was mine and Wayne officially dubbed me a horse hoarder.

Flashback Justice is a four year old, 15.3 hand dark brown gelding with an adorable white star and the kindest eye. He did come off the track with set osselets on his ankles and a spot on his eye from a rock flying up and hitting him at the track. After Joey’s eyeball fiasco I felt like I could handle a wee bit of scar tissue (which typically fades over time; the injury was only a few months old with no visual limitations so I was not deterred). I also never overlook a horse with set osselets, as Joey also has them and schools up to 1.0m with ease. If given the proper amount of rehab time, the osselets set and many horses go on to have successful careers with zero limitations. I trusted the information Amy gave me and opted to go without a PPE. His purchase price was on the lower side and I just felt that he would be worth the gamble. 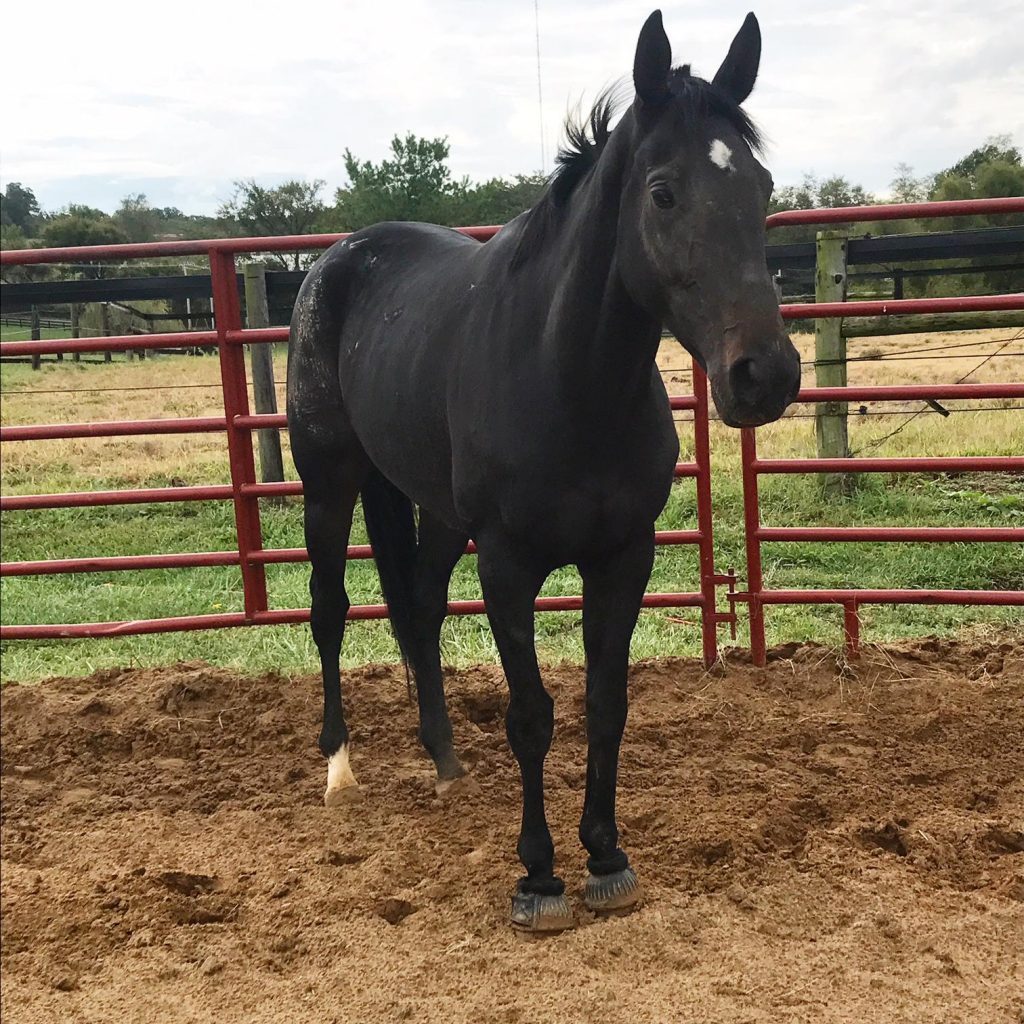 All in all, Flash had 16 starts on the track with no wins. In 2017 he managed to snag s third, but he only made $8,753 before being retired from racing. He was bred by Justice Farms out of Lexington, Kentucky which from my research is known for producing babies with good brains. I eagerly awaited his arrival and dreamt of the day I would officially have two horses in my possession.

That day came while I was out of state on a business trip. I was SO frustrated that I couldn’t be there for his midnight arrival but I knew our barn staff would give him the best care possible. All night long I tossed and turned and wished I was at home to welcome him to the family. Finally, at 8:00 the next morning my coach began sending me a series of Snapchat photos and videos to introduce me to my new addition. 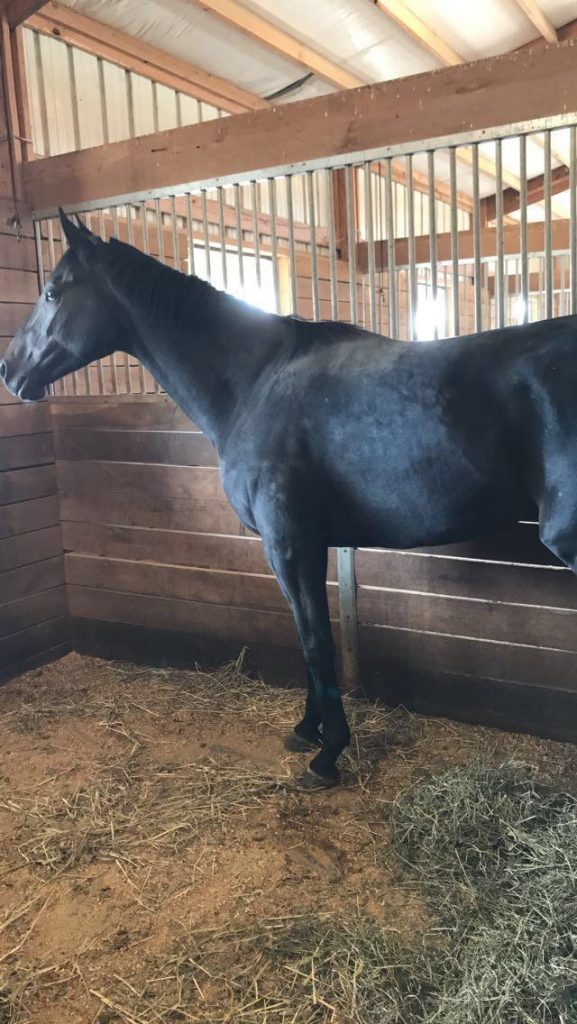 I died when I saw that coat full of dapples. Prepare yourself for an overwhelming amount of adorable Flash photos, people. Photo by Cassie Zimmerman

Despite spending the whole day prior in the trailer traveling all across the country, Flash was calm and happily munching away at his hay. Cassie reported that he was adorable, kind, and the cuddliest horse she had ever met. The barn was full of commotion that day as they prepared the indoor arena for a fundraiser for the local hospital and transformed it from a riding arena into a wild west dinner and dance hall, but Flash didn’t even bat an eye. Even though I hadn’t met him yet, I was in love.

And he didn’t disappoint when I finally met him. Flash was level headed and loving from day one. Wise beyond his mere four years, we spent our first day hand walking around the farm and navigating small cross country obstacles in hand. The décor from the barn party was still up and he was not fazed by the large stage, wind chimes and fluttering table cloths in the arena. He even happily walked through drapes that covered the barn aisle way that I couldn’t pin back. I was smitten. 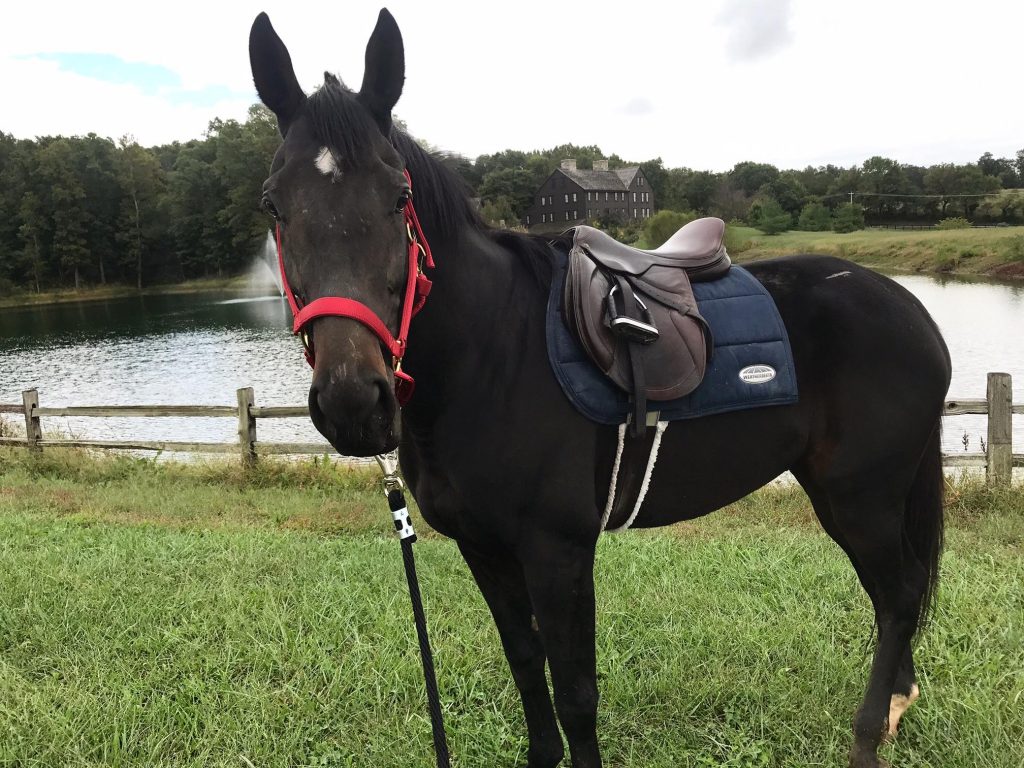 Out and about on a farm adventure. Photo by Meagan DeLisle

Unfortunately, Joey wasn’t too keen on being a big brother at first. Normally the bottom of the pack, Joey took the opportunity to establish his dominance when the new fella arrived at the farm. We separated Flash from the herd of four OTTB geldings that live together and he now enjoys the company of a particularly round pony named Son of a Blue (Sonny) and a yearling Arabian colt named Philip. As a concerned mother, however, I wasn’t going to let Joey get away with that behavior. I spend a lot of my free time working with both of the boys in hand or tied up by one another so they can get used to each other. I am working towards a goal of bringing both of my horses home in the spring, so they might as well get used to one another now! 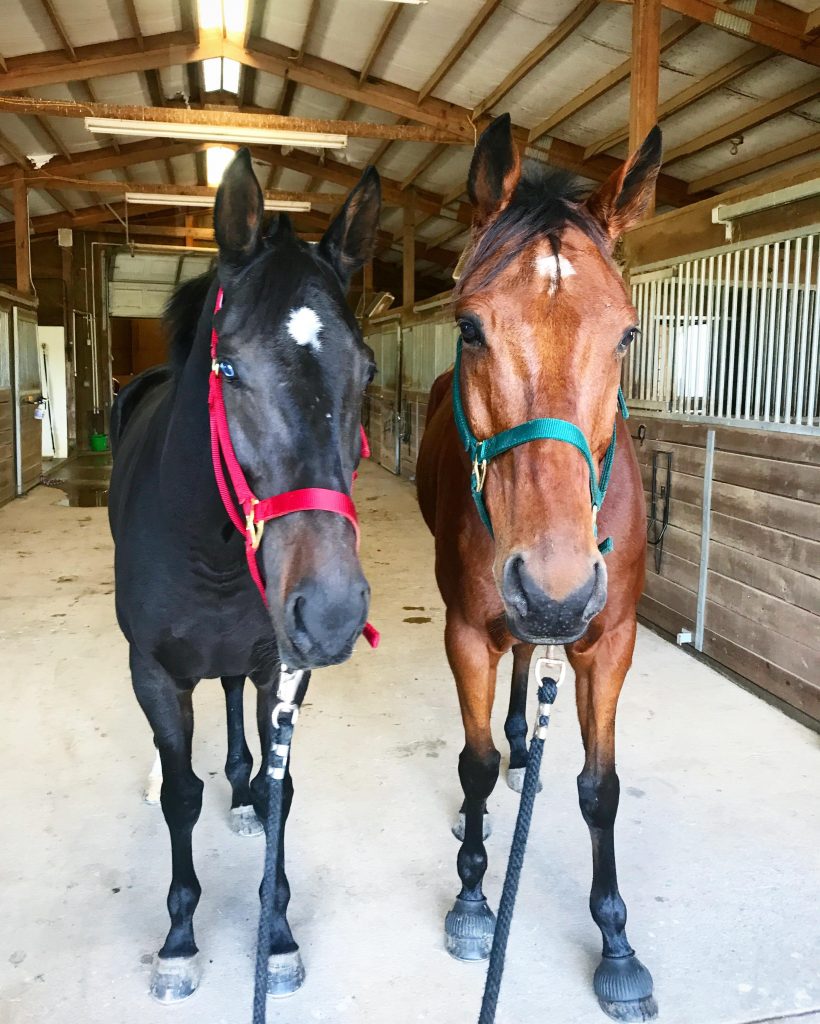 Be still my heart… Photo by Meagan DeLisle

Since his arrival, I have put a handful of rides on Flash just to get to know him. We haven’t really worked on anything serious and are keeping our rides under the 15 ride limit per the Makeover stipulations. His serious work will begin in December and we will spend the majority of the winter teaching him to balance in his flatwork. He is a fabulous mover and has a great brain. For fun I trotted him over his first crossrail to vertical combo one night and although his grace wasn’t that of a natural born jumper (he kind of ran through them but he never once spooked when the vertical gate collapsed beneath him!), he just plodded along like it was his natural born job. He has become quite a farm favorite for his lovable disposition and all of the kiddos bombard him with treats and kisses. 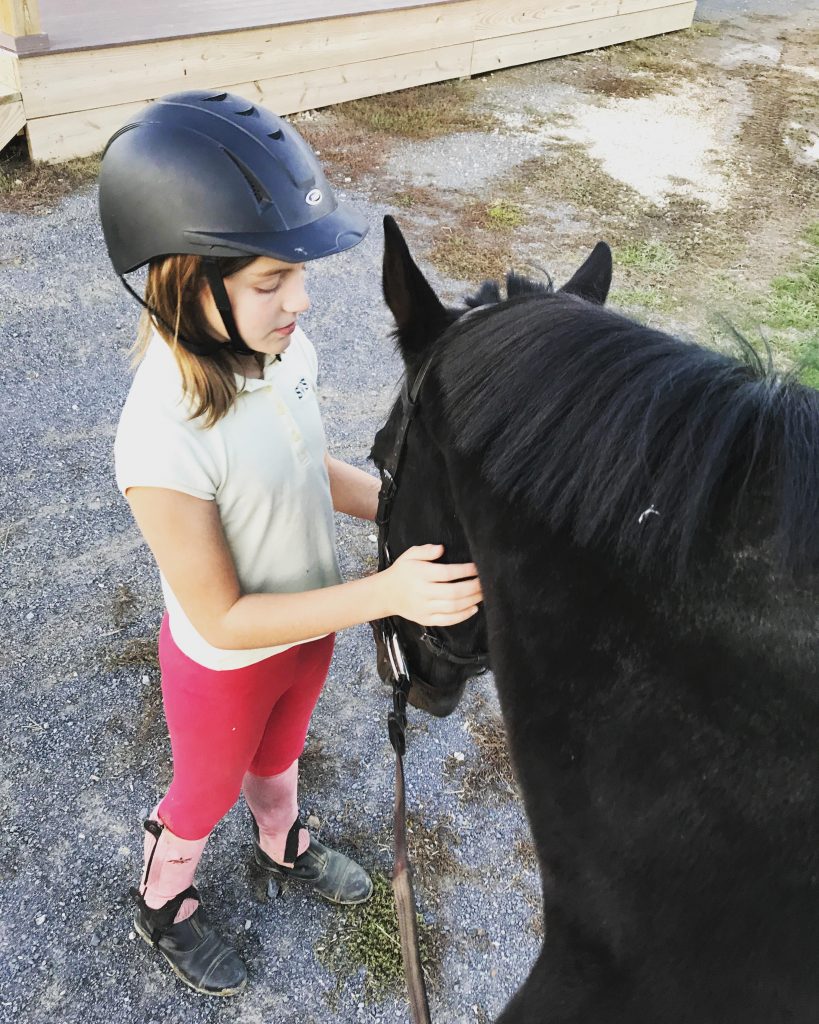 While all of the barn kids love Flash, Maddy here has really taken a liking to him. “Flashy likes kisses, don’t you Flashy?”
Photo by Meagan DeLisle

I am going to let him tell me which disciplines I will enter him in, but I am thinking along the lines of either hunters or jumpers paired with field hunters or trail. Flash has proven to be unflappable and easy to work with, so no matter what he decides to do I know he will be easy to teach. I am so thankful for Amy Paulus for helping bring this guy into my life and can’t wait to see what he grows into! 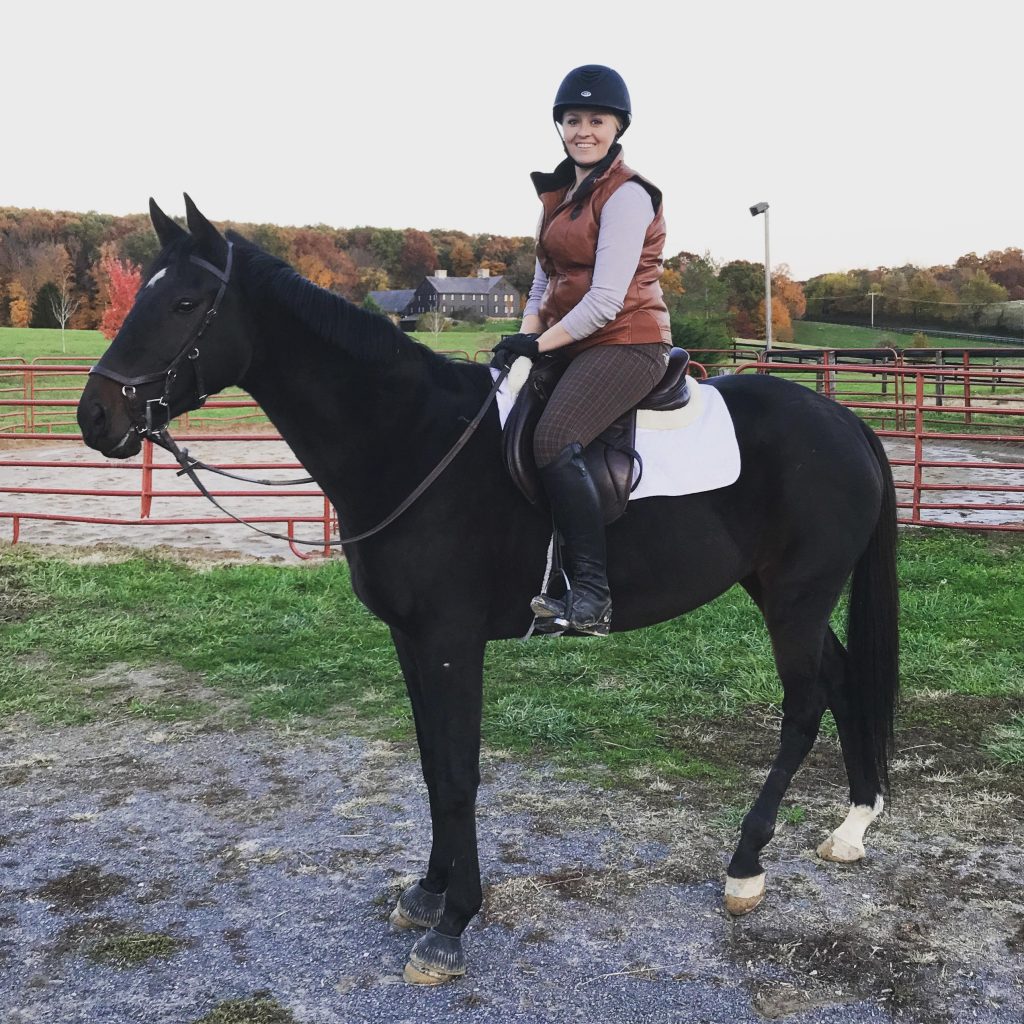 I’m only a LITTLE proud of my new boy….if you couldn’t tell.
Photo by Ella Moll