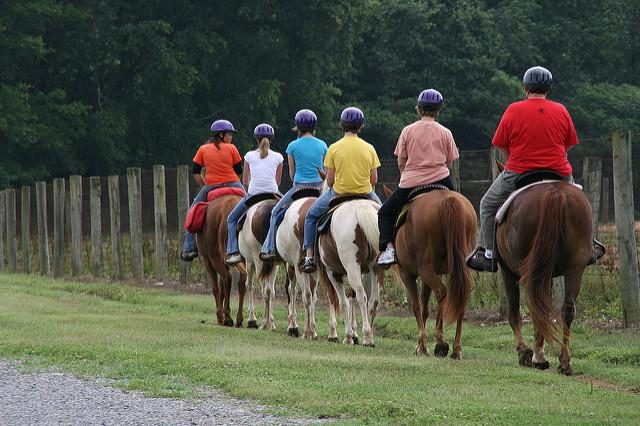 Hitting the trails is a great way to relax and enjoy your horse… and people watch. Maria Wachter has a tongue-in-cheek list. 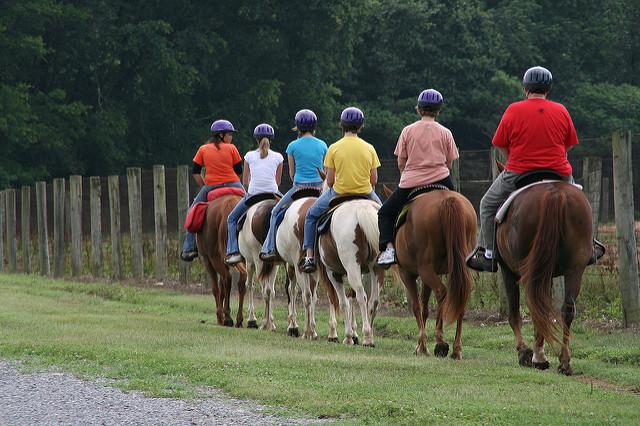 Read with a grain of salt. All is meant in good fun.

This person wants to take their horse for a long ride off a short cliff. Yes, the scarier the better. Why take the trail, when you can climb a boulder to get to the same area? There’s no point in riding for the yahoo if it doesn’t include at least one near-death experience per ride.

Yes, this person has been riding for over five years, in five different states, but still doesn’t know how to properly tack up a horse or tie a rope halter. Also, this person has never fallen off and doesn’t even have an idea how hard the ground actually feels. This person will be caught riding in tennis shoes, spurs on upside down, without a care in the world. The greenie will say things like “why did my horse just stop on the trail?” Because he’s pooping… and his bit is on backwards. That’s why.

This person will try to control everything and everyone around her — horses, riders, weather, etc. No one can relax under the reign of the control freak. Friends stop calling to ride, horses run away when she walks out of the house with a halter, dogs quiver under the couch. You are not allowed to leave the trail, stop for a rest, or talk when not being spoken to when riding with the control freak.

This person is drug along by their equine-obsessed life partner. He/she will ride along to make said lover happy. This person will always end up either back at camp taking care of food/trucks/trailer/horses or cooking for all of their spouse’s friends and trying to act interested in all the conversations around the campfire that are all about horses. If the non-riding husband/wife ends up riding, he/she always ends up with sore knees, a chapped behind and on the horse that is a closet bucker (one that decides to buck out of the blue, but has never been seen bucking a day in its life until the partner climbs aboard.)

This person has had enough drama in his life for five people and is over it. He would much rather ride alone than ever have to ride with anyone else ever again. He would rather risk be bucked off a cliff and left for dead in the middle of nowhere without a cellphone than ride with someone else for safety’s sake.

This lady is a disaster waiting to happen. If she didn’t have bad luck, she’d have no luck at all. She has the most broke, quietest of horses and still ends up hurt. Freak accidents are what she’s known best for. She’s had at least ten broken bones, one metal rod in her leg/back/neck/arm and two helicopter rides in her resume. She actually gave up riding at one point in her life, and ended up slipping off her front porch and spending five months wheelchair-bound. Then she realized if she’s going to get hurt, at least it will be doing something she loves.