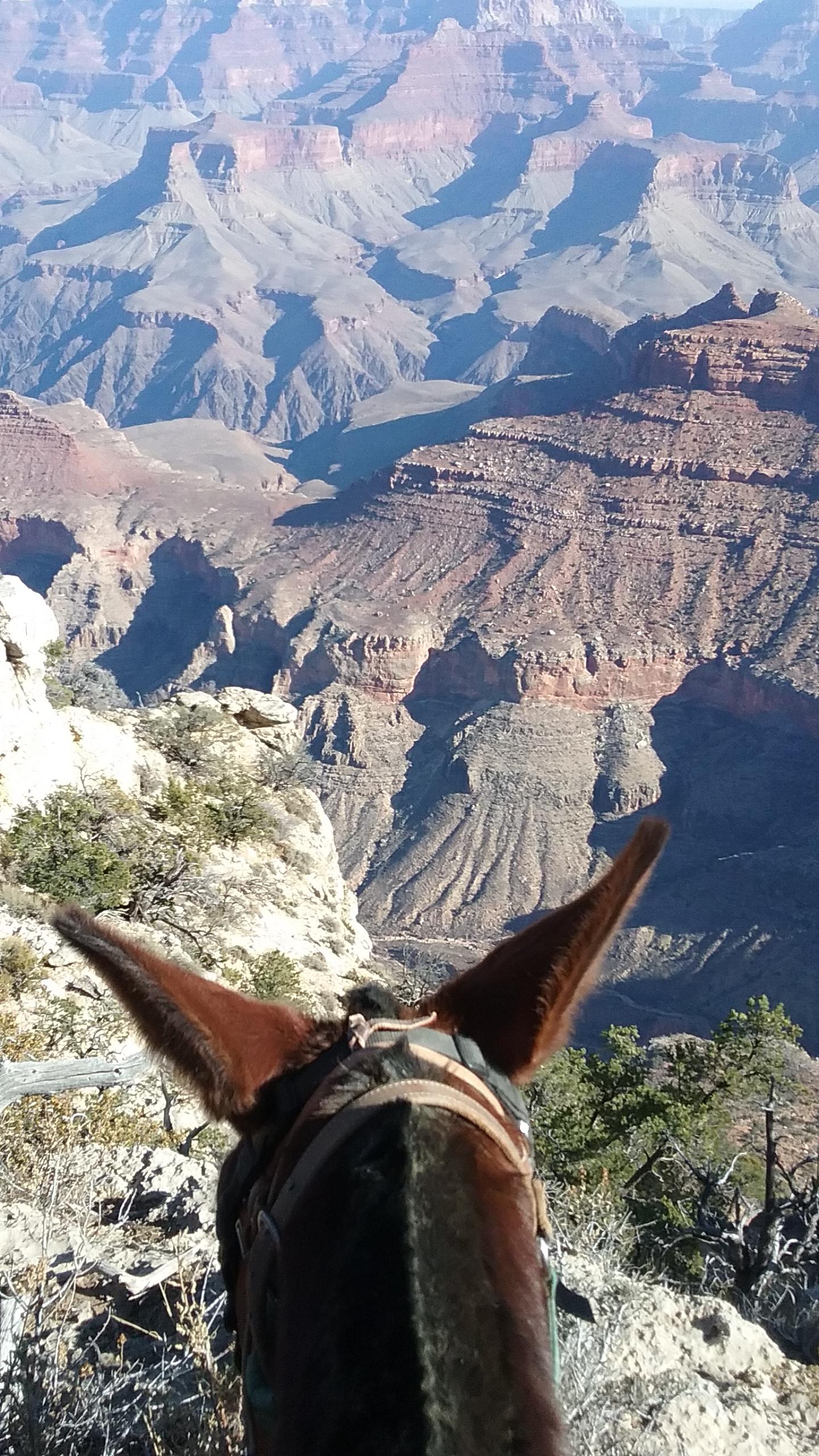 Maria Wachter has the scoop on a Grand Canyon mule tour.

I wonder if she ever gets tired of this view? Photo by Maria Wachter

I’ve been living out west for over a decade, yet had never been to the Grand Canyon. I don’t know why, I have no excuses — I mean, I’m only less than a two hour drive away from the west rim. I finally said to myself “I need to see the Grand Canyon!!”

I always wanted to ride a mule to the bottom on the Bright Angel trail and stay at the Phantom Ranch, but with my work schedule, I couldn’t afford the time off. Instead, I decided to book a ride for my boyfriend Terry and myself to ride a mule at the South Rim, which only goes along the edge and not down into the Grand Canyon.

This ride is called the Canyon Vista Mule Ride and costs $143 before tax and gratuity (don’t forget to tip your wrangler). In total, the whole ride is 3 hours long. 2 hours of riding, plus another hour or so that you will spend taking a van ride from one mule barn to the other and getting the low down on how to ride your mule, the rules, and the use of the “mule motivator,” aka crop. 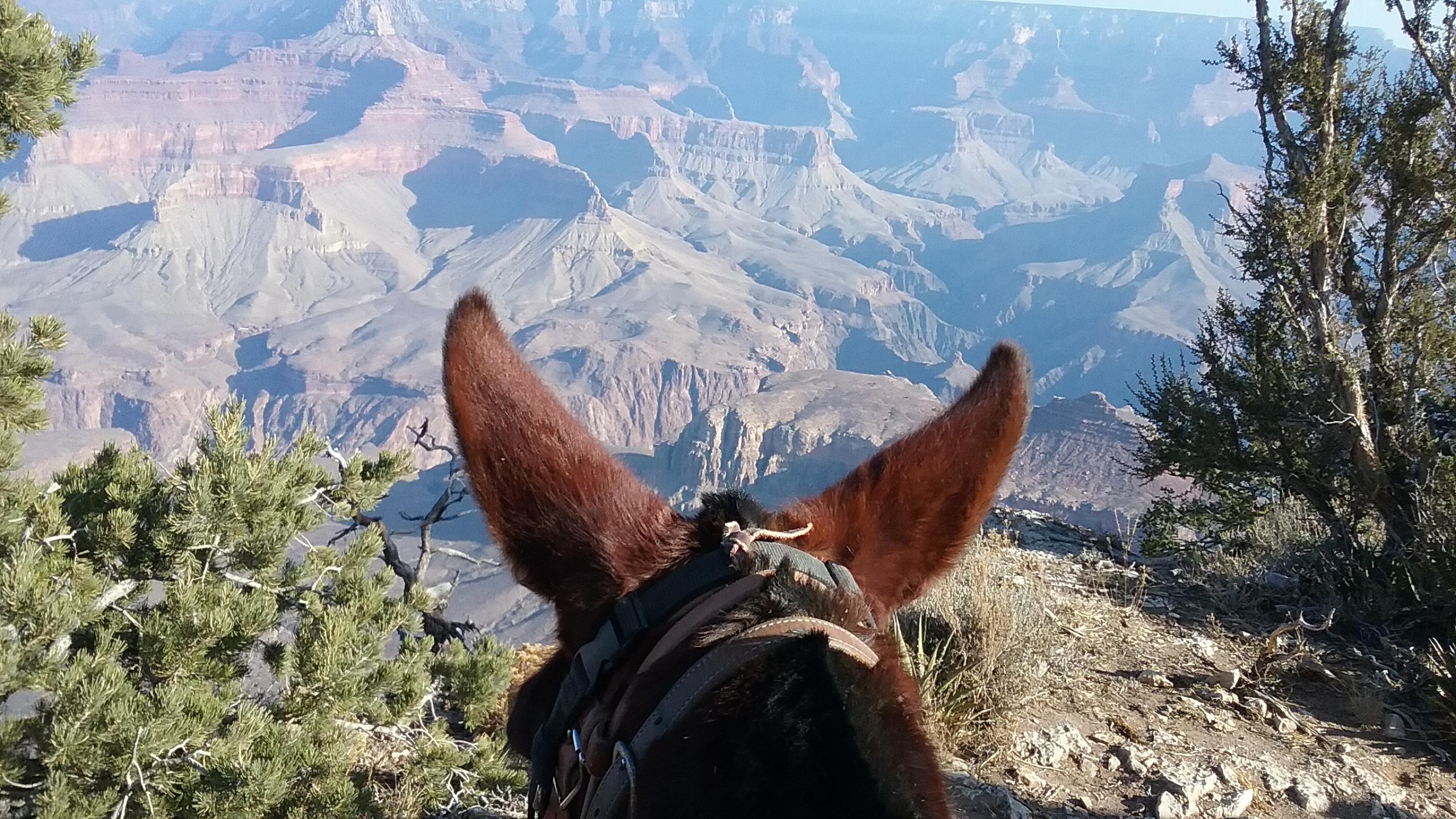 The Canyon Vista ride is the way to go if you’d like to see the Grand Canyon up close, but don’t want to spend two days in the saddle or have an extreme fear of heights. While this ride takes you right along the rim of the Grand Canyon, it doesn’t take you over the edge, which basically what the whole two day ride to Phantom Ranch and back would cover.

The mules used for the Canyon Vista ride are all retired mules that used to do the 2 day ride. So these mules are all older (the youngest being around 12 and the oldest 25 or 26) and could do this ride in their sleep. They all know the drill. They have been trained to basically zone out their riders, and just do their job. They don’t really get the whole concept of neck reining and stopping and going when you want them to (well, maybe they do, but if so they don’t want their riders to know). Each stop along the trail, the mules turn and face the canyon, lined up like they’re in the opening ceremony of the NFR.

They seem pretty unflappable — I even had a squirrel come charging at my mule at full blast and all she did was shy in place. I think if I had brought my own mule and that happened, I would have taken a short, one way trip to the bottom of the canyon and not of my own accord.

It’s an out and back ride, four miles total, and on fairly flat ground. You start off in the forest and within minutes, boom, there it is: the best looking hole in the ground I’ve ever seen. Once you make it to the rim, you’ll go two miles out, and turn around and come home the same way. There’s about six stops along the way, and each stop goes over the history of the canyon and why we ride mules instead of horses. Our gracious wrangler, Simon, also took everyone’s pictures — multiple pictures to get everyone’s good side, by the way. He also told us about his story and how he ended up being a mule wrangler at the Grand Canyon. 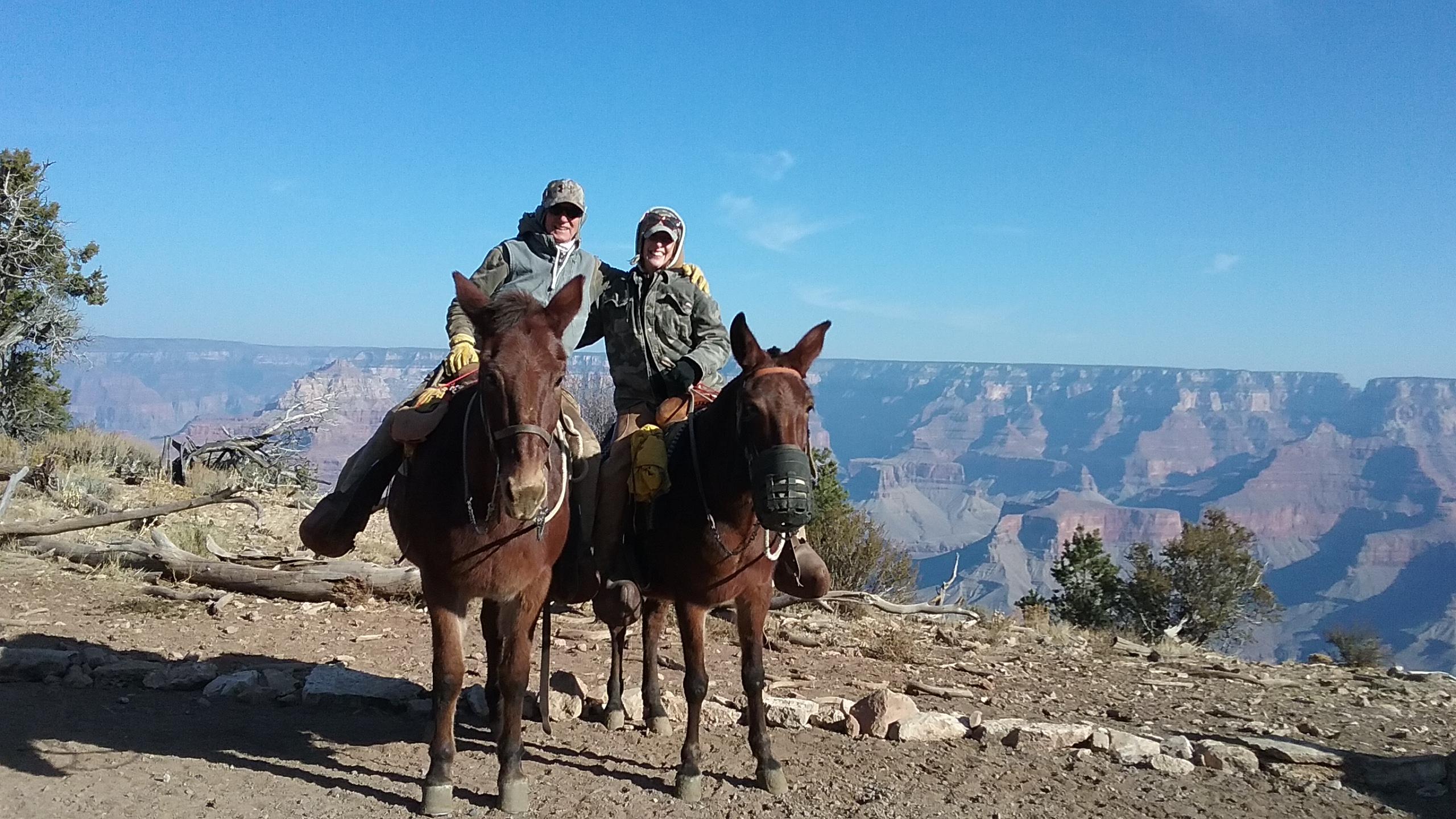 ​Terry on Reba and Maria on Woodstock. Photo by Wrangler Simon

The mules all had their own personalities, and really memorable names. I rode Woodstock, a molly mule that had a nice little comfortable gait and a sour attitude. She was upset that she had to wear her Hannibal Lecter mask, aka a grazing muzzle, and threw her head violently every 15 seconds the whole… entire… ride. She absolutely didn’t listen to me or the reins. I was pretty impressed how I had no control over her whatsoever. Thankfully she wasn’t vindictive, and got me back safely. 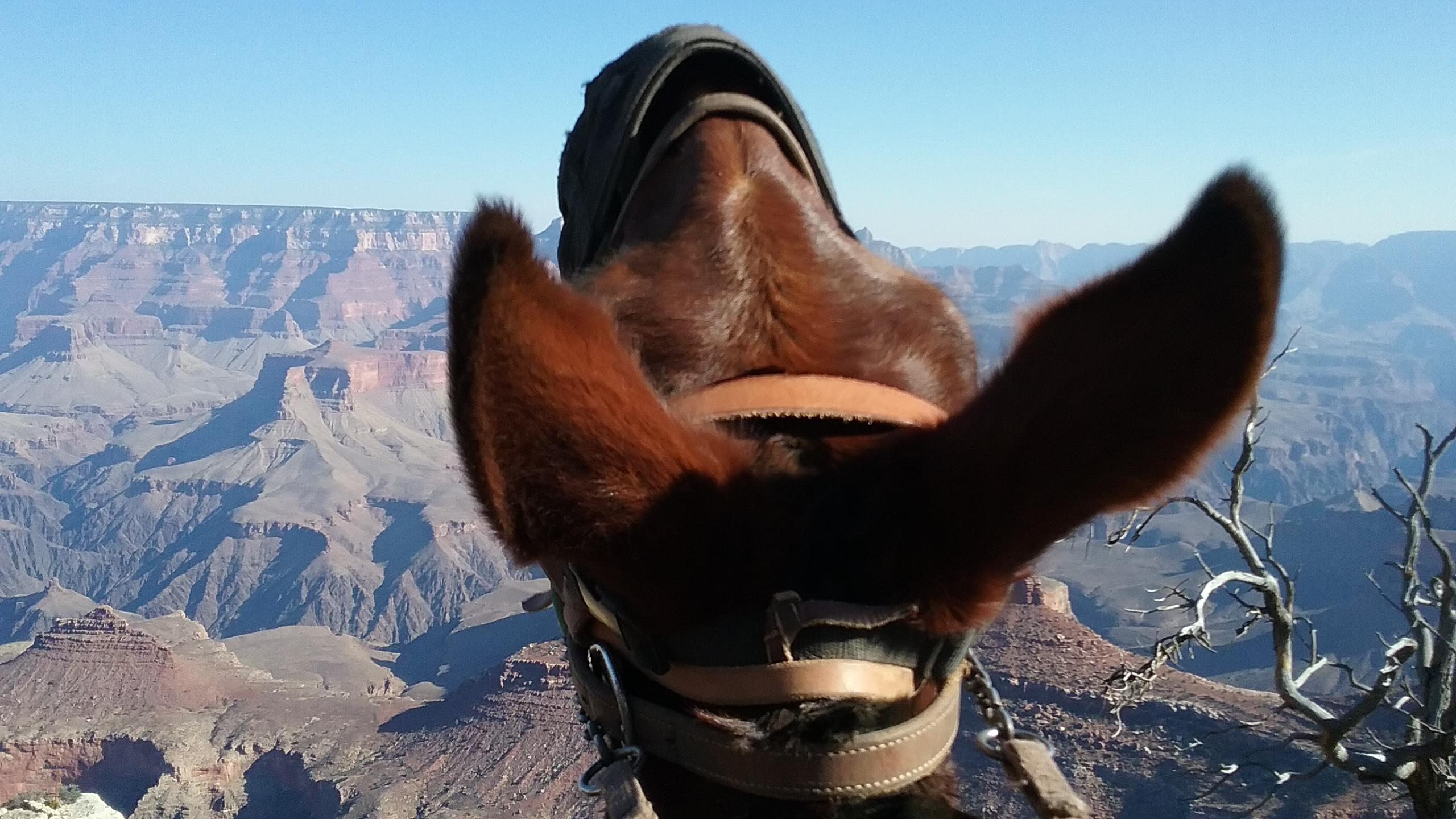 When we did our last stop facing the Grand Canyon, Woodstock saw a bush hanging over the edge and insisted on trying to scratch off her grazing muzzle on said bush. This meant she practically had to step over the edge to get to said bush. Even with my protesting and pulling on the reins with the strength to make an elephant back up, she made it adamant that she was going to do what she wanted to do. I thought to myself, if I do die, at least it would make for a scenic trip down and a good story for my boyfriend to tell. She finally decided that her and I both deserved to live for another day, or maybe she gave up with trying to get her mask off, and backed up from the edge and continued about on the trail. Thanks Woodstock, you’re too kind!

My boyfriend rode a tall, lanky mule named Reba. Reba was much sweeter than Woodstock, but had an insatiable appetite. Her goal was to eat the whole Grand Canyon, one sneaky bite at a time. Why didn’t Reba have to wear a Hannibal Lecter mask? Not fair, Reba, not fair. She did a good job of packing my boyfriend around safely, but he did mention her trot was that of a jack hammer. Hey, no one can be perfect, can they?

It was amazing to see the mule barns and all the mules used at the Grand Canyon. All the mules were well fed, well groomed, and their living conditions were immaculate. There wasn’t a skinny mule there, and supposedly there are close to 175 mules in the string. 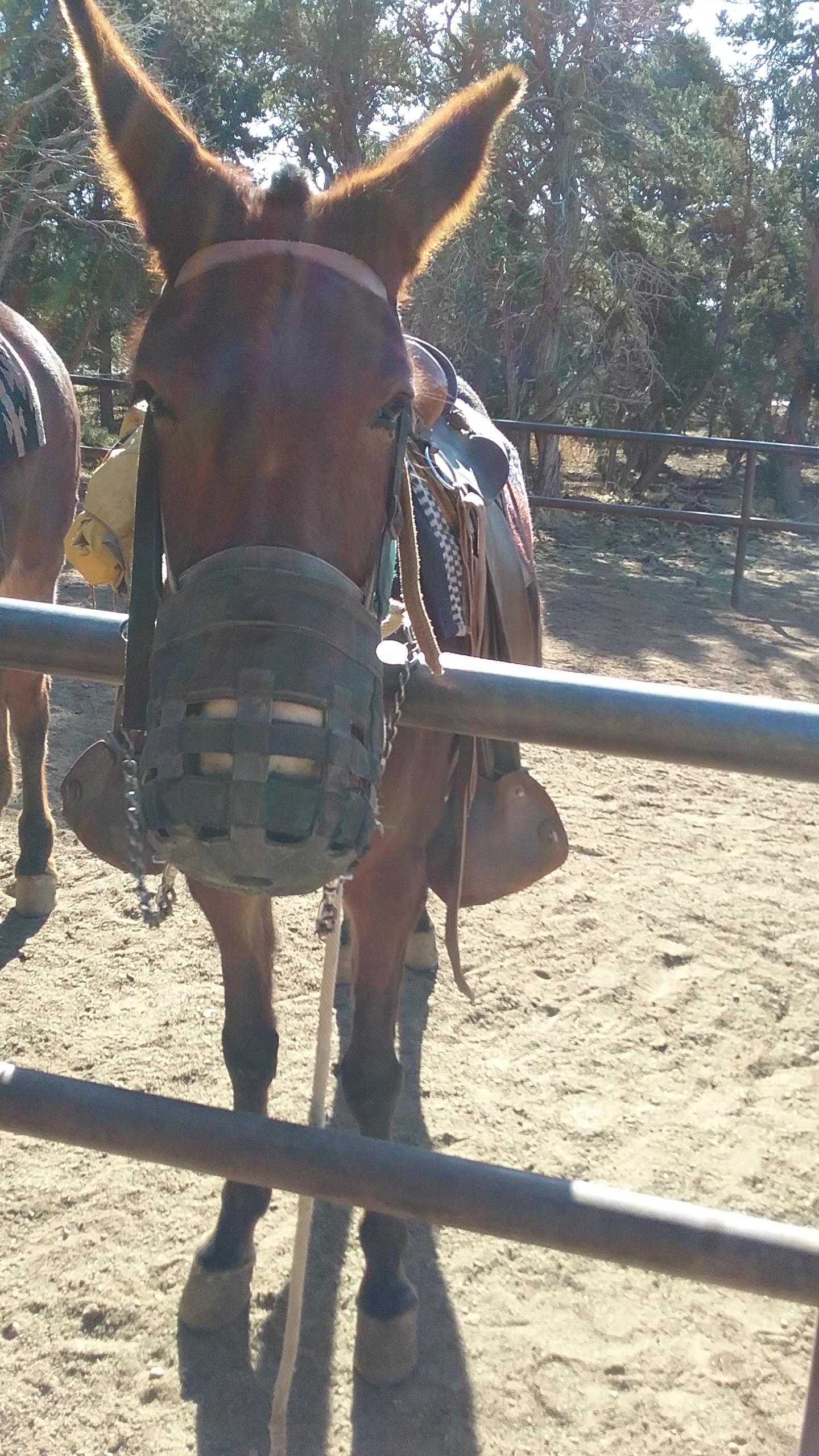 As for the Grand Canyon itself, the elevation was close to 7000 feet, and it was colder than a well-digger’s behind on the day we decided to go in December. I don’t think it got above freezing the whole day. My toes were frozen and felt like they could shatter at any second. But even being half-frozen, I’d do it again in a heartbeat to be able to ride a mule and look at one of the seven natural wonders of the world at the same time. It was money well worth spent.

If you’ve been thinking about doing this, do it! It’s a trip of a lifetime!