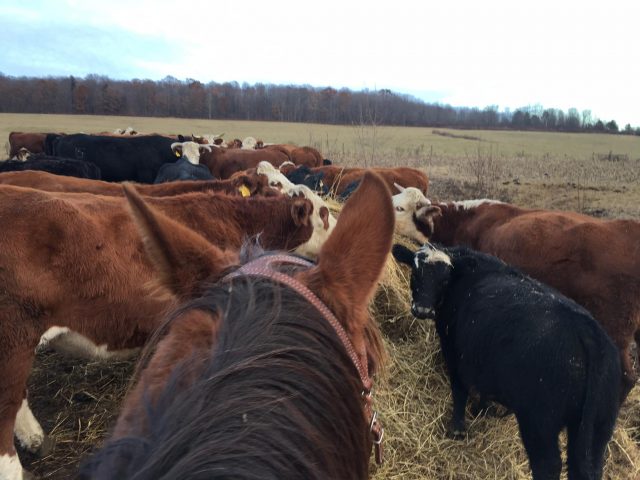 Kristen Kovatch is well aware she’s not the first person to ever make a Thoroughbred into a ranch horse — she walks us through the Thoroughbred’s contributions to ranching and the cornerstone of the American Quarter Horse, now respected as the ultimate ranch mount. 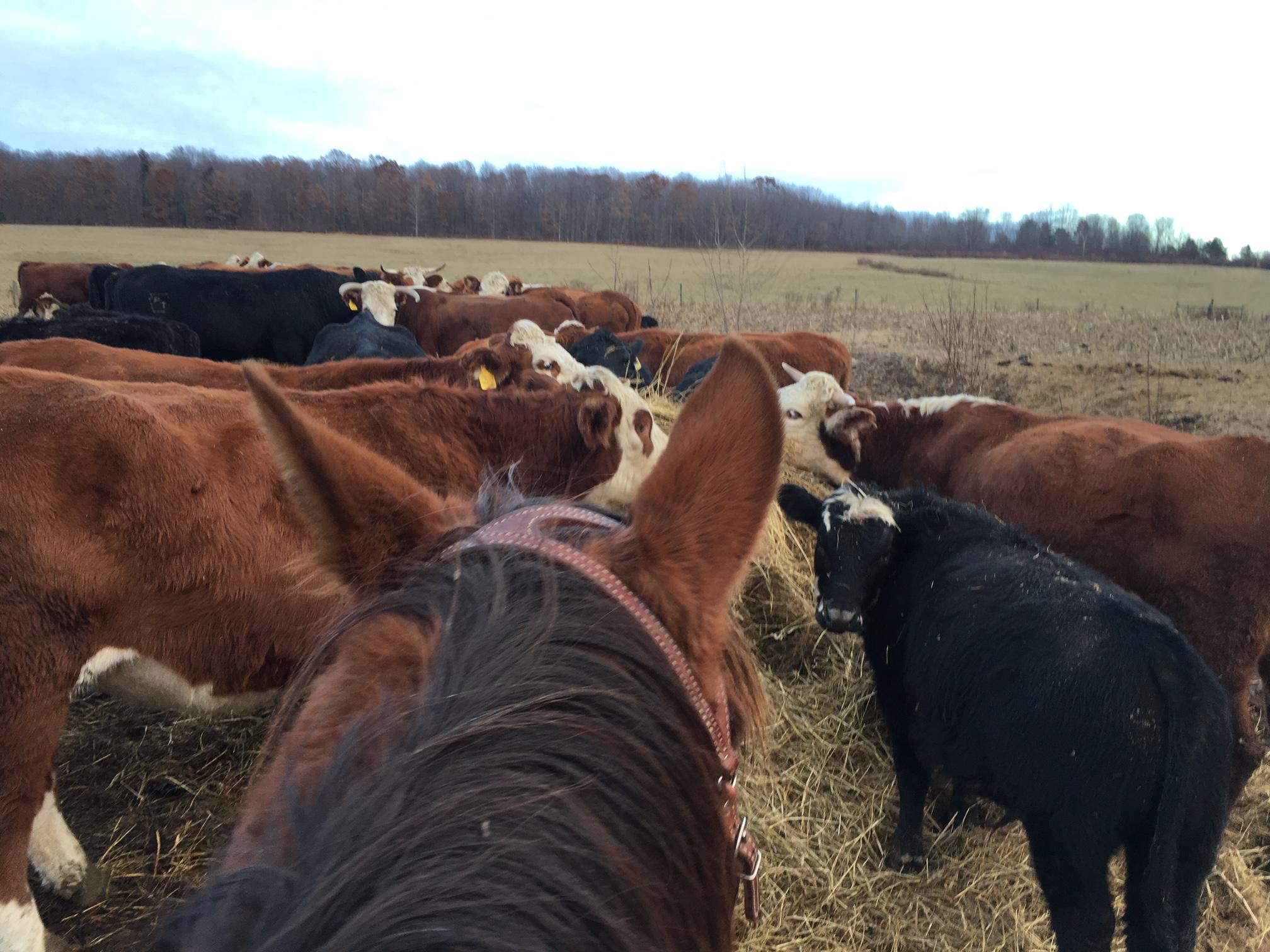 As many readers were wont to point out after my introduction of Jobber Bill and my intentions to make him a working ranch horse, riding Thoroughbreds on the ranch is not a new concept. I’m certainly not the first person, nor will I be the last, to take an off-track Thoroughbred and use him around the farm both for recreation and for cattle work. I don’t pretend to be a pioneer in this field — a quick peek at history will show us that the Thoroughbred was a key player on America’s early ranches and a major cornerstone for the development of the American Quarter Horse, which is now widely hailed as the ultimate ranch horse.

The use of the Thoroughbred as a ranch horse far, far predates the upward trend enjoyed by the OTTB in recent years as efforts grow to network, find the retiring racehorse a good, forever home and champion the versatility and usefulness of these horses. With some of the most recent high-profile OTTBs found in eventing — think Blackfoot Mystery, who went all the way to the Rio Olympics in 2016 — and other English disciplines, it’s easy to get in the mental rut that these horses are best suited to those worlds. The high-profile western competitors of the world do tend to favor the Quarter horse and similar stock breeds — but plenty of riders are discovering what history has shown us all along, that Thoroughbreds are equally versatile for the western disciplines and can excel there as well.

The influence on the Quarter horse

Thoroughbreds were imported to the American colonies as early as the 1730s and bred and raced almost nonstop throughout the nation’s early history (the importation of Thoroughbreds from England obviously came to a halt during the Revolution, but soon picked up again after). Races shortened significantly after the Civil War into the distances we recognize today, typically ranging from five furlongs to a mile and a half. The early American Thoroughbred stud book included not just full Thoroughbreds but locally-bred sprinters as well with or without Thoroughbred blood, referred to by a variety of names on the central theme of “quarter-mile running horse.”

Flash-forward to 1913: Great Britain was so concerned about these “impurities” of blood in the American Thoroughbred that it passed the Jersey Act, preventing the registration of American Thoroughbreds in Great Britain’s General Stud Book unless ancestors to the ninth generation were all registered. The American Stud Book had not been founded until 1873, about a hundred years after the founding of the General Stud Book, and only required that five generations of ancestors be registered. American horses were winning races in Great Britain during the US ban on gambling — despite the influence of such “impure” blood. The Jersey Act was eventually repealed in 1949.

As America pushed westward in the years following the Civil War, the Thoroughbred came too. History gets a little subjective here depending on which version you’re reading: some state that the innate “cow sense” that a good working horse possesses came from the influx of Spanish blood via the free-roaming mustangs in the American West rather than the fleet-footed Thoroughbred. It cannot be denied, however, that the Thoroughbred was a key player, especially in Texas: when the American Quarter Horse Association was formed in 1940, the pedigrees of nearly all of the first foundation stallions included a healthy dose — sometimes 50% or even more — of Thoroughbred blood.

Naturally, in the days before pedigrees and bloodlines were recorded by the newly-formed AQHA, much of the details could be left up to conjecture and debate, but generally, a lot of these lines are agreed upon. Just to name a few:

Okay, before the foundation Quarter horse people come after me, it’s important to understand that generations of breeding have certainly changed both of these breeds. The modern Thoroughbred is not necessarily the same as the horse that helped settle America; the modern Quarter horse has so many different types depending on the later influx of more refined Thoroughbred blood that there are now recognized sub-types within the breed. The modern foundation Quarter horse “movement” was started as a response to that constant Thoroughbred influence to help the breed return to its “bulldog” type roots… even though that type was heavily influenced by earlier versions of, yep, the Thoroughbred.

What I’m getting at with all of this is that some of the best foundation cow horses in our history have been heavily influenced by Thoroughbred blood. View any of the reference or foundation pedigrees on some of our most legendary Quarter horse ranches, such as King Ranch or Four Sixes, and you’ll see plenty of Thoroughbreds — and pretty close up in the pedigrees too. 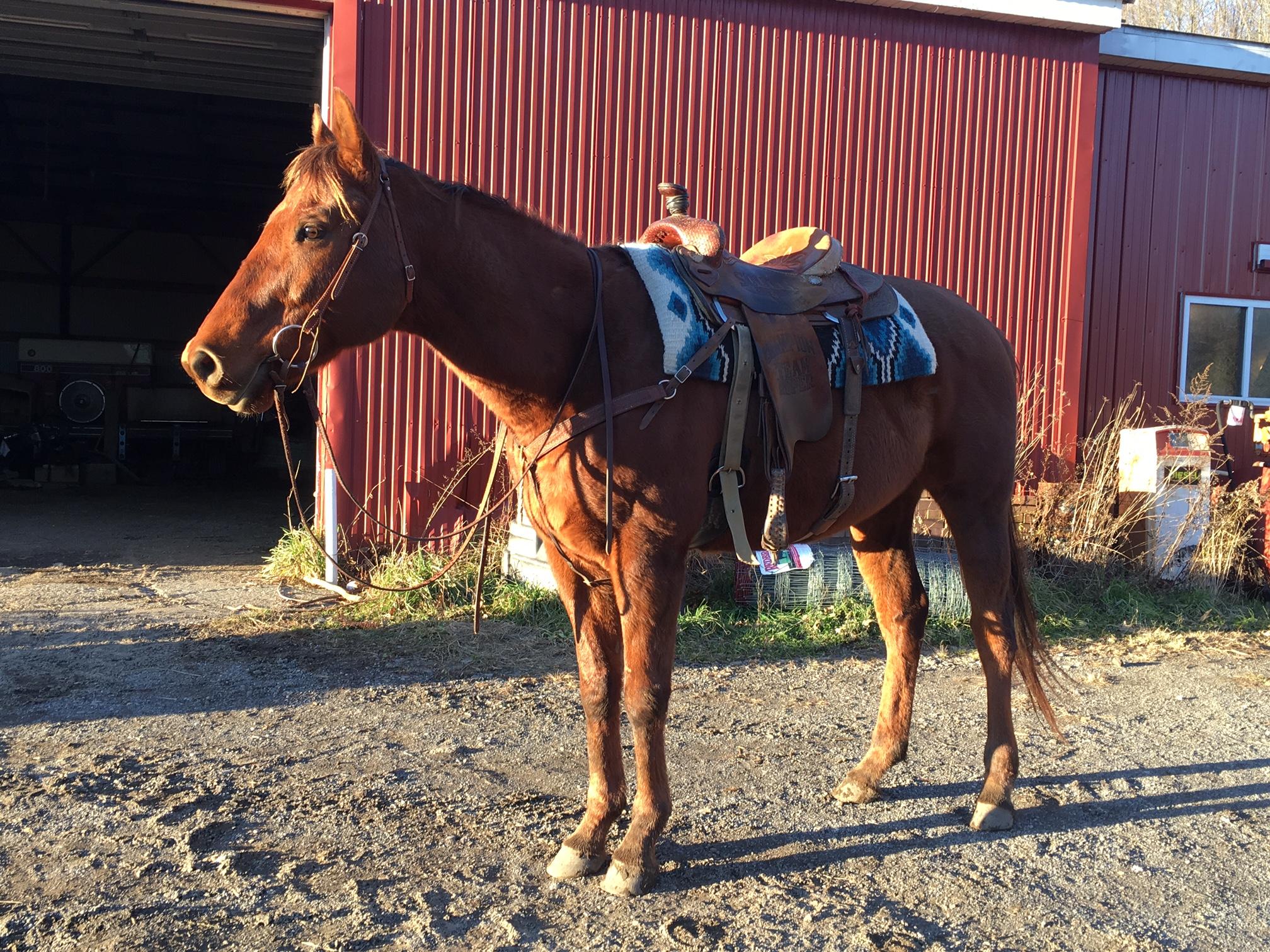 I’ve ridden many excellent Quarter horses on cattle. I’ve also ridden some fabulous mustangs and Arabians who were just as nimble on their feet and game to scramble up and down mountain trails in pursuit of wayward cows, with just as much cow sense as the Quarter horse. The Quarter horse (and his stock relatives, the Appaloosa and Paint) certainly holds the reputation in the US as the cow horse of choice, the most popular breed in the country and the breed most likely to be found in the rodeo arena or cutting pen as well as the working ranch — but they are by no means the only ones; you only have to look around a little bit to find Arabians, mustangs, Morgans, gaited horses and, yes, Thoroughbreds holding their own on a much smaller scale.

So, in the most drawn-out and lengthily researched response possible, no. I’m not breaking new ground with Jobber Bill — I’m just bringing this little Thoroughbred full circle, back to those foundations of the massive ranching empires that ruled the West. I’m joining plenty of other riders through the decades and those riding alongside me today who have recognized that a good horse is a good horse, no matter what his breeding may be. He may look quite different from his forebears who first chased cows across the Texas plains, but I believe he’s no less capable than his very distant Quarter horse cousins in the pasture grazing alongside. So far he’s given me no reason to believe otherwise. 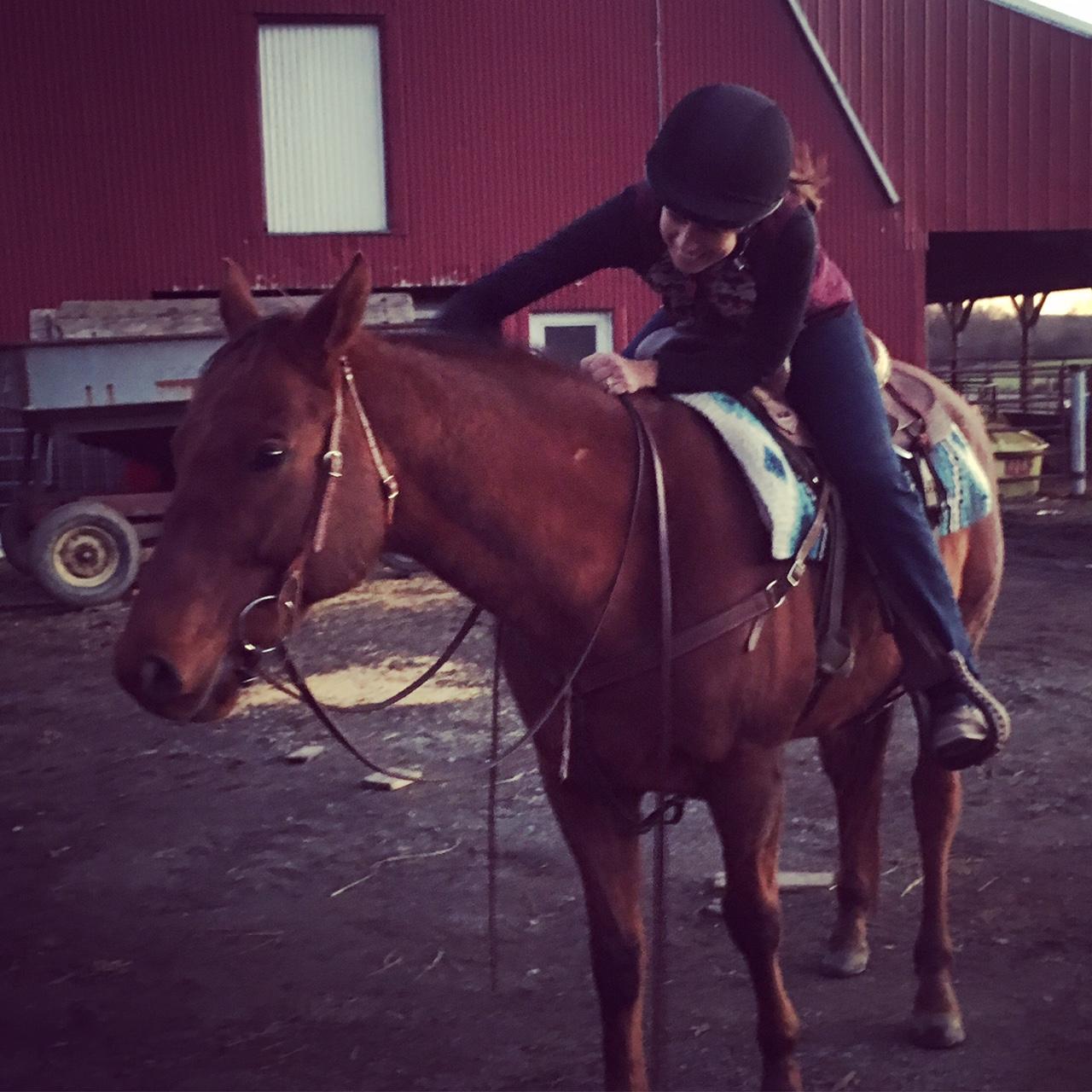