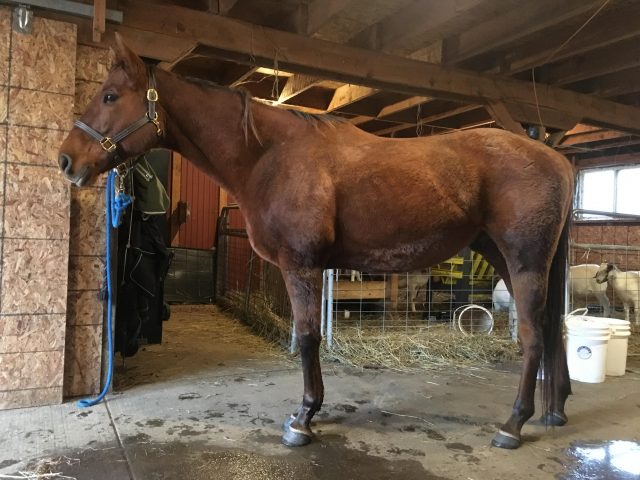 “The plain ones, the less-than-perfectly-conformed ones and the seemingly ordinary ones all need homes as much as the halter-perfect chromy 10-movers.” Kristen Kovatch takes the OTTB plunge with “Jobber Bill.”

Horse life for me, recently, has centered around two concepts: having a good time and falling in love with the sport all over again, and keeping my small herd of geriatric retirees in good health.

Those two concepts aren’t mutually exclusive; a lot of my time in the saddle or on the driver’s bench is spent making sure that the seniors are getting adequate exercise to keep their joints fluid and mobile. There are plenty of days where I neither ride nor drive, but simply walk among the horses in their pasture or paddock as they dive into their daily grain, running my hands over legs and checking hooves, picking an endless amount of burdock out of manes and tails and just enjoy being in the presence of six happy horses living what to them is their best life.

For several years now, this has been joy — the juggle of keeping the herd fat but not too fat, blanketed for the oldest but not too warm or coddled, independent but not so feral they forget how to be handled. This has been enough. I had needed a shift, a break, after years of frenetic activity teaching riding, coaching two teams of college and high school riders and keeping 30-something horses in training and good health. For about 24 hours after moving here to the farm, I didn’t want to ever be involved with horses again.

So nursing along the six “old men” (in various stages of aging) was the balm my equestrian soul needed… until that wandering cowgirl spirit cleared her throat again. I was doing pretty well with this equine nursing home, if I did say so myself. And I wanted a new challenge. 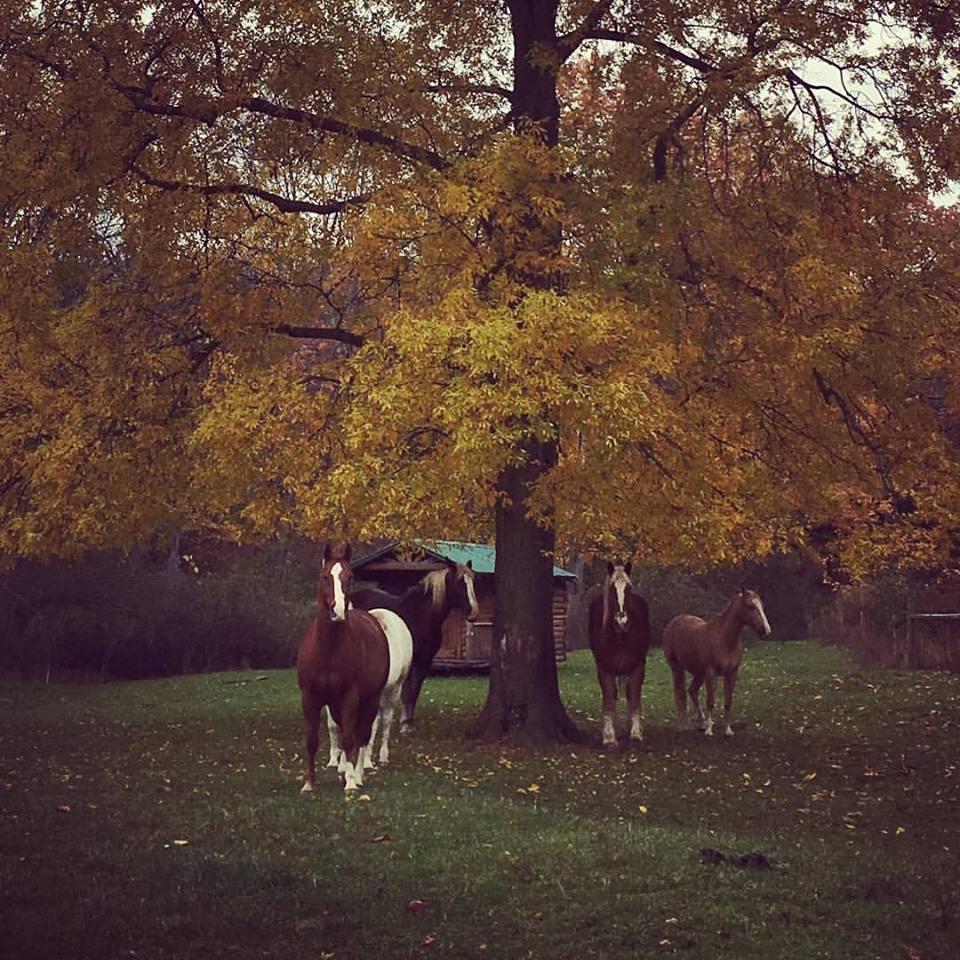 I do love this posse of old farts. Photo by Kristen Kovatch.

Readers may remember Jackie Wyatt and the OTTB Jobber Bill — the former exercise rider who took her favorite mount off the track when his racing days were over, with hopes that both of them would find an enjoyable second career perhaps in the jumpers arena. When we shared Jackie and Jobber’s story in January of this year, she had just restarted him after a few months of turnout.

And sadly for Jackie, that was pretty much where her regular riding had ended as well. As can and will happen with the best-laid plans of equestrians, Jackie’s work responsibilities shifted in early 2017, and she found herself traveling for extended periods of time, fitting in a ride on Jobber here and there but mostly stopping by simply to visit. With the possibility of an international transfer to another branch of her company, it was suddenly necessary to find Jobber a new home.

“You should take him! He wants to be a cow pony,” Jackie told me early this fall, half-teasingly. And half-teasingly, I began to respond that the last thing I needed was yet another horse…

But the concept of training an off-track Thoroughbred for working ranch actually had been floating around in my mind. I had worked with several OTTBs in hunt seat lesson settings before and overall found them willing to please, eager to get to work and talented in a variety of ways. With OTTBs brought more and more to the forefront and championed as true versatile all-around horses, it struck me as the ultimate in “sustainable horsemanship” to ride one in a western setting, the place where you don’t necessarily expect to find a Thoroughbred. There really wasn’t a good reason that the stock breeds should have the working cow horse world totally on lockdown.

We didn’t really have a great facility for letting down an OTTB from the track — we don’t have big cushy box stalls or a roundpen space. But Jackie had already done the let-down, and Jobber was already living out 24/7 including a full Ontario winter, which was much the same in terms of temperature and snowfall as western New York.

Besides that, I’m a huge fan of horse racing. And it only felt right to support the industry on all ends — including the critically-important aftercare for these athletes.

I sold my case to my sister-in-law and grandfather-in-law, who, bless them, fully support my horse addiction in exchange for my help around the farm with various chores — stacking hay, herding goats, rounding up escaped cattle and the like. With their blessing, I finally responded to Jackie.

We brought Jobber Bill home on Monday after a long morning of driving up to Ontario and back, successfully importing our first horse into the United States. I finally had my OTTB. 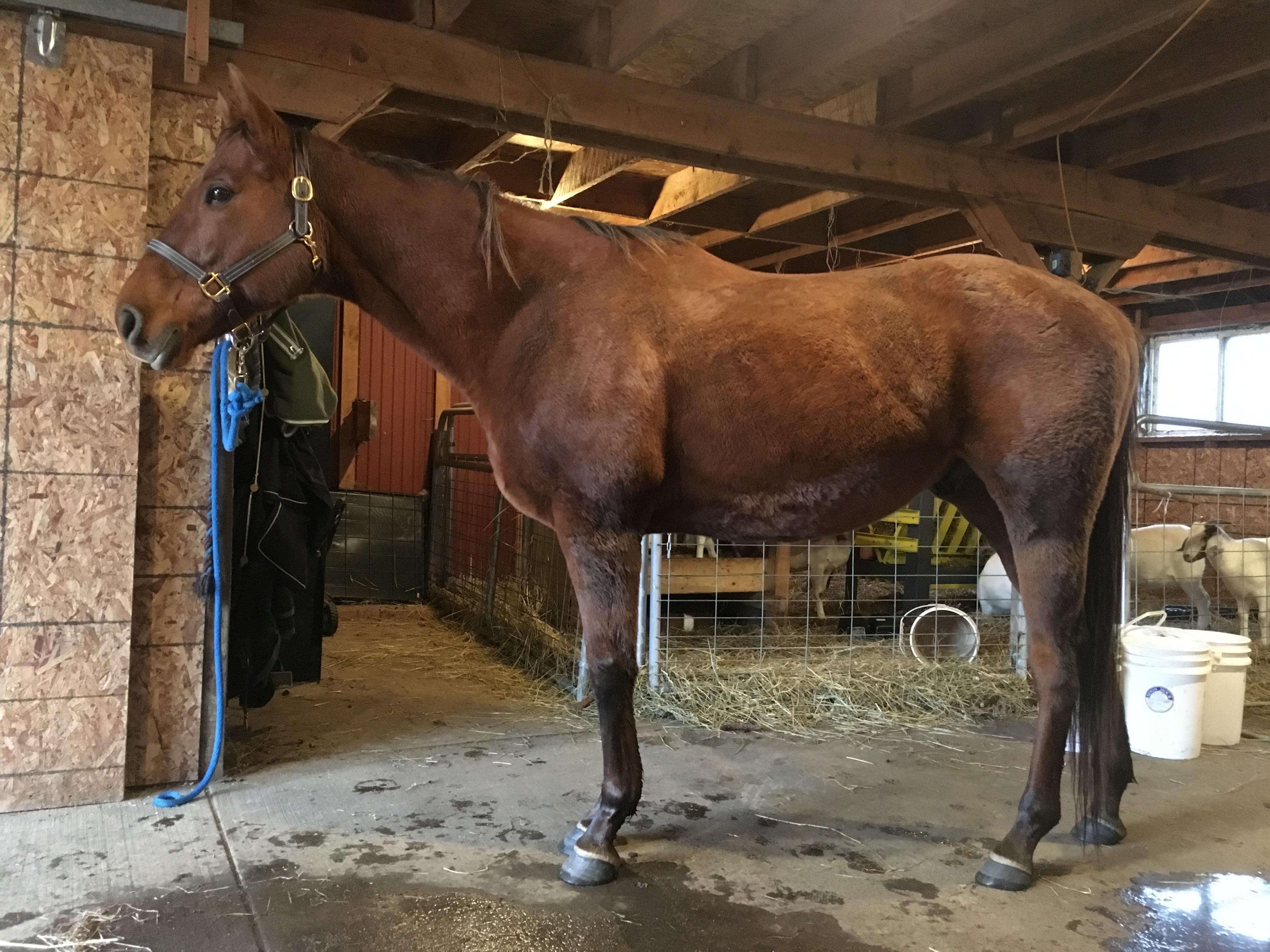 Jobber Bill on November 15, 2017 — a benchmark. (Bless his heart for giving zero hoots about all the goats.) Photo by Kristen Kovatch.

He’s not a lot to look at: a sort of mud-colored fellow with essentially no markings at all; his legs seem to always be pointing in four different directions (the above photo is truly an anomaly) and he tends to stand in a way that makes him look a bit over at the knee (again, this isn’t evident in the above photo — how I captured this moment, I will never know). He’s got a bit of a paddle to the right fore when he’s trotting.

Then again, the plain ones, the less-than-perfectly-conformed ones and the seemingly ordinary ones all need homes as much as the halter-perfect chromy 10-movers. Jobber’s frame stayed sound through 34 starts even if he’s not the “perfect” build.

Heaven knows I’m not a perfect rider. I am certain I will make mistakes with Jobber — hopefully none of them too severe. I will make some bad decisions. I don’t know anyone in the horse world who hasn’t, though I know plenty who would never own up to it.

And in the end, if all of these imperfections can still come together to produce a competent, safe, productive working relationship, a solid, respectable using horse for us around the farm to move cattle and check fences, then I’ll have proven not only to the world that OTTBs can be great working ranch mounts… but I’ll have proven it to myself as well, the harshest critic of all. 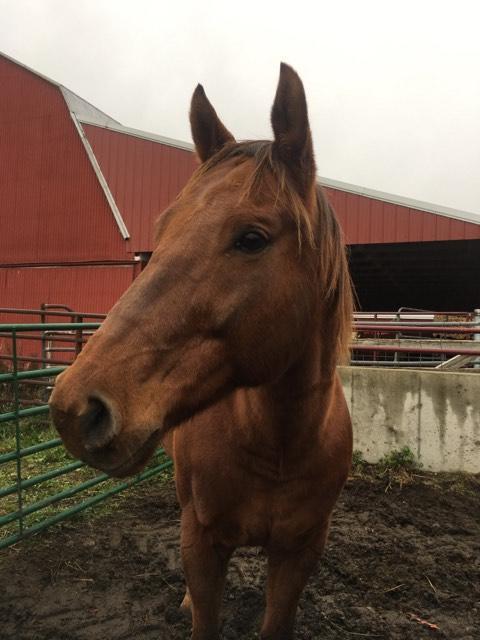 Jobber Bill is eligible for the 2018 Retired Racehorse Project (after literally going through a calendar with Jackie and figuring out just how many training rides she had put in — thanks for your patience, Jackie) and I’ll be applying in December. The RRP remains a secondary goal — if we’re ready for Kentucky next October, we’ll look forward to the show. If not, we’ll be riding on at home.