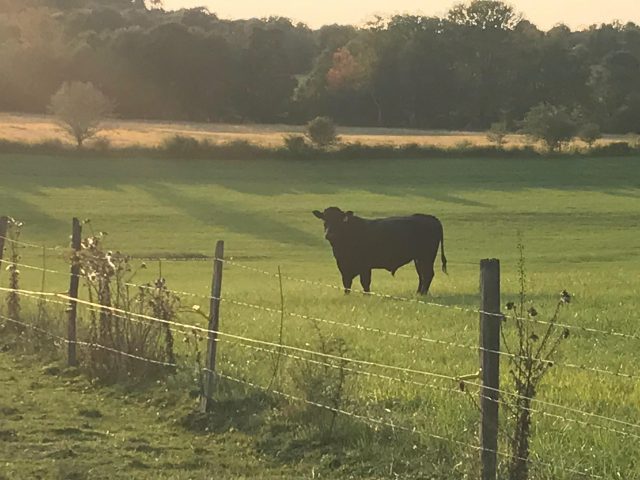 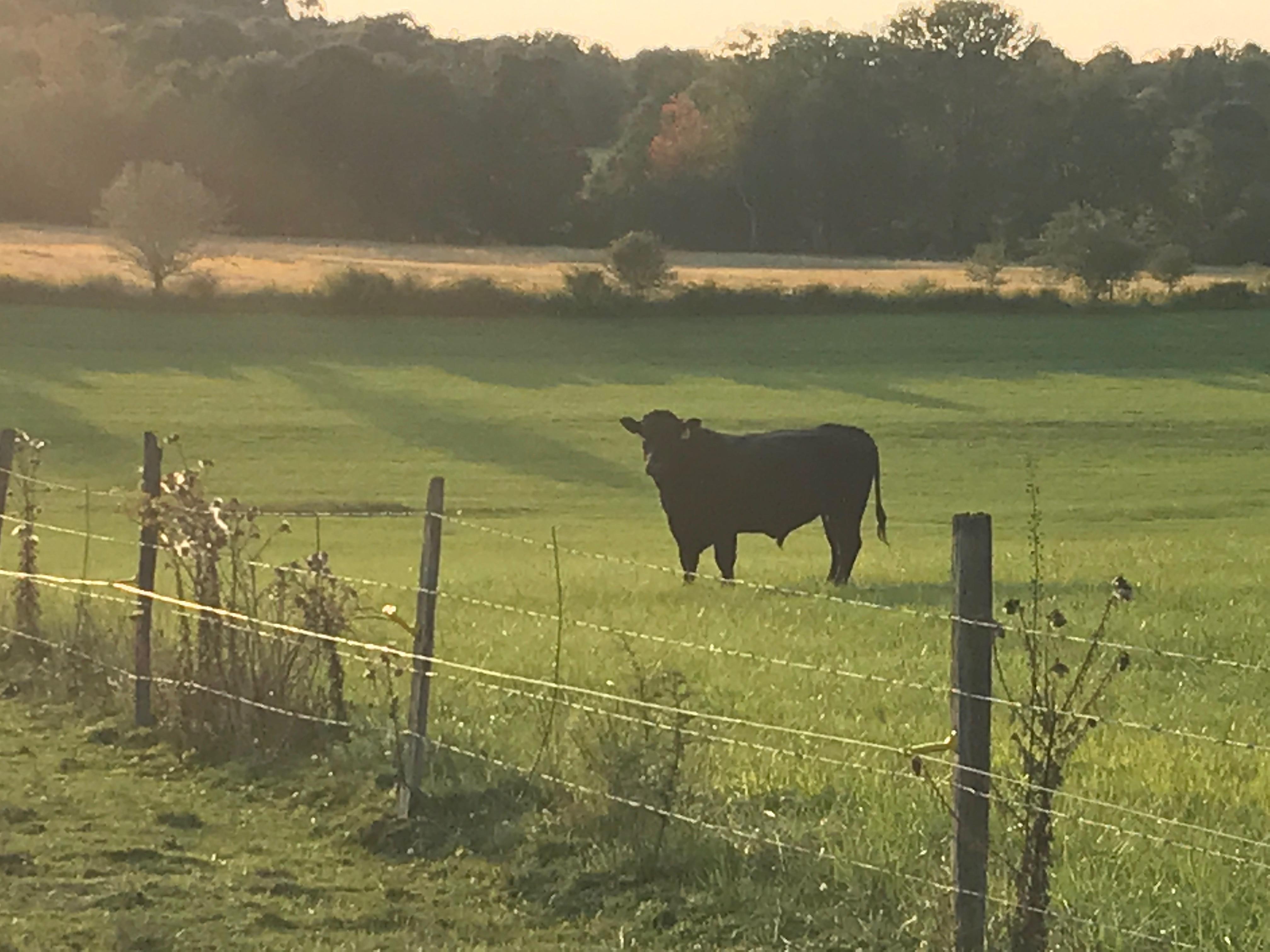 Joe’s money shot. Also, this is not at all where he was supposed to be at this moment in time. Photo by Erik Bentley.

When we last left our heroes (yes, that would be me, my sister-in-law Kaitlyn and my trusty steed Red), the “cavalry” had just arrived: namely, my husband Erik and farmer-in-chief Grandpa Allen, Erik and Kaitlyn’s grandfather, both equipped with a couple of pickup trucks. The bull Joe and his wayward cows had marched the perimeter of the farm, testing the fence and failing to find a place loose enough to wiggle back home — ah, the perils of actually building a good fenceline.

Being a small farm, the cattle are pretty well trained to know that good things come from pickup trucks — the staff from the farm stand bring up bruised produce and corn husks from the market to feed out to the cows, so generally when the herd sees a truck approaching and hears the horn start honking they gather.

I admit freely that while the arrival of trucks would most likely bring a quick ending to this particular adventure and get all of our livestock safe and sound within stout fencing again, a small part of me was a bit disappointed — it always feels like cheating to me when the internal combustion engine comes into play rather than my skills in the saddle. Nevertheless, a quick and painless resolution would be helpful right about now; no one wants cattle running to the county airport or menacing the neighborhood kids for their lunch money.

As I crossed the top of the pasture, keeping a visual on the cows as they continued to crash through the thick woods, I was aware of Kaitlyn climbing up out of the ravine with a bucket of fencing tools, then spotting the truck and jogging down the ridge to meet Erik, who was attempting to shoo the rest of our horses out of his way in their division of the pasture (knock some wood, but I’d just like to point out that our horses actually respect fencing. There, I said it.)

The Ford roared up the hill, trailed by the cows and calves that were still contained where they ought to be, looking hopeful for handouts. Erik stopped the truck in the middle of the field and climbed out, wielding one of Grandpa Allen’s many canes — helpful for looking intimidating to cows, but rarely actually employed in self-defense, the cane was a critical piece if you were planning to take on Joe the bull on foot. Kaitlyn clambered into the bed to throw ear corn to the good cows, hoping to create enough of a ruckus that the escapees would break in to join the party.

Erik marched past me, workmanlike, the cane propped over his shoulder, and slipped between strands of wire into the woods before disappearing completely into the shadows: choked with wild grape and thorns and burdocks and probably poison ivy and tick-infested weeds for good measure, there was little chance that a horse and rider would be able to move, let alone be effective. For the next few minutes, the only indicators I received of Erik’s progress through the woods was the distant growl of “get up, cow! Get up, cow!” punctuated occasionally by a leafy crash and some muttered swearing.

From where I sat on Red’s back, feeling fairly useless, I could see that this was a futile exercise: the cattle had bunched up at the fenceline, gazing longingly at their well-behaved counterparts who were happily munching on corn, but unable to wiggle between the strands of tight wire. I turned in the saddle to call across the field to Kaitlyn.

“You’re going to have to cut the fence! That’s the only way they’re going to come through!”

Kaitlyn, abandoning her truck to two dozen persistent cattle, scurried across the pasture wielding the wire cutters. We paused for the briefest instant, gazing upon the beautiful five-strand fence in a moment of silence, before she carefully snipped each line. We moved out of the way and watched.

First one cow, hesitant and unsure, stepped ever so daintily over the line where the fence had previously stood, then grew bolder and strode across. Then another. Then two more, and a handful of calves. Just as I was about to cheer, one particularly obstinate cow, firmly believing that the rest of her friends were practicing some sort of bovine witchcraft to have transported themselves across what was clearly still an existing fence, turned and headed down the hill, away from the opening.

“Erik!” I screeched into the trees. “The black white-face cow is coming your way!” Before I could watch how this scene played out, Joe, in all his majesty, strode past the fence opening in the opposite direction, a big, glorious moron gliding back into the woods in utter confusion. “Sonofa–” I muttered, pointing Red back up the fenceline to try to influence the bull from the pasture side.

“There’s no fenceline,” Erik’s voice rang out suddenly from the woods. “That black white-face just walked right into the hay field.”

Fabulous. I relayed to Erik the bull’s location and he started tramping back to try to show him the way. It was at that moment that Red’s back suddenly lifted, his tail fanning the air, his head lifting like a banner with his ears pricked. I looked down the valley in horror to see Grandpa Allen cruising across the horse section, heading to the hay field gate to try to bring in the black white-face, flanked by Red’s two best horse buddies waddling along at their top speed of a mid-range lope. “FWAH,” said Red, in that sort of blow-snort that immediately precedes a total meltdown.

“If you get me killed, I will come back and haunt you,” I growled to Red, driving him forward into the bridle to focus on something else for a change. A few tight trot-circles later, he had changed his mind and realized that focusing on the task at hand was much more important — just in time for me to glimpse Joe crashing right through a hedgerow to follow his black white-face lady friend.

Erik followed in hot pursuit, still wielding his cow cane, as I turned Red to follow Kaitlyn’s truck down the hill. She sped off in the direction of the hay field and I trailed along behind, driving the last few cows into the more secure horse section.

“They’re gonna need you in the hay field,” Grandpa Allen called, pointing his own cane towards the velvety-green sloping meadow where Joe and his new best lady friend were standing on high alert, watching Erik’s lonely progress on foot out of the woods. Visions of my husband being trampled to death by these hellions flashed through my mind, and like a good white knight riding to a beloved’s defense, I gathered my reins and Red and I galloped past Allen and into the hay field.

A brief interjection: reined cowhorse, in my opinion, is one of the few arena disciplines that is still firmly rooted in its real-world applications. After the reining pattern, or dry work, the horse and rider must box a single cow (demonstrate control on a short end of the arena and ability to turn back the animal), then perform two fence turns at speed down a long side of the arena (the signature crowd-pleasing maneuver), then the most challenging of all, circle the cow in each direction in the middle of the pen. I competed in reined cowhorse for several years, and if I were to ever take up showing again in a serious way, that’s the discipline I would choose again in a heartbeat.

All of this flashed through my mind as Red and I thundered into the field, flashing past Erik as Joe and the cow turned and started loping up towards the next hedgerow. “Give ground,” I could hear my old coach and mentor calling, “give ground and let them turn.” I angled Red up towards the hedge while also yielding to the right, moving faster than the cattle and gaining on them every stride but increasing the bubble of space around them so I wouldn’t pressure them into leaping right into the next field. Just before we all collided headlong with the barrier of brush and thorns, the cows stopped and turned, and Red sat right down and turned with them.

Confused, perhaps lost, and definitely ticked off, Joe pulled up for a moment, focusing on the lone figure of Erik, out in the center of the meadow clutching his cane. Red and I reacted at the same time, leaping forward to head the bull off before he decided that Erik was the perfect place to take out all of his frustrations, and we circled the bull, turning him off back towards the open gate that would bring him home.

For the second time this day, Joe, the big, beautiful idiot, careened right past the open gate, his cow in tow, Red and I flat-out in hot pursuit. Once again, before the pair could find another path of escape, Red was right there, turning them back. This time, they finally found the open gate and streaked through to rejoin the rest of the herd at last.

As a motley family crew, spread between two trucks and a tired-but-clearly-pleased-with-himself cow pony, we pushed the herd down into their usual winter pasture to cool their heels for a few days, with plans to tackle fence repairs first thing on Monday. As the procession wound its way back to the barn under a golden late-summer sunset, I leaned down to give Red’s sweaty neck a hug.

“Take care of your horse and then come over,” Grandpa Allen called from his truck window. “Grandma’s making dinner.”