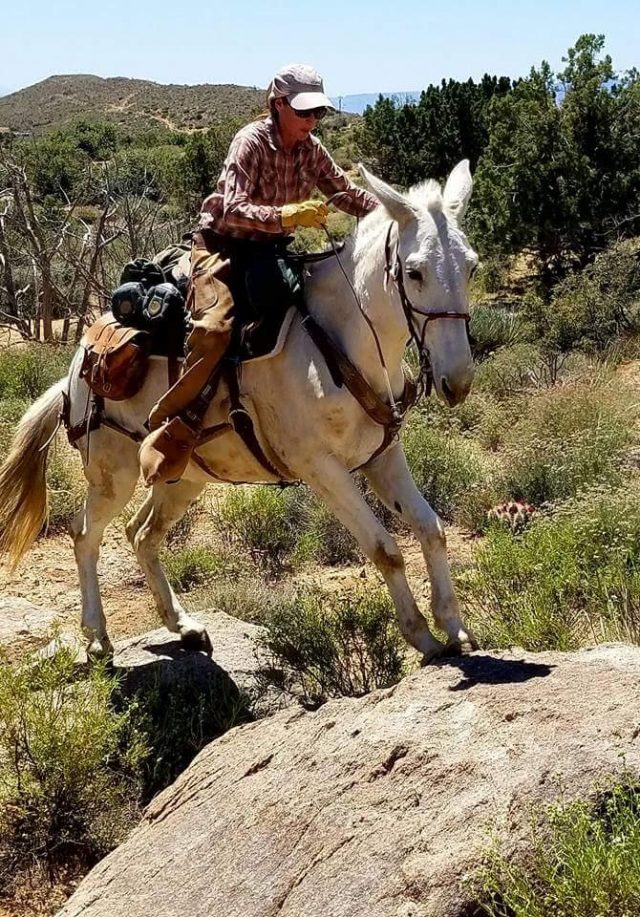 Get a mule, they said… 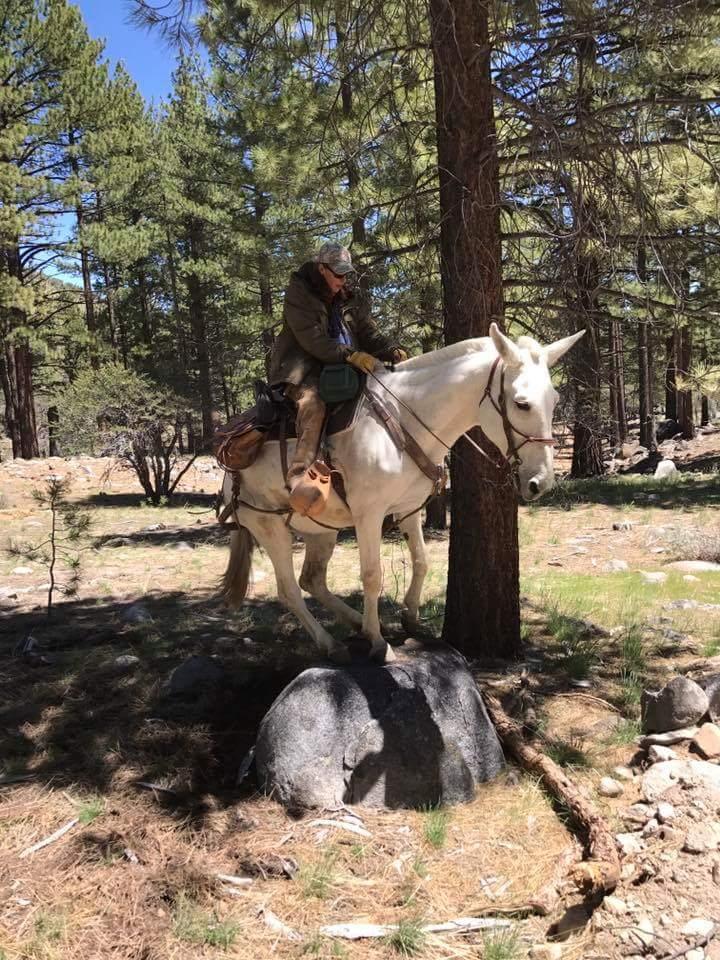 They’re so sure-footed, they said…

I have a mule: his name is Smokey Joe and he’s a klutz.

He’s very surefooted when he wants to be — “wants” is the key word. Yes, he can climb mountains, navigate narrow trails and rock hop without taking a wrong step or missing a beat, but on flat ground he trips over his own four feet. See, he has an insatiable appetite. I really should have named him “Hoover”: not after the president, after the vacuum.

His whole goal in life is to eat as much as possible as long as possible. He’s constantly looking for grass on the trail (which is few and far between out here in the desert). If he’s not looking for something to eat, he’s daydreaming about eating and not looking where he’s going.

He’s fallen flat on his face a couple times with me from not paying attention on a flat, wide trail. But, take him over a cliff and it’s like riding a mountain goat. 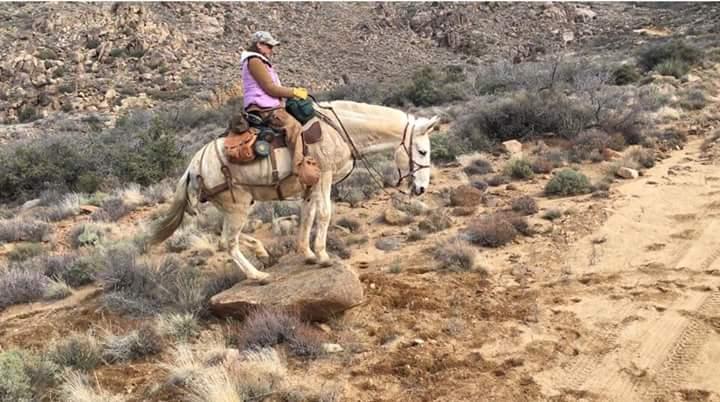 This past weekend as we’re hopping off a rock, he spots a sprig of grass on the way down and halfway through flight, slam dunks the grass straight into his mouth before landing. I think he’d make Shaq blush with moves like that.

He’s so bad, when I’m riding and reach into my saddle bags for a water or snack he stops and turns his head wanting a bite. (Okay, maybe he’s a little spoiled). Most horses and mules are afraid of things that crackle and crinkle (like plastic water bottles, plastic bags and wrappers). Not Smokey — that could be the noise of something edible. 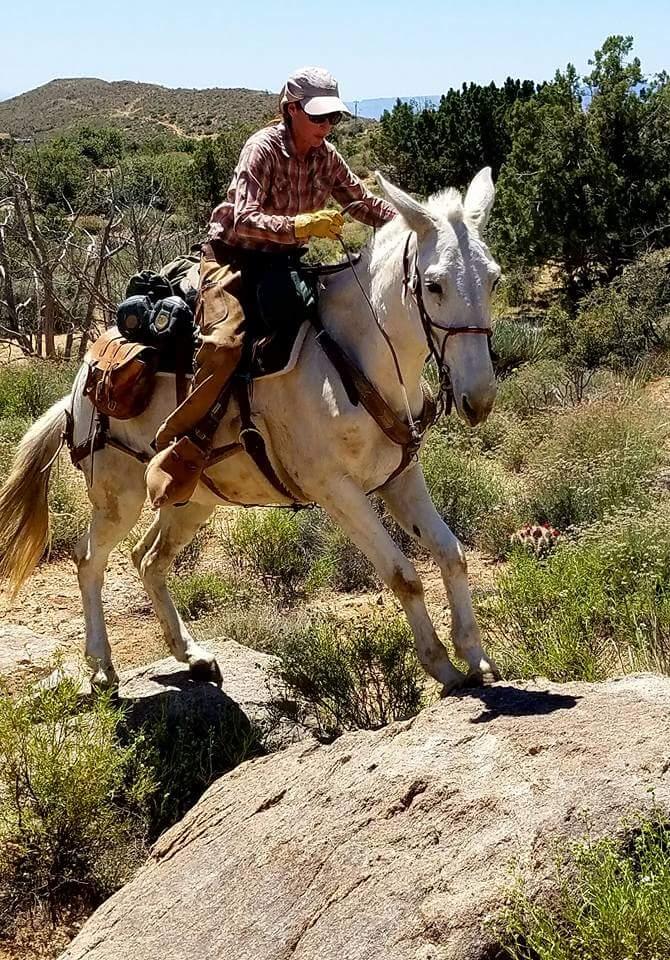 Heading home from our camp spot this past weekend, I pull our big living quarters trailer into the gas station so I can fuel up on coffee. I make sure both mules are okay in the back of the trailer. I head in for my liquid caffeine fix and on the way out I see my boyfriend standing outside the trailer with the mules.

I run over asking “are they okay? Are they colicking?” Terry replies back “I went into the trailer to get an iced tea and all of a sudden I hear this thud and some grunting. I run out and see that Smokey Joe has fallen and slid under Betty Boop [our other mule]. I unloaded her to get him up and out. Maybe he had a seizure… why else would he fall like that?”

I look at Smokey and he looks totally fine, like nothing has happened. I knew exactly what happened though: he dropped some hay out of his manger and put his head down to get it and lost his balance. Of course that’s what it was, because he’s fallen in the trailer before for the same exact reason. And if he was really shaken up by his fall, he’d be reluctant to get back in, but he basically pulled me and himself right back in because he has some unfinished business to attend to… his hay. 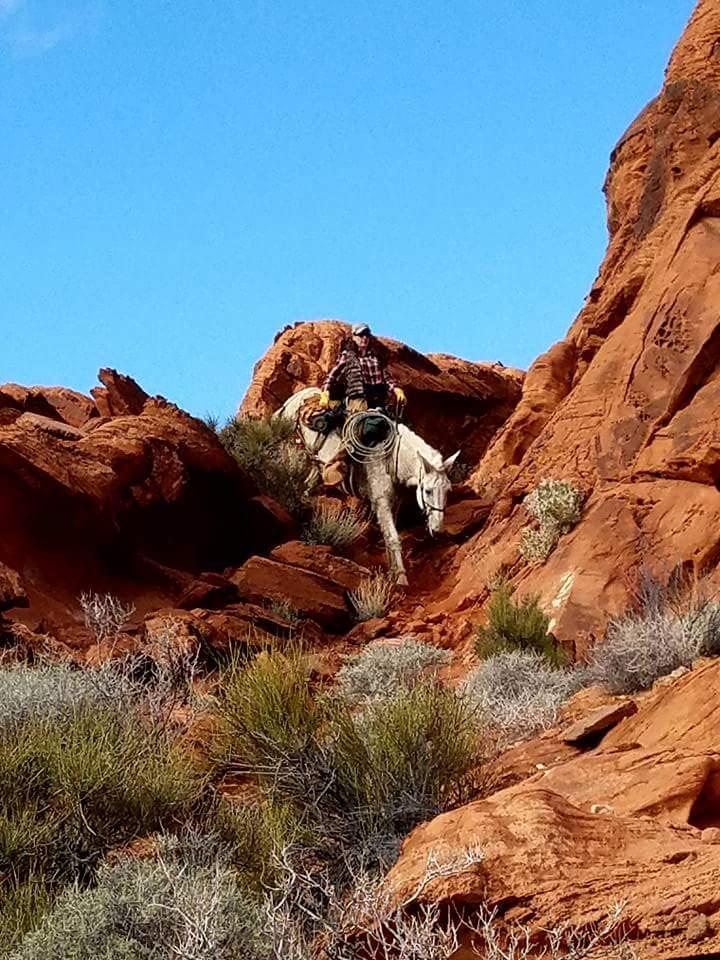 If I ever end up dead or missing I can almost promise you, it’s because my mule wasn’t paying attention to his surroundings, was too busy trying to eat and ended up falling to his death and taking me with him.

Get a mule they said…