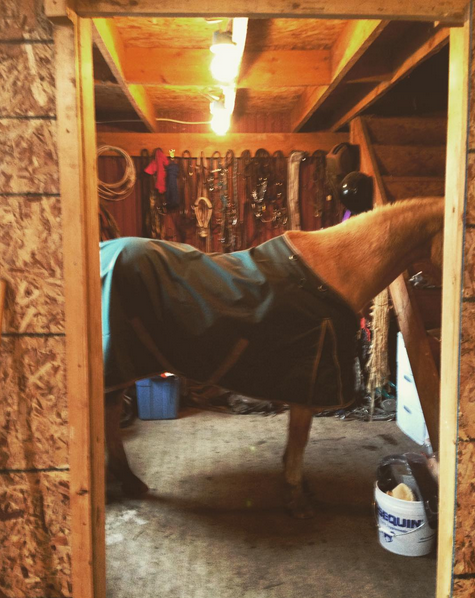 If there’s an actual loose horse in there, we’re not sure we can help you. Photo by Kristen Kovatch.

You can tell a lot about someone by how they keep their tack room. (Tongue-in-cheek, of course — take this with a grain of salt.)

1. Super organized, so clean you could eat off the floors.

This person is a little OCD about things. She likes things perfectly clean and organized or she will lose sleep at night. She’s a highly motivated person that works a corporate job, drives a nice car and has a designer dog named “Chanel.”

She is very picky about a lot of things, especially her soy venti decaf latte at Starbucks that she only wants Joshua the barista to make for her, because he’s the only one who takes the time to spell her name correctly: “Jenni with an I.”

2. Slightly messy with a porti-potty in the corner.

This person is highly practical. After all, you never know when you’ll have to use the bathroom. Not only does he have a porti-potty, he also has baby wipes since the tack room has no running water. The tack room looks like a bomb went off it in, but he knows exactly where everything is and never loses a thing.

He works a regular 9-5 desk job, but his real calling in life is to write poetry and rescue animals. He prefers to wear plaid flannel shirts and is growing a beard… so that people take him more seriously. He still lives at home with his parents (in the basement).

He likes to eat all organic and wouldn’t shop at Walmart if his life depended on it. He can make a camp fire from two sticks, a skill he learned from Boy Scouts.

His Tinder profile says “poetic animal lover looking for equestrian soul mate that has her own house.”

3. Trailer that doubles as tack room.

This person doesn’t care if she even has a pot to piss in, because she knows she’ll always have horses even if she was homeless. She works two jobs that she hates and trains for other people on the weekends so her horses can have a better life. She’s a tough broad. Vets and farriers are slightly afraid of her and breathe a sign of relief when she has to cancel an appointment. She likes to drink whiskey and get in bar fights because in her mind it keeps her on her toes since she works with big, reactive animals on a regular basis.

This person is still relatively new to horses and it shows since she has only enough tack that it fits with room to spare in her tack locker. She’s still in school and spends her nights and weekends at the barn. She’s so new to horses, she hasn’t even broken any bones yet and recommends Craigslist to everyone to find their dream horse, since she lucked out with the first horse she found on there.

She still has time and the motivation to wash her horse’s mane and tail weekly and loves to apply glitter on his hooves. She’s a great student and likes to volunteer at the local shelter on the weekends. Pumpkin spice is her favorite flavor and she wears her Uggs all winter long, unless she’s horseback riding.

This person keeps his horses at home. He has the shed all wired so it will be heated in the winter and cool in the summer. His saddles are all kept organized and oiled and he sweeps out the tuff-shed every time he’s done riding. He has two cattle dogs, one named Kippy and one named Pepper. He wears suspenders instead of a belt. He and his wife have been married for 25 years and he has five grandkids that like to ride. He even bought them a pony for Christmas that he keeps on his property. He’s retired and reads the Sunday paper, drinks his coffee black and still doesn’t know what Facebook and Snapchat are.

6. A combination of all of these.

This equestrian totally strips and deep-cleans the tack room about twice a year and promises every time that this is the day they’ll start keeping it clean with all the tack properly conditioned and oiled. Six months later, the tack room will be a bit of a hot mess but this equestrian will still be able to find everything, somehow.

They’re basically the same in real life: every six months they vow to keep their car clean, their house clean and maybe even decorated. They’ve got great intentions and just keep getting distracted. But their horses are happy and healthy even if their owner is always just slightly falling apart.