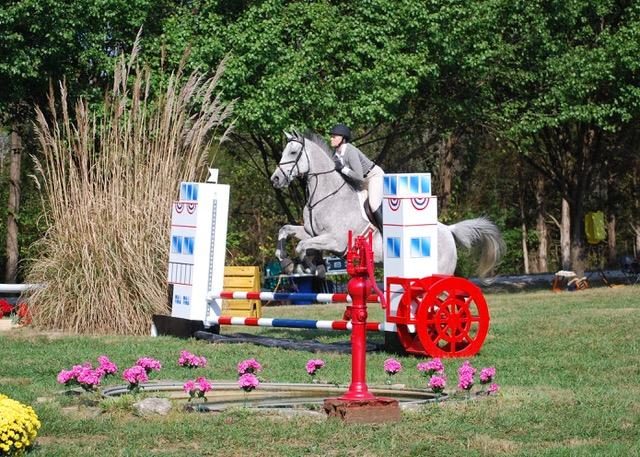 It takes real courage not only to face your biggest fears, but to admit when you simply aren’t ready. Meagan DeLisle found both kinds of courage at last weekend’s George Morris clinic. Her recap concludes today with Part II.

While my clinic experience with the legendary George Morris hadn’t quite gone according to plan thus far, I woke up on day two bound and determined to redeem myself. That is, until I got out of bed that morning and felt like sixty years had been tacked on to my age. How I was going to finish out the remainder of the clinic I wasn’t sure, but I popped some Aleve and gave myself a motivational pep talk in the mirror while I tended to my stitches.

Again our day began with the course build and to my surprise, George sought me out first thing to check on how I was feeling. We made a few jokes again at Wayne’s expense (poor fella wasn’t even at the clinic to defend himself, but I think he has accustomed to his role of token clueless horse show husband by now) and I instantly felt my spirits lift.

When our session started, George pulled me out in front of the group and used me as his example. He taught us how to properly fold our stirrups over for stirrupless work and then sent us out on the track to begin our torture. The majority of our work was done in the sitting trot and sitting canter, but that didn’t alleviate the burn. After about 30 minutes of consistent work, every muscle fiber in my body was screaming for a break but I forced myself to stay strong and persevere. South was feeling his Wheaties that morning and while I struggled to keep our composure at the canter, I felt confident in our performance.

“Meagan,” George boasted over the intercom. “I’ll take your horse.”

I watched as George swiftly mounted South sans stirrups and began demonstrating haunches in and out and how to teach your horse to accept your leg. South was NOT a happy camper with this exercise and quickly grew sassier with each step. As he tossed in a few fussy movements and exaggerated kicks, I prayed that my horse wouldn’t be the horse to unseat George — but in true George fashion he never lost his finesse, even without irons. 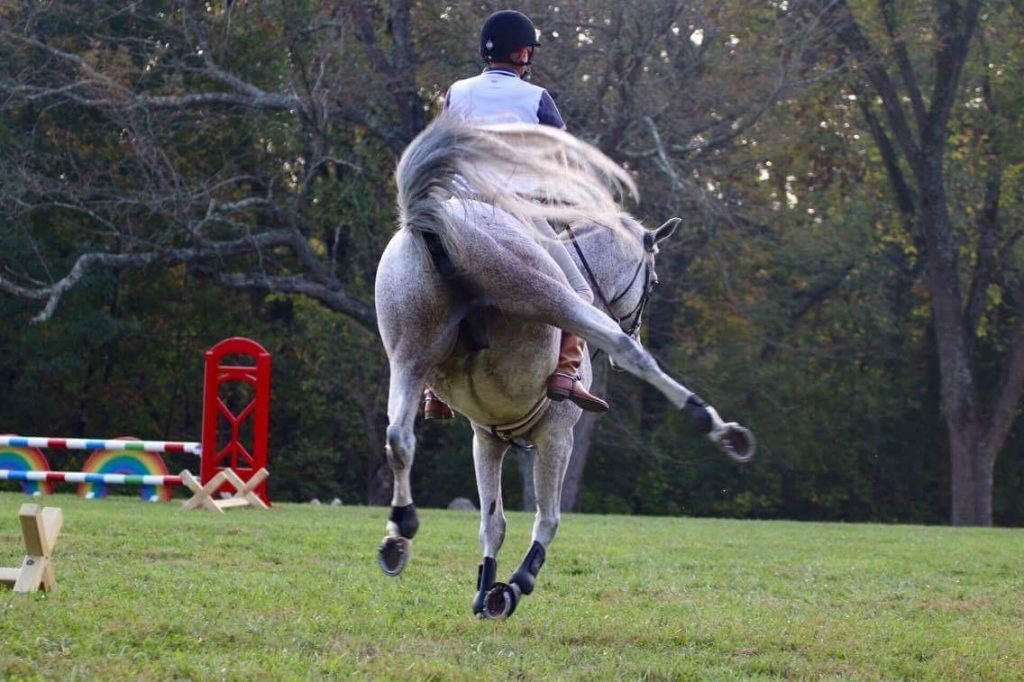 After George was satisfied with South’s acceptance of the leg, it was time to mount back up and regain our stirrups for the jumping portion of the clinic — because, you know, we weren’t exhausted enough already.

Thankfully, I did not have a repeat of the day before despite the fact that I had quite a bit more horse on Saturday than I had on Friday. Our courses were similar to the day before, just moved around the field a bit and we focused on selecting distances and sticking to them. 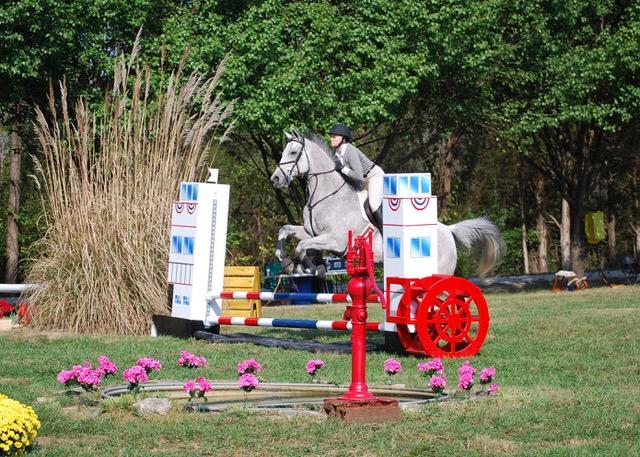 At the end of our session, George went around our group and chatted with us a bit about our day. “Meagan, do you feel you were properly prepared for this clinic?” He asked giving me the typical George look. I shook my head, I knew I wasn’t. I knew I had rushed into this for the opportunity.

I expected the tongue lashing of a lifetime, but George surprised me and everyone else in the crowd. “Be careful entering clinics, people. Clinics are meant to be testing. You do not want to be unprepared for a clinic because that can lead to unsafe situations. Meagan, you will get there. You just need 50 more hours in the saddle and you will be there.”

Throughout the remainder of the day I became aware that George was treating me differently than some of the other riders in the clinic. I began to question why he was being so kind to me and I am still not sure that I will ever have that answer. As the day drew to a close, I hopped in line for the book signing with my well loved copy of Unrelenting. 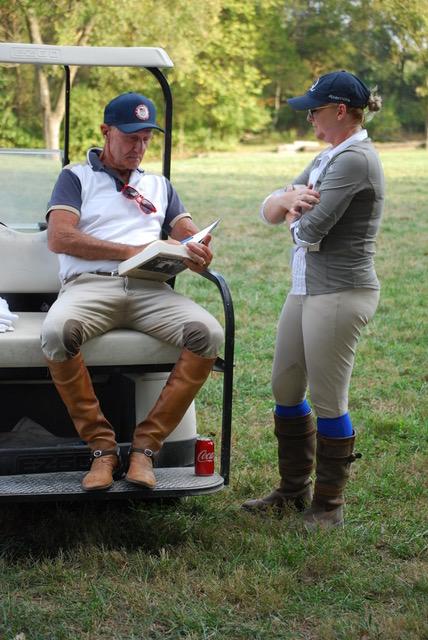 “This book doesn’t have much technical riding information in it,” he said as he opened the book up to the title page. I promptly informed him that my copy of Hunter Seat Equitation was equally as well read and his smile widened. After a quick scribble in my book, he glanced up at me and said, “You are a nice girl, Meagan. You will get there. I know you will. You need more time. You need more work on your leg, but you will get there.”

I waited until I was out of his sight to open up my book and see what he wrote and immediately felt a smile spread across my face. 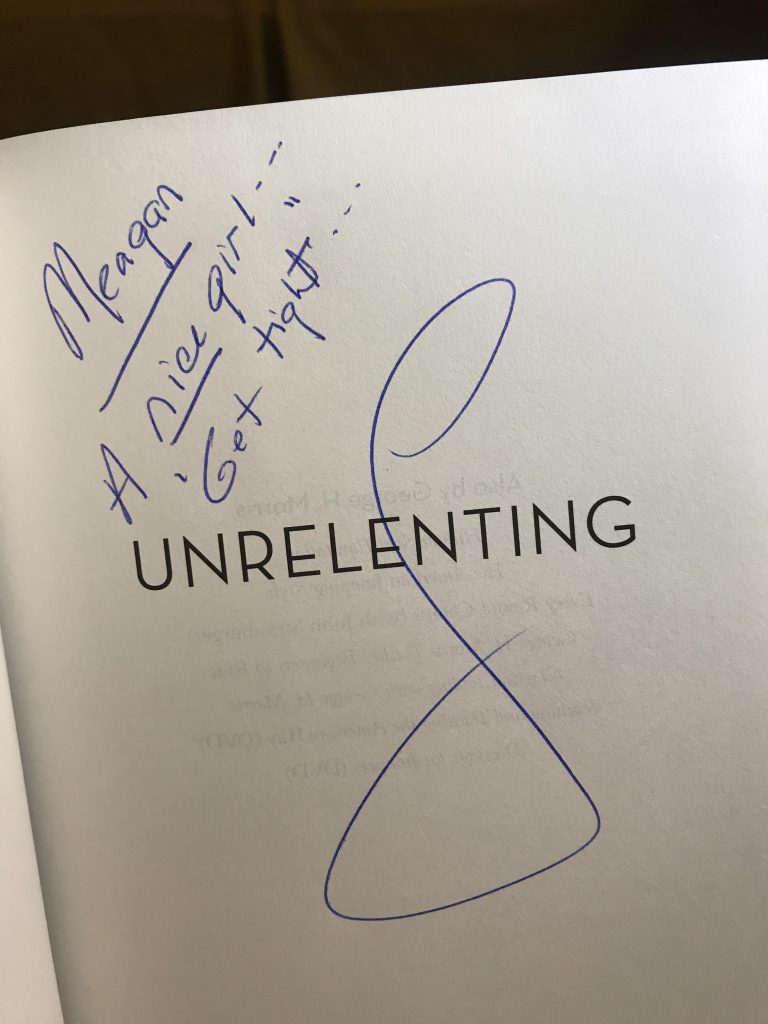 My body was near its breaking point by Sunday, as you can imagine. My fall coupled with the intensity of our riding each day had definitely taken its toll. I made a mental note to work on my endurance and physical fitness as homework and limped around the hotel room as I got ready that morning.

The Horse Gods decided it was time to play a new card that morning by dropping the temperature from a pleasant 80 degrees to a sharp and drizzly 62. I felt my stomach knot up recalling how strong South had been the day before and knowing that this temperature drop would not help. Our course build was accompanied by on again off again rain droplets, but it wasn’t the rain that had me nervous.

George had us set up a two verticals just two strides apart, two strides out from a bank much larger than anything I had ever ridden before.

So I did what every rider is never supposed to do — I got in my head. I told myself there was no way I could handle that bank and before I had even mounted up, I had already counted myself out for the day.

Our flat work left me weary, but I tried my best to work with South and keep him happy throughout the day. All of the horses were a bit fresh, despite three days of hard work. With every walk, trot, or canter step I knew we were one step closer to tackling that bank and my mind was screaming, “NO THANK YOU.” As we made our way over to the bank, I said a quick prayer that I would come out unscathed.

I purposely waited to be at the end of the pack and watched my fellow clinicians navigate the bank to the small verticals two strides away. It’s just a bounce, I told myself. Just like a gymnastic at home, only steeper and scarier and overall more impossible. 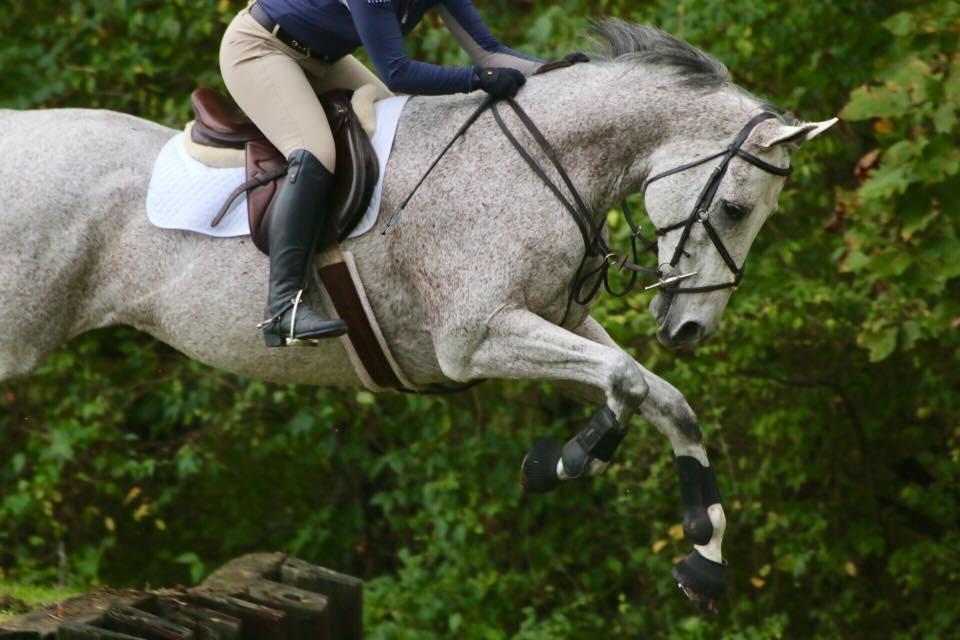 I like to believe the photographer cut me out of this photo due to the look of pure terror that was probably plastered on my face. Photo by Jennifer Kaiser

Somehow, we made it up and down the little course a few times, although I will be the first to admit it wasn’t pretty. Finally, my mind conquered my body and on a trip down the bank South let out a few little hops and baby bucks and we parted ways. I decided to just chill there on the ground for a while as I caught my breath and came to the realization that now I was not only the girl who got stitches during a GHM clinic, but now I was the girl who came off twice. Perfect. 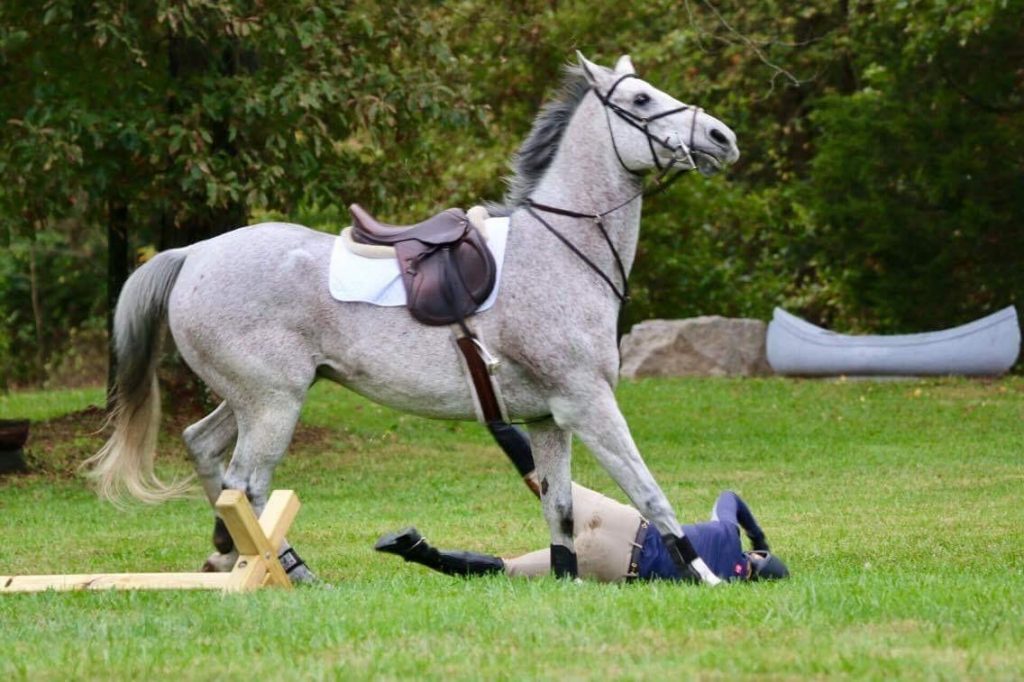 The photographer captioned this one as “Oh no not again,” which I felt was appropriate. Photo by Anne Barry Weber 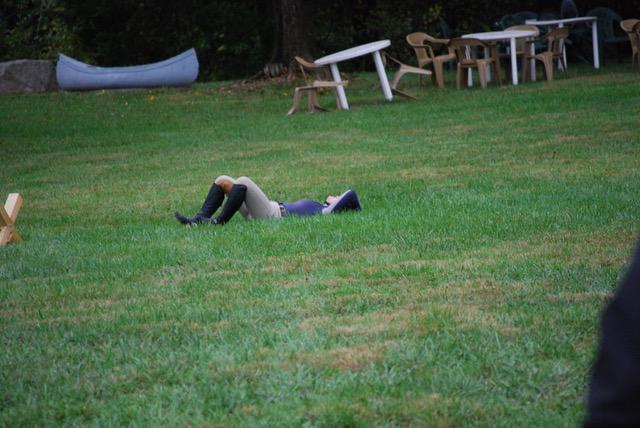 I think I will just lay here for a while and wallow in my own shame. Photo by Anne Barry Weber

Tears. So Many Tears.

I rolled myself up off the ground and stood and George waved me his way. “Meagan. Meagan. Meagan,” he said into the microphone around his ear. “Meagan is a sweet girl. You were not ready. What were you thinking entering this clinic if you weren’t ready?” I was so ashamed, I didn’t know what to say. I thought I was ready, but it had become apparent over the weekend that I probably wasn’t. I was about 50% there. I thought I knew what I was doing, but I needed more finesse, more time to develop myself. 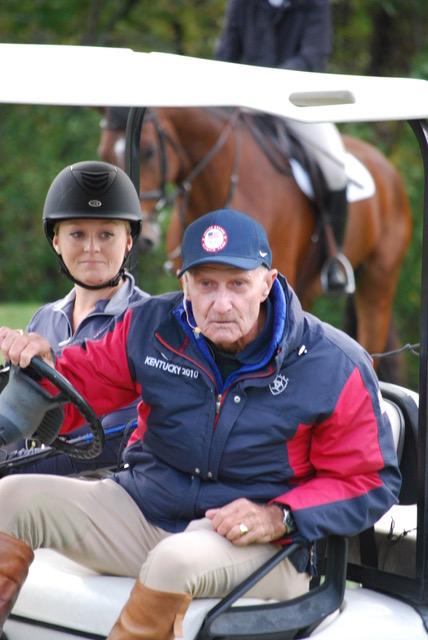 Just chilling with George. Here he was telling spectators that we had made him rich by purchasing his books and using them as coffee table ornaments rather than actually reading them and learning from them. Notice the smile I am trying to suppress in the background. Photo by Jennifer Kaiser

Of course, I won’t lie — I didn’t mind riding with George one bit. In fact, I think it’s safe to say I had the best seat in the house. I got a first hand look at what George was seeing and I think I learned so much more that way than I would have had I continued to struggle through the rest of the day. Of course, my heart was hurt because I felt I had let myself and George down, but in a way I knew this was for the best.

My group came to a close and I cleaned South up for the final time. After auditing the 3’6” group we broke for lunch and it was time for Cassie and I to head home. I thanked Brody and Jen Robertson for being such gracious hosts and made my way over to George. I wasn’t sure what to say, so I just blubbered a big thank you and even apologized for not being fully prepared upon entering and watched as that closed mouth smile spread across his face.

“You will get there, Meagan. You will. You just have to keep working. I will be back next year and so will you.”

So here I am — alive, with a few bumps and bruises and stitches, but alive. I am a different person because of this opportunity and because of my idol. So many people prepared me for what to expect. Told me George was going to tear me apart and make me cry and you know what — they were right, but they were also wrong.

George tore me apart and built me back up. He broke down everything I thought I knew and he started the building blocks of a new me. And as I drove away from Altamonte and a weekend with my idol, I did cry. I cried because my dream came true, I cried because I was braver than I had ever been before, and I cried because my idol believed in me.

Now — to be the best me that I can be. See you next year, George.