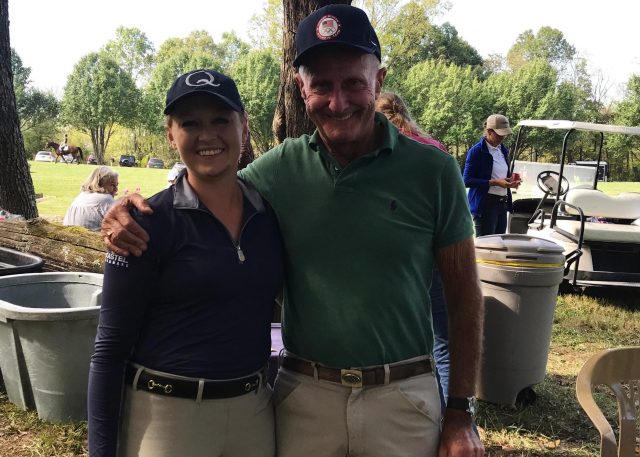 In Part I of a two-part adventure, Meagan DeLisle shares her roller-coaster George Morris clinic experience. Pros: she earned a “beautiful!” from George. Cons: she also went to Urgent Care.

As I drove to St. Louis on Thursday afternoon I was filled with excitement and nausea — my life-long dream of riding with George Morris was finally coming true. Part of me wanted to sing to the high heavens while the other part of me wanted to run away and hide for a few months. With only three weeks to prepare, I knew I was going in as a bit of a wild card (read about my preparation here and here). With a car packed full of tack and many outfit options, I left the comfort of my home barn in pursuit of a life-changing experience. I had no clue just how true that would be.

The Man, The Myth, The Legend

After a nice flatwork session on Thursday afternoon, I arrived at Altamonte Show Stables early Friday morning to give my mount Point South the grooming of a lifetime. My coach Cassie Zimmerman and I beat the sun and all of the other riders to the barn that morning and I took those few peaceful moments to my advantage to just “zen out” and come to terms with the reality I would soon face. We had to meet George down in the jump field an hour prior to the scheduled start for my 3′ group for the course build. I was about to be face to face with my biggest idol. I won’t lie, I’m like border-line creepily in love with George Morris. I had dreamt of this day for so many years and knowing it was about to become real life was almost too much for my little heart to handle.

The other riders began drifting in to feed and groom their mounts. I cannot tell you how welcoming the atmosphere was at the clinic. Each rider was so friendly and kind. We chatted like we were old friends, all of us trying to tone down the level of our nerves before the day began. One rider, Morgan McAllister, and her mother took time out of their busy morning to teach me how to place studs in South’s shoes and make sure my tack was George-ready. I can never thank each of the riders, spectators, and Altamonte farm family for all that they did for me this weekend.

Finally, it was time. My heart was jumping up in my throat. We walked to the field and waited as I stared at the grass blades and dew that covered my once perfectly polished boots. “Are you ready?” asked Mackenzie Altheimer, the sweetest Junior rider that I have previously had the pleasure of interviewing for Jumper Nation last year, as a large white diesel pulled over on the side of the field. The passenger door swung open and out popped George. 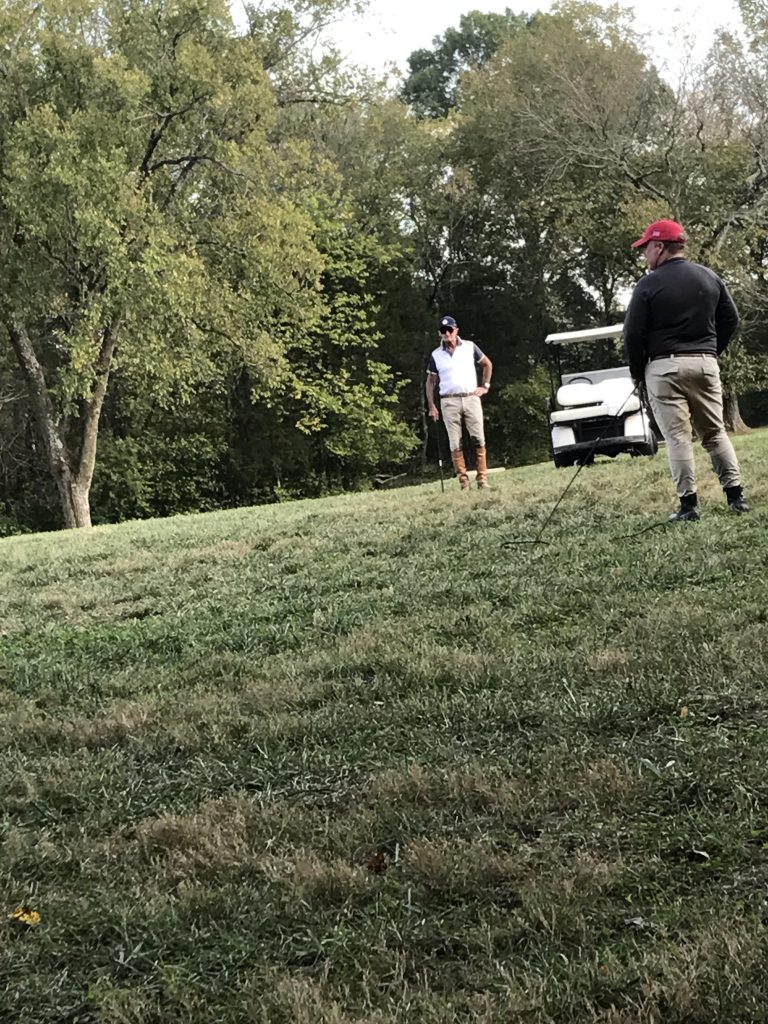 George, the overseer of all things. Photo by Meagan DeLisle

He was all business. No time was wasted: we immediately launched into building courses. He was meticulous and prepared, he knew what he wanted and expected nothing but the best from us. We got to work hauling around heavy standards and brightly colored poles all around the field to complete his vision for the day. As we constructed a few of the fences, I felt my heart sink to my stomach — some of the questions were so technical that I wondered if I was going to be able to hold my own. But there was no time for self doubt; there was work to be done.

The first group was dismissed to tack up our horses with strict orders as to what time to arrive back down at the field. My fingers rattled as I tucked each piece of leather into its keeper. This was it. A quick polish of my boots after I mounted and Cassie sent me on my way with instructions to have fun and try hard — easier said than done!

We hacked around the field allowing our mounts to adjust to their new surroundings as we waited for George’s instruction. Seeing him on the back of that golf cart in his 2010 Ariat Olympic jacket was too real for words: I was really on a horse in front of THE GEORGE MORRIS. That is when it hit me, my nerves were gone. I was in the saddle, my happy place, and despite the fact that I was riding in front of the one person I idolized more than anyone else, I was calm. He called for us to line up in front of him and we went around introducing ourselves. Then it was time for the work to begin.

I cannot stress to you how important being physically fit is for these clinics. Don’t get me wrong, I am not grossly out of shape but I was definitely not in shape enough for what was I was in store for. We launched straight into 45 minutes of flat work. Trotting, cantering, galloping, half seat, full seat — you name it, we were doing it. We even performed some shoulder in work to which I received a “Thereeee, Meagan’s got it!” from George. I hid the smile which desperately wanted to bloom across my face, keeping in mind the fact that Jen Robertson told me that George would eat me for lunch if my naturally smiley nature carried over into the clinic. 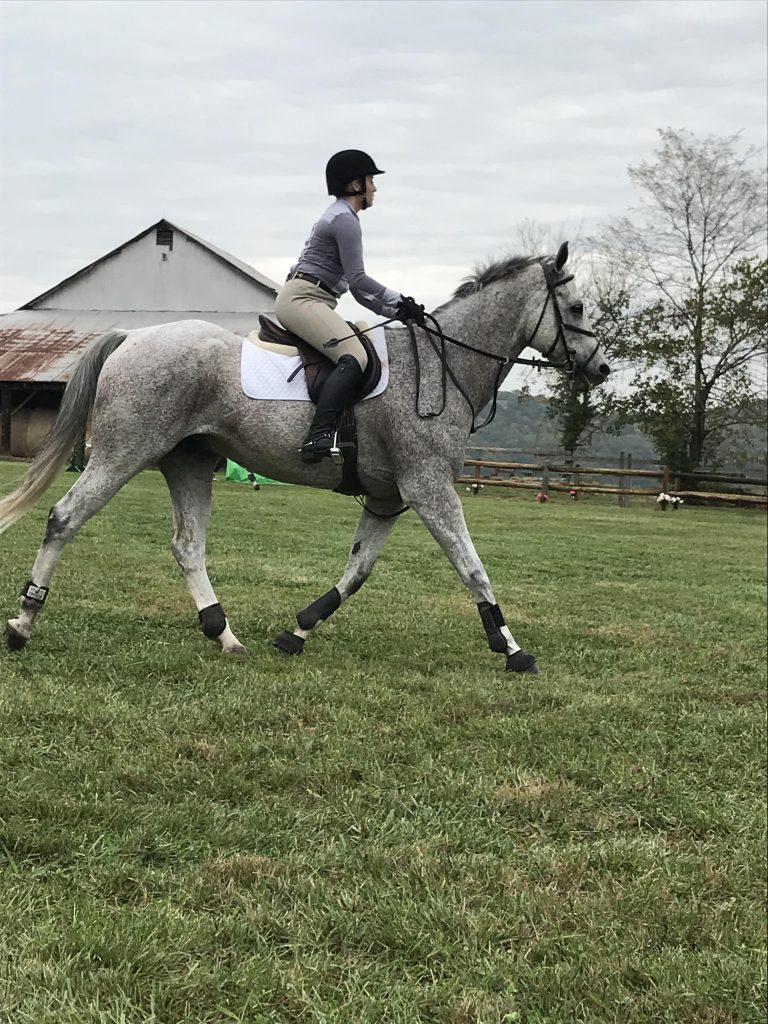 We launched immediately into over fences work and despite being absolutely exhausted, I was excited. We started by trotting over a small log and then began working on a bank jump that was super fun to jump. South was in his element and was going around like a champ. We worked on my heel, which George would later tell me was “alright” (after he berated two of my fellow riders for their heels, an “alright” to me felt like a gold medal) and continued on. I even received a much sought-after “beautiful” from George after demonstrating a stop on a perfectly straight line out of a single fence. Our focus shifted from the bank to a triple combination with a sharp left turn to a small liverpool. While I by far wasn’t the best rider there, I was ecstatic feeling like I was holding my own amongst fellow riders with extraordinary horses and a lengthy resume of accomplishments. I felt like I was on top of the world. 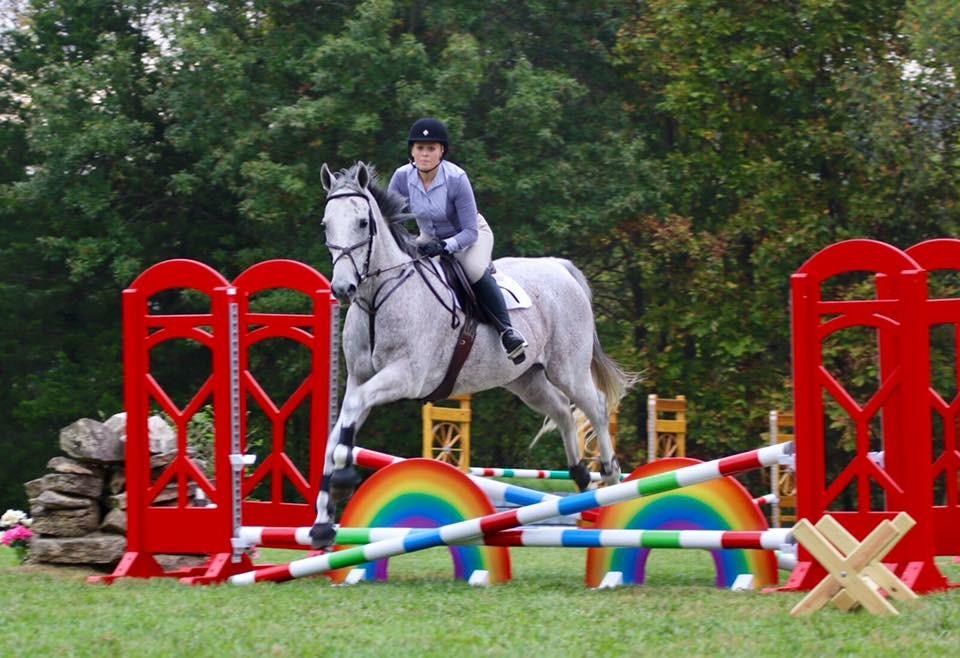 Note to self — NEVER EVER get too confident. As we rode around I felt great mentally, but physically I was fatigued. Our last line of the day was to be the rainbow triple combo to the liverpool again, bumped up just a hair but nothing too large. South’s approach to the triple was great. We got in a hair long to the first, but gathered back up by the second. I can’t tell you what happened at the third: all I can tell you was one minute I was on the horse and the next minute I wasn’t. 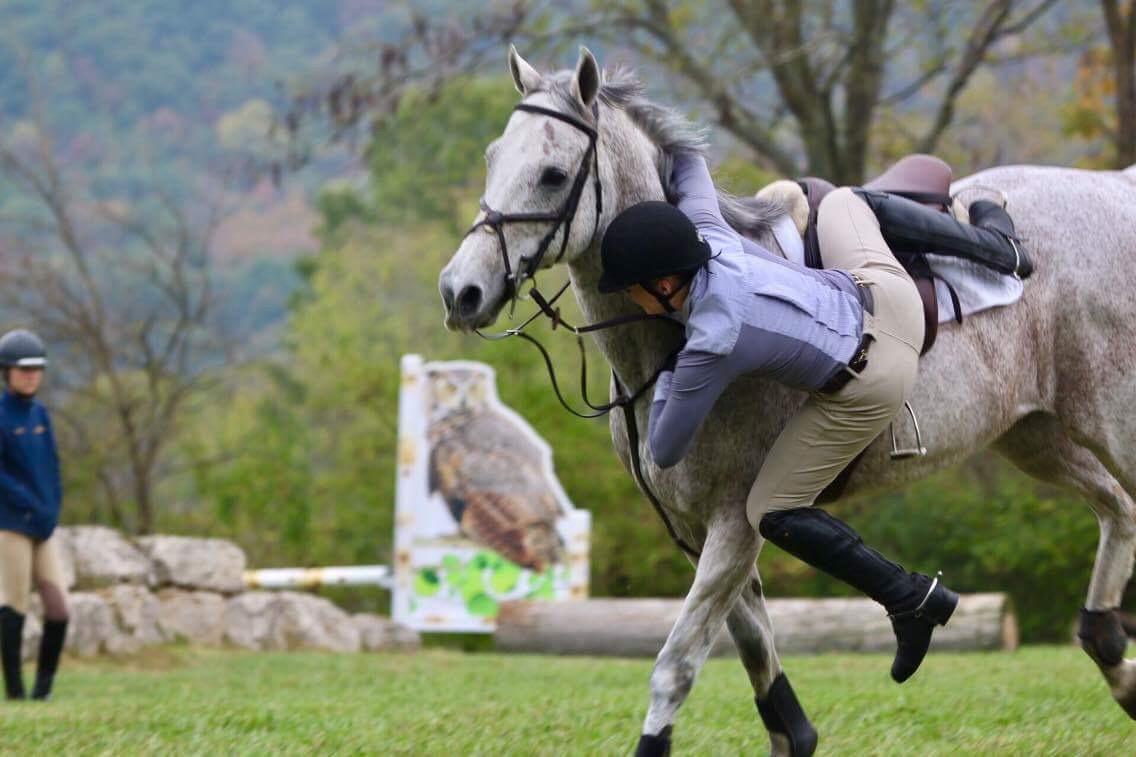 Anndddd down I go. Photo by Jennifer Kaiser

I lay on the ground in disarray. Did I seriously just fall off on the last line of the first day of the George Morris clinic? WHY ME? I went to lift myself up, only to be pushed back down by a crowd of people that had surrounded me, including George.

“Can she get back on or is she too bloody?” he asked.

Bloody? I’m not bloody, I thought. “I can get back on!” I said as the world stopped turning. 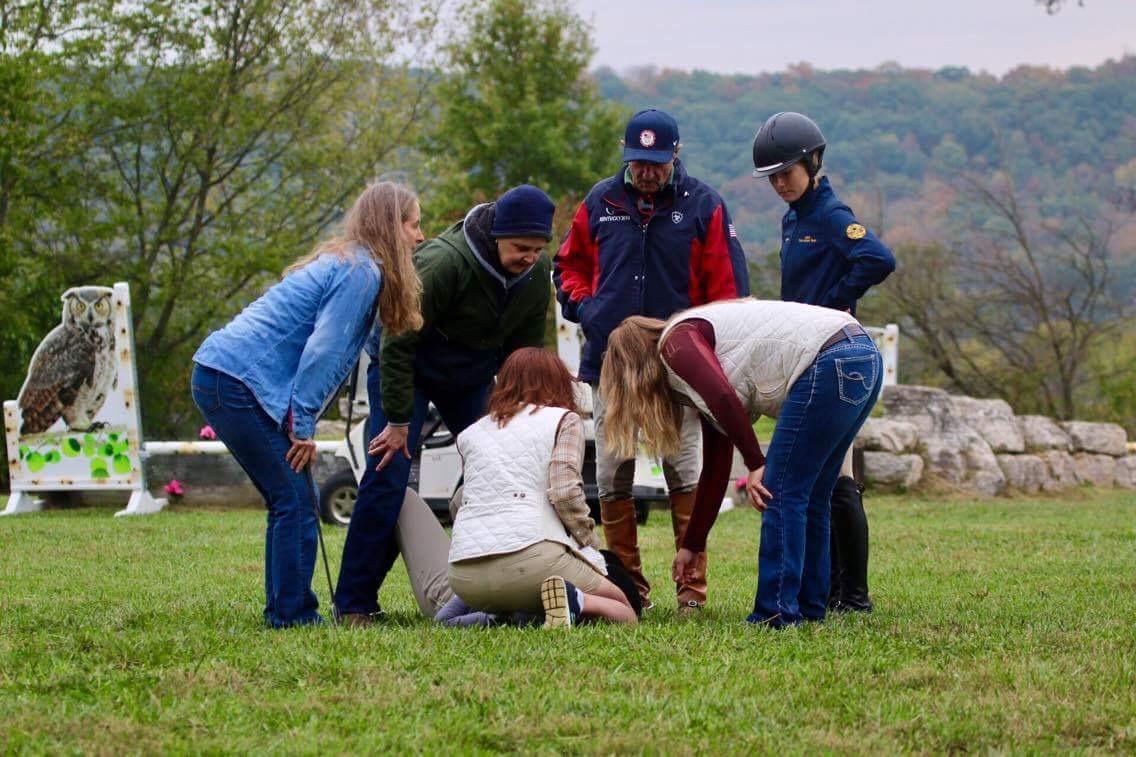 Amongst that sea of bodies somewhere is a dazed Meagan….photo by Jennifer Kaiser

“No. Nope. She cannot get back on, she needs stitches,” said a new voice behind me.

STITCHES? I was beyond confused. I had simply fallen off, how the heck did I need stitches? A wad of napkins was placed against my chin and two people helped me stand. Jen relayed directions to the nearest Urgent Care to Cassie as I stared down at my new Le Fash show shirt that was now covered in blood. I couldn’t piece together what had happened, nothing hurt other than the general sore feeling you have after hitting the ground. I didn’t have a headache and I wasn’t dizzy so I knew I didn’t have a concussion. I felt completely fine, but I could tell by the horrified look on the faces of the spectators faces that I wasn’t just fine.

George grabbed my shoulder, “You go get your stitches and come back to ride tomorrow, okay?” 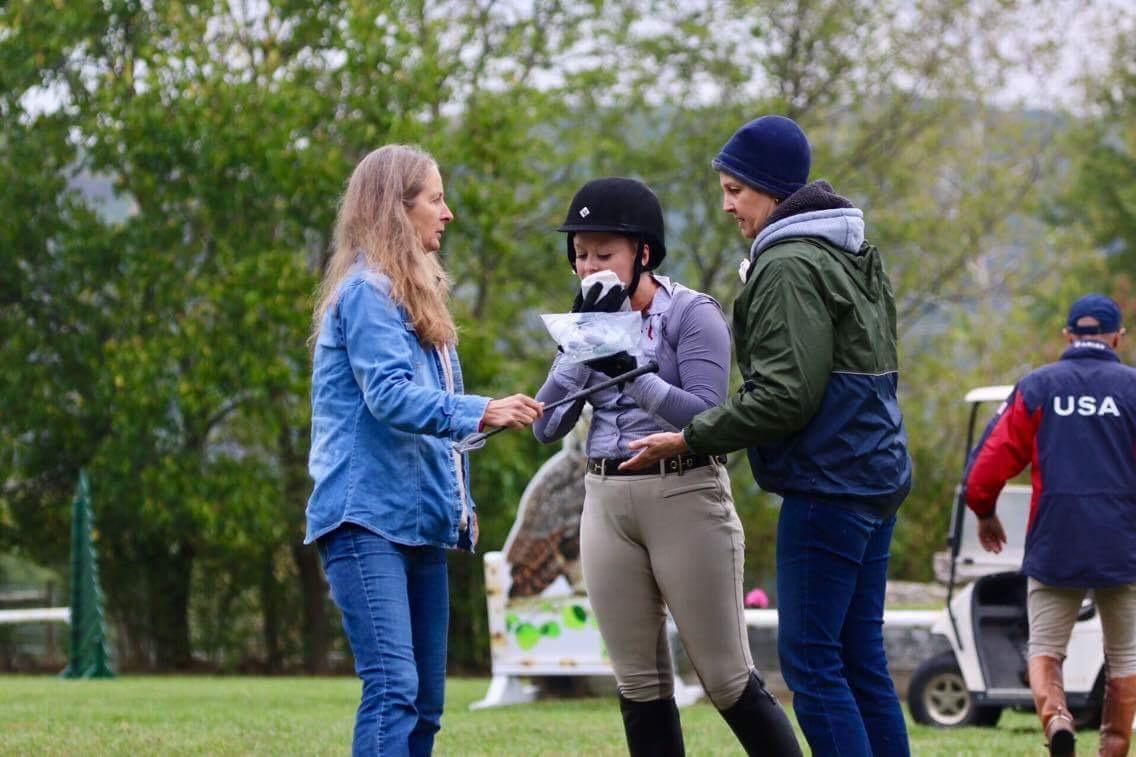 Blood all over my new shirt…..Photo by Jennifer Kaiser

After a quick trip to the Urgent Care and six perfectly placed stitches later, I was able to watch the video of my fall and realized just how scary it was. I came unseated at the last fence and fell underneath South. His back hoof hit my helmet and slid down, the stud catching just below my chin on my jawline which resulted in a tear larger than a quarter. Two inches higher, it would have been my eye; two inches lower, my throat. It was a fall that I will never forget.

In true Meagan fashion, I am no quitter. After a quick stop to the tack shop to pick up a new helmet and a change of clothing so I didn’t look like an extra on a horror flick, we made our way back to the clinic to audit the remainder of the day. Even just auditing a George Morris clinic is such an enlightening experience and I soaked up everything I could like a sponge, in between changing out tissues to wipe off the blood that would occasionally seep through my band-aid. 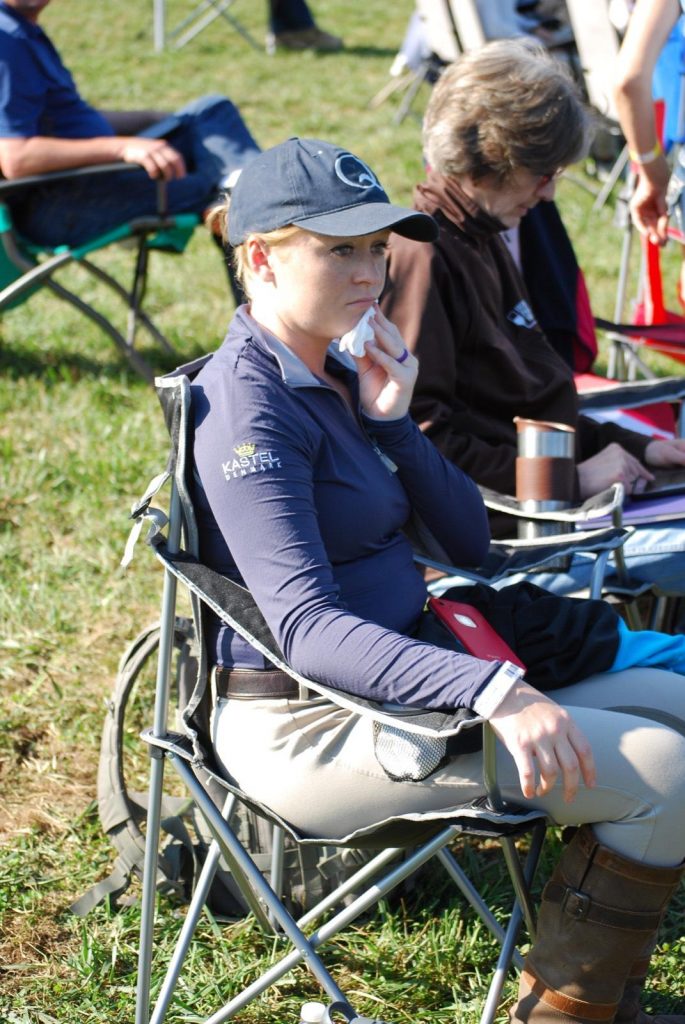 Back at the clinic to audit — hospital band, bleeding stitches and all! Photo by Anne Barry Weber

At lunch, George made his way to me to have a look at my chin. “How is it?” he asked as I proudly showed off my six perfect black sutures.

“It’s fine. Clear to ride tomorrow!” I boasted which brought out a smile on his face.

“And your husband, what did he say?” George questioned.

I grinned. While at the Urgent Care I made two calls, one to my mom who promptly freaked out and told me there was no way I could ride the remainder of the weekend (thankfully Cassie was able to talk her down) and one to Wayne. I thoroughly expected Wayne to declare that we were selling both of my horses and that this was the day I would retire from jumping but instead he simply asked, “Will it leave a scar?” When I told him the doctor said if it did, it would be minimal, he responded with, “You should let it scar. It’s not just any scar, its your George Morris scar!”

George busted out laughing when I shared that story with him and said, “You should’ve told him I hit you!” We joked and chatted a bit and then he didn’t even object when I asked for a photo with him to document the origin of my George Morris scar. With his arm around me, he gave me a quick squeeze. “You are a nice girl, Meagan. A sweet girl.” 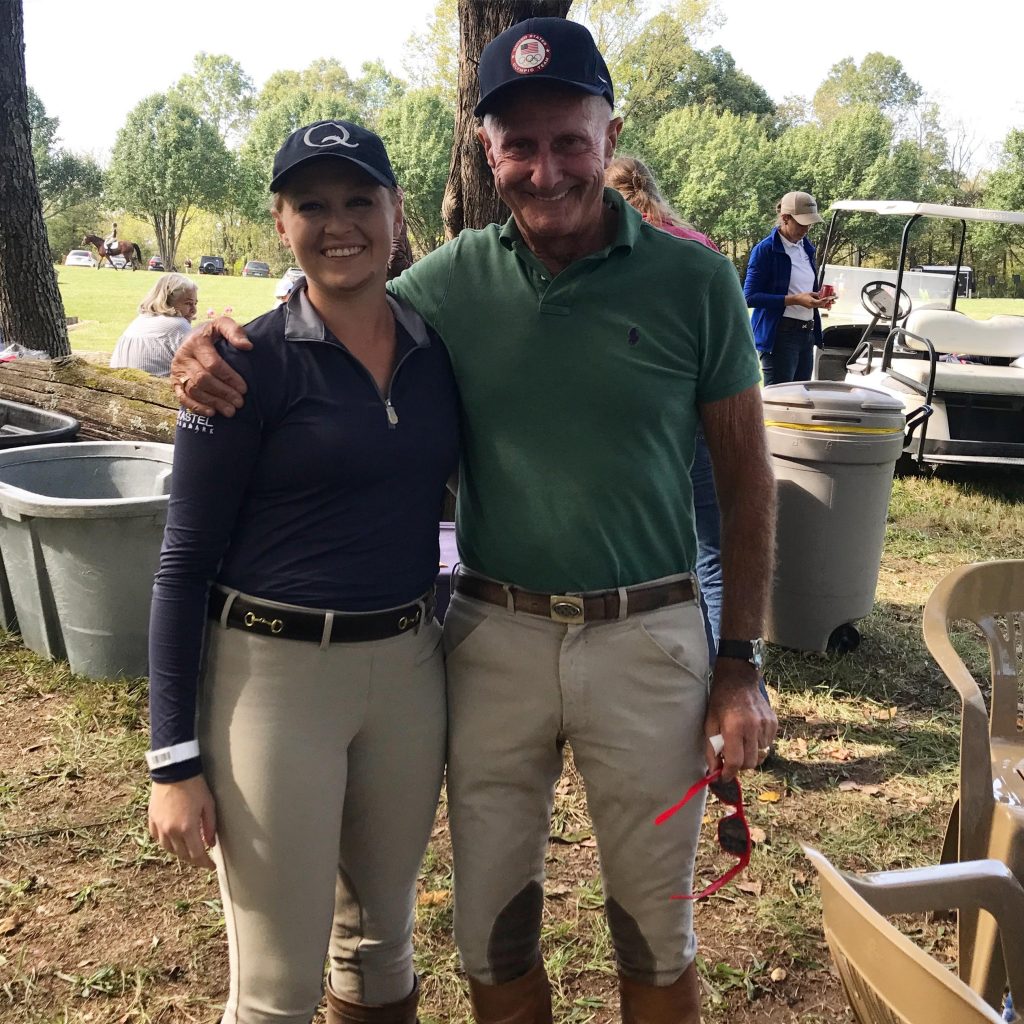 Those words would never, ever leave my mind.

How did the clinic end? Don’t miss Part II!