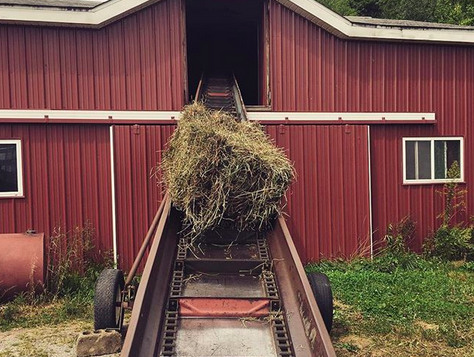 Hay: the necessary evil. Maria Wachter has a few bones to pick with this equestrian staple.

Why can’t horses be like dogs in regard to their diet? It would be nice if we could just throw them some dried kibble twice a day that we bought at Walmart and call it good, but no, horses need hay and lots if it. They have finicky bellies and all that other crap we know about their digestion. Yes, you can feed them hay cubes and/or a complete feed instead of hay, but most of us scoff at this idea because we have been taught that hay is the BEST diet for the majority of horses. In no particular order, this is why I hate feeding hay:

No matter how good the bale looks from the outside, you can still break open a bale and be greeted by that smelly black and white stuff staring you in the face. Yep, another $16 dollar bale is wasted. You’ll be lucky if you can find a hay vendor who will credit you back, you’ll even be more lucky if you can get that hay bale that you busted open back into a grab-able shape so you can actually return it to your hay guy.

No matter what you do or how you dress, inevitably you will end up with some of that hay bale in your pockets, in the crease of your T-shirt and on windy days, in your eyes and teeth. No matter how hard I try, I always feel the need to shower after I get done feeding. After I take my clothes off, I realize pieces of hay also got into places I didn’t know they could get into.

Why are these bales so freaking heavy and why am I so weak? Of course the only way to grab them (if you don’t have a hay hook) is by the baling twine that will definitely feel like you’re trying to carry a 100-pound dead weight holding onto thin strings sharp enough to double as razor blades.

4. The fear of being crushed.

Yep, anyone on a dry lot envies their friends who have their horses on pasture. An average ton of hay in the western states can cost up to and over $300. That’s a lot of money to be shelling out a month that could be used for more important things… like buying more horses.

I always wear long sleeves to feed. The times I decide to risk it and go bare-armed, I always end up looking like I got in a fight with an angry alley cat that needed a bath and doesn’t like water.

Most awkward shape ever. I mean, I can’t actually think of a better shape that they could have, but I do know a 100-pound bale of dried grass in a rectangular shape is not the most ergonomic for trying to tote around.

8. The right alfalfa to grass ratio.

Of course my horses always crave the taste of alfalfa and turn up their nose at grass hay. Unfortunately, if fed a diet of complete alfalfa, they turn into bloated, high energy, sweaty monsters that remind me of a very pregnant lady that that just downed a whole pot of coffee and chased it with two Red Bulls.

Now, if they get fed just grass hay they waste away to frail whippets that would only look good on the cover of Vogue or the catwalk. It’s hard to get the correct alfalfa and grass balance, I’m not a mathematician after all.

Hay attracts a lot of wild animals. Right now I’m inundated with a plethora of cotton tail bunnies and jackrabbits that like to scatter their poo all over the tops of the bales of hay. I try and shake off all the turds, but I’m sure I miss a few. I sure hope my horses like “chocolate truffles.”

Yep, I’m not even allergic to hay and I still end up with red eyes, snot running down my face and sneezing and foaming at the mouth.  I look like I just went through menopause and rabies at the same time.