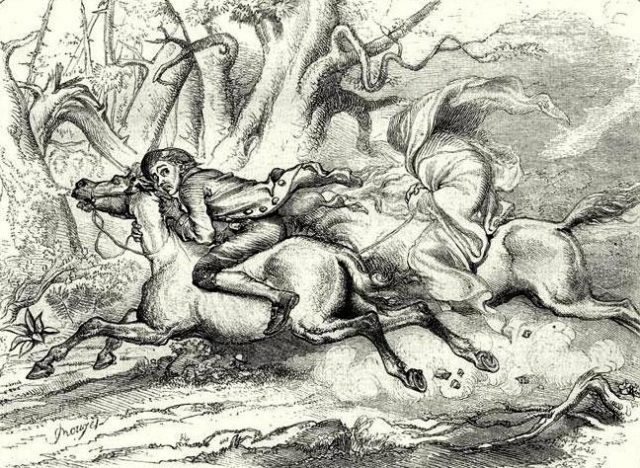 The famous tale of the Headless Horseman, like you’ve never heard it before. Happy October, everyone! 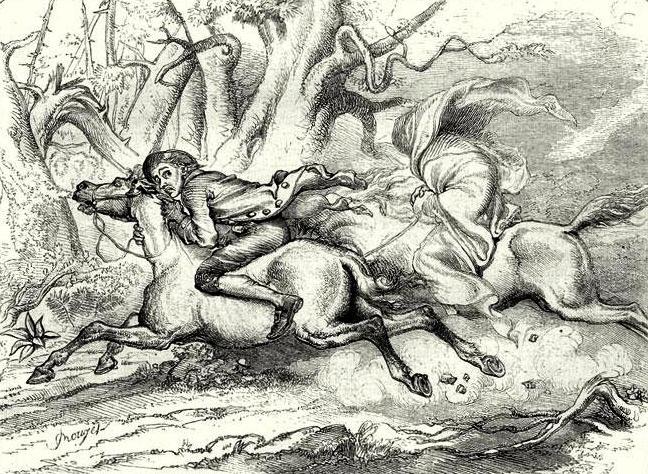 The Legend of Sleepy Hollow by Washington Irving is a classic American Halloween tale: who can forget the eerie tale of the Headless Hessian who wanders the forest on a spectral steed, seeking his head? One thing’s for sure: you’ve never heard this story from the point of view of Gunpowder, the irascible old work horse that Ichabod Crane rides on his ill-fated night.

The animal he bestrode was a broken-down plow-horse, that had outlived almost everything but its viciousness. He was gaunt and shagged, with a ewe neck, and a head like a hammer; his rusty mane and tail were tangled and knotted with burs; one eye had lost its pupil, and was glaring and spectral, but the other had the gleam of a genuine devil in it. Still he must have had fire and mettle in his day, if we may judge from the name he bore of Gunpowder. He had, in fact, been a favorite steed of his master’s, the choleric Van Ripper, who was a furious rider, and had infused, very probably, some of his own spirit into the animal; for, old and broken-down as he looked, there was more of the lurking devil in him than in any young filly in the country.

Ichabod? Oh, you mean the scarecrow? All elbows and knees, he was, bouncing along up there for all he was worth. That guy was good at digging in his heels and yanking on my mouth at the same time while flapping that whip along like he was going to get me to go any faster. Ha! It’s not as though I couldn’t have gone faster, you know. I could have. I could have chucked him right into the ditch and left him there. I could have.

But I didn’t, because I was feeling generous that night. I feel like sometimes people have earned that generosity, you know? It’s in my gift to be so kind. Don’t you forget it. I could run off with anyone, any time I felt like it.

Now Van Tassel, that guy knows how to build a barn. And I was just at the company rail, tied up with the other hacks waiting for whatever sorry party to which I carted the Scarecrow to break up. But that Van Tassel barn! Straw mounded up to my hocks, the softest, leafy hay you ever saw — I could have stayed there all night, except for listening to Daredevil whining, complaining about how that boy Brom of his only ever wants to race and hunt and leap great big ditches, when all Daredevil really wants to do is have his mane brushed and be fed apples right from the orchard. Put a sock in it, Daredevil.

It was a chilly night, as I recall, and the air grew crisp almost before the sun dropped out of the sky. The owls and the bats dropped out of the rafters where they’d been lurking and soared out into the night, and most of us were dozing by then, a nice time to be sleeping with the night settling in around us.

And then the party started to break up, and the people spilled out of the house and into the yard and some into the barn to rouse us from our slumber, drag us back out into the chill and make us carry them home. Daredevil left in a hurry with that boy of his who had his usual smirk on, and one by one the barn emptied out until I was the only horse left. Well, I was okay with that! I propped up a hind hoof and prepared to take another nap, because, you know, old Gunpowder likes to save his strength for when it’s needed. It’s not that I’m sleepy that much. I just know what I like in life.

But then the next thing I know the Scarecrow’s back and he’s jerking me back out into the cold and swinging one of those long legs over my back and flailing those limbs at me to turn me down the road. If he had asked, I could have told him the girth was loose, but he wouldn’t have listened anyway. People never do.

We carried on like that for a few hundred yards, with me trip-trotting along while the elbows and knees jostled around up there in some semblance of equitation, I suppose, until I felt like Ichabod’s focus was diverted and I dropped us down to a smoother walk. There. That was better for my back and my mouth.

We meandered along like that for awhile and I got to stewing over this clown on my back. Nobody stews like old Gunpowder. I just get to thinking, and I get to biding my time, and that’s how I get my way. This fellow on my back, who borrowed me from Van Ripper — not like that man was much of a horseman, but hey, I have a soft spot for that crazy master of mine — thinking he was some kind of — what, a cavalier? Some sort of country squire? Between jabbing me in the mouth and kicking me in side, there was a lot this fellow could learn about horses.

And then he started to whistle. If there’s one thing I hate, it’s whistling.

He must have been nervous about something, because his skinny little legs were clamped down on my sides and that whistle was mighty faint. And then he goes to kicking like the devil, flapping his arms like jerking on the bit is going to make me go any faster, and I see before me a dark shape on the ground. I only have one good eye, you know. It doesn’t slow me down, no sir, but sometimes stuff just sort of, you know, sneaks up on me.

So I dodged sideways, just until I could see what it was. And wouldn’t you know it, I bumped old Scarecrow’s legs off the fence, and he went to kicking and flailing even harder, and I had to leap the other way as he sawed down on my mouth, right into the bramble patch. Fool. If he could have quit waving his arms around for a few moments I would have been able to see we were just at the log bridge!

Now, I might not have two good eyes but I still have sense, and I could tell there was another horse there. I could smell him, hear him, feel him there, and even though I couldn’t quite tell who it was, I knew there was no sense in making a big fuss. I’m not so sure about Ichabod, though. We clip-clopped across the bridge past that other horse, my fool rider first sending me forward, then holding me back.

What did I say before — old Gunpowder bides his time. And I had waited long enough. When Ichabod went to kicking and flailing again a moment later, I decided it was time to show him how old Gunpowder got his name.

We were stride for stride, that big dark horse who was racing on my blind side. I could tell he was surprised, this dark horse, especially when I whipped up the other fork, past the road to the village, just to see if he could keep up. The cadence of his stride was familiar, but I couldn’t quite place who he was. It didn’t matter though — Old Gunpowder was still in the race!

We probably would have won except for fool Ichabod, who as I said had forgotten to check the girth of the saddle, and started sliding back and forth, back and forth, nearly tipping me over with all those arms and legs a-waving. We were drawing up to the church bridge and just as I was ready to revel in my victory, the Scarecrow tumbled right off and into the dirt, the saddle flying loose with him.

These are the moments that define a horse. I had options here: I could turn back around like a faithful steed and check on that fool, or I could keep on pressing this young dark horse keeping pace just a length back off my hip. I hesitated for just a moment, the slightest hesitation in my stride, weighing the options in my mind…

Nope. I veered off in front of the church, reins flapping somewhere around my knees, slowing down to a trot. I paused, just for a moment, to look back over my shoulder, realizing I hadn’t gotten a good look at that whippersnapper dark horse who thought he was going to beat old Gunpowder. I looked, then I checked again with my good eye, but the horse and his rider were gone.

In a Halloween mood? Don’t forget about our two great contests running this month: