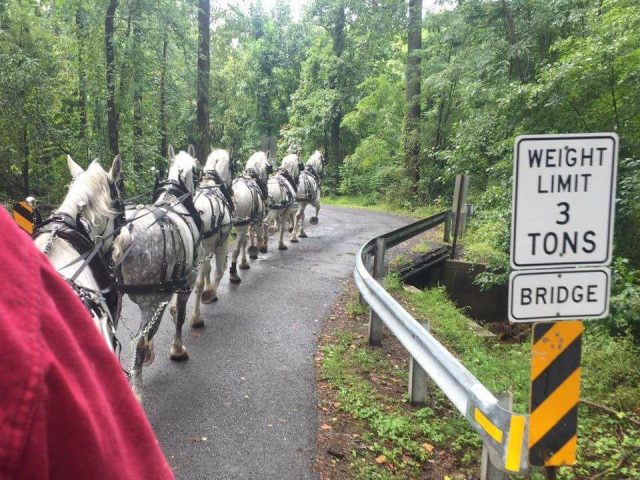 Six in line? An “unhitched” six? We caught up with Horse Nation’s draft horse hero David Rohrbach for the scoop on his latest daredevil hitch projects!

Any horseman who’s going to willingly hook up the so-called “suicide hitch” — that’s five horses hooked in a single-file line, also called the “single pentadom” for our more erudite readers — has got to be not only confident in his horses and his ability to handle them, but perhaps just a little tiny bit crazy too. That’s a quality we appreciate at Horse Nation, which is why David Rohrbach has long been our special draft horse hero: David and his Bee Tree Trail Percherons tackle the kind of hitches the rest of us could only ever dream of hooking up, from the single pentadom to a 15-horse “pyramid.” We caught up with Mr. Rohrbach to get the inside scoop on his latest projects — and you won’t believe what he’s thinking of tackling next.

The “Unhitched Six”… and more

The reason that any of David’s “experimental” hitches work out is illustrated in his unhitched six: trust. David knows and trusts his horses and they know and trust him; that mutual respect allows David to go above and beyond the usual standards of a working relationship with his Percherons. To demonstrate the trust that he and his horses have in each other, the Bee Tree Trail hitch can be found in coliseums near you performing this little number: 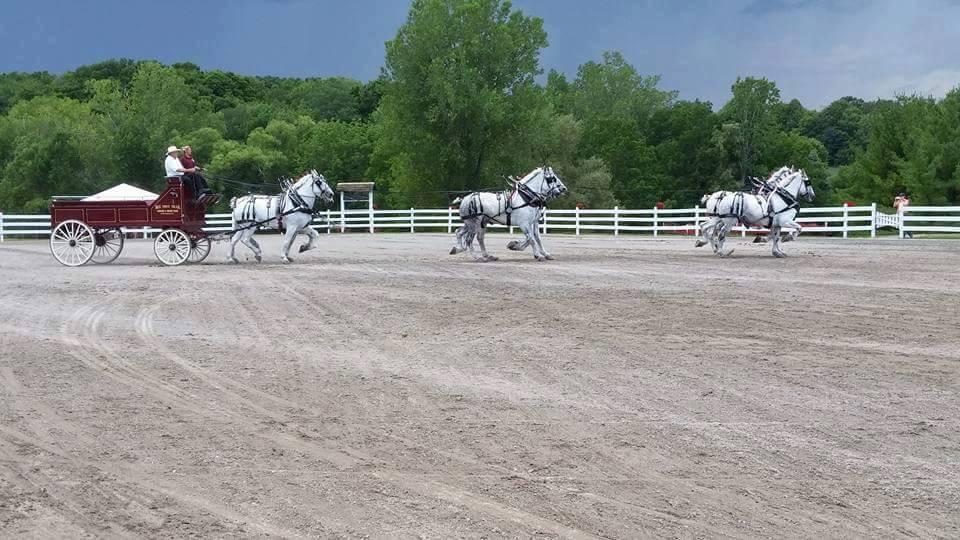 David calls this the “unhitched” six, demonstrating how the driver can still control each pair with the lines and his voice even without the swing and lead teams physically hitched to the wagon. While every driver of every hitch naturally wants to ensure he or she has this kind of control anyway, there’s a certain limit to how far horses can deviate when they’re attached at the tongue and the tug to the rest of the hitch. David’s unhitched demonstrations put the full range of trust and training on high-stakes display.

Upping his own ante, David’s also hooked his now-famous “suicide” hitch in the same fashion: only the wheel horse is actually attached to the cart, and in single-file the horses can’t rely on their partners for guidance. David calls the shots entirely. 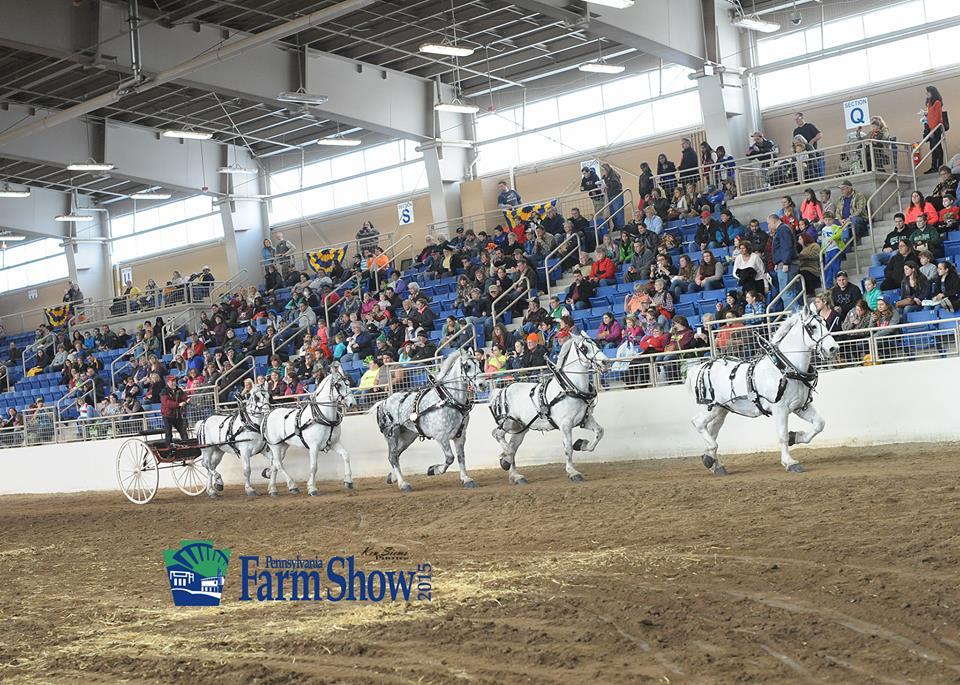 The lead horse or team in the stretched unhitched demonstrations can be as far as 64 feet away from David.

Not content to leave well-enough alone with the single pentadom, David’s latest adventure — on a back country road somewhere around Bee Tree Trail’s home base in Shartlesville, Pennsylvania — was the six-in-line, a single-file hitch of six Percherons happily marching down the road together. 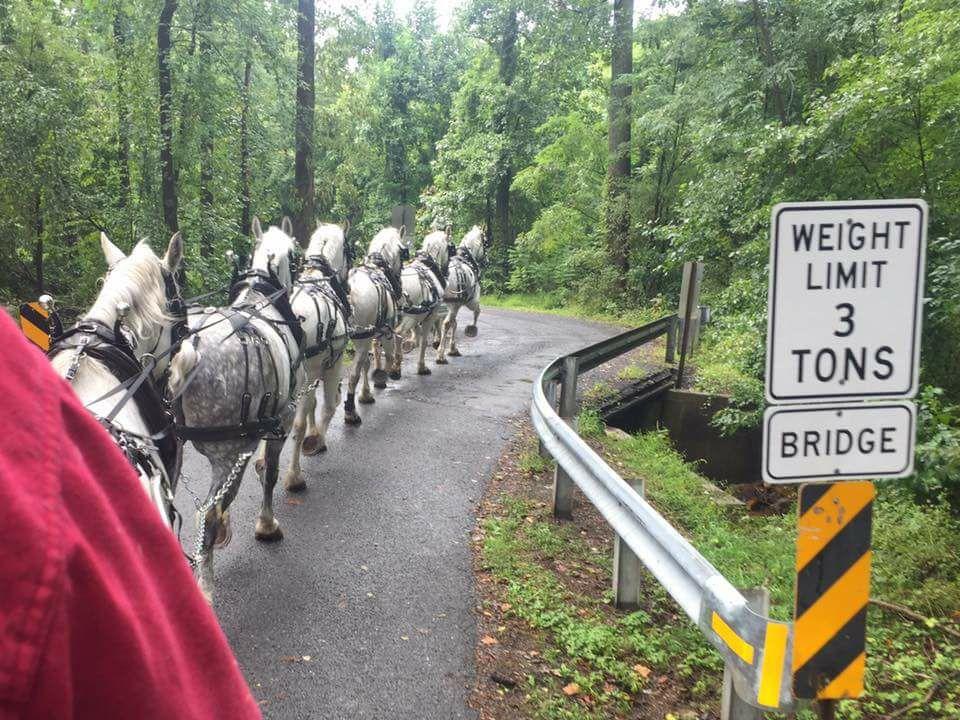 “Five lines is the most that any man can hold and control,” David told Horse Nation, no doubt envisioning a well-circulated photo of his own hands on the lines for the single pentadom. “These are custom lines so I can control three horses on one line.” 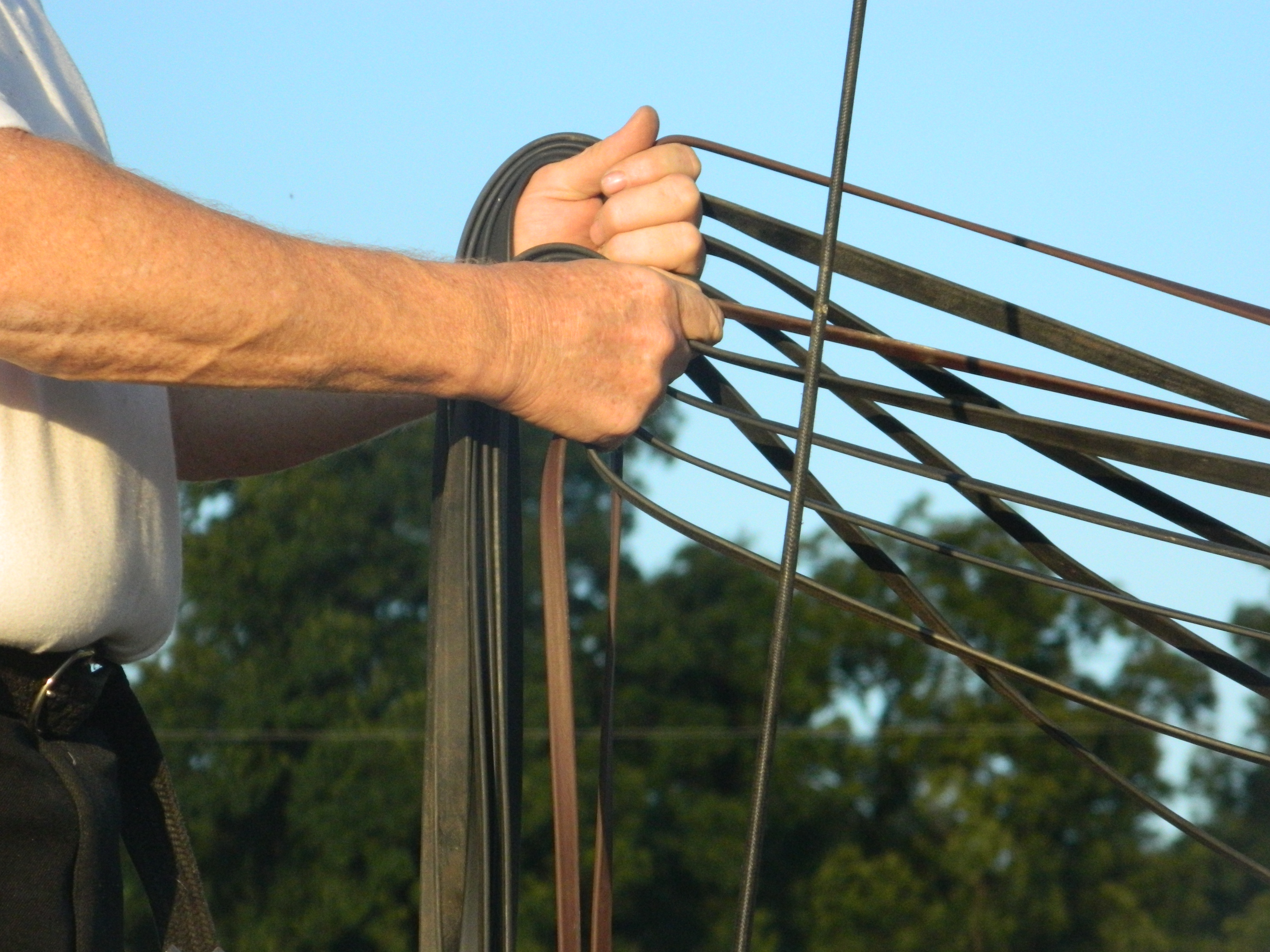 A bit of a handful with the single pentadom. Photo by Bee Tree Trail crew courtesy of David Rohrbach.

“The six in line is just the beginning of an attempt to do 15 in line. This was just a test of the line set-up,” David confided. Similar to his 15-horse pyramid hitch, David will need to borrow some horses, likely including once again horses that he trained at some point in their careers, to complete the 15-in-line. “I know someone did a 13 for a circus parade once, but I don’t know if anyone’s ever done 15.”

A 15-in-line would require custom lines aplenty — the distance from the lead horse to David could be about 160 feet. We wonder if a bullhorn might also be in the works to make sure David’s voice can be heard that far over the clatter of 60 Percheron hooves.

Still, if anyone’s going to pull off this hitch, it’s going to be David Rohrbach, and we’ll be cheering him every step of the way when it happens.

Learn more about David Rohrbach and Bee Tree Trail Percherons at his website. You can book the famous grays for weddings, prom, sweet sixteens or any special occasion!