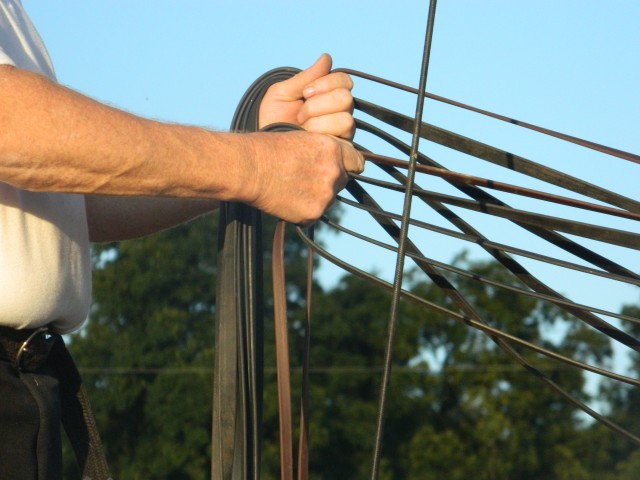 To our knowledge this Pennsylvania daredevil is the only driver to ever hook up the “suicide hitch,” among other unique combinations of don’t-try-this-at-home draft-horse awesome.

Remember that time I said the tandem was one of the most dangerous hitches out there? For most of us mere draft-horse-driving mortals, it is — and we’re content to stop right there with the single-file hitching of free-agent horses that weigh close to a ton each and like to trot with as much action as possible.

But then there’s Dave Rohrbach, who sees your single tandem and raises it one. Actually, he raises it five:

Called a pentadom hitch, or colloquially, the “suicide hitch” (for obvious reasons), Mr. Dave Rohrbach of Bee Tree Trail in Shartlesville, Pennsylvania is the only individual in the draft horse world who’s ever attempted this hitch (or at least documented it — pics or it didn’t happen, people). Dave Rohrbach is a professional horseman, training and showing his eye-catching gray Percherons as well as operating a wagon and carriage service. His famous and completely-custom Cinderella carriage has carried hundreds of prom dates, weddings, engagements, sweet 16s, and beauty queens to date, as well as such notables as Mark Wahlberg, Michael Keaton, Bam Margera, Akon and others all over the East Coast. You may have spotted Dave and one of his pairs on television; they’ve appeared on Extreme Home Makeover and My Big Fat Gypsy Wedding.

In between the celebrity escorts, the wedding circuit and a busy show schedule, Dave’s hobbies include trying out every unique and rare hitch pattern that exists — hence the pentadom/suicide hitch. One of his big claims to fame is the “pyramid hitch” — hooking 15 horses in a 5-4-3-2-1 pattern:

Dave’s hitch experiments arose first from his interest in trying the challenge of the random hitch (no, that’s not just hooking together whatever you want — that’s three horses traveling single-file). He gave that a try at the Farm Show Arena in Harrisburg, hooked to his famous Cinderella carriage. From there, he simply started adding horses — the four-horse quondam and then the pentadom. His show experience in the conventional tandem hitch as well as the bigger pair, four-up and six-up hitches to the big wagon led him to try a six-horse pyramid, also known as a V-6. The V-6, while not typically seen in the show ring, was fairly common as a teamster’s dare or challenge, which spurred Dave to go big or go home: he went to a 10-horse pyramid and then the 15. Interestingly, all but one horse in the 15-horse pyramid was either owned by Dave at the time or had been owned by him in some point in its career.

That’s a good thing for Dave, because these massive hitches require a lot of trust from horse to driver and back again. While huge farm hitches aren’t uncommon to see, especially in Amish country, driving show horses is another thing entirely — they’re bred to be a little hotter, to show a lot of action and really step out at the trot. Most farm hitches, even up to 46 horses, are driven with just two lines — the horses are tied in to each other in such a way that a farmer doesn’t have to worry about juggling more than a pair of line at a time. Dave, however, needs more control for his big and fast movers, so he has one set of lines per row of horses. If you ever think your one horse is a handful, get a look at what Dave’s got to put up with:

You may have also seen some of Dave’s other hitching antics, such as his “boxing the six” that made the rounds on Facebook for a while:

This performance stems from a photo Dave saw once of the Heinz hitch performing a maneuver in which the driver in his seat could pet the face of one of his leaders. This performance is also categorized as a “don’t try this at home” kind of a thing for draft people.

Understandably so, Dave Rohrbach and Bee Tree Trail now have a bit of a reputation to uphold: “People expect me to see me perform different things at different locations, such as at the Farm Show in Harrisburg. Every January, we’re on display for eight days and perform throughout the week[…] people love to watch you put it all together.”

Dave Rohrbach, HN salutes you in the name of equine insanity. Stay crazy, my friend.